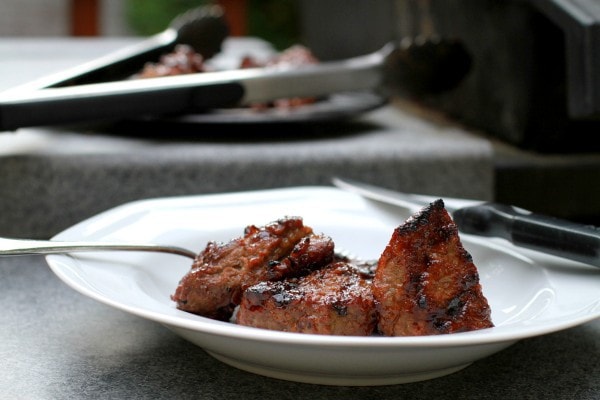 But when we buy a quarter of a cow, we sometimes get cuts of beef that are wholly unfamiliar to me. Short ribs are one of those cuts.

A couple of you said that they’re pretty expensive to buy, so my apologies for posting this recipe on a blog about frugality. While they might not be a very frugal purchase, for those of us who buy portions of a cow, it IS frugal to use up all the beef we bring home.

So, that’s why I’m posting it.

Having no idea how to prepare these bad boys, I browsed through my Cook’s Illustrated Cookbook

and came across a recipe for Korean Grilled Ribs.

This recipe calls for taking the meat and excess fat off of the rib bones, which is (not gonna lie) kind of a laborious process. The recipe then calls for cutting the boneless meat into slices and then pounding them to an even thickness.

This probably works great if your ribs are the predictable, uniform sort they sell at the store, but the ribs I had were very not uniform.

So, I deboned them as best I could and sliced and pounded them. But as you’ll see in a later photo, my finished meat wasn’t exactly neat and tidy.

Anyway, after you debone the meat, you make a marinade by blending up a pear with a number of other ingredients. This is a great use for a pear that’s gone a bit mushy, by the way.

The meat needs to be marinated at least 4 hours. 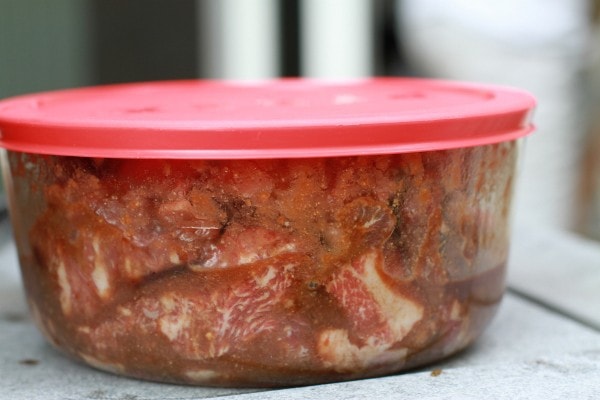 Heat the grill until it’s very hot (15 minutes or so), and then grill the meat until it’s browned on both sides, turning it often. 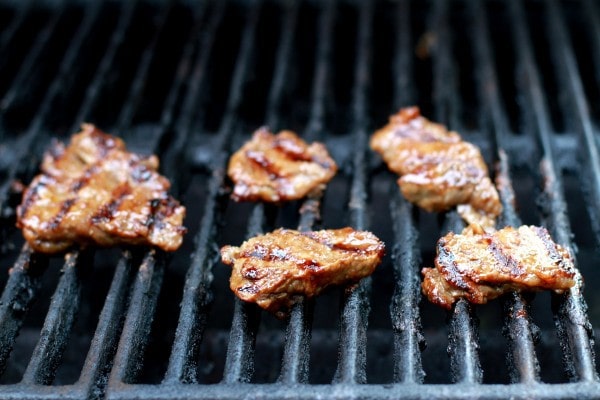 All six of us thought these were really good…I think the marinade was key. The pear gave the meat a nice subtle sweetness, and I’d definitely consider using the marinade for other cuts of meat. 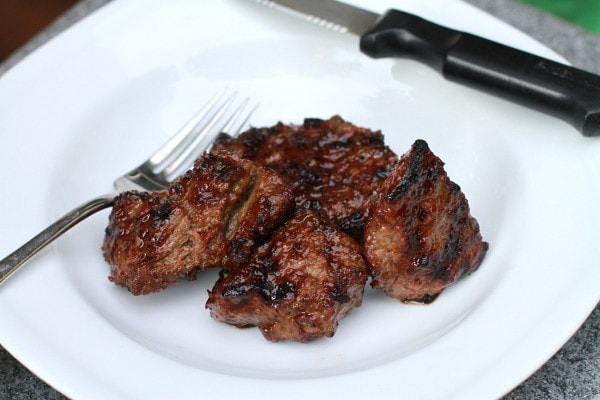 I still have more short ribs, and I think I’m going to try a slow-cooker recipe next. And then I think I will have successfully used up all the rib packages in my freezer. Sweet.

Combine pear, garlic, ginger, soy sauce, sesame oil, sugar, and vinegar in a food processor and process until smooth. Stir in the scallions.

Heat grill on high for 15 minutes. Place ribs on grill, and cook, flipping frequently, until both sides are well-browned.

Today’s 365 post: I didn’t take any pictures at all yesterday.

I am going to as a couple off friends if they would like to get together and purchase at least 1/2 a cow and plot it up. Most of us are small familys. It's 2 of us in our household. My son and me. So an entire cow, even half would be a bit much. But honestly, what they charge for good cuts of beef, I might as well buy a cow...or at least raise one to butcher...don't think our apartment owners wouldn't like that. But growing up and spending summers with my dad's family in South Carolina, cooking good down home southern cooking, I learned from the best. But beef short ribs are expensive and ox tails are too. I also used to buy little packs of lamb shoulder for really cheap. And when some of those chefs that went to culinary school if England, France...put some fancy sauce on it and the cheapest cuts skyrocketed to unaffordablity. Same thing with chicken wings. Used to be the cheapest part of the chicken. And then some bar owner threw some sauce he concocted, dumped it on some wings and the Buffalo wing was born. With that catching all the attention, prices of chicken wings hit space. Most of the affordable grocery stores get ground beef with so much fat in it, it looks almost white and by the time you cook off all the fat, you've poured off almost half a pound of that ground beef that you pay for by the pound. Hopefully now that the vegetarian/vegan revolution has emerged, meat prices will go down some for us carnivores. We have become a minority.

Grill short ribs, turning once, to desired doneness, about 3 to 4 minutes per side.

WOW, you have cooked Korean food! I am so glad it turned out great. Korean food seems to be little bit strange to ppl who don't have any Korean around. It took so long for my husband to get used to it. (In case you didn't know, I am Korean. =D)

You mentioned about using Pear marinading meat, I wanted to say more of the way Koreans do. We(Koreans) uses Pear or Kiwi for marinading meat instead of adding more sugar. It not only give sweetness but also tenderness. Kiwi could be used for quick marinading. You aren't supposed to marinade too long, otherwise it will make the meat too soft to cook. (The Actinidin in Kiwi will dissolve the collagen proteins in gelatin very quickly.) If you don't have neither(Pear or Kiwi), you also can use an apple with more sugar for longer period.'

I can send one of my recipe using short ribs in crock pot to your email, if you want. It doesn't require deboning, though my husband says he prefers no bone. He doesn't like the meat wrapped around the bone, which is kinda chewy and is a bit strange to eat to him. I got to find it first though..

Btw, I have been subscribing your blog for so long, never said anything before. BUT! Since I ma here talking... Thanks for sharing your ideas! I am a big fan of you!!!

I just made this marinade today for tri tip and it smells heavenly!

Thanks for the great looking recipe! We too purchase a quarter of a cow, and my few attempts at cooking the short ribs have been unsuccessful. We will definitely be trying this recipe! Thanks!