As you probably know if you have read any recent blog or Instagram posts, we recently had two windows installed in a wall that previously windowless. 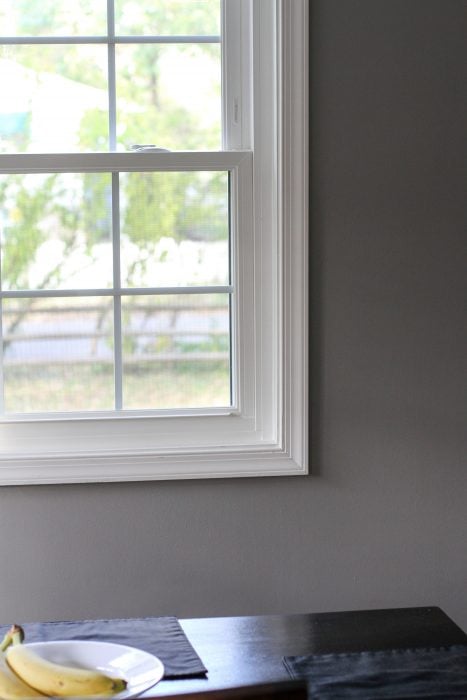 Some of you had asked for a post with more details, so I’m gonna do my best to provide all the pertinent info in this post.

First, how about some before, during, and after photos?

(One can never have enough of those, right??)

Here’s what the dining room looked like when we bought the house. Take in the scene, add a big dose of cigarette smoke smell, and you’ve got it. 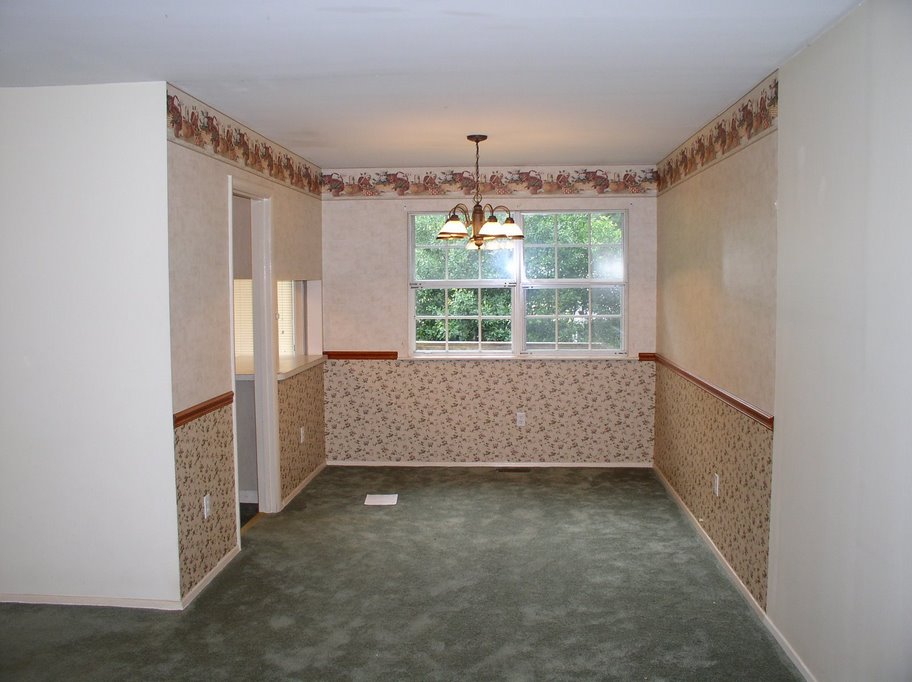 WHY so much wallpaper? No. No. No.

Here’s what it looked like once we removed all the wallpaper, painted the walls, and put new floors in. 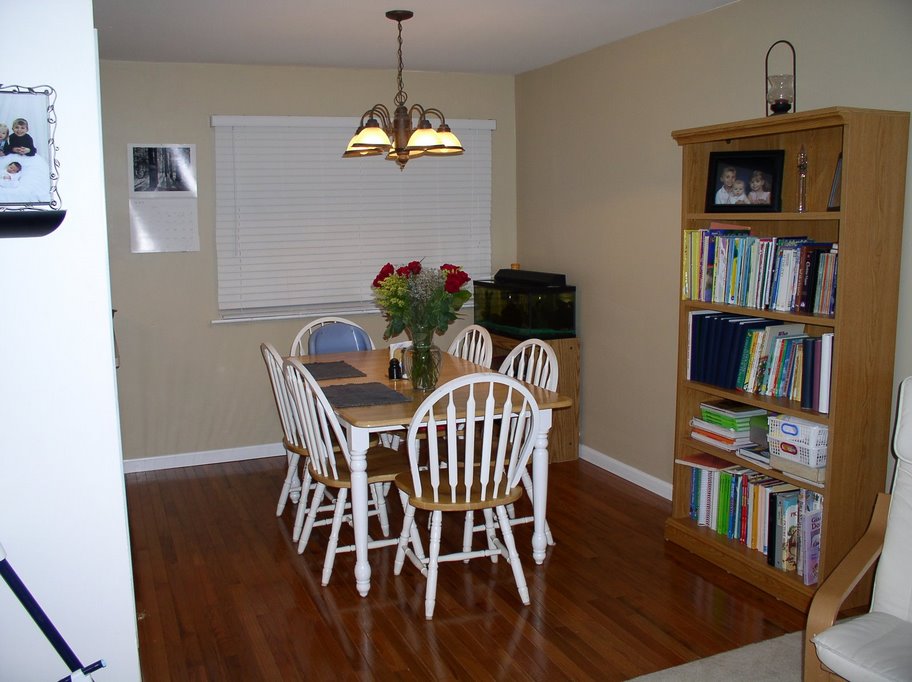 Then we cleared some of the extra furniture out, got a new light fixture, and added this candleholder that I spray-painted. 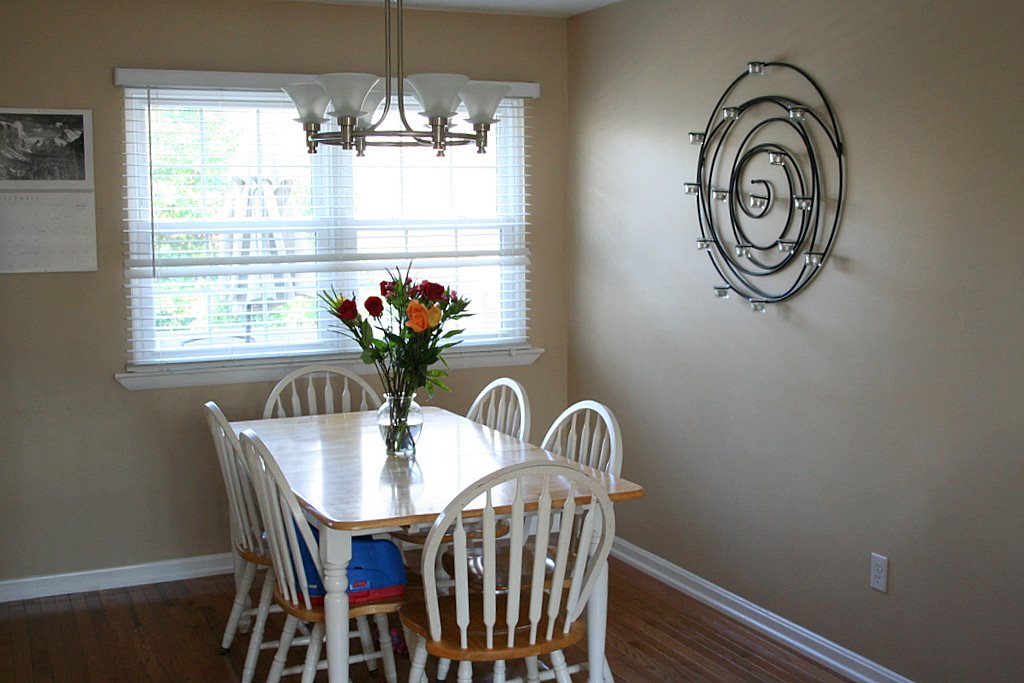 Over time, we painted it gray and added crown molding. 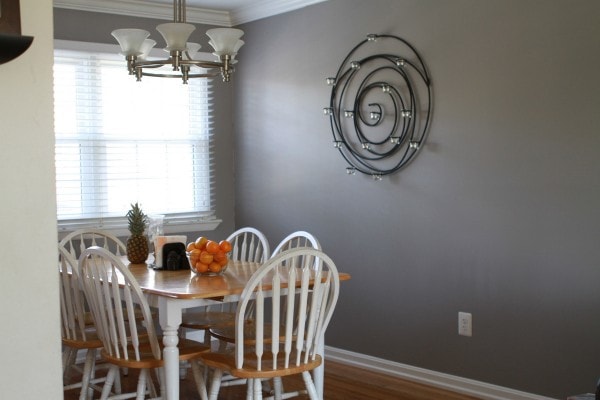 We got a bigger table too! 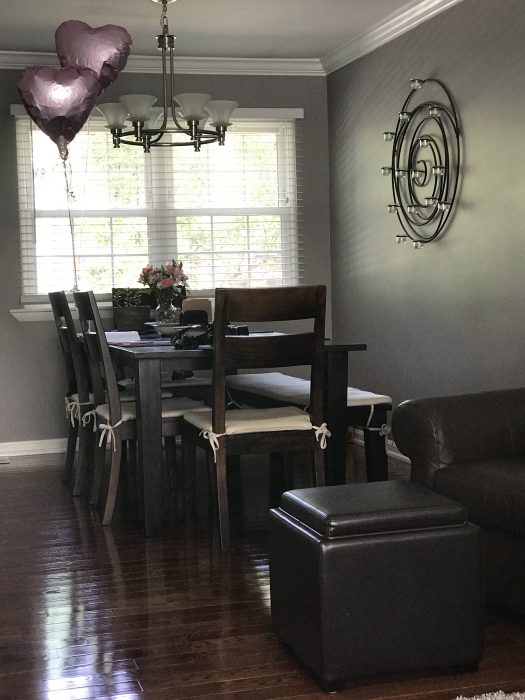 Time for a new window!

Here’s the wall before a cut. 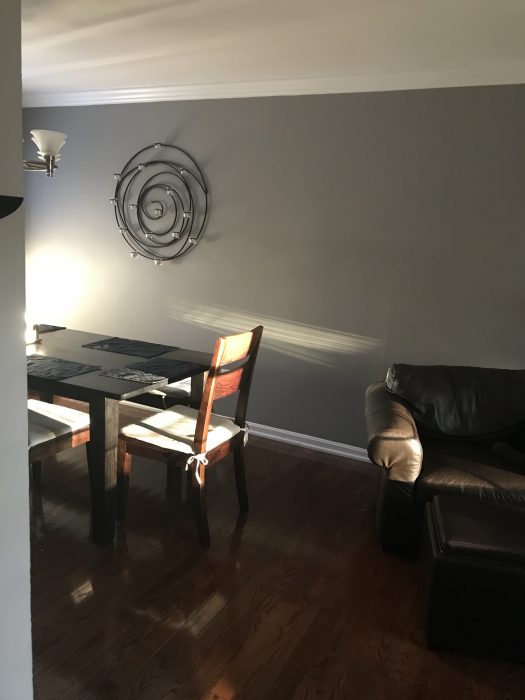 And with a cut. 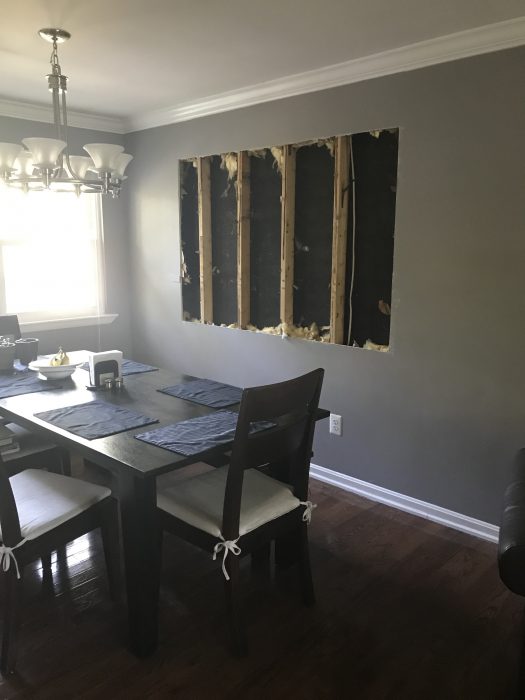 The first glimpse of outside light; so exciting! 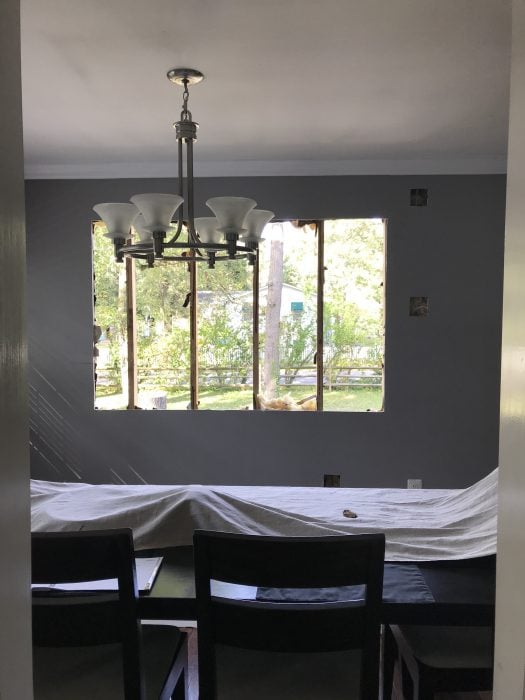 Next they put the frame in. 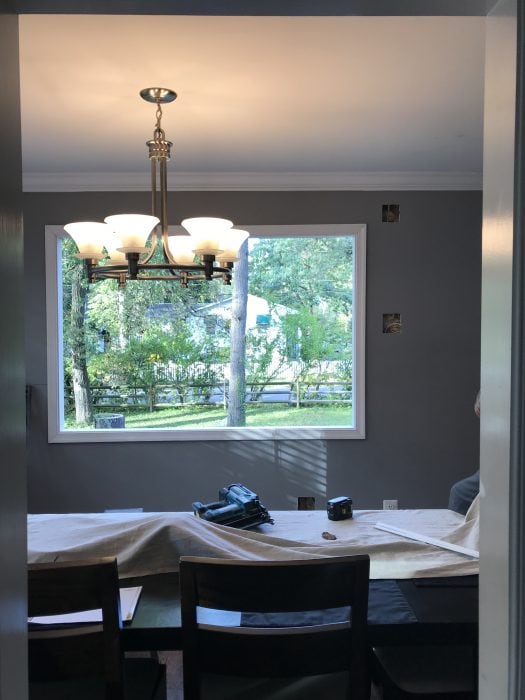 And then finally, the windows. 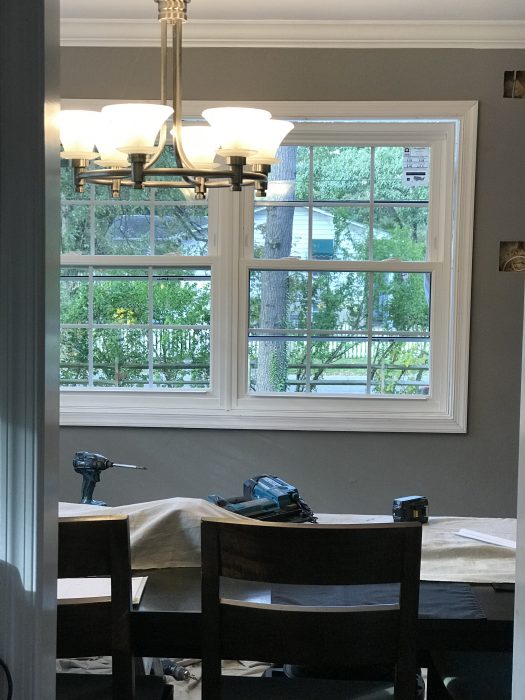 Once the window guys finished up, things were already looking pretty good. But there was still work to be done.

For one thing, see how the trim on the old windows doesn’t match the new? 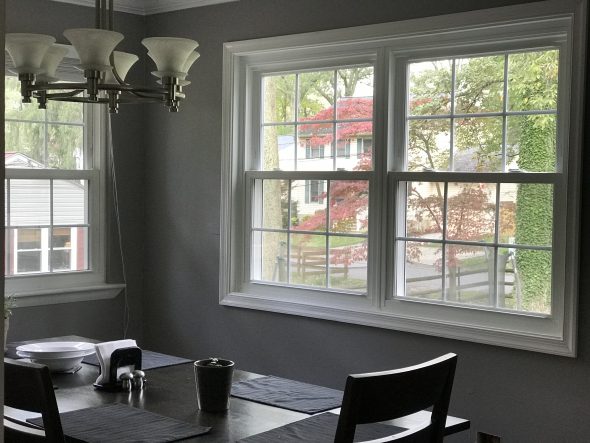 My dear dad brought his nailer, saw, and know-how over, and he took the old ledge out, cut it flush, reinstalled it, and then installed the new trim, which I’d just painted. 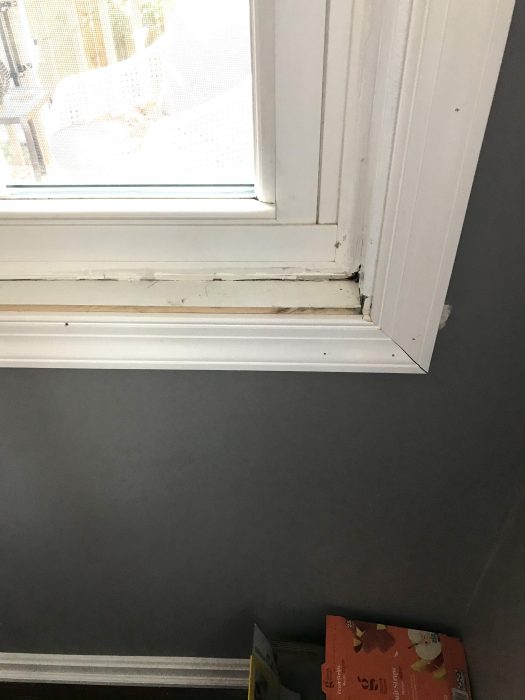 So then I did all the caulking, nail-hole-filling, spackling (a little drywall repair was necessary), sanding, and painting necessary to get all of that trim fresh and white. 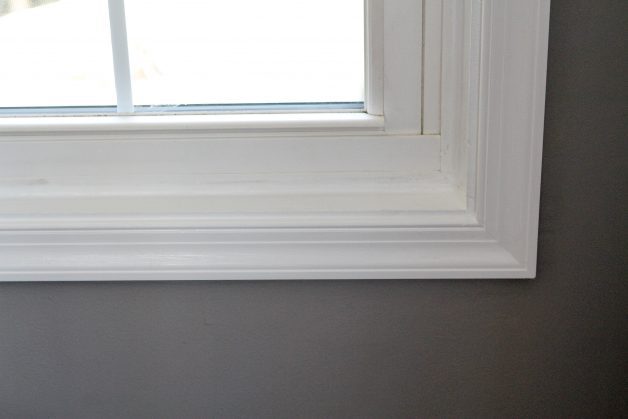 This is a very happy matching trim situation now. 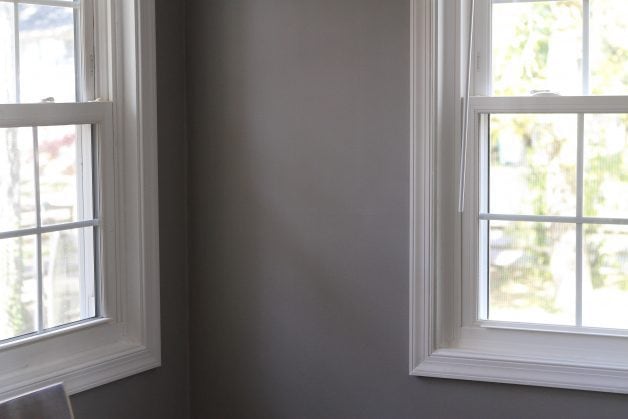 The other issue: the holes left by the electrician who moved the outlet wire.

See them on the right side here?

Mr. FG took the lead and patched those. 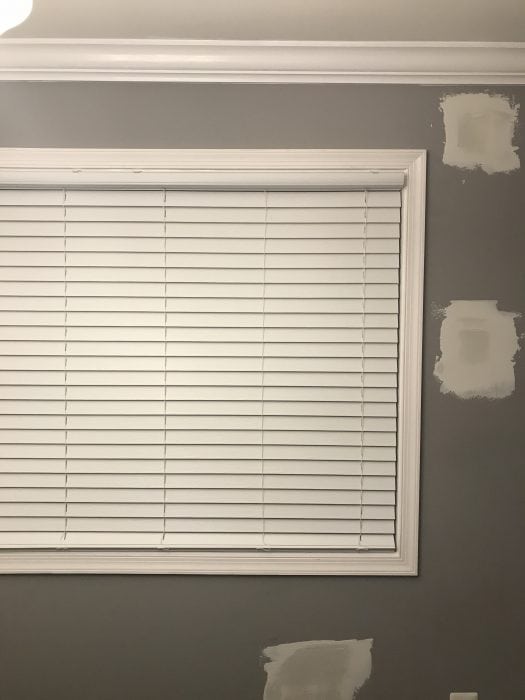 We also had to pound in some drywall nails that had popped loose during the window install and spackle those. 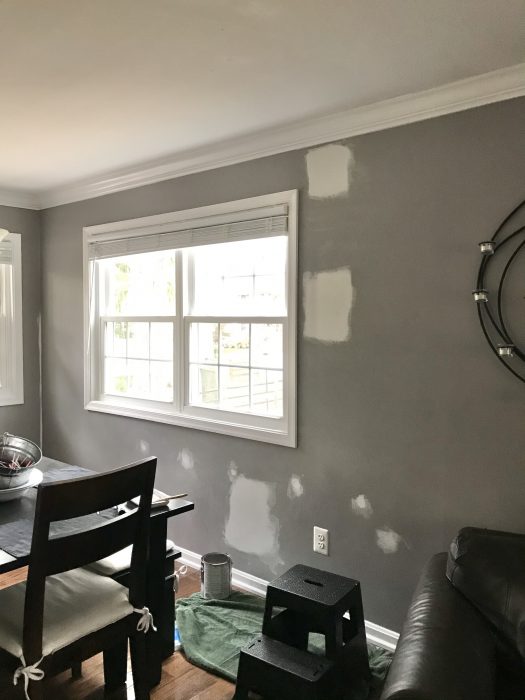 After several sand-then-spackle-then-sand rounds, I painted it all. 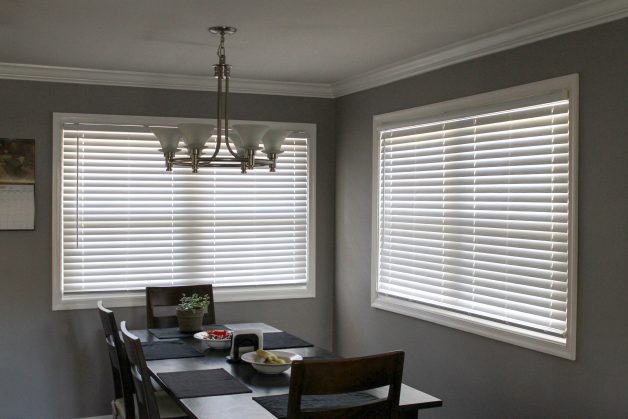 One last job…the drywall in the corner had split a little, so I caulked that and painted over it.

I opted to caulk because the caulk should be able to move as that corner expands and contracts as the weather changes. 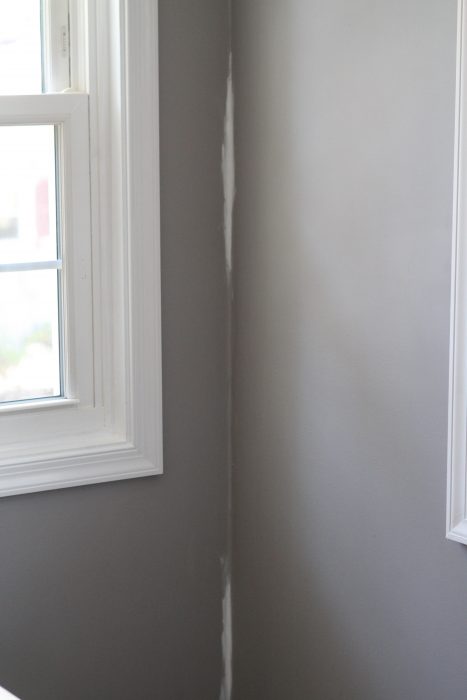 Apparently there’s some failure in the insulation there, but I am not about to tear apart the wall to investigate. Caulk is good enough for now. 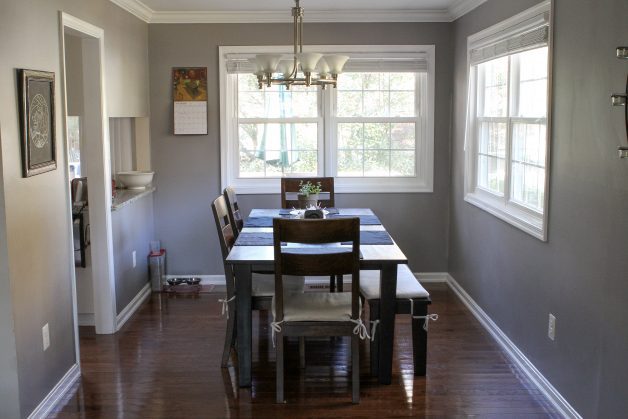 What made you think of this?

I really, really like natural light. I prefer it so much over light-bulb light!

Unfortunately, the north side of our house was built with no windows on the main living level. 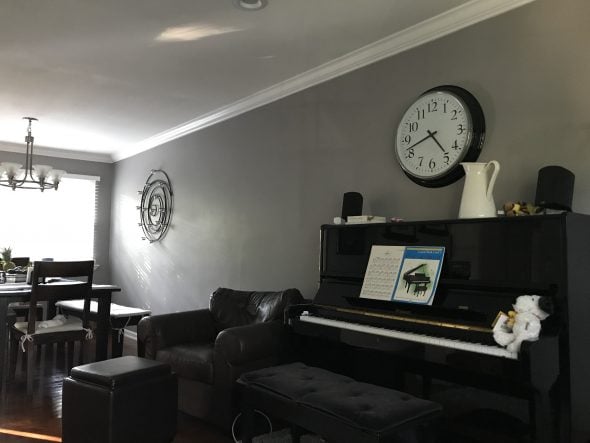 I don’t know why they didn’t add any when they built the house; there’s really no reason not to!

The north side of homes tends to be darker anyway, and with no windows, it really was a dark end of the house. 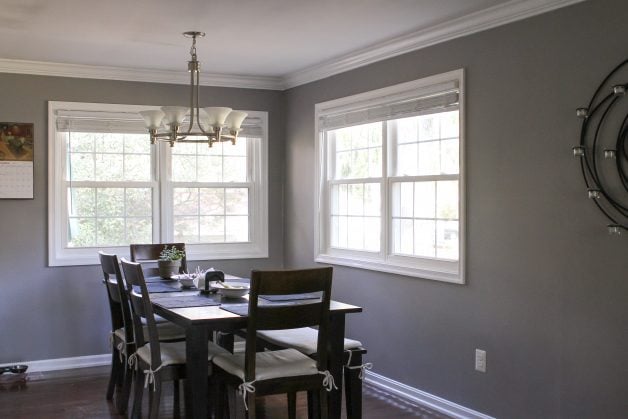 That windowless wall has been bugging me for a while, and since we couldn’t put a window where the piano is, the dining room was the obvious choice.

It’s been probably a good 8-10 years since the window idea first occurred to me. So you may be wondering…

What took you so long to actually get the windows??

This year, though, we had money in the home improvement fund, and Mr. FG took the initiative to get a couple of estimates scheduled.

How did you decide who to get estimates from?

In the past, we’ve gotten small jobs done by hiring people who do side work on the weekend.

But our usual source for these referrals told us he didn’t know of anyone he’d feel comfortable recommending to do a job like this on a side work basis (basically because you can do a lot of things wrong with a window install!) 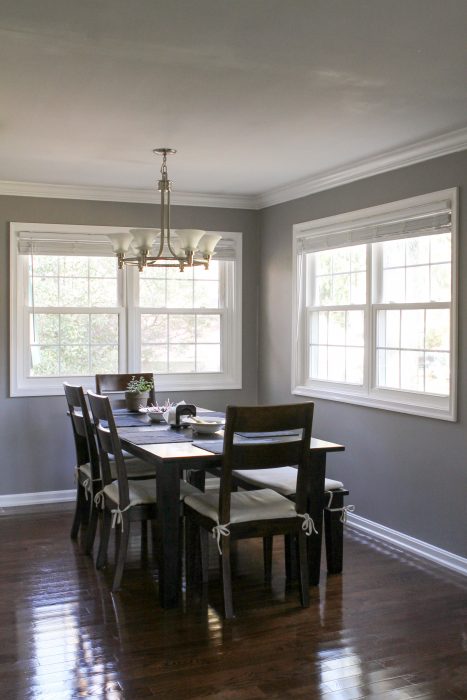 So, Mr. FG did some searching around online and chose a couple of companies to give us estimates.

We had a big window company come and also a very highly-rated small business, run by a Polish family who immigrated here.

The big window company’s estimate was almost twice the small business’s estimate, and since the small company was so highly rated and also much more affordable, we decided to go with them.

How much did this cost?

The total for the two windows, the electrical work, and the installation was $1550.

I really had no idea what to expect with the estimate, and at first, I was a little taken aback. $1550 is a lot of money for something that really was just for me.

(No one else was opposed to the idea of extra windows, but no one else felt particularly desirous of having extra windows. It really was my idea, for my own benefit.) 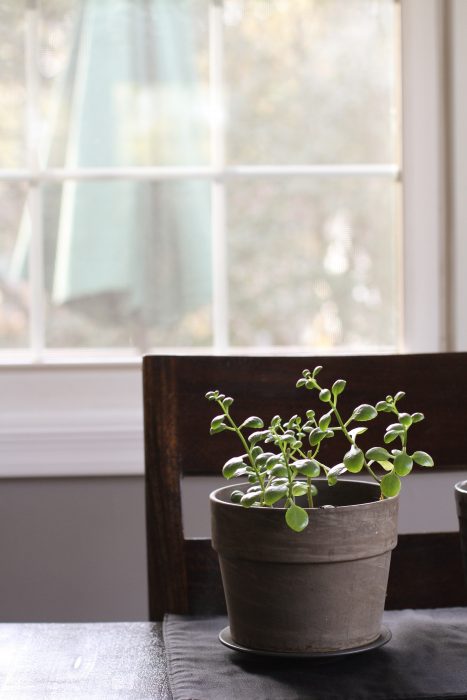 Mr. FG asked me how I felt about spending the money (he was good with it, since he is less of a saver than me!), and as I hemmed and hawed, Lisey, who was in the room, was like, “Mom. You pretty much never ask for anything, so we know that when you mention wanting something, you REALLY want it.”

Which is a very fair point. I don’t often come up with ideas that involve spending money.

But I have been wishing to have some natural light on that wall for a very long time, and we had the money in our home improvement budget to cover this project (while still having plenty left over for other repairs/maintenance that might come up).

It is true that I really, really wanted the windows.

Home improvement materials are sometimes on a pretty bad back-order schedule right now because of the pandemic.

But I figured, hey, I’ve been waiting almost a decade. What’s another few months?

The windows finally came in, and we got an install date.

But then it rained.

So we waited again.

Then the guys came, cut the hole in the interior wall, and discovered the outlet wire was running exactly the way they hoped it was not.

They hire an electrician to do contract work when necessary, and he ended up not being able to come for two days.

Then it rained again. More waiting.

And THEN finally we got a sunny day, and the actual install only took a couple of hours.

Was it worth it?

TOTALLY. I am really happy that we spent the money.

In fact, I’m not sure I have ever been happier with a home improvement project (and we have done a lot of them.) 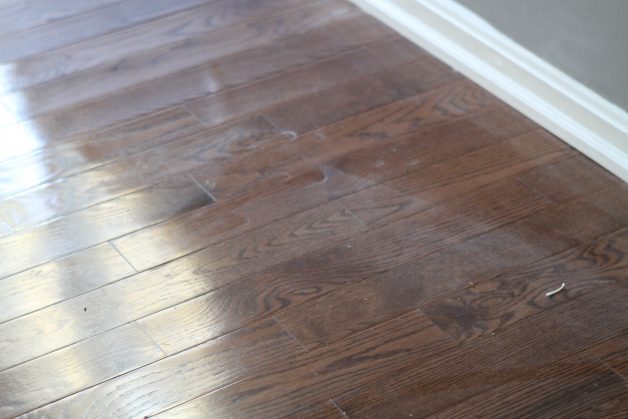 This has made a really enormous difference in how the whole main living area feels, and I am particularly delighted at the thought of having more light in the winter.

We are really happy with the small company we hired

All three of the guys we dealt with were great; very polite and friendly. The work was good quality and they even sent us a hand-written thank you note after the job was done!

I don’t think it would have been a wrong choice to hire the big window company, but it did feel nice to support the small business.

(If you are local to me and you want the company’s name, just email me.)

Hopefully I covered everything you were wanting to know, but if not, let me know in the comments!

It looks great! Thanks for sharing. I love “small improvements” that make such a huge difference.

What material is your house made of? Just asking because I’m wondering if it would cost more/less depending on if it’s brick or wood. I was thinking $1500 doesn’t seem too outrageous.

The lack of natural light in our house is really starting to bother me the older I get. Our front door is on the north side but there are no windows, and the one room on that level of our tri level has become our homeschool room and I’ve really noticed the need for more light. Our dining room is on the southeast side and I would love to replace the windows on the east facing wall and install French doors instead. There are no windows on the south facing side and I’d love to add a window. It’s so dark in the evening, and even with 4 floor lamps it’s still not enough. We aren’t ready to spend that kind of money but maybe someday.

This level of the house was siding, so that's pretty easy to deal with, I think. Brick would definitely up the cost!

I hate to say this yet I just have to because I am a builder.....judging by the area that was cut I can see no way a header was installed. A header is the main support system which is secured to a king stud and a crippler stud which is fastened to the ceiling and floor sill on each side of any opening on a bearing wall. All exterior walls are bearing; bearing means to hold weight in building jargon. Is there exterior work that was not shown? Was a permit pulled? Again I state this because as a builder I would of opened the wall (from at least one side) completely in the work area so that a header and studs could be properly installed (the hole would of been bigger than needed to do such). Also, if you where told the top was 'headed off' it is not the same as a header. Heading off is using two piece of the same stock lumber of the wall (ie. 2x4 wall means 2-2 x 4 where stacked to head things off) to hold joist together in a fashion so the support a hole opening yet this is no where near the size needed for a bearing wall. Standardized headers are 6 x 4 and larger; what is used is what standardized span states. In your case the span looks to be slightly over 6' so a 4" x 12" header should of been installed. This can all be checked at your local code department. So what happens on an opening when a header is not installed....well the wall will sag over time making the window bind yet the worst part of it all is if the opening is wide enough your roof can collapses (even more so if you have a two story); This is why I have concerns

Other than that the wall and new window look great. I love light in a home so understand totally how refreshing it is to have such.

Oh yeah, the picture I showed were not at all a complete view of the process! I only took pictures of the part that was interesting to me, and I didn't take any pictures of what they did outside. :)

The entire space upgrade is tremendous, so well done. I also think it was inexpensive for a home update project, and you've added future value to your house. Looks amazing!

Very nice. I have a room that is even worse than that but alas we can't do what you did as it is a party wall (semi-detached house) and so the window would open directly into next door's downstairs bathroom! So the room is where we have the exercise bike, piano etc. Things that are only used for specific periods of time.