I didn’t have time to write a blog post this weekend, and it’s already noon on Monday. So, here is a quick and rather random post, just so you have something to read. 😉 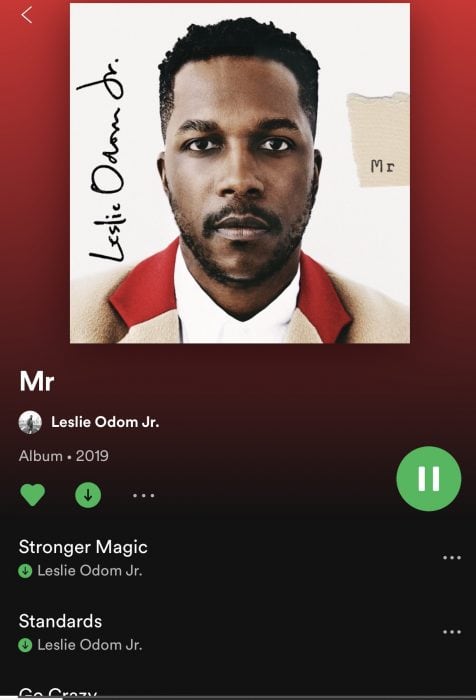 When I watched Hamilton with Sonia, I liked Aaron Burr’s voice, which, of course, is Leslie Odom’s voice.

So, I googled him and discovered he has some albums of his own. Sweet!

I’ve only listened to “Mr” so far, and I don’t like all of the songs, but there are several I really like.

(a few tracks have a little language, but you can just set your Spotify to not download tracks marked with an E for explicit.)

Since I’m in a different stage of life than Taylor, I don’t exactly resonate with the lyrics of her songs, but I do like the airy (and not so pop-y) sound of a lot of her songs on this album.

Quite a few tracks on this album are marked E, but again, Spotify’s filter is very handy. 🙂

Sometimes I need to work on my computer while Mr. FG has work meetings, and I find it to be very helpful to put earbuds in with an instrumental mix on Spotify.

I just cannot type words into a blog post while listening to his co-workers talk!

I finished this one, a reread because it was assigned for book club. It is just as heartbreaking the second time through, and I think it’s something every American should read at least once.

Bryan Stevenson is doing seriously amazing work to help people who have no voice and I cannot applaud him and his non-profit enough.

The Sun Does Shine

This one is written by Ray Hinton, a guy that Bryan Stevenson helped off of death row. This guy sat on death row for 30 years for a crime he didn’t commit. Can you even imagine the horror of that??

I just got to the part where Bryan Stevenson’s team has arrived to help, and I wanted to cheer.

Save Me the Plums

This is a memoir by Ruth Reichl, the editor of Gourmet magazine. I’m about halfway through, and so far, I like it, and I want to check out some issues of Gourmet now.

I have to say, though, reading The Sun Does Shine and Save Me the Plums at the same time is sort of weird. The problems that Ruth Reichl is facing seem so very small in comparison to Ray Hinton’s problems.

And the problems I face in my own life are definitely more similar to Reichl’s than to Hinton’s.

Hmm. I watched Hamilton with Sonia.

And I’ve watched some episodes of Criminal Minds with her as well.

I have to say, though, I like crime shows like CSI better. There’s less scary stuff on CSI (as I remember it) because they’re not usually actively chasing a killer. I’m kind of jumpy, and my goodness, Criminal Minds makes me jump every single time.

And honestly, I like shows such as The Crown better than crime shows. Give me all the period dramas!

getting my boating license

Not because I’m going to drive a boat, but because if I get my license, then I can go out on my brother’s jet skis with him or with Mr. FG.

I am learning some good information, but as with any licensing course, there are plenty of cheesy videos.

(Did you know life jackets make you look cool??)

Zoe and I tackled the laundry room, so I’ve been busy giving away stuff from that room. 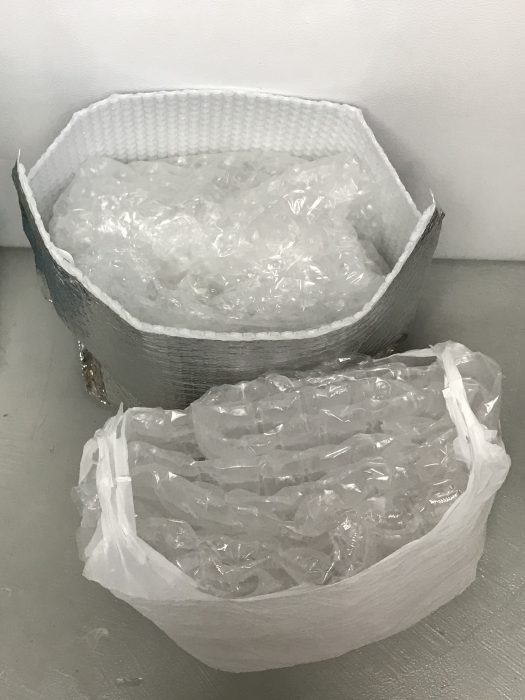 my extra bubble wrap went to someone in my community

And I helped Sonia get rid of a dresser she doesn’t need in her room. 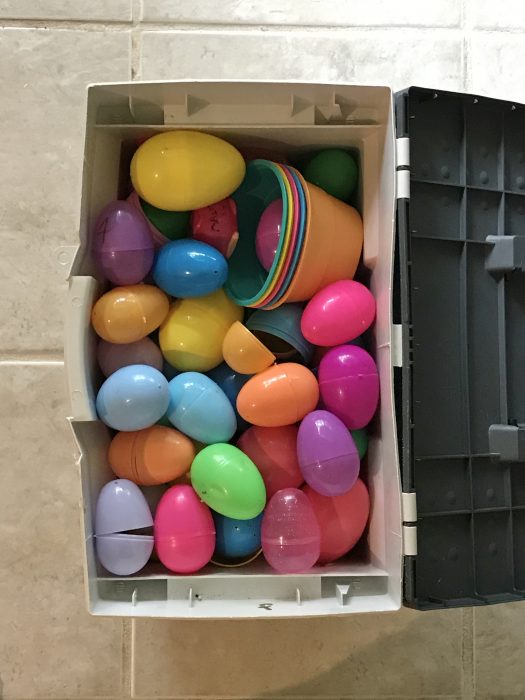 A moment of silence for the fact that my children have all outgrown Easter egg hunting. Time for the eggs to bless someone else!

I’m still shipping out books that are selling on eBay too.

On a related note, here’s how I declutter without creating trash.

What have you been up to lately? I’d love to hear!

I was so excited to find out we're eligible for the books by mail program from the state library and I signed us up for it last month. Then . . . the post office stopped working. Like, seriously. I have not received the books they checked out to me and mailed me over a month ago, and they haven't yet received the returns I sent back to them two weeks ago.

Of all that 2020 has required us to deal with, the troubles of the USPS is one of the most saddening for me.

Anyway. I re-read my copy of "The Witch of Blackbird Pond" last week, which I still love.

I got sucked into a YouTube black hole of those young guys that were shown reacting to a Phil Collins song from the 80s and watched a LOT of their reaction videos to songs that I remember from my own younger days. It's so fun to watch someone's jaw drop when they hear Evanescence for the first time or whatever. Plus, then I got to listen to a lot of music I had forgotten about.

We started school this week, though, so now I'm watching and listening to five kindergarteners all day, which leaves me with zero desire to watch and listen to anything else when I get home. :-)

Listening to... A podcast called Don't Make Me Come Back There by a comedian who talks about funny family stuff and my Bible in One Year app. Reading... I just finished "The Office: The Untold Story of the Greatest Sitcom of the 2000s: An Oral History" by Andy Greene. I started it on our camping trip and it was a book that I could read, get frequently interrupted by my kids, and still keep track of what was going on. I made it to chapter 8 of "The Jane Austen Society" by Natalie Jenner before I had to return it to the library this week. Since that one required focus, it turned out to not be a good one for the trip. I may check it out again in a week or so to finish it. Watching... I re-watched the first half of The Greatest Showman which turned out to be a weird experience. We attended a fundraising auction themed off that movie on the last weekend before the pandemic hit, so every song just reminded me of that last weekend of normalcy. And since the kids picked a DVD from the library, I'm also watching Paw Patrol. Ha! Working on... My garden. Trying to keep up with the green beans and peppers and I think I'm less than a week away from canning my first batch of salsa.

Greetings: I am interesting in hearing about your book club? I am in a club here too and we are having issues about meeting and all. We have decided to meet this September so we could pass out our new books for the year. I had the wonderful opportunity to pick out the books for the year and boy was it ever a job and a half. I did not get help because of the corona virus and all. We select 12 Fiction and 12 Non-Fiction books for the year and we pass books on the 1st and the 15th of the month. We have 24 members so we read 24 books in a year which has been fun for me. I have enjoyed reading a wide range of books from new authors and all. I have picked, "Just Mercy" for us to read this year, yes it is a great book and I enjoyed the movie too. We also had the book, "The Son Does Shine" it was an awesome read and I cried a whole lot as it broke my heart when his mom died. Oh well take care. Please tell me about your book club and what you are doing with this Covid 19 going on and all. I really enjoyed today's read from you. Have a great day!!

We've just been meeting via Zoom ever since the pandemic started. It's not quite as fun as in-person, but it's certainly better than no book club at all!

Just finished a grueling week of overtime. My job is usually in an office, but this was outdoors for six days working an event in 90-plus degree heat. The proceeds will go to pay for an expensive repair to our garage door.

I made a "mix tape" on a memory stick of favorite songs from the 80s and 90s to listen to while commuting to work.

Oh wow, that many days in the heat would be so exhausting.

Lisey's automotive job is not air-conditioned and when she's working down in the pit, she gets so terribly hot. She drinks Gatorade like it's going out of style, and still has trouble staying hydrated.

My music varies, when I need to clear my head it’s The Moody Blues. My latest reads Into Thin Air -Krakauer Mt Everest book. Then I watched some history specials on the countries that host those wanting to climb. Their living conditions are so poor. How To Be an Antiracist by I Kendi. Currently reading To Kill a Mockingbird while waiting for the Alex Trebek book The Answer is. I tore everything out of my kitchen cabinets and reorganized. I have a lot of cupboards but they are all such weird sizes. Non adjustable shelves. My brother gave me a ton of tomatoes spent a day rehoming some, cooking and freezing them.