Like most of you, I’d heard for years that regular deodorant/antiperspirant is possibly not the most healthy thing to be putting on my armpits. But I felt rather stuck because heaven knows I am a sweaty person.

Even WITH regular deodorant. 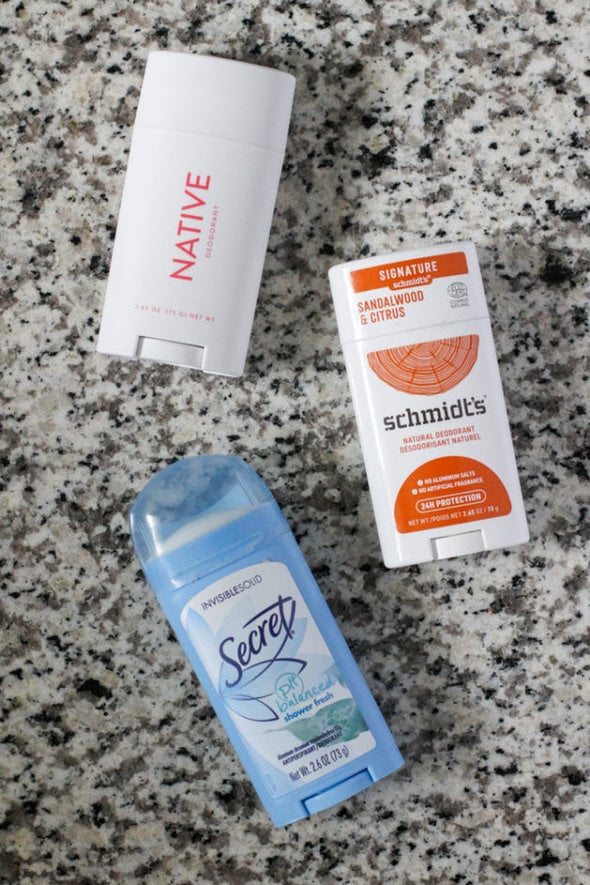 So, I couldn’t imagine what I’d be like without it.

I’d tried some natural deodorants before (Primal Pit Paste, to name one!) and my experience was…stinky. Bleah.

My friend Beth encouraged me to try an Arm and Hammer deodorant that was more natural, and she said if I stuck it out through an adjustment period of a couple of weeks, things would get better. 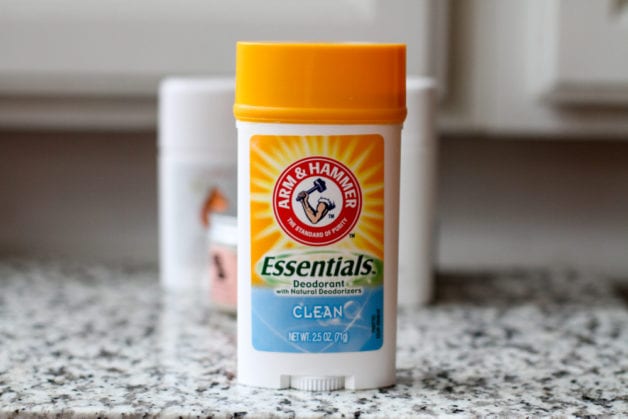 I did, and she was right! I feel like the stink got worse for a while, but then it improved and I felt pretty pleased with the results.  It wasn’t perfect, but I was certainly no more sweaty than I was with regular deodorant/antiperspirant.

(A doctor quoted in this Real Simple article says you need to allow a 3-4 week adjustment period.)

It’s been four years now since I’ve switched, and I have fewer sweat issues than I did before I switched.  I don’t think I’ll ever go back to regular antiperspirant!

How does natural deodorant work?

Underarm sweat does not actually smell bad on its own; the stink comes from bacteria on the surface of the skin.

Underarm skin contains apocrine sweat glands, which generally don’t begin secreting sweat until puberty. According to my Anatomy and Physiology textbook, this particular sweat provides food for the bacteria in the underarm area, and that bacteria is what causes the underarm funk.

(What a mercy that we don’t have these particular sweat glands all over our bodies. Imagine if our forearms had the potential to smell as bad as our underarms!)

Bacteria love to be warm and wet, of course, so natural deodorants usually include ingredients that are meant to keep you dry (like baking soda) and also fight the bacteria (for instance, coconut oil is antibacterial).

Antiperspirants actually block the sweat ducts, whereas deodorants work only on the surface of the skin. 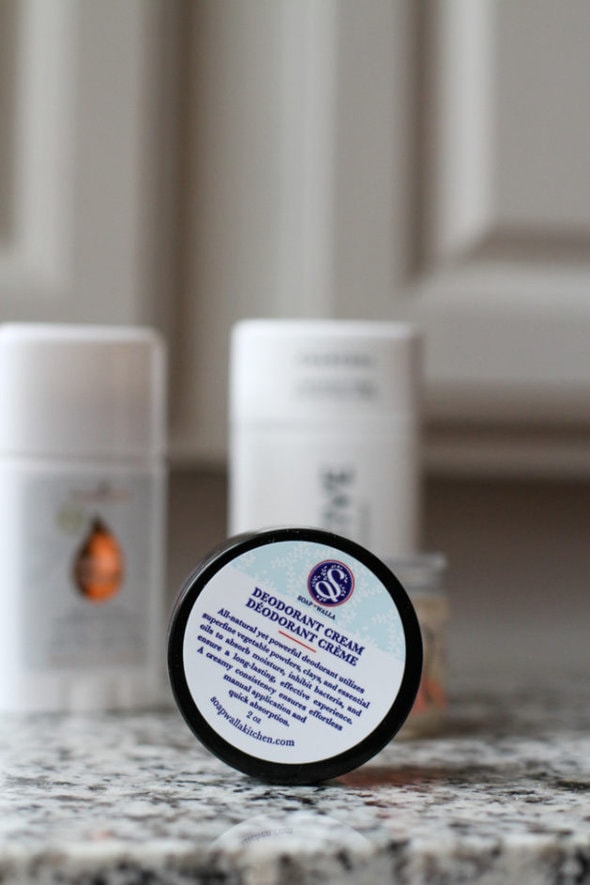 It’s safe for my body. I’m not artificially preventing the release of sweat, and I’m not putting potentially harmful substances on my skin.

My shirt armpits are cleaner. I didn’t realize that a lot of the residue and buildup on my shirts was actually deodorant, not sweat! Also, the yellow stains that white shirts get? Apparently, those are from deodorant too!

It’s easier to wash my armpits. Regular solid deodorant is a little hard to scrub off, even on skin.  But the natural stuff comes right off.

Overall, my armpits are drier. My traditional antiperspirant wasn’t really keeping me very dry! Ever since I got past the adjustment period, I have found that I am dealing with less armpit sweat than I ever was before.

Nothing is perfect. 😉 So…

It doesn’t last as long. I sometimes need to reapply later in the day if it’s been a particularly hot one.

It doesn’t hold up to workouts quite as well. This doesn’t bother me a ton because I work out at home mostly. No one else has to smell me!

Some brands leave oil stains on shirts. This effect is pretty faint, and it can be removed during laundering, but I still thought it should be mentioned.

Reviews of the deodorants I’ve tried

I’ve given a whole variety of deodorants a try, so I figured a run-down would be helpful.

This stuff did not work for me at all; I felt greasy and sweaty, and I threw my container away. Thumbs down. 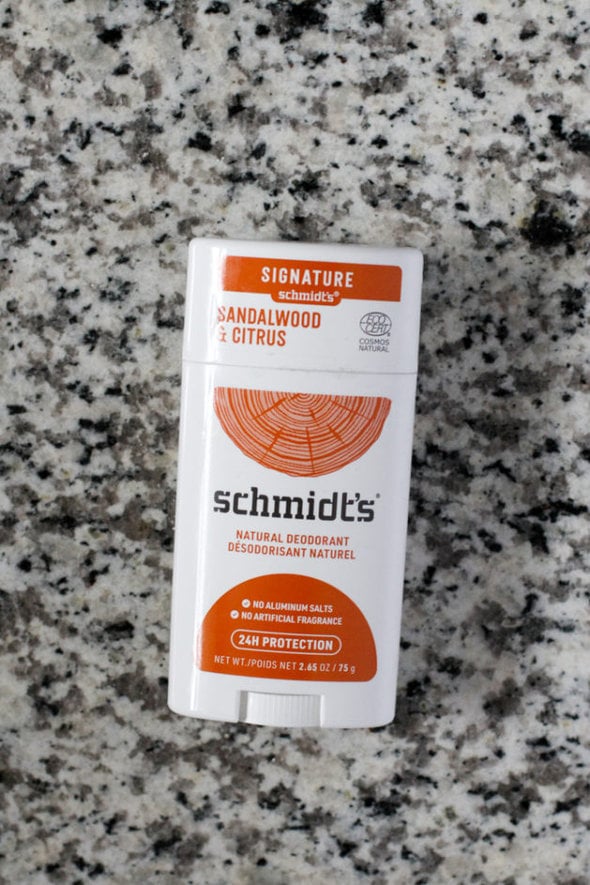 I wanted to like this one; it smelled good, it came in a handy dispenser, and I’d heard good things about it.

But nope; it doesn’t do a great job for me, and the texture of it is a little too soft. It made for a messy application experience.

This does not contain antiperspirants, but it does have a few ingredients that are not considered to be 100% natural.

However, it’s inexpensive, easy to apply, and maybe a good thing to first try as you move away from antiperspirant deodorant.

This comes in a little jar and you apply it with your fingertips.

It works great, is made of completely safe ingredients, and lasts forever (which makes it quite affordable).

However, it can get a little annoying to keep applying deodorant with your fingers.

And it contains baking soda, which can be a problem for sensitive skin. 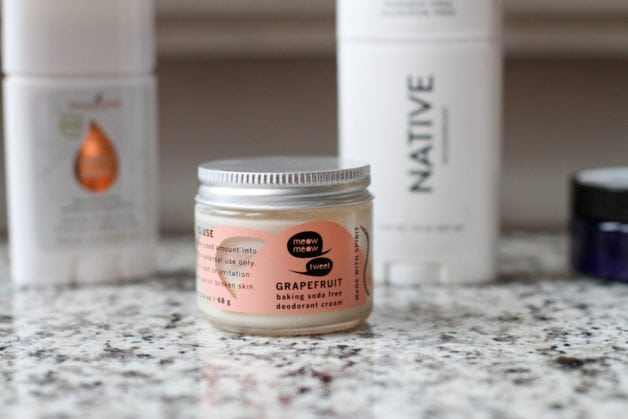 It’s free of baking soda, and I think it works as well as the Soapwalla deodorant. Definitely a good option if you have sensitive skin.

I bought the glass container, which you apply with your fingertips. But I see you can now get this brand in a stick deodorant too, which is handy. 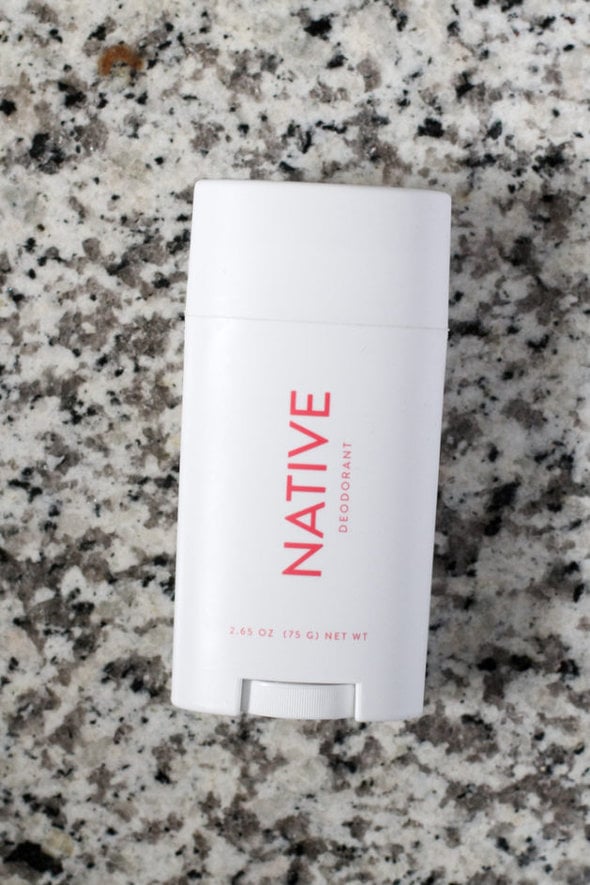 I ordered some of this after getting an in-the-mail coupon, and I have to say, I love it.

It’s as natural as can be, it works great for me, and it comes in a traditional deodorant dispenser, which I love!

Native makes several varieties of deodorant without baking soda, so check those out if you are sensitive.

Have you tried natural deodorant? I’d love to hear about your experience!

P.S. For the record, I think deodorant choice is not a matter of high importance, healthwise. My guess is that many other things, such as sleep, physical activity, and a balanced diet, have a much bigger impact on a person’s overall well-being and health. Deodorant is pretty minor, and I don’t think anyone should feel terribly stressed if natural deodorant is a no-go for them!

Better late than never! I switched to Arm & Hammer years ago and I like it. Sweating is a natural body function and I don't like the idea of stopping it with all the chemicals other brands contain. It took a few weeks to get used to but I am find now and glad I did.

I also switched to natural deodorant several years ago. I love it! I primarily use Schmidt’s as it tends to keep me smelling nice for longer but I also use native, especially in less sweaty days. I started with native when they had a subscription service and then switched to Schmidt’s which I can often find for a reduced price at TJ Maxx.

I even made my own deodorant at one point to reduce on price and packaging, but I didn’t stabilize it with Shea butter so it was a bit oily and causing some stains on certain fabrics, so I haven’t bothered with it any more and use it sparingly to use it up, only worn with loose fabrics or sweaters.

I recently started experimenting with different ones, schmidts was ok but then I found smarty pits in a almond biscotti scent that I LOVE!! It works really well and the smell is amazing! Sometimes I reapply just because I like the smell lol. Then I can't find this scent again anywhere but it has worked superbly and is very afforable. At my local store I found it for roughly $7. When I looked up on Amazon and Walmart it was $12

I bought my first Native through your link, and I am impressed! At the end of this 99° day, I am still smelling like buttercream frosting, no joke.

For years I used an antiperspirant containing aluminum.With concerns about aluminum & other harmful ingredients I looked for alternatives. For a while I used Toms but by the end of the day I could smell myself. I ordered a Crystal and have been pleased with it. You do have to be careful about dropping it but it works. I also ordered DeodoMom made w magnesium & it also works well & is easier to pack. I forgot to pack any deodorant on a recent trip & bought Ivory gentle deodorant, no aluminum or parabens. It also works well.