I’ve been promising for days to show you some of the homemade and thrifted gifts we gave this year, and today, I’m actually going to follow through!

For Zoe’s Build-A-Bear (er, Build-a-Dog, as Zoe likes to point out), Chloe, I crocheted a scarf. Sometimes at night, Mr. FG reads out loud to me, and I do some sort of mindless busy-work, like ironing or folding laundry. In November, I spent that time making a scarf. 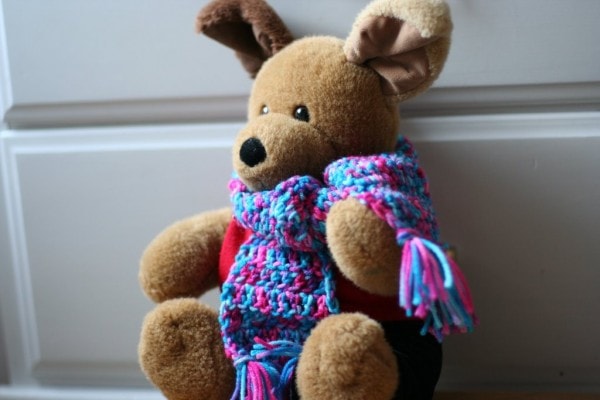 I actually pay attention better when my hands are busy, so crocheting is a perfect activity for me…I get something done and I absorb more of what Mr. FG is reading to me.

I also made a pair of pants for Chloe out of the sleeve of an old dress of mine. I think they turned out pretty well…the only mistake I made was not leaving a hole for Chloe’s tail. Whoops. 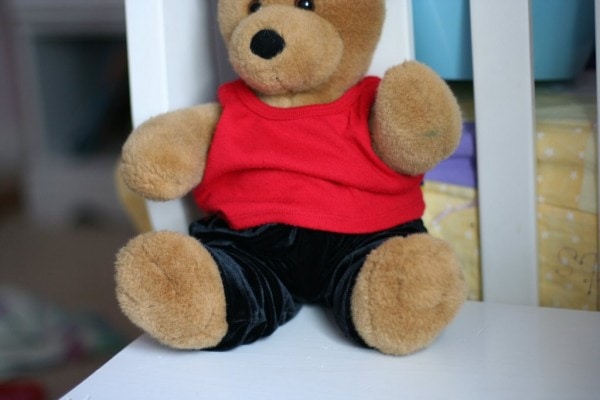 I looked online to see if I could find some Build-A-Bear patterns, but came up with nothing, so I just sort of made this up as I went along, and I used Joshua’s Build-A-Bear hockey pants to get sort of a vague idea of proportions.

From the same dress, I made a dress for Lisey’s bear, Anne-Marie. 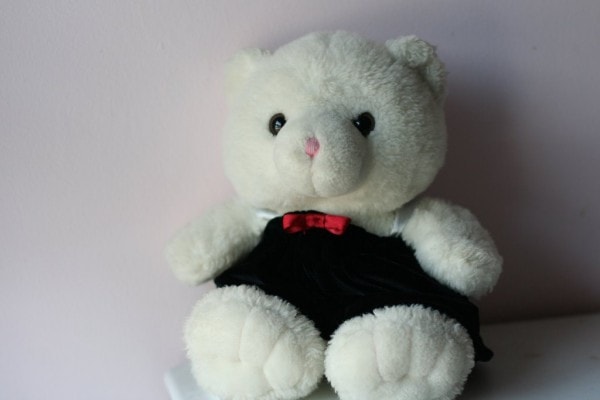 For the straps, I used some ribbon that I’d salvaged from a shopping bag. 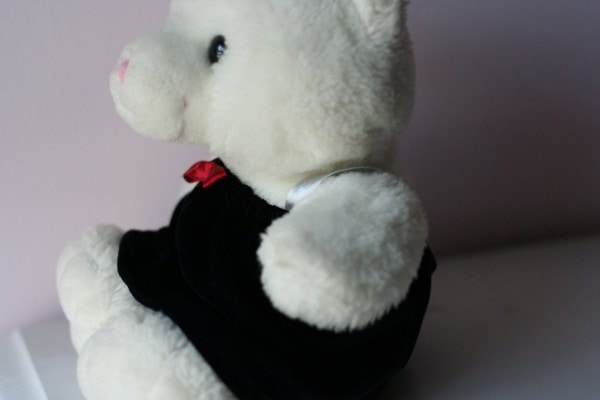 The dress straps can be tucked inside so that the dress can be used as a skirt. Except we realized that poor Anne-Marie doesn’t own a shirt, so for now, this is solely a dress.

For Sonia’s bear, Sniffles, I made a scarf. I think I crocheted this one during Mr. FG’s and my reading sessions in October. 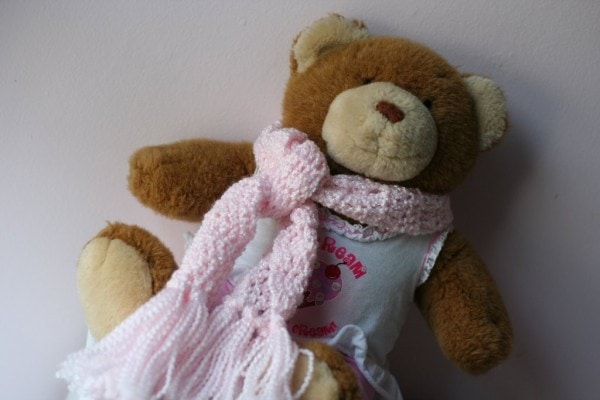 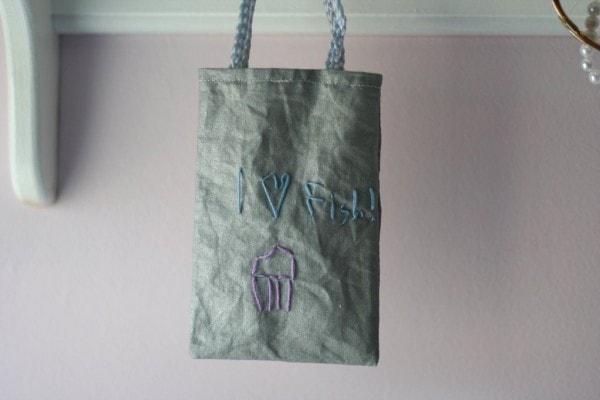 He stitched the designs on either side, and I sewed it into a bag (using, you guessed it, cord that I’d saved from a shopping bag with corded handles). 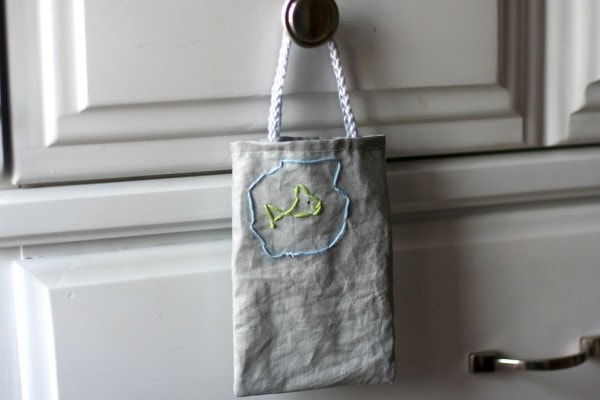 Lisey made a fish bag for Zoe using one of Mr. FG’s old shirts. The fish on this one is a Mola Mola, the same fish that inspired Zoe’s birthday cake last year. 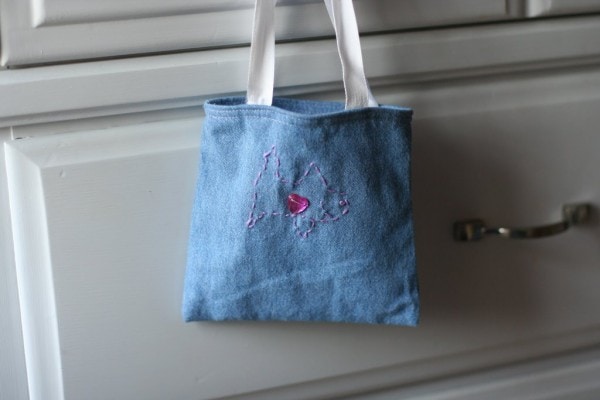 She used some more of that fabric to make a pillow and blanket for Zoe’s little whale. 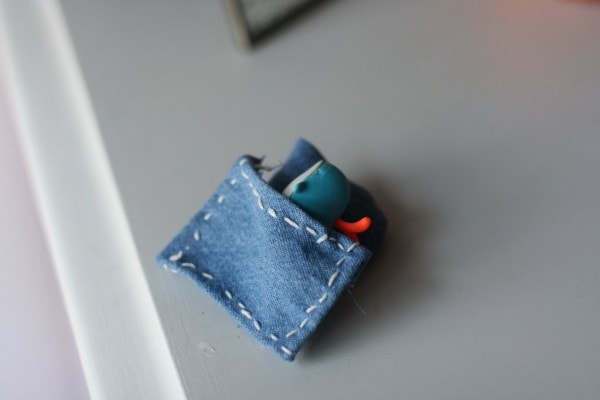 And now for some paper crafts. Since Mr. FG and I both feel that the value of a card lies in the note inside, we don’t usually bother buying cards for each other, and instead we make our own.

I made a card for Mr. FG out of paper scraps and some clearance stickers I had in my drawer. 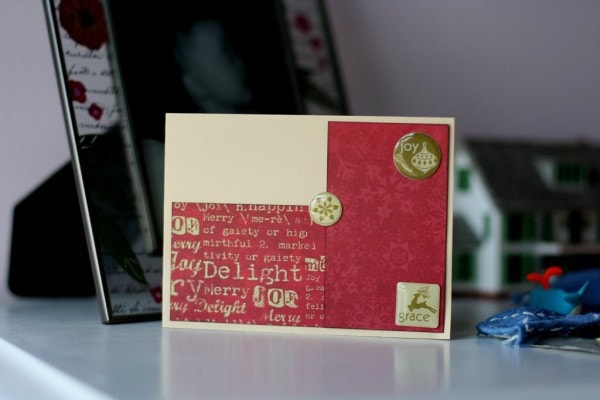 And he made me one with some lovely calligraphy (the whole note inside is calligraphy too!). 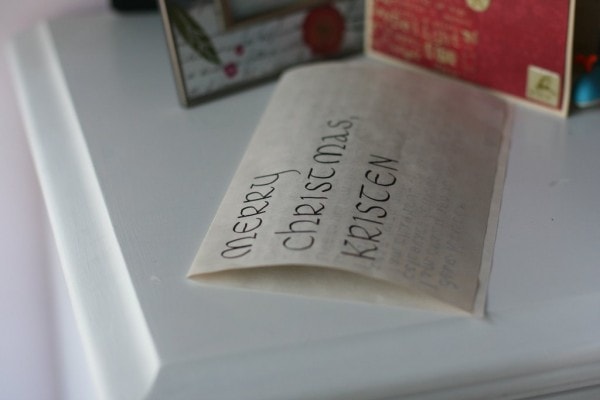 In addition to hand-made things, some of the gifts we gave were second-hand (which for us usually means “from Goodwill”).

Last year for Lisey’s birthday, I gave her a thrifted little white shelf for the wall by her bed, so that she could have a place for some of her small treasures.

I found a similar shelf at Goodwill this year and tucked it away for Sonia. Hers is generally covered in turtles or Japanese erasers. 😉 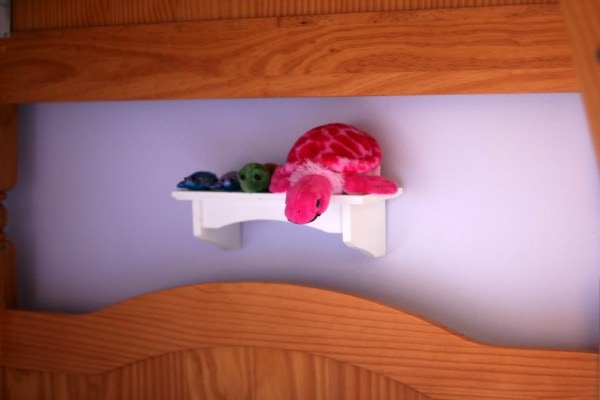 Of course, we found a large number of bath supplies at Goodwill for Sonia and Zoe (not included in the picture is a large container of cupcake-shaped bath fizzers). 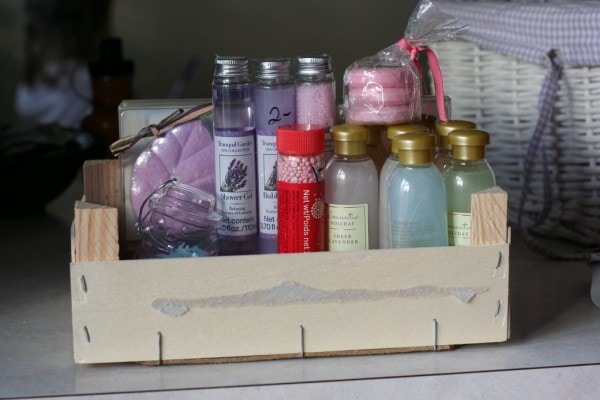 I am always surprised at the number of new-in-the-package bath beads and fizzers that we find at Goodwill…when I first started shopping there, that type of thing is not at all what I expected to see!

I found a Peep coloring book at Goodwill for Lisey, which was most excellent. Because regular stores do not have Peep books in December! 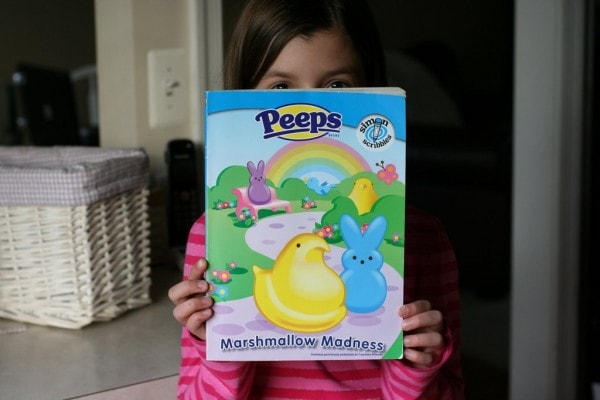 I also got a package of sidewalk chalk for Zoe, but I didn’t manage to take a picture of that because she was outside using it. 😉

In addition to homemade and thrifted gifts, we also gave our children some new things (for instance, we gave Joshua some new t-shirts (one with a gecko on it and one with Mario characters on it), Sonia and Zoe got new rollerblades from Aldi, and we gave Lisey a pile of embroidery/sewing supplies).

This is because I’m not a die-hard “used goods only” kind of gift giver. If I can find something second-hand or make something myself, I do, but if I want to give something that’s not available at Goodwill or that I can’t make, I look for a good deal, buy the item, and I don’t feel guilty.

I’d miss thrifting and making gifts if I only ever bought brand new presents, but feeling like I had to make or thrift all my gifts would make me crabby and stressed, I think. So for me, this is a happy middle-ground.

(and those of you that were confused about Sonia’s Christmas turtles should visit my 365 blog tomorrow to have that all cleared up!)

your post is both endearing and inspiring. I hope you all had a merry christmas and a lovely new year! Your babies' handmade presents to eachother will be a tradition i hope to keep if i someday have children. Thanks for reminding me how lucky we all are!

This year, for all my classmate-friends, I bought cute tins from Goodwill & the Salvation Army, washed them *thoroughly*, and filled them with Scotcharoos & Peppermint Bark. I was even able to find a huge spool of cute cottage-plaid ribbon at Goodwill, so instead of using wrapping paper I tied a big pretty bow around each tin :). They were SO well-received, and I was excited that each person could tell that I had picked a tin that specifically "went" with them. My mild fears were that at least one person would think the secondhand-ness was "gross", and boy was I wrong! It was one of my favorite gifts I've ever put together! Plus I was able to give gifts to almost 10 of my friends, without spending much more than it cost to make the treats inside. Each tin was probably about 50 cents.

If you're even the least bit concerned about putting food in reused tins, you could put them in plastic bags inside the tins. Or wrap them in plastic wrap or aluminum foil.

The whale pillow and blanket is impossibly adorable!!!

Cute gifts Kristen. I like the bags that Joshua & Lisey made. I love having the handmade in there, but definitely couldn't do all handmade.

Thanks for the tip! I get so frustrated with the Goodwill permanent marker in the most obvious places (like the front of a mirror or glass dish!). Sometimes I imagine the employees are deviously writing it in the worst possible spot just to annoy me.