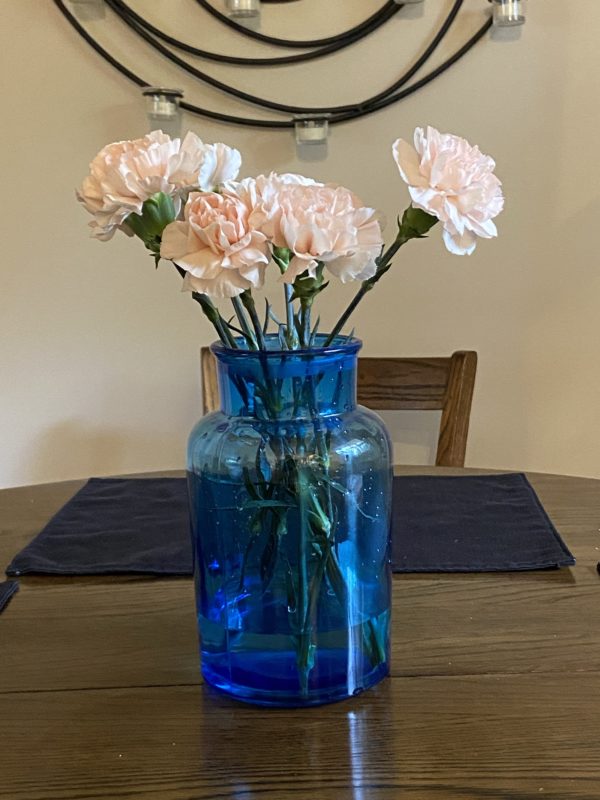 This jar is a Treasure House rescue item…if you follow me on Instagram you probably recognize it.

1. I painted a chair 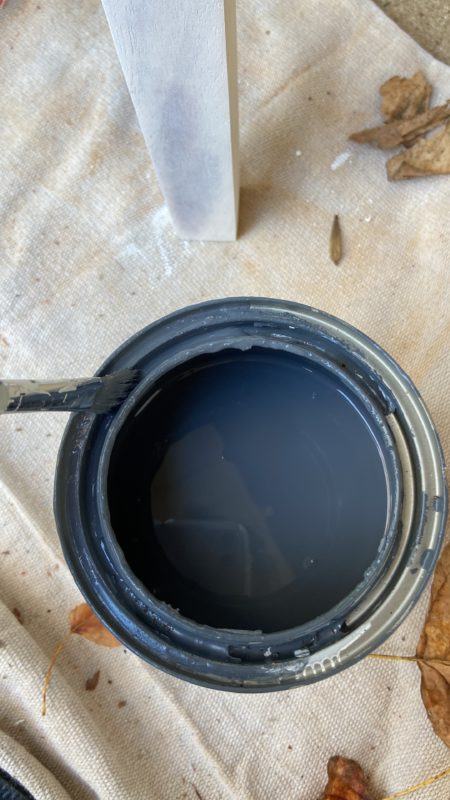 I’ll show you guys the finished product in another post, but for now…I’d gotten two free chairs from my Buy Nothing group and I painted one back in August. 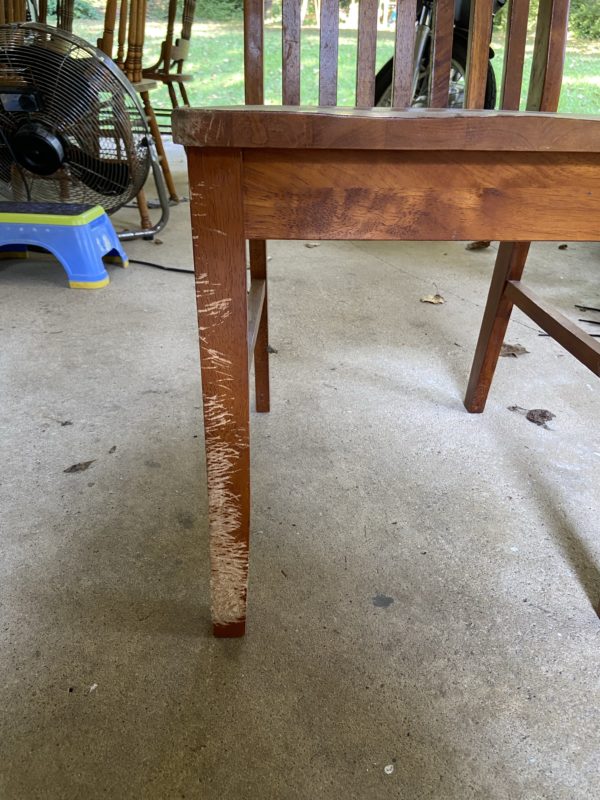 Now that school has started, though, I have had no time to work on stuff like this. Homework and studying are taking up all my free time!

However, I am currently in the midst of a brief lull between exams, so on Saturday, I sanded, primed, and painted the other chair while I listened to microbiology lectures. 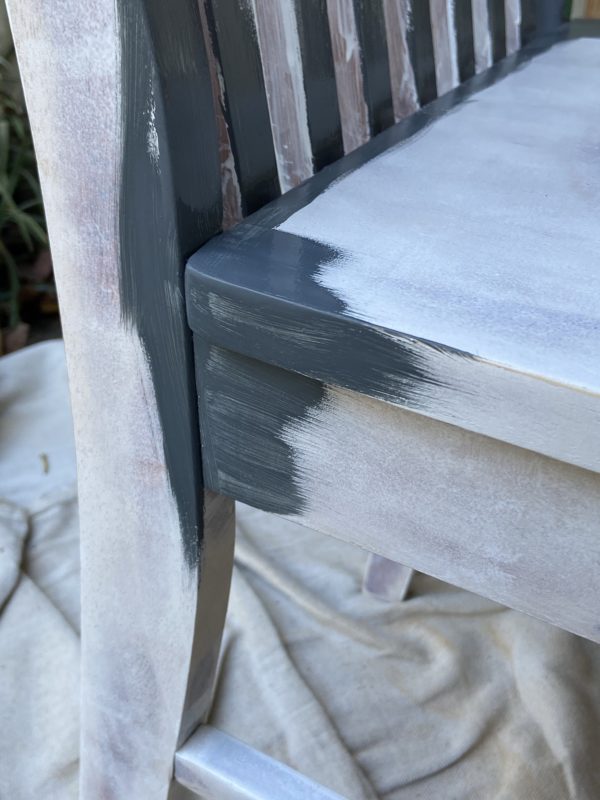 So, now we have two chairs that match the table I re-did from the treasure house. 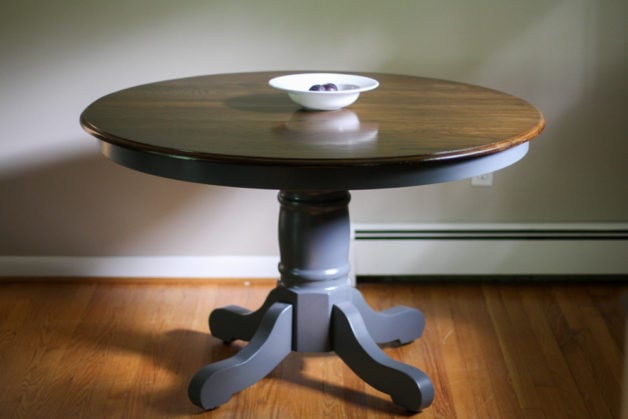 And probably when the semester ends, I will get around to two more chairs. 😉

Again with the lull between exams…on Saturday I made a gallon of yogurt. Yay me! 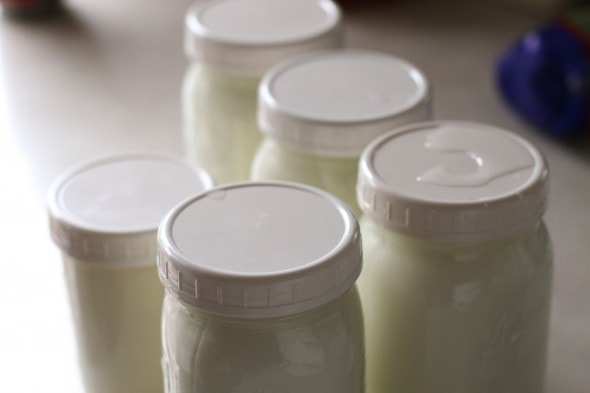 Here’s how I make yogurt (no yogurt-maker required).

3. I used some wonky carrots in my soup

I needed a few carrots for a soup I was making, so I grabbed the ones from the bottom of the veggie drawer. They were a rather random assortment, and some of them were pretty hairy*, but I peeled and sliced them and they worked fine in the soup. 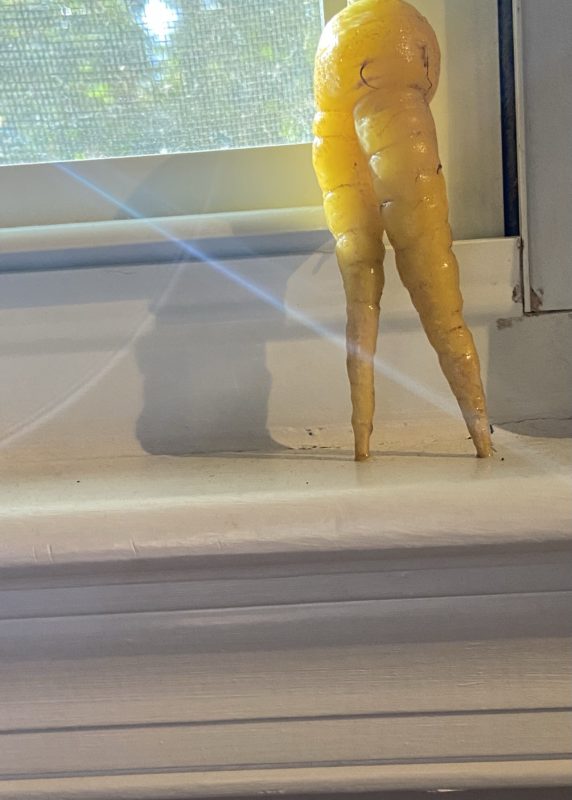 It was a PROCESS to get ahold of a company…all the ones I called had such long hold times. It seems obvious in retrospect, but of course October is not a good time to order heating oil. Whoops.

After spending multiple hours on hold (in total), I did finally get a delivery scheduled with a company that gives a $0.75/gallon discount for new customers. That brought the price down to the best I could find anywhere.

It’s still going to be something like an $800 bill, but that’s better than what it would have been otherwise!

And I am thankful I do not have to keep calling oil companies now. Whew.

I am late to the game this week, but... 1. I made all of our meals at home, even though I didn't want to. 2. I am in the midst of making a scarf using leftover yarn. 3. I had to buy my youngest a new costume because there was no way that he was going to squeeze into the one I bought him about a month ago. However, I was able to find one at the secondhand store. It was the same character so he's happy. I also bought him a fall jacket at the same time, because he has almost outgrown his old one. 4. I will baking a birthday cake at home today. 5. I *finally* got the loan forgiveness form filled out and mailed off. (Public service... I don't want any political comments on it.) 6. We borrowed a walker to take some Halloween pictures. I know that's kinda weird, but we have a family costume. While no one will use the walker for actual trick-or-treating, we wanted some posed pictures. 7. I fixed the vacuum myself.

Please, what color paint did you paint your chair? Is it chalk or regular paint? Lovely color.

It's Benjamin Moore Advance paint, in Westcott Navy. It's a latex paint that behaves a little like an oil-based paint, and I just love it for furniture. It's so easy to work with.

The painting of the furniture is very nice and the wonky carrots made me laugh..Just add some heels to that carrot!

My Frugal Five: 1) I harvested some very tiny potatoes and tomatoes from the yard. The potatoes were tiny but I have more growing and will see how they look in the springtime. They seem to take more than a few months to grow...... I've posted a request to my neighbors asking for a bit of sawdust or straw (to cover the plants) and hope someone answers.

2) DS2 was at school and there was a fundraiser...Students were selling used cassette tapes! My car still uses those cassettes and well, he got me some. I love the 80's music....And he supported a good cause.

3) DS1 wants to take a trip for the holidays but doesn't want to spend much money. It's a long car ride in bad weather and hubby offered to use his airline miles for a nearly free trip by plane...Hopefully, DS1 will like the idea and fly.

5) DH needs tires on his car, but only 2. The back tires are fairly new.

Ok, that's hilarious that they were selling cassette tapes!

1. Mended a pair of thrifted jeans that had a tiny area coming unstitched at the side. I’m glad I saw it when it was small and easy to mend!

2. Received a Covid booster shot, covered by insurance. I have an infant and work in healthcare so hopefully this also helps protect others.

3. Haven’t cut my curly hair since January. The place I like just increased their prices by $90(!) so I found another place that will charge a more reasonable rate. I find it’s worth paying for someone who specializes in curly hair as it makes a huge difference in how my hair looks, and I only cut it every 6 months or so.

4. While staying in an AirBNB traveling, my DH went out for a walk in the morning and came home with about 5 canned goods and some dried beans from a free pile he passed. We are also enjoying a free bottle of “two-buck Chuck” organic wine (I’m sure it’s more than $2 these days!) from our AirBNB hosts, which is extra special because we only drink wine on the rare occasions when we are given some.

5. I used part of the $25 Sbux GC I mentioned last week to buy two breakfast sandwiches for DH and I before a super early-morning flight. I was glad to avoid paying airport prices for food.

6. I earned 500 Delta miles and 150 Starbucks stars for linking my accounts (an ongoing promotion). The miles never expire, and the stars will turn into either another free breakfast sandwich or three chocolate croissants.

My biggest frugal win is patience. We have a number of projects on our home we’re getting quotes for and some of them we’ve decided to do ourselves (drywall repairs, fencing, electrical, these will take longer than hiring out) and some (ADA accessibility projects) we are seeing if insurance or community programs will help with. Some projects we have an idea of what we want but we are waiting until we have a full picture so we can do it correctly the first time. I’ve never lived in a house that has needed so much updating but it’s been so fun to learn new skills and look at spaces and say, “I did that.”

Other Frugal things: eating at home, not buying much gas (perks of living so close to everything!), finding clearance items for things we need for the house, making Halloween costumes at home, using local library.