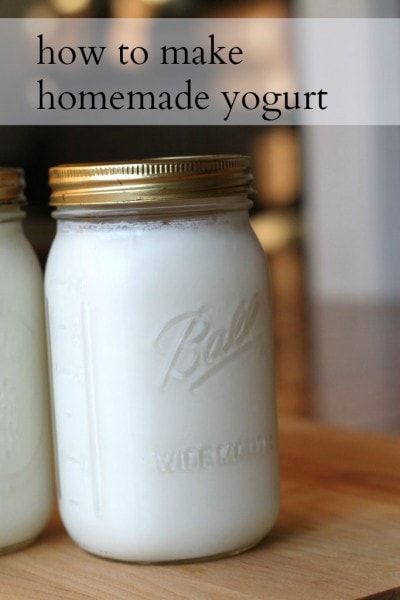 Why should you bother making yogurt at home? 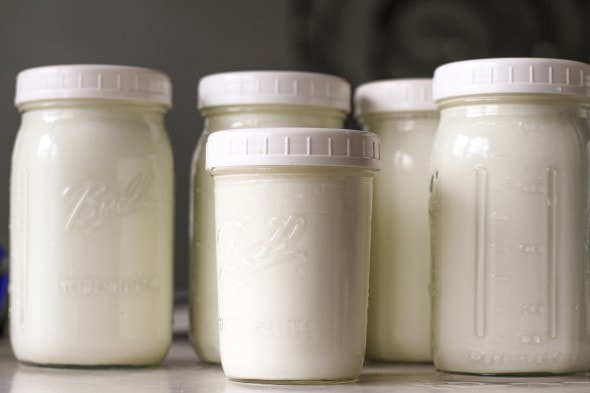 The first time I made yogurt, I thought it was a total pain-in-the-rear and I was SO never doing it again.

But, after I did it a few times, I realized that it didn’t really take that much hands-on time, and that I could get some kitchen tasks done easily while I waited for the jars to boil and for the milk to heat up.

And of course during the three hours that the yogurt sits in the cooler, I’m free to do whatever I want to do as the yogurt requires no supervision.

If you still need convincing, you can read about why I bother with this process each week. 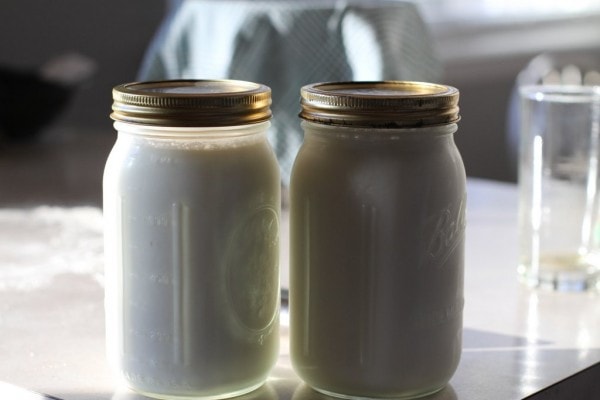 When I can get local milk, that’s what I make my yogurt with, but when that’s not available, I use commercial whole milk.

Unless you’ve got a specific reason for avoiding milkfat, I would caution against using lower fat milk products to make yogurt. Whole milk will make your yogurt much thicker and creamier than low-fat or fat-free milk will.

You can feel free to make a smaller quantity of yogurt if you worry you won’t be able to use 4 quarts. Just use a half gallon of milk and two quart jars.  The yogurt keeps for a month, though, so if you can use a quart a week, just make the whole gallon and you’re set for a month!

The recipe requires no special machines…you probably have most, if not all of these items in your kitchen already.

Here’s the equipment that I use (plus a un-pictured cooler). 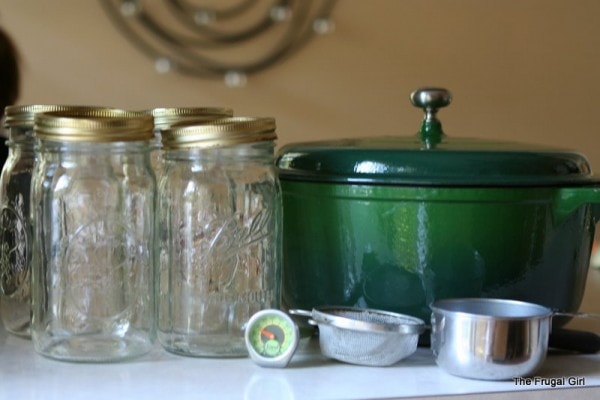 The recipe I have suggests sterilizing the jars. I’ll include the directions for that, but I have to tell you that I’ve tried the recipe with and without sterilizing, and I haven’t noticed a difference.

To sterilize the jars, you just boil them in about an inch of water, along with the bands and lids for 10 minutes. 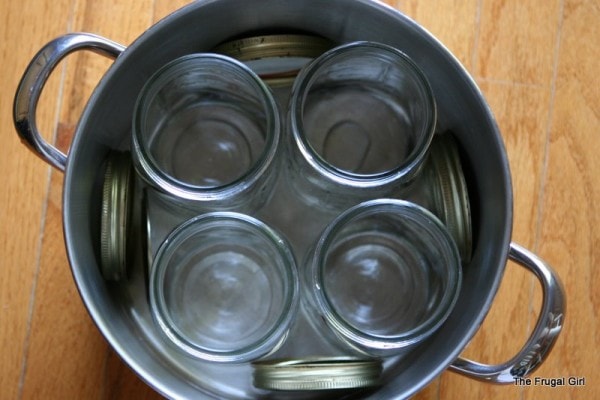 Next, you need to heat the milk to 185-195 ° F.  A heavy bottomed pot works best for this because your milk will be less prone to burning and sticking to the pot bottom while heating.

and it is the BOMB for heating milk. For some reason, I have zero trouble with milk sticking to the bottom of the pot. Highly, highly recommended!

If you own two stockpots, you can just leave the jars and lids in the first pot and use a second pot to heat the milk. 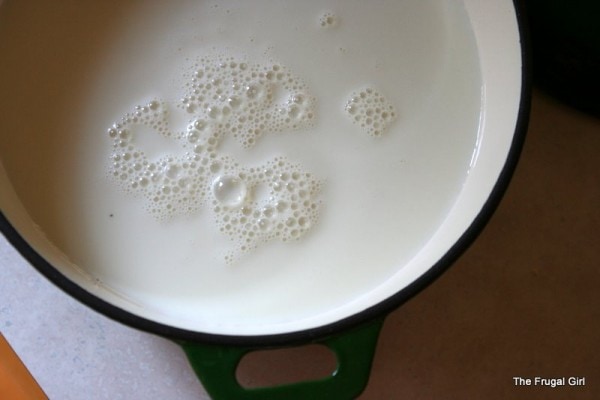 Once the milk reaches 185-195 degrees, take it off the heat and place it in a sink filled with cool water until the temperature drops to 120 degrees.

A hot cast-iron stockpot can break if you put it into a sink full of cold water, so at this point I pour the milk into the pot I used to sterilize the jars. 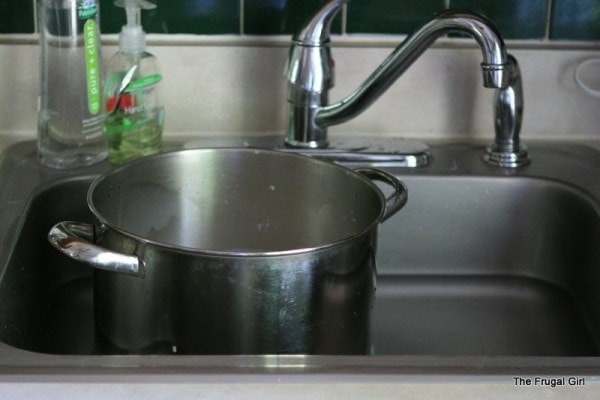 The starter is just previously cultured yogurt, which will spread the yogurt cultures all through your gallon of milk, turning it into yogurt.

If this is your first time making yogurt, you’ll want to use 6-8 ounces of plain (or vanilla) yogurt.

If you’ve already got jars of homemade yogurt in the fridge, though, you can use a cup of that as your starter. 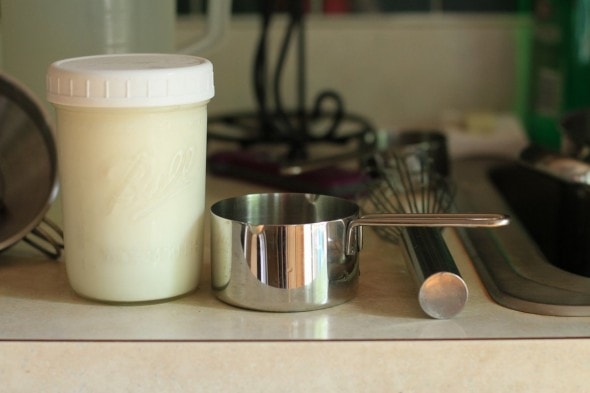 For a purchased starter, I can heartily recommend Yoplait, Dannon, or Stonyfield Farm. Other brands or store-brands might be iffy, though.

I used an off-brand cup as a starter once and my yogurt didn’t turn out at all.

(NOTE: A number of readers have reported failed batches using Greek yogurt.  Also, a Greek yogurt starter will not give you Greek yogurt, since Greek yogurt is made by draining whey from regular yogurt.)

Once your yogurt turns out nicely, you should hardly ever have to buy a starter again. 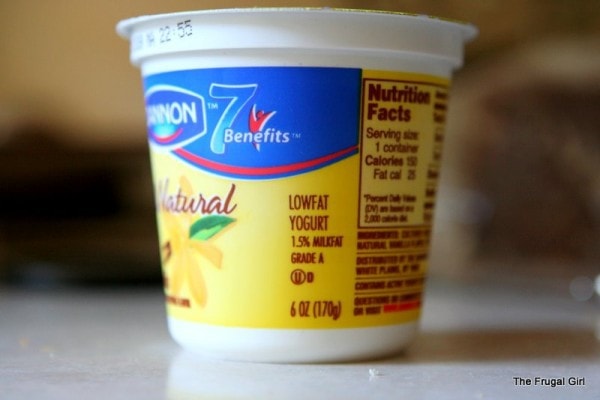 The original recipe I have specifies that you should not open your starter until you’re ready to use it. I don’t know how necessary this precaution is, but I haven’t been brave enough to try using an opened quart of yogurt as my starter. I’ll let you know if I try, though!

At any rate, you’ll need to whisk the cup of starter into the 120 degree milk. Make sure it’s entirely mixed up so that the yogurt culture is spread throughout the whole gallon. 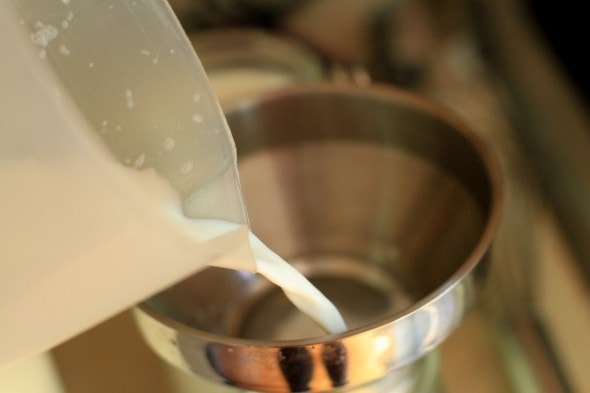 I own this fabulous Kuchenprofi stainless steel funnel

. The removable strainer is great because it can catch any bits of milk that formed a skin during the heating process, but if you don’t own a funnel like this, you can put a small strainer over top of your funnel. 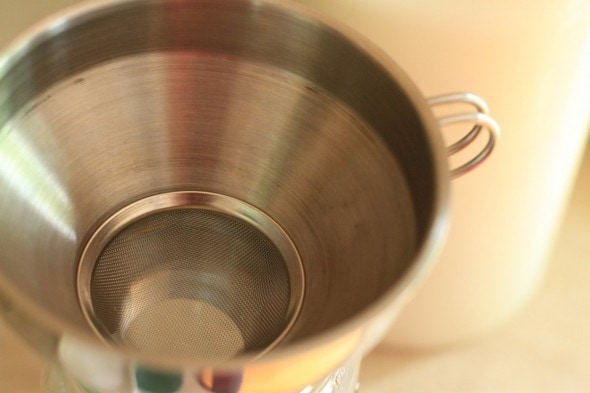 The milk will probably have some bubbles on top, which you can leave if you like. 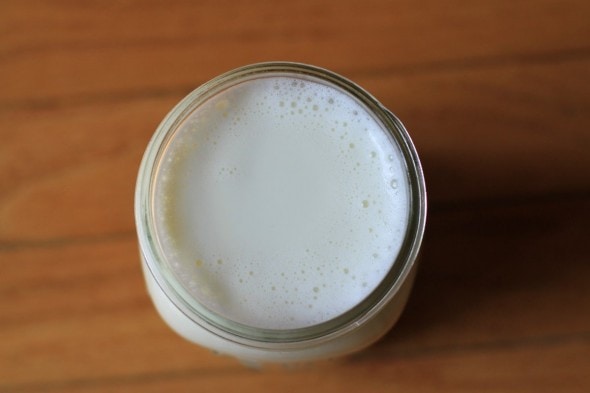 They won’t affect your yogurt one way or the other, but if you prefer a neater surface, you can skim them off.

Top each jar with a lid.

You can either use lids and a band, or for $5, you can get a set of Ball Wide-Mouth Plastic Storage Caps

, which I just love. They are so very convenient.

For regular-mouth jars, you can use the lids from grated Parmesan containers (you can see one in the background of this photo.) 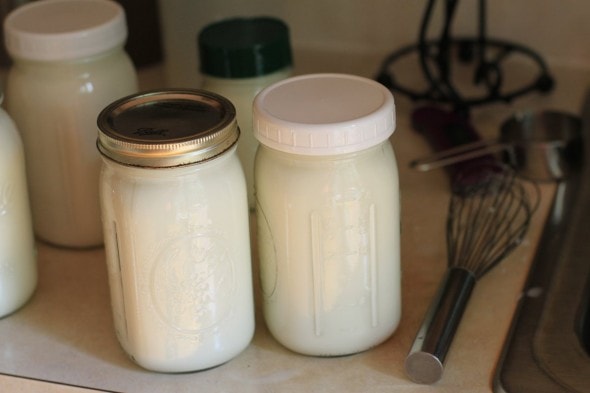 Place the jars into a cooler, and fill with a gallon of 120 ° water. You want the water to come at least 3/4 of the way up the jars, or the yogurt will not stay warm enough to incubate.

So, if you’ve got a really large cooler, you may need more than a gallon of hot water. 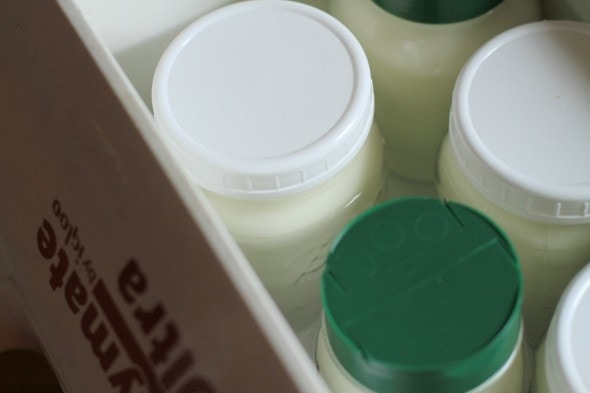 Shut the cooler lid and leave it in a draft-free place (not outside, for example, and not right by your front door in the wintertime) for three hours.

After three hours, remove the jars to the fridge. The yogurt should be fairly firm at this point. It will firm up more in the fridge, though, so don’t panic if it’s still a little sloshy.

Once it’s been refrigerated, your yogurt should be about this thick. 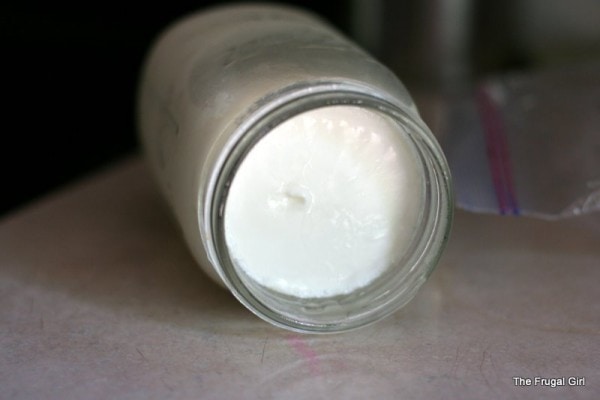 And when spooned into a bowl, it’ll look like this, as long as you’ve made it with whole milk. Yogurt made with lower fat milk will not be as firm. 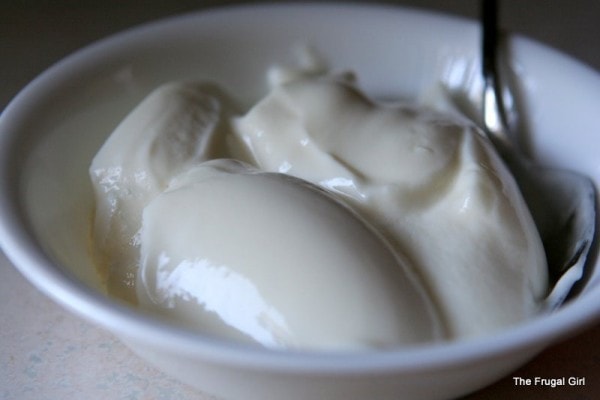 (makes 4 quarts, which will keep for at least a month in the fridge)

For vanilla yogurt directions, see the bottom of the recipe.

1 gallon of milk
1 cup yogurt starter(you can use a small cup of plain Dannon or Yoplait yogurt, or you can use a cup from your previous batch.)

1. Place four quart glass canning jars, four lids, and four screw-tops in a large pot. Fill with an inch of water; cover with lid and heat to boiling. Boil for ten minutes. Leave the lid on the pot and move it off the heat until you are ready to use the jars.

2. Pour one gallon of milk into a large, heavy bottomed stockpot or Dutch oven. Heat the milk to 185-190 degrees Farenheit(90-90 Celcius).

3. Place the pot in a sink filled with cold water and let the milk cool to 120 degrees fahrenheit(50-55 degrees celsius)

4. Stir one cup of yogurt starter into the cooled milk, using a whisk. Stir well to ensure that the starter is thoroughly incorporated into the milk.

5. Pour the milk into jars, and put the lids and bands on. Place them into a cooler.

7. Shut cooler lid and leave in a warm place for three hours. When the three hours are up, place the yogurt in the refrigerator.

To make a delicious vanilla version of this yogurt, add 1/2 to 1 cup of sugar to the four quarts of milk when it’s cooling in the sink. Then stir in 1-2 tablespoons of vanilla, depending on your preference, and proceed as usual with the recipe.

Here are more of my yogurt-related posts:

Did you have a yogurt failure? Here’s a whole list of things that could have gone wrong and what you can do to fix them.

Thanks so much for the clear and easy to follow instructions. My yogurt turned out great!!

I'm so glad to hear that. Yay!

I make yogurt myself several times a week. https://miteigenenhaenden.wordpress.com/2018/10/18/joghurt-selbst-gemacht/ It's really not an art. I never boil out the glasses. No need. When I use raw milk, i.e. milk that comes directly from the farmer and has not been treated, I heat the milk to a little over 70 ° C (~ 167 ° F), then I let it cool down to around 30 ° C (86 ° F). Then I add the yogurt mixture. When I use commercial milk, I don't heat the milk. Then I stir the yogurt mixture directly into the milk at room temperature.

It is not right for whole milk to become harder. Milk with 1.5% fat is just as firm if you use the appropriate yogurt mixture.

It's possible that you killed the starter organisms with the too-hot temperature. I'd probably just use the failed yogurt in smoothies or for baking, and then try again with another batch of milk.

I have tried remaking failed yogurt and my word, it was a disaster! I wouldn't recommend it. Mine turned all sorts of weird and curdled when I tried remaking it.

I followed instructions but it did not thicken much at all. Can I use this milk and start over?

I tried that once with a failed batch and ended up with a curds and whey situation that was entirely inedible!

I would probably just use your semi-failed batch for baking and smoothies and try again with a fresh gallon of milk.

I just wanted to say, Kristen, that thanks to your amazing how-to, I have for real learned to make yogurt over this crazy pandemic year. My crowning achievement was making it from my OWN starter from my last batch last month. I did notice that that batch was a little thicker than all the others, and I think it was because I used 1 1/4 cups starter (I had an extra 1/4 cup left and threw it in). So I think that’s the only change I’d make in future. But seriously, thank you! I can get the whole process done and in the cooler in an hour, also while I’m puttering around the kitchen on Saturday morning.

Yay! I'm so happy to hear this!