Happy Tuesday! I usually publish FFT on Wednesdays, but I’m moving things around a little this week.

1. I helped Zoe fix holes in her wall. 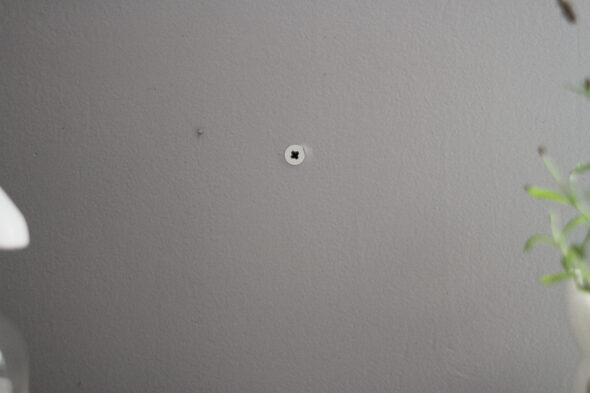 She had some anchors from when her dresser was on that wall, so we:

And her wall is looking fresh again. 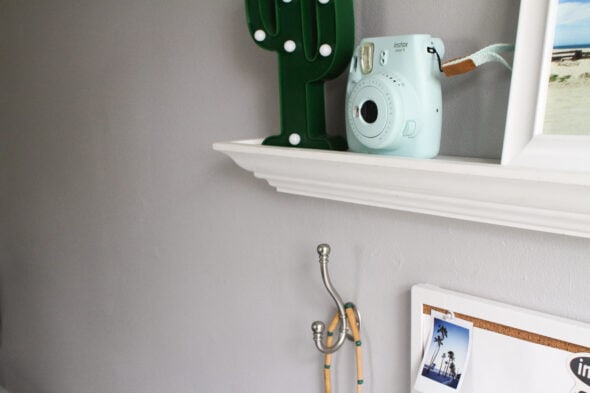 Plus, Zoe learned some new skills, which will probably be useful to her in the future.

I’d stored Zoe’s leftover wall paint in a glass jar, so it was super easy to get out for this job. 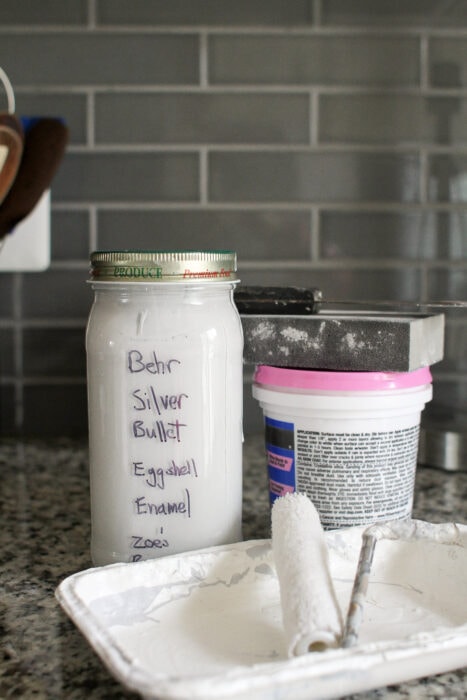 2. I ordered a replacement clipper blade.

Zoe’s undercut needed some freshening up, so I gave her a buzz.

And I noticed that our clipper blade had two broken prongs.

So, I hopped on eBay and ordered a replacement set for $20 (it includes both blades).

Considering that clippers are very hard to find right now, and that every trim I do at home saves at least $20, I figured the money was very worth it.

ALSO: I took the screws out, removed the blades, and found a lot of hair lodged back there. After removing the hair, the clippers are running much more quietly.

3. I helped Sonia tailor a shirt she made. 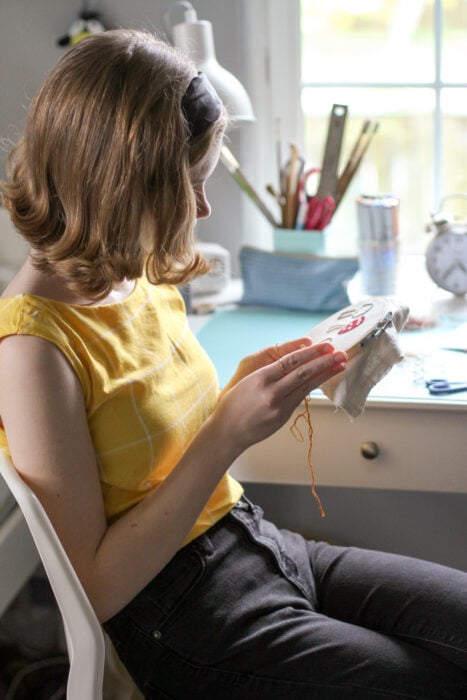 She used a vintage pattern for this one, and the shirt came out way too big.

(So frustrating to buy the materials, cut them out, and assemble them only to find the garment doesn’t fit.) 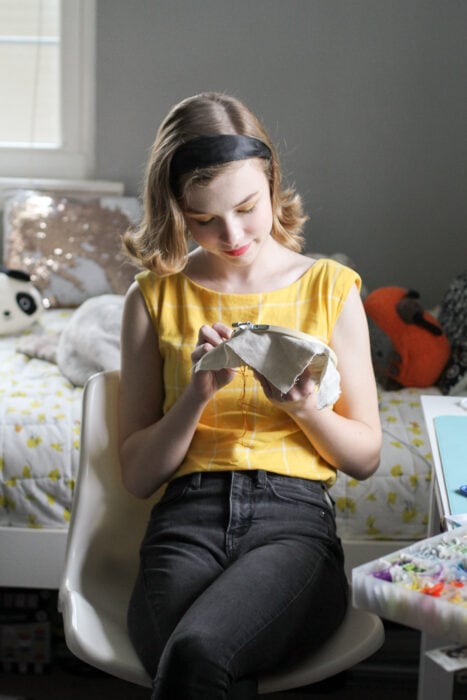 We were not about to let all that go to waste, so I had her put the shirt on inside out, and I pinned the sides to make it more fitted.

She basted it, we took notes about where it didn’t fit, marked some new lines, and she basted again.

Once we had it right, she sewed the seams for real, and we trimmed the excess material away.

Here’s what Sonia is embroidering, in case you were wondering. 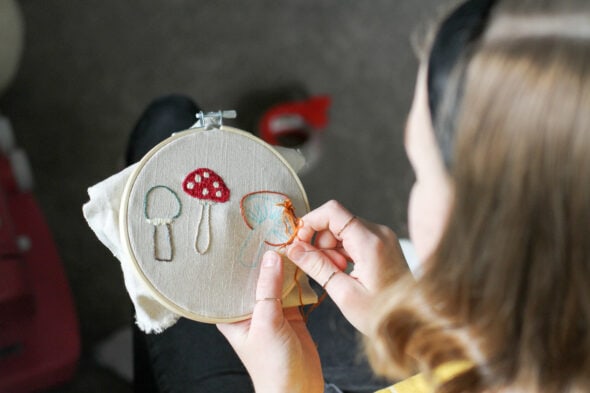 4. I used an old frame for Sonia’s embroidery.

Once she finished the above embroidery, she wanted to frame it.

Obviously, right now is not a good time to go frame shopping (!), so I dug through my pile of old frames and we found a frame and mat that would work.

We cleaned the frame and glass, then sprayed the embroidery with starch, ironed it, and placed it in the frame. 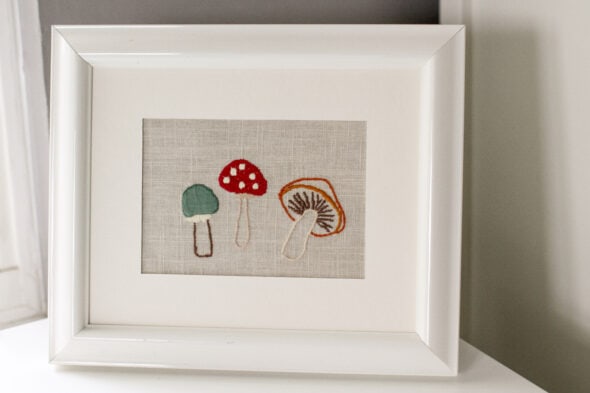 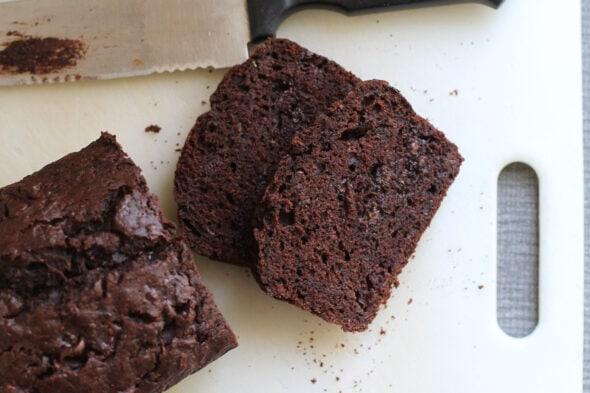 *the semi-soft mozzarella I buy for pizza molds pretty fast once opened. So, I shred it all on a pizza night, use what I need, and then freeze the extra in a ziploc bag.

Your turn! What frugal things have you been up to lately?

P.S. A lot of you have said that you’ve been glad to see more frequent posts from me of late, just because they feel like a slice of normal life.

If you want even more words from me (!), I just wanted to remind you that I have a little second blog, Kristen Prompted, where I write short essays based on prompts, usually Monday-Friday.

You can subscribe to that one, and there’s also a link to it up in my header here (easier to see on desktop vs. mobile).

1) purchased wine at Walmart for $2.50 typically I spend between $2.99 and $3.99 a bottle. 2) my husband and I have been craving mac and cheese and bought at Costco on sale and saved $3.00. 3) reviewed weekly flyers for Fred Meyer and Safeway to find out which store offered the best sales price for meat. Safeway was the winner and bought ground beef and petite sirloin from them. 4) bought shrimp on sale. 5) bought baking supplies at Walmart since it was cheaper than Fred Meyer.

1. Walked outside to see the view the Blue Angels/ Thunderbirds fly over yesterday. Had a great viewing spot, total social distancing and it was free. 2. Steeping two cups of tea from one tea bag in a Pyrex measuring cup, using less honey for both myself and DD. We are happy with it. 3. Saw the cluttered kitchen view behind me on a telecom. Redecorated by removing things and finding a new home for them and throwing some trash such as expired coupons away. Total cost free. 4. Got some liquid hand soap with my kohls cash earned from birthday gifts that were mailed directly from Kohls. No shipping costs. Given all the hand washing we need the hand soap. No trip to the post office and possible covid exposure. Supporting a store I like. 5. Car insurance is giving a 15% refund as we have been in a stay at home situation for over 6 weeks. I filled up gas before stay at home and have not needed additional gasoline.

1. Deviated from my new norm of going to the stores every 2 weeks to stop in to our meat store that was having a good sale on chicken and pork. When I got home I immediately separated it all into portions and put them in the freezer. 2. Last year we had a groundhog that helped itself to our garden. We caught one Monday! We borrowed a trap from my dad and used leftover broccoli stems to lure it in. We saw one more, so we'll have to do it again, but hopefully it'll help our garden this year! 3. Lots of leftovers for lunches. 4. I got 4 gallons of milk to last us these 2 weeks but 3 of the 4 had expiration dates a week into the 2 weeks, so I took what was at the end of its life and portioned it out into amounts that I use in baking and put the bags of milk in the freezer. 5. I'm pacing myself with the library books I checked out for myself. It will probably be at least 2.5 more weeks until our library staff is allowed back in the library. I am tempted to buy books and magazines when I'm in stores, so hopefully this will help me fight that temptation another week.

Ruth T, re: your #2: If you're interested, my mom's 1943 Joy of Cooking has a recipe for groundhog. (Just in case times get harder for all of us, I may be cranking this one up myself.)

We have cooked so much this month. And I'm proud to say we haven't wasted much like we used to. I'm definitely being alert to what is about to go bad in our food and make sure they get eaten first.

1) Put one of our cars in "storage" via insurance, as our shelter in place was just extended through June 2) Received a credit for the cancelled soccer season for the kids 3) Juiced lemons & oranges gifted to us from neighbors. Made orange muffins as a thank you gift for the orange tree neighbor 4) Shared potato salad that I'd made with our other neighbor, who gave me a quiche as a thank you. (We've also been walking her dog every day.) 5) Menu planning, avoiding waste, eating all meals at home. That type of fun. I baked oatmeal yesterday, so I'm good to go for breakfasts for a few days