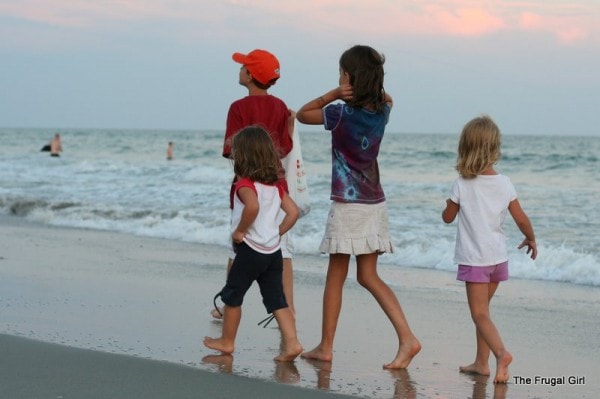 Today’s post is quite off-topic, and I hope you’ll forgive me for that. This post came about because when I read a guest post on My Zero Waste* the other day, I was inspired to respond to an assumption made at the outset of the article.

*(Mrs. Green of My Zero Waste would like for you to know that she did not pen this intro herself…it was written by the guest poster, who is the mom of four kids)

The introduction says, in part,

“Becky is a freelance writer and Mum of four children aged from fourteen to four. With the huge burden she has added to the planet she is hoping to offset this as much as possible and strive to learn more and live as “˜greenly’ as she can.

While I do indeed think that we need to tread lightly on the planet, I am not at all certain that four children are “a huge burden to the planet” and I’m going to share a few reasons today.

(I should note at the outset that in order to stay on topic, I’m only addressing the green/un-green aspect of having 4 kids. I have ideological and theological thoughts on the topic of family size as well, but they’re somewhat unrelated to the particular question at hand.)

A TV consumes the same amount of electricity if 6 people watch it as it does if 1 person watches it. A grill full of chicken uses just as much propane as a grill with two pieces on it. A pot of soup for 6 simmers for the same amount of time as a pot for 3. It costs as much to heat a home with 1 person in it as it does to heat a home with 6 people in it (our house is the same size as our neighbors’ homes, which have 1-3 people living in them). A bathtub of hot water costs the same if 1 kid bathes in it as it does if 3 bathe in it.

There are many more instances like these I could offer, but I’m sure you get the idea.

Think about it. A family with 1 child will probably buy the same baby/child related items that a family with 4 children will buy. The difference is that those items will get used 4 times.

Despite the fact that I have four kids, I’ve owned exactly one crib, one swing (secondhand), one bouncy seat (secondhand), and one high chair (ours actually just sat on top of a regular chair).

And though I have 4 kids, I have not had to purchase 4 wardrobes of clothes. My son is dressed primarily in hand-me-downs, which get handed down to my nephews. My girls wear mostly hand-me-downs as well, and their hand-me-downs get used three times before we hand them on to someone else.

Even if I did buy new items for my children, I still wouldn’t be buying more than a family with one child would be buying…I would just be using the items 4 times before they were passed on.

Though this is not true across the board, it is often the case that large families have less disposable income. This means that we have to be more careful with our money, and that often means that we live in an environmentally friendly way. We buy food in bulk instead of in individual packages, we stay sort of close to home when we vacation instead of flying around the world, we cook at home, we don’t buy the latest and greatest of everything, we don’t buy enormous wardrobes for our kids, we can’t buy every new toy that comes out, and so on.

And on a personal note (I don’t know how true this is for other families), having four kids makes me drive less. My kids are well-behaved, but it is still kind of a production to get us all out of the house. I only leave when it’s necessary to do so and as a result, my van sits in my driveway most of the time.

If people who want to be good stewards of the earth stop having children, or only have a few children, the odds of the next generation caring about the earth aren’t all that great. Of course, some people raised in un-green homes will decide to live in an earth-friendly way, but a more sure-fire way of producing a generation of responsible people is to grow them at home. My four children are immersed in our lifestyle, and they all know the benefits of buying secondhand, composting, recycling, freecycling, and reducing our consumption (ok, maybe Zoe is a little lost on the last one. But she is only 3.).

So, does family size matter?

It is entirely possible for a large family to produce mountains of trash and consume inordinate amounts of resources. What I’d like to point out, though, is that it is also entirely possible for a small family to produce more trash and consume more resources than a large family…I’ve seen many families smaller than ours who buy, consume, and throw away far more stuff and resources than we do.

What do you think? I’d love to hear your perspective on this topic. Please remember to be polite to others as you discuss a topic that has the potential to make tempers flare. And I’d especially encourage my fellow Christians to be kind and thoughtful…it’s easy to be defensive about this, but instead, let’s be like Jesus. 🙂

Oh my goodness. Please think again about your arguments.

1-3. The fact that there are economies of scale in larger households--that per-capita consumption rates are lower--is irrelevant to the fact that total consumption (carbon production) rates are higher in larger families. Dramatically higher. This is what has the impact, not the per capita rate... unless you're proposing to have other people's kids for them, which you're not.

4. The fact that you will teach your children to care about the earth while you yourself have a disproportionately high impact is a strange form of procrastination and hypocrisy, especially if they grow up to tell themselves the same thing. It's a little like those, "But my kid could grow up and cure AIDS!" arguments. If the average person cured AIDS (or did the carbon equivalent), we wouldn't have an overpopulation problem.

I realize this post is years old, but I badly hope you and other commenters have thought harder about this topic. The lack of critical thinking here makes me worry about the future of our planet.

That movement is just giving those of us who don't want kids permission to go ahead and not have them.

I just came across this post while browsing your archives, but what strikes me funny is that people consider 4 children a large family. That perception is primarily cultural. In the middle east a family of six is quite small and "modern." In many societies eight or more is the average. I wouldn't start worrying about the "greenness" of it when you "only" have four! I do agree with your points, larger families do not necessarily necessitate more waste. It's all about how you choose to live your life. Great article.

no matter how you look at it, having more children is going to add up to a greater impact than having one or two. population doesn't grow in a straight line. If your four children each have four(if earth conscious parents raise earth conscious kids, if you follow that logic, then probably parents who believe in big families will raise kids who do), and those 16 kids each have four kids, and those 64 kids each have four kids, you have your original family expanding to 256 (plus 84 kids who begot kids) additional people over 4 generations. If two children do the same it results in 32(plus 14 kids who begot kids). 340 v. 46. that is a big difference. And, even with the best intentions, as families grow that large, it would be a stretch to assume that you would be able to impart your values on that many people. I know people who have five, six even 12 kids, but even with all the talk about going green, no one wants to look at the fact that population alone is a huge impact. A human drinks water, eats food, makes waste, creates garbage, drives cars that, at least at this point, still pollute, consumes/burns energy or fuel to heat their home. I could go on. My opinion? You simply cannot think green without considering the size of your family.

I'm new to your blog, so I just read this post for the first time.

I'd like to say that your reasoning is clear, detailed, and compelling. Most people who are interested in a green lifestyle seem to subscribe to the belief that having more than one child is bad for the earth (see Bill McKibben's book Maybe One, among others). I was thrilled to read your fantastic answer to that argument -- you brought up excellent points that I haven't read anywhere else.

My children are nearly grown. They were homeschooled K-12 and are both 4.0 students in college (one is in graduate school). It's great to see a new generation of parents on the homeschooling path. God bless you and your family!