Since it’s a new month, I thought I’d give a little update on how things are going with my goals for the new year. 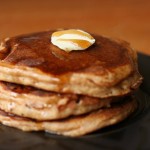 This is going really well so far. The kids and I have been eating toast, yogurt, oatmeal, Cream of Wheat, bagels, muffins, and pancakes for breakfast. Even Joshua, who is a big cereal fan, is pretty happy about the non-cereal options available. And I’m pretty happy that I don’t have to work as hard at finding deals on cereal.

So, all’s well in the breakfast department here, at least for now.

2) Start saving for a replacement van.

Happily, we did get started on that this month…we have a new ING account set up specifically for this purpose, and we’ve started contributing to it. We were able to put $200 into it this month, and hopefully we can continue to do that each month. I’d really prefer to put $300 in each month, but $200 is better than nothing.

3) Keep Quicken updated once a week.

I’ve been trying to do this every Saturday, and though I missed this past Saturday, I am way more caught up than I usually am! So, I didn’t completely fail at this in January, but I hope to do better this next month.

4) Spend $80 a week on groceries whenever possible.

This, I failed at! I only had a few pennies left in my grocery envelope at the end of January. I’ll give it another try in February, though.

5) Save enough for a replacement camera body by September.

I didn’t exactly make any progress on this goal in January (actually, I went backwards), because of the Haiti fundraising we did here! But that’s ok…helping people in Haiti is much more important than getting me a new camera body. And I do still have a number of months left before September anyways.

I never did tell you the end result of that fundraising post, did I?? I pledged $1 for every comment and link, and there were 300 total by January 21st. So, I sent $300 off to Living Water at the end of January. That wouldn’t be so amazing on its own, but all of you that commented and linked were also busy giving to Haiti, so I imagine that the cumulative effect of all of our giving was nothing to sneeze at. Thank you all for giving!

I missed out on your Haiti fundraiser---we moved in the beginning of January and I got way behind on reading my blogs. How wonderful you were able to make such a big donation!! My son and I had discussed it (it was hard to keep the disturbing images in the paper away from him, but I wanted to him to know that people needed our help) and we donated to Unicef.

Emily on the Southern Prairie

I have also been de-cereal-ing my life! My current favorite not-cereal is -- and I know this sounds weird but work with me here -- is whole wheat couscous. I cook a few cups and then eat it with berries and vanilla soy milk all week for breakfast. Filling, healthy, cheap, no weird additives!

Eating non cereal breakfasts is great. I don't think people realise how expensive cereal is per gram or they wouldn't buy it.

ING is awesome!! :) We have several little savings accounts with them too!

I love putting my oatmeal in the crockpot the night before with apple pieces or applesauce and a little cinnamon and brown sugar. Of course, it does make it harder to get back to sleep if I wake up in the middle of the night............

can you tell me about your oatmeal process? I'd love to wake up to breakfast. How many ppl are you feeding with it? I'm the only one here who will eat it... I wonder if it's worth it. Maybe I should get a smaller crock (2nd hand of course).