On Tuesdays and Thursdays, I post a picture and just a few words. 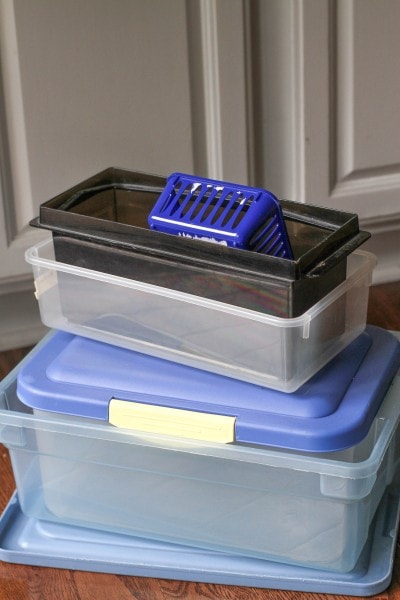 I know I’ve managed to declutter, not just organize, when I have empty storage containers at the end.

Decluttering = looks good right now, plus I have a prayer of it staying that way.

P.P.S. Joshua took some bird pictures at the beach last week.   This was, um, before he dropped his camera into the water.   It appears to be dead.   Small bright side: after a siesta in a rice bowl, the memory card lived on! So at least his pictures weren’t lost.

I have unexpectedly had some time in the house, after my job, the last few days and have tackled some piles of junk and toys that have been moved and shuffled for forever. Rather than organizing, I culled pretty ruthlessly... a whole trunkful of "extra" stuffed animals and decorative pillows, bags of toys my kids outgrew, office supplies, etc. went to Goodwill. Some items worth selling I listed and have largely sold on a Facebook site. Others have been donated to a local "little library" down the street. There's a point where no matter how much your organize, or what systems you employ, you're still trying to stuff 10 pounds of flour into a five-pound bag.

Amen. I am so much happier when I get rid of stuff rather than shuffling it.

Ah, yes! I have 6 empty Rubbermaid containers outside right now. I can't quite part with them, which is an odd phenomenon. ;-) I think I'll post them on my neighborhood website to see if there are any takers.

I've been doing summer decluttering before the school year starts too Kristen. I've taken a cue from the KonMari book and now use recycled cardboard boxes. The ones from Amazon, ePantry and Honest Co (the 3 places that I get packages from each month) are perfect. And free!

One problem I have with decluttering is when the items are organized and I have space for them. It's hard to motivate myself to get rid of these things because, well, why bother - I have the space. My roommate is even worse than I about this. Along the lines of Battra92's comment - we have a lot of boxes/packaging.

Hmm, this is not a problem I have, maybe because we have six people living in a not-super-large house? Heh. I always feel like I need to get rid of more things to make space.

I'm doing a lot of downsizing myself and the fact that I have three large Rubbermaid style totes in my garage makes me strangely happy. Once I start decluttering and downsizing on video games is when the struggle will really begin.