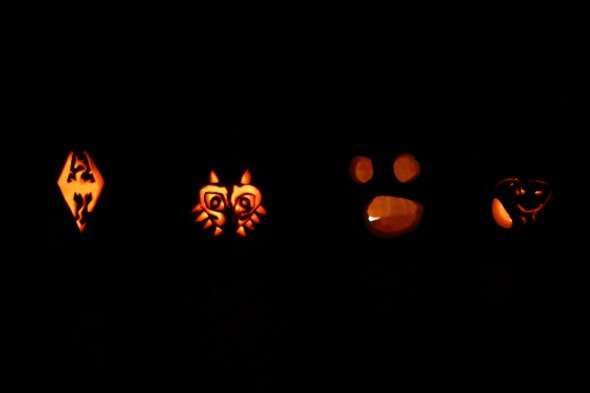 From left to right, Joshua’s is the Skyrim logo, Sonia’s is Majora’s mask from Zelda, Lisey’s is going to be a puking pumpkin, and Zoe’s is Snoopy. 😉 Lisey normally picks something super hard to carve and so she’s always the last one finishing.   So this year, she decided to go super easy, although I think she may decide to do something a bit harder next year, because finishing before everyone else isn’t ideal either. 😉

Sonia was the last one standing this year. 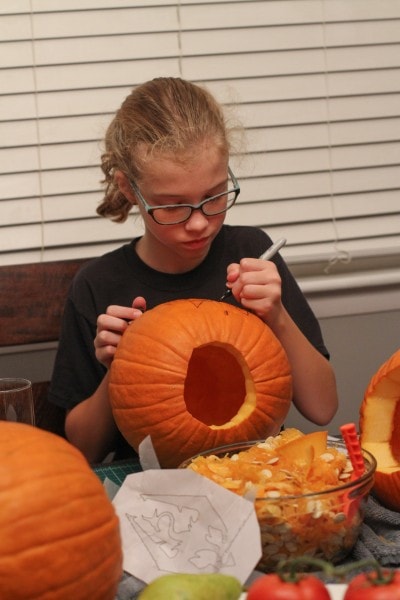 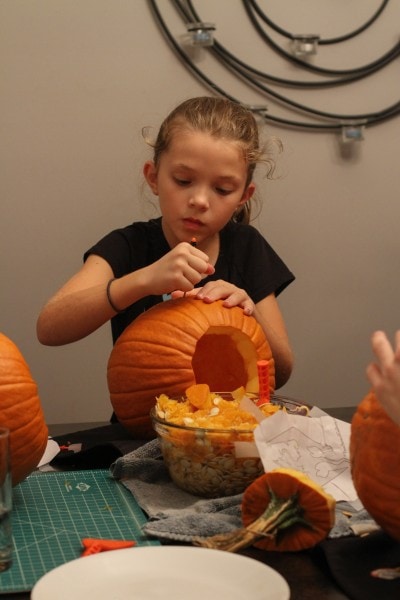 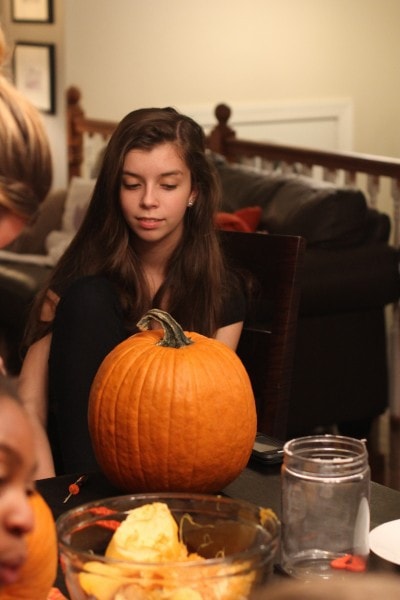 Mr. FG was gone for work until late last night, so we had some friends over to carve with us. 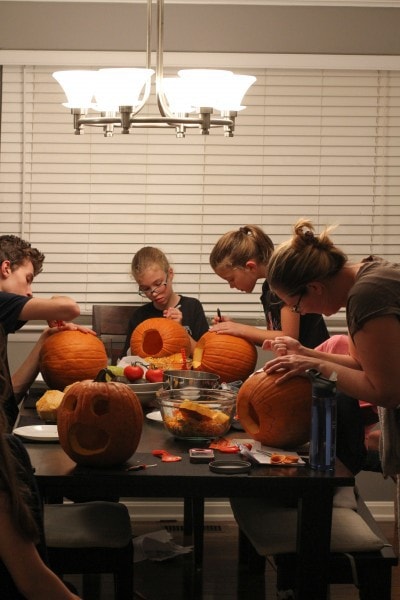 And we introduced them to the magic of pumpkin carving kits. Those flimsy-looking little knives are the bomb, and if you haven’t tried them yet, you totally should!

SO much better than paring knives.

The kit is $5 on Amazon, but you can probably find one for a lot less at post-Halloween sales in the next few days. 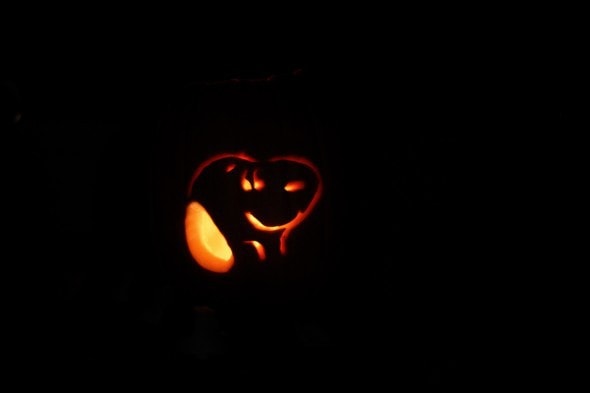 The kits usually come with some patterns, but my kids usually like to do some googling to find exactly what they want. 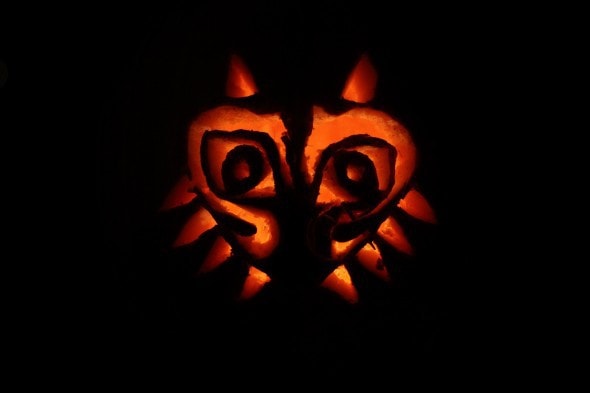 And here’s a roundup of our last 5 years of pumpkin carving. 😉

So Joshua carved the same pumpkin 2 years in a row? Did he realize?

Oh yes, he realized! :) He just wanted to give it another go and see if he could do it better.

The carving kits are great! We have had ours for several years. This year we did four rounds of pumpkin carving with different sets of friends. Now we have a family of jack o lanterns on our porch. We compost them when the season is over. Ephemeral art at its best!!!

We bought the kits when our kids were little and are still using many of the pieces. Sometimes they break, but since we've used them year after year I'm happy to replace them. We get so many compliments on our pumpkins.

But I has having shoulder problems and decided to "retire" from the pumpkin carving business. I found a hollowed, carvable foam pumpkin and used the kit on that (made out of foam similar to florist's foam). I've re-used my foam pumpkin year after year (with a battery operated "candle in it). That's been very frugal!

Yep, we break the knives every now and again too. So I keep an eye out for replacement kits after Halloween.

Hello Kristen, what do you do with the pumpkins after you're done displaying them? Do you eat them or do they end up in the garbage? Do your kids ever ask why you're carving a fruit and not eat it?

Only in a first world country you would find people to let food go to waste like this. We could feed millions in third world country ( in some places in U.S as well) where they not only eat the pumpkins but also the leaves, the whole plant really.

It is scary how wasteful halloween can be!

We don't eat our pumpkins, but we do compost them after we've lit them multiple nights.

While I do definitely care about people who go hungry, whether or not we eat the pumpkin we buy isn't directly relevant. If I eat the pumpkin, it doesn't necessarily mean a hungry person will then have a meal, you know? (a somewhat relevant article here: http://www.huffingtonpost.ca/nick-saul/food-waste-poverty_b_10327320.html)

I AM concerned about the environmental impact of throwing away produce, so that's why we compost our pumpkins. And it's why we try to avoid wasting food that we buy for the purposes of eating.

If you'd like to carve a pumpkin but are worried about the waste, you can carve it, light it with a battery-powered candle, and then cook the pumpkin up the next day.

My kids like to enjoy their carvings for days on end, though, so we opt to light them until the pumpkins begin to rot, and then we compost them.

I agree that it can be wasted food but that doesn't mean it all has to go to waste. If people do not want to eat it, they can compost it and use it to grow more food. I give our pumpkin left overs to the goats and chickens, which I knew not everyone has. Perhaps people have friends with chickens or goats or need compost materials if they don't compost themselves.

Kiddos are never too old for pumpkin carving! I love it and I love that my 13 year old daughter loves it too!!!!! I think no matter how "cool" they choose to act, they are still our little ones at heart!

Oh yeah. Joshua's 17 and he still enjoys carving a pumpkin.