I have a general grocery question that has been giving me trouble for some time. I plan meals and try not to go grocery shopping more than once a week. (We started this practice when we realized that our “last minute” shopping trips on the weekends were costing almost as much as my carefully planned trip to buy food for M-F!)

My problem, however, always comes down to produce. I go shopping Monday morning, and many things just won’t last until Sunday. Do you plan specifically by what will last? Just use frozen vegetables at the end of the week? Any advice would be appreciated!

Oooh, that’s so true about the last-minute trips. It’s way too easy to plunk down $20-30 when you really just meant to pick up two things.

I do plan my produce shopping and eating around what will last the longest. Fruits and vegetables that are the most perishable (strawberries, grape tomatoes, spinach, cilantro, etc.) go on the menu shortly after shopping, and produce that lasts longer is scheduled for later in the week. When properly stored, lettuce, celery, cucumbers, citrus fruits, apples, pears, carrots, peppers, watermelon, green beans, and tomatoes all seem to last a week without a problem (some of those will make it even longer than a week, in fact).

Also, some of the produce that I buy isn’t ripe and ready to eat when I buy it (this is especially true of pears, avocados, mangoes, and pineapple), so this gives me a little more time to use those up.

Of course, a large part of preventing produce waste is keeping an eye on what needs to be eaten throughout the week. Although I make a plan for what I buy, it’s flexible and subject to change if something ripens faster than I think it will.

Though we don’t eat a lot of frozen vegetables (I just prefer the taste of fresh, and I prefer a lot of my vegetables raw), I do keep frozen fruit around to use in smoothies. Obviously that kind of fruit lasts just fine for a week or more.

Do you have juice at every meal? I spy 2 bottle of sparkling juice, a carton of oj and a couple cans of frozen juice. Can that be cut out to help with the budget?

Oh, goodness no! We’d need a LOT more juice than that if we drank it at every meal…six people could go through a frightening amount of juice in two weeks.

At breakfast, the kids and Mr. FG each have a small glass of OJ (I don’t really drink juice).

At lunch, we drink water or yogurt smoothies.

At dinner, we drink water except for when Mr. FG and I have our weekly date night (we drink a bottle of sparkling juice with our meal then).

Mr. FG and I could drink water with our takeout, but it’s kind of fun to have a special drink once a week, and sparkling juice is a lot cheaper than anything alcoholic. And Mr. FG and the kids could go without juice at breakfast (they do when we run out!) as it’s not particularly nutritious, but it’s not a hill I’m going to die on at this point. I’m just pretty pleased that we’re all drinking water 95% of the time, especially because that is not a habit Mr. FG brought with him when we got married.

Actually, Zoe had a two-piece fish swimming suit that she wore for a lot of years. It wasn’t a string bikini, but it was two pieces, and I thought it was super cute (also, I think it’s amazing that my mother-in-law bought it when Zoe was born, when of course we had nooo idea Zoe would be so into fish!). 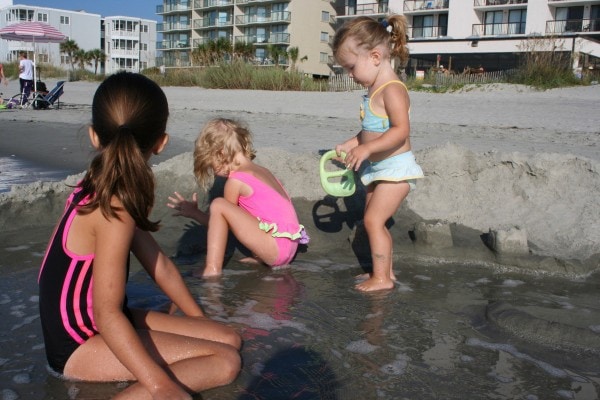 Sonia wore that suit some too…it worked when she had a diaper to help hold the bottom up! 😉 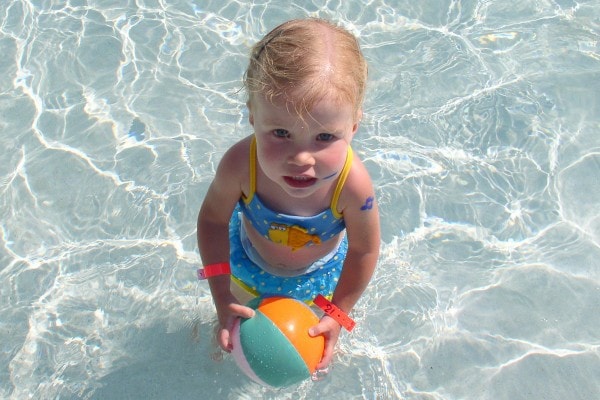 I really, really cannot get myself all lathered up about modesty for babies, toddlers, and little girls…I mean, I wouldn’t let them run around naked in the street, but a two-piece suit just doesn’t bother me. Mostly for little girls, I prefer to stay with suits that look like little girl suits, not mini versions of what you could buy at an adult bikini store (and the same goes for clothing).

I’m not opposed to two-piece swimming suits in the form of tankinis. In fact, that’s all I’ve worn for ages now, and they’re awfully handy when you need to visit the bathroom.

However, most of my girls are all so slender, a two-piece suit rarely will stay up, and so we’ve mostly opted for one-piece suits. Thus far, that’s what they’ve been happy with, as they’re not really fans of having their suits fall off!

As our girls get older, we’ll have a multitude of conversations with them about clothing choices, but hopefully, most of those conversations will involve talking about their heart attitudes and motivations, and helping them see what’s driving their clothing desires. Outward conformity isn’t what we’re after as much as a heart that wants to please God.

I'm a little late on this question (it's also waaay past my bedtime!) but I've been wondering and wanted to ask before I forgot! Anyway, I know you don't care about that. My question is how often do you bake bread and make yogurt and any other foods that you make on a regular basis?

I am puzzled as to why no one in Kristen's family seems to drink milk with their meals.

Mr. FG does occasionally have a glass with dinner, though.

The question for the Mom that drinks more juice than the blogger. Another way to look at Kristin's blog is more a guideline. Her budget is unrealistic for my family of 4. The first thing I noticed it is that her kids are young and don't eat as much as mine. I have a 13 1/2 year old and 10 year old. Both are extremely active with swim and water polo and probably work out 5 to 10 hours a week. So, if I fed them what Kristin does they would be very hungry. My kids wouldn't eat snacky stuff on Sunday (but I'd love it if they did as it would give me a day off from cooking). Our typical meals would Hamburgers with potato salad and Veggies with dip. Our Taco night would be tacos with rice and beans and cucumber avocado tomato avocado salad. I do find her advice helpful but adapt it to my family's lifestyle and budget. For example, I was buying my bread at the store at $4.50 a loaf and started making my own at home which now my family prefers We also tend to eat more "gourmet" food than her family so, our food budget is higher. Also, we eat more meat as well.

Exactly. Do what works for you!

I find that if I do a quick check of the condition of the fruit and veges each morning as I'm deciding tonight's dinner it really helps prevent wastage. If something looks a little sad it gets used that night or prepped & frozen. I meal plan fortnightly but don't specify a particular night for most of the meals. I do a fresh fruit, veges and milk top up in the second week to keep things as good condition as possible.

We do a second shopping trip on Fridays for fresh vegies, to replenish our milk supply (we go through 2 gallons a week, but prefer it as fresh as possible) and for special dinner items for Friday night dinner (i.e. fresh fish or a nice cut of meat) which is special in our house. BUT, we budget for this and stick to our list. My husband shops on the way home from work at a market that has mostly organic produce and foods, so he doesn't have the time or inclination to do any impulse buying.

I'm really excited because the Wednesday farmers' market on the campus where DH (and I, but I don't work during the summer so it's moot) work is opening again this week. We drive to a local fruit market on Saturdays, and then on Wednesdays when the farmers' market is running, DH stops by on his lunch break and gets stuff that we need. I find that a lot of the fruit we eat--apples, carrots, grapes--make it through the week, but other stuff--particularly berries, as mentioned, which are my kids' favorites--often doesn't last that long. This way we can replenish our fruit supply midweek, very easily. We usually just budget a certain amount for the midweek trip, around $15-20, and DH picks out stuff that looks yummy.