Scroll down for the fail. We’re starting with wins first! 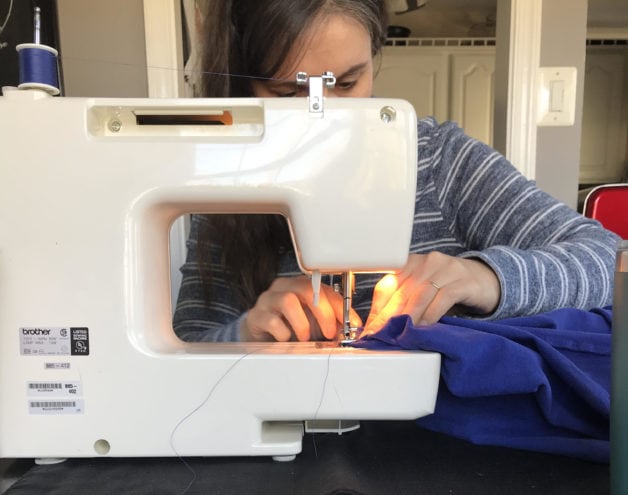 1. I mended an armpit hole

This is an American Giant item; it’s basically a hooded heavy-duty t-shirt and last time I took it off, I noticed it had sprung a hole in the underarm. 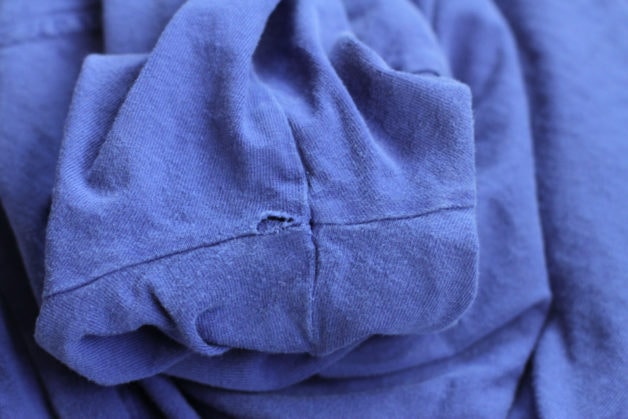 This happens to tshirts all the time, since the underarm is a stress point.

(I also wonder if it happens because sweat can be hard on fabric!) 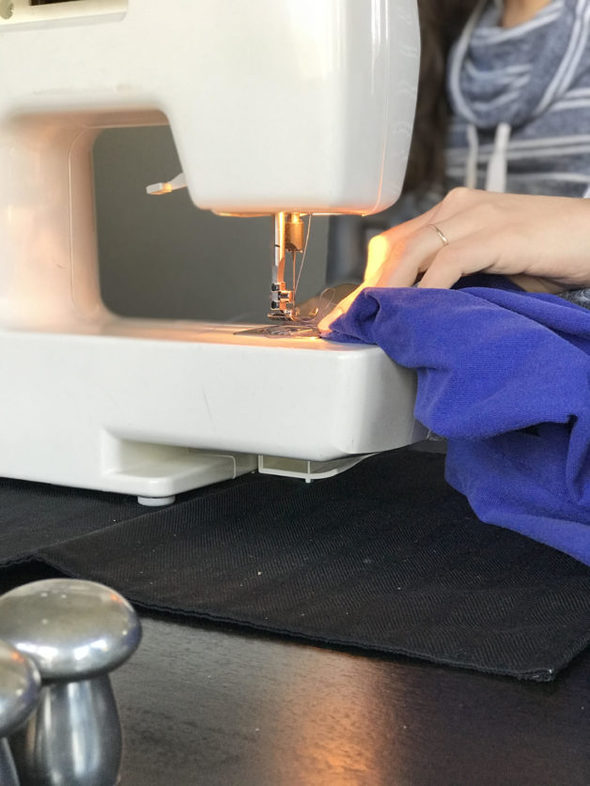 I did a quick zig-zag job on the inside, and we’re back in business. 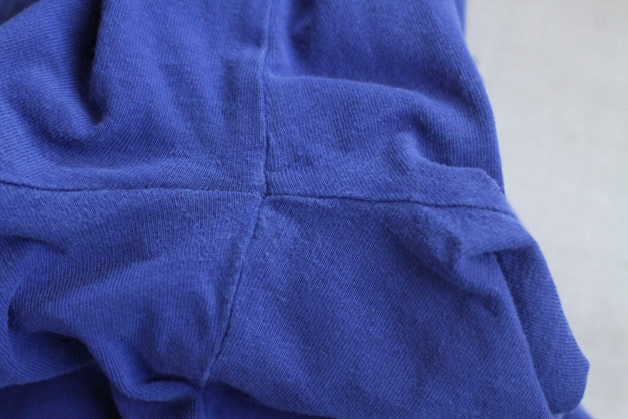 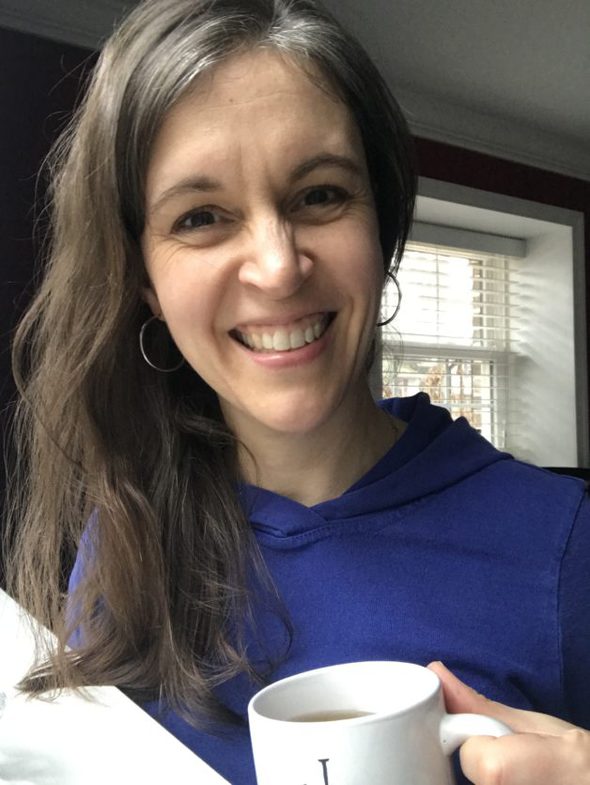 This pair of joggers is from American Giant as well, and I’ve had them for many years (they were a pretty early model, when American Giant first expanded into pant offerings.) 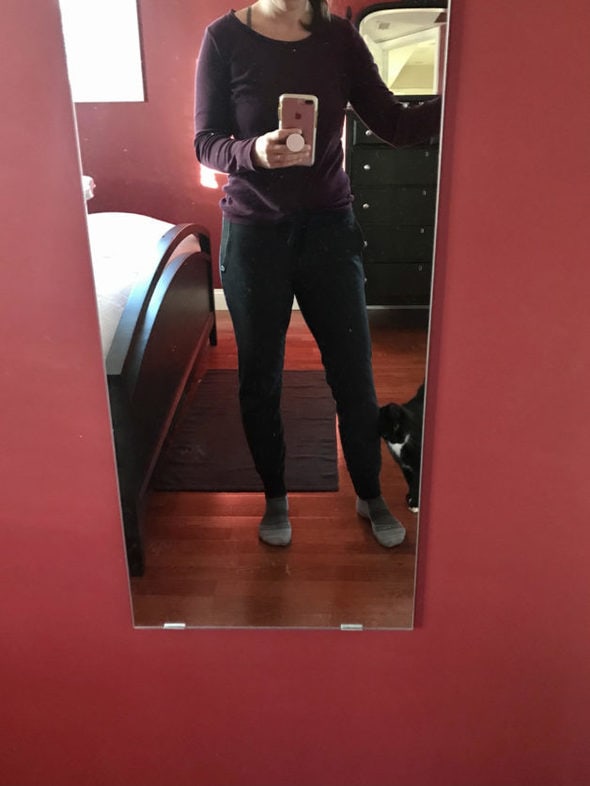 Look! There’s a guest by my leg.

I wear them pretty much every morning when Mr. FG and I go for a walk, and they are starting to sprout holes around the waist and pockets. 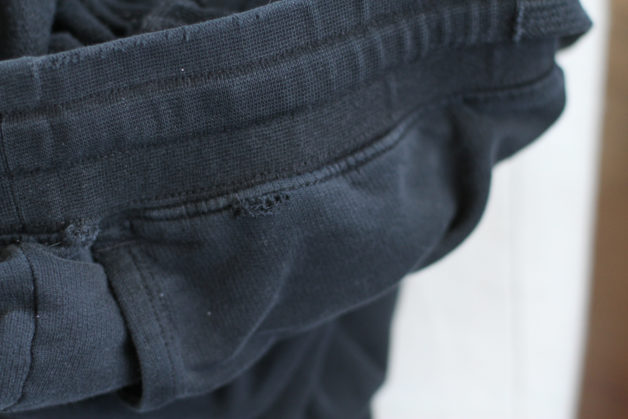 The rest of the pant fabric is fine, so I am not ready to trash them.

And since I only wear them for exercising, my mending does not have to be gorgeous!

I did my typical method:

Here’s the scrap fabric on the inside. 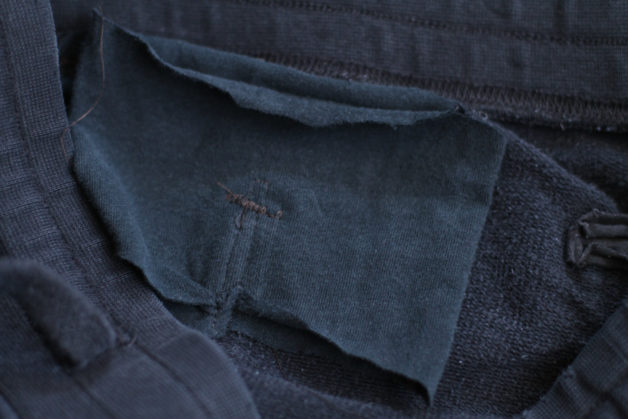 And here it is, trimmed.

And here’s what that fix looks like on the outside. Barely visible. 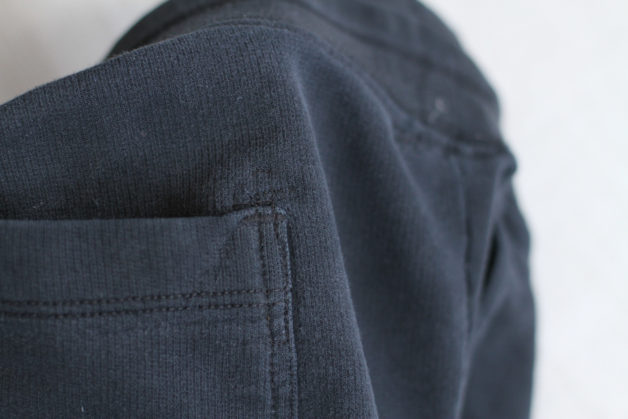 I did this in a couple of places on these pants, so they are all fixed up for now. 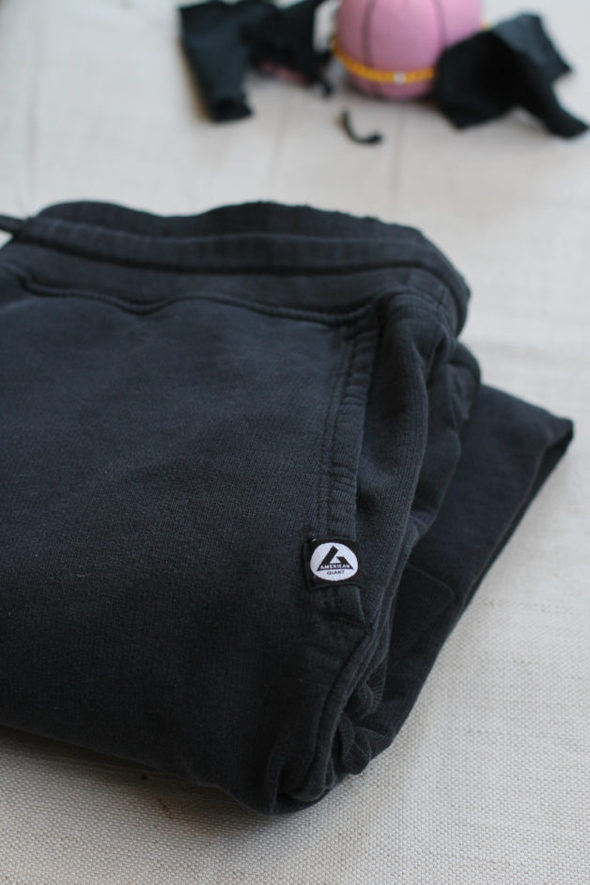 3. I made cupcakes to use up frosting

The nobility of this effort is vaguely questionable, just FYI.

Zoe recently had to make a cell model for her biology class, and she chose to make a cake. There was a fair amount of leftover frosting from this project, so I decided to make some cupcakes to use up the frosting. 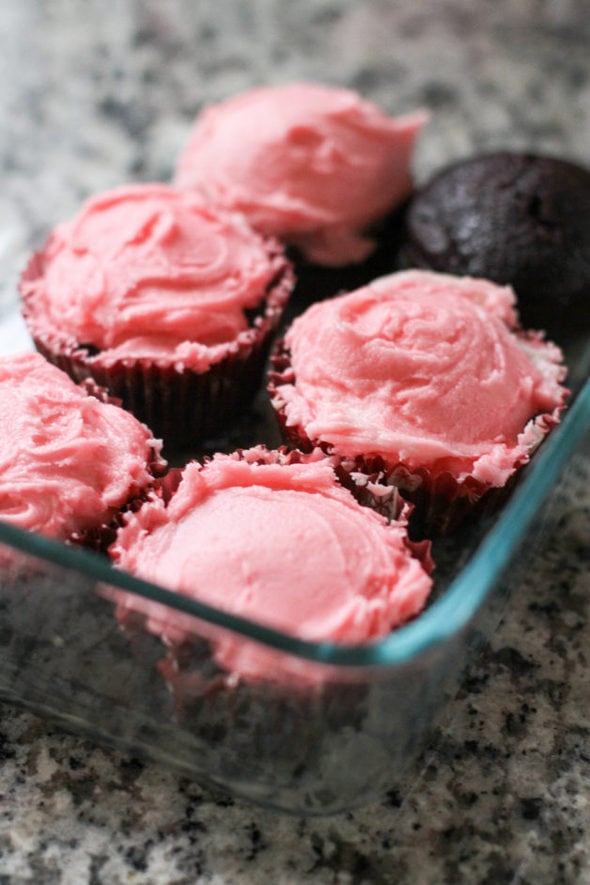 These had the added benefit of using up the very last of the coconut milk and also the random cupcake liners that had been languishing in my baking cabinet.

Plus the benefit of being, you know, cupcakes.

4. We really ate down the fridge

I know for some of you, this is still not an empty fridge. But for me, this is pretty darn empty! 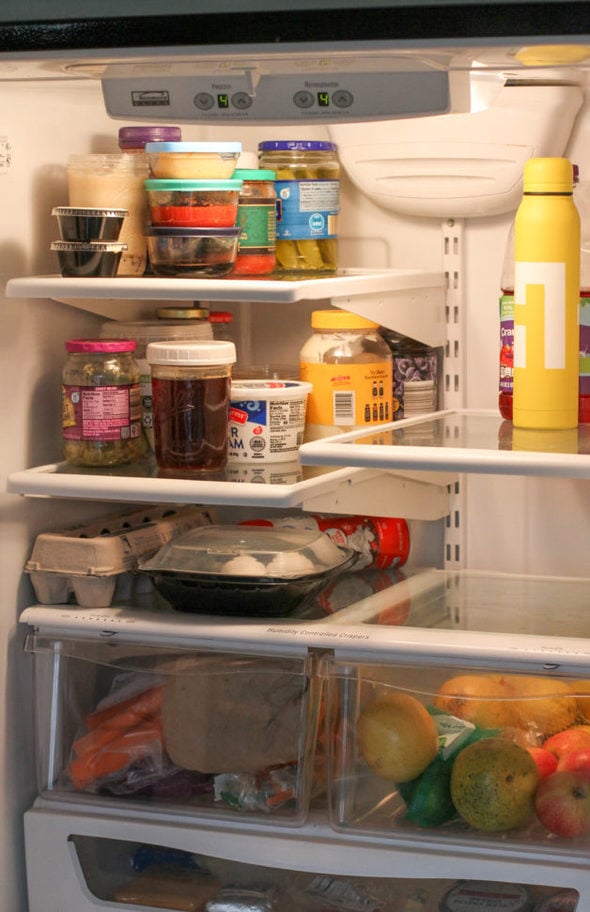 There’s still a fair amount of produce and cheese in there, but importantly, there are no leftovers.

I went grocery shopping yesterday, so my fridge doesn’t look like this right now. But I am pleased with how much we ate from the fridge before I broke down and went shopping.

Eating up what we have stretches the time between shopping trips and also keeps me from throwing food away. Definitely a frugal situation.

5. I organized my food cabinets (yay) and found some waste (fail)

Fridges and freezers are the places waste is most likely to happen. But on a sneakier, slower level, it can happen in a pantry too.

(I don’t have a pantry in my kitchen, but I do store food in a couple of cabinets.)

I found a few things in there that were expired/rancid (see below), but now I have a better idea of what’s in the cabinets and what needs to be used. 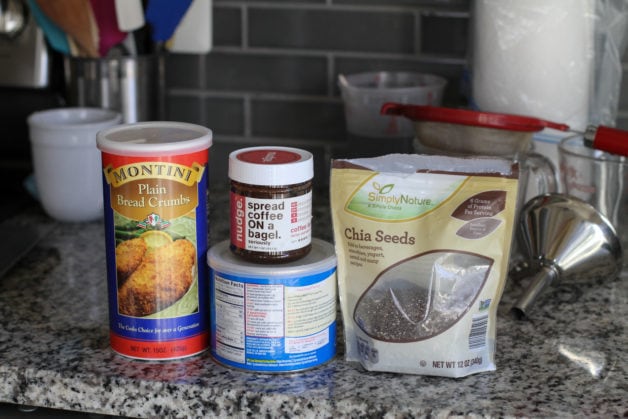 By the way, that coffee-on-a-bagel spread? I had hoped it might be sort of like coffee-flavored Nutella, but we thought it was terrible; so harsh-tasting.

I told Mr. FG it was like eating toast with spikes all over it. Which, ok, is a little dramatic on my part.

But it seriously made my toast inedible.

I'm a little new to sewing and this is probably a dumb question, but how did you mend the armpit hole? I see no stitching on the outside of the fixed piece. Did you just 'pull' the hole into the inside of the piece and then sew (thus making the shirt just a tiny bit smaller? Or was it like your joggers fix where you added more fabric inside from another source?

Do you ever repair holes in socks with your machine? My husband goes through so many socks!

Yep, your thought is correct. I used the existing inside seam as a guideline, and just pulled the fabric in a little tighter to catch it in the seam. So all the sewing happens on the inside.

I have never done sock repair before. Most of our socks are the thinner type that don't take to darning really well. But if you have heavier socks, it might be worth it.

I know Katy from The Nonconsumer Advocate does sock darning.

It took 50 minutes but I got through to my credit card to contest a $105 restaurant bill. Had the restaurant talked with me directly, they could have made it right or not had to refund the full amount. Since they didn't, this was my last option.

I am starting to deal with the attic storage, which means a lot of donations and maybe some sales.

Great job on the mending!

- We used up several things from the fridge this week so, no waste there! - I did a pick-up order from Sam's, which I figure is frugal since when I order online there's no impulse buying! - After skiing Monday (season pass which is usually the cheapest option if you go often) we had our own snacks and beer in the parking lot instead of buying anything from the resort. - Purchased our golf pass for the year which we KNOW is a huge money saver. As often as we play at this particular course our cost-per-round gets down to something like $5 each.

I'm sure there were other things...OH, have continued to follow up on a client check that still. has. not. arrived. Currently this isn't frugal, but following up on this is an important way to make sure I get paid.

The mending looks fantastic! I keep our clothing going longer that way too. Here's our five frugal things for the week:

1. My nursing student daughter is starting clinicals. She needed long sleeve white shirts for under her scrubs. I found three off brand thermals for a third of the price of Cuddle Duds. They are just as thick and warm.

2. I returned two skeins of unused yarn after overestimating the amount needed for a sweater I just completed.

3. My good friend is converting to Catholicism this spring and I wanted to get her a special gift. An after Christmas sale at a big box store allowed me to afford a beautiful white gold and diamond cross necklace at 75% discount.

4. My college student needed three books for her poverty in America class that we found via nook much cheaper than hardcopy and at the bookstore. A couple look so interesting that I will likely read them too.

5. We, too, have been fridge, freezer and pantry eating. We've got quite the pandemic stockpile that needs to be rotated to avoid spoilage.

1) Taking surveys has earned me $13—used it to help pay for baby shower gifts.

2) Bought 4 books for eBay resell at a thrift store for just $1. They were also giving away free winter coats, and I found a nice children’s place jacket.

3) There were free adventures in odyssey cds in great condition at the thrift store too (free Christian section). Might use for Valentine’s Day gifts for our co-op.

4) Bought printer ink on sale and in XL quantity for better unit price.

5) Buying more freezer produce, and throwing away nothing that way. Also it’s been a great time saver with soups/stir fries.