1. I sold an outgrown bike.

I used Facebook marketplace and no lie, the bike was picked up and paid for in less than an hour. At full price. 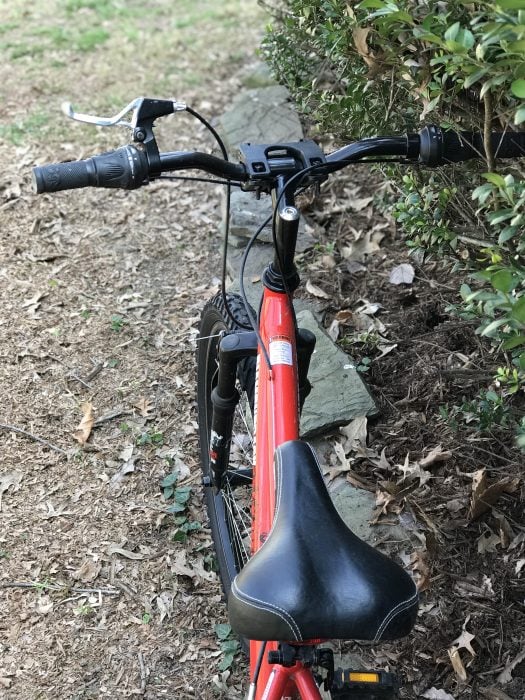 I was so impressed!

2. I sold the girls’ scooters for them.

They used to love these, but they’ve outgrown ’em.  So, I listed them on Facebook and they sold too, though not quite as quickly as the bike did! 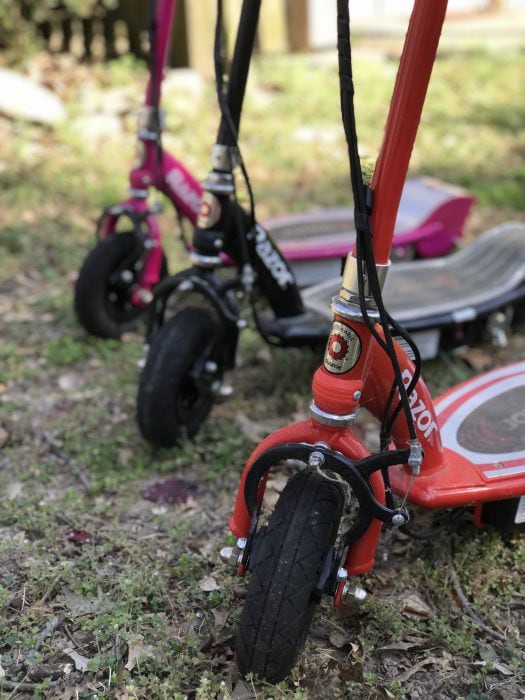 Of course, I’m giving the money from this sale to the girls, since the scooters were their personal possessions.

For whatever reason, I really hate listing and selling things. So I’m giving myself big gold stars for these first two frugal things.

3. I saved a broken hanger from the trash.

One of my kids broke the bottom part of a hanger. The top was still fine, though!

So I pulled the broken pieces off, use a wire cutter to trim the remaining staples, and used the hanger to hold a shirt, rather than a pair of pants.

4. I saved on a Jersey Mike’s gift card.

I had some credits at Sixth Continent, so I used those to pay for half of a $25 gift card, plus I’m getting $1.75 back in more credits from buying the gift card.

So, this will make for a nice cheap date night in the future.

(You can get a pretty inexpensive $25 gift card when you make a Sixth Continent account through my referral link. The deal is good for first-timers only.)

made dinner last night even though I didn’t feel like it. Also, I inadvertently took the toll-free route to Joshua’s rental. And we ate leftovers for lunch yesterday after church.

Your turn! Share your Five Frugal Things in the comments.

What are the advantages of selling items on Facebook marketplace vs craigslist or others like them. Have never sold anything online before Just curious

Well, there's a TON of traffic on Facebook, so your listing is more likely to sell there. Craigslist is just not as busy as it used to be, so it's a little tougher to find a buyer there. It's free on both places, though!

Love these posts, and looking through the comments. Always can find some great ideas and inspiration :) 1. Bought coconut milk yogurt on sale, then after Ibotta rebate, it's free. This stuff is $$$$!! 2. Bringing leftovers for lunch at work. I work in Berkeley, CA, the HEART of foodie nirvana (aka the Gourmet Ghetto). Always a success when I don't buy something to eat near my office! 3. Got a good walk in before work, then plan to go for a run after work. Good health saves lots of money long-term. 4. Randomly cleaning out my closet & selling items on Poshmark. Great way to get a little extra money here & there for items I'm no longer wearing. 5. Shopped early for my kids' Easter baskets, finding nearly free items. Since they're 17 & 20 yrs old, they'll get razors & deodorant along with some candy :)

What brand of yogurt did you buy?

Had a great week of frugal 1. Sold two pair of new sub zero Mt Hardware gloves for $90. I got them free at a free rummage sale. FB Marketplace! 2. Had a weekend trip to Philadelphia . Stayed at a hotel suite that had breakfast buffet included as well as weeknight “social hours” that included a light entree, soup and salad as well as beer and wine and you were also allowed to take food to your room. While the room/suite was a bit more per night then a regular room we more than made out with breakfast and dinner included for the three of us as well as being able to pack our lunches from the leftovers! 3. While in Philly I walked 3 1/2 miles back to the hotel from my conference which not only saved Uber fare but I had a great time exploring the city. 4. Our city has a monthly “free store” where you bring things you no longer need and take what you want. I got some spring clothes for us, a food dehydrator, books, a plant, and some homemade pins and magnets that my son plans to sell at local craft fairs 5. Picked up some free individually packaged snacks for our Easter baskets while volunteering at a local event.

Hi Kristen, I smiled at your no.5 visiting your son in his place, so lovely to hear Well done on making yourself sell those things I struggle a bit with this too & generally just end up donating but I have been thinking I should sell some of the things I don't want anymore; we shall see...:) 1. I fulfilled a loooong held dream to drive to work so early I could get a great park, walk around the local sportsground a couple of times, eat porridge in the work staff room for brekky & be early for the morning meeting. This meant I too had time to use a toll free road, & the trip was 30min instead of 50 saving me petrol too... I hope to keep this up :) 2. I have a members card for some op-shops here ( thrift stores) it cost me nothing but your accumulate points for every purchase no matter how small. I wanted a mirror for my powder room & I got a lovely one with a white painted wood vine pattern filigree frame for $11 as I had a $2 credit, I'm thrilled as it's just the sort of mirror I wanted. 3. I love traditional hot cross buns but only one shop sells sulphite free fruit ones but that bakery also has a rewards card so I got 6 hot cross buns & free loaf of my favourite wholemeal grainy bread 4. I love my hot cross buns re-baked in the oven so they are hot & then spread real butter on them...YUM; I don't have a functioning oven yet but a friend told me you can cook then in a sandwich press in baking paper - I did them in George! it tasted just like oven ones! (although he did squash them a bit but I don't care it was awesome) & cheaper than using or buying an oven :) 5. I am sick at the moment with a virus which is keeping me home more which saves petrol but I feel the need for more hot cross buns...(but with each bag of 6 I'll get a rewards stamp on my card!)

Donating is just so much easier. But then there's the whole money thing...

I hope you feel better soon!

1. Getting ready for a yard sale, I loaded up a bag of books. I found one that I hadn't read yet, so I read it right away instead of just laying it aside, It was a good story, so hopefully someone will buy it! Nicholas Sparks "the Choice". 2. Used up all the leftovers in the fridge in a yummy casserole. 3. Ate at home all week except for a church pitch-in Sunday night. Why does food always taste so much better when I don't have to cook it myself and I also don't have to pay for it?!!! 4. I'm not buying a new dress for Easter, even though they are on sale. Buying nothing saves more money than buying something, even if that something is on sale! 5. My local bank is having a special rate of 2.2 percent on a CD held for 22 months, I'm going to call tomorrow morning to get all the details!