1. I mended some washcloths.

I don’t know why I have such bad luck with these, but the hems on my washcloths and towels frequently come undone, even when they’re fairly new. 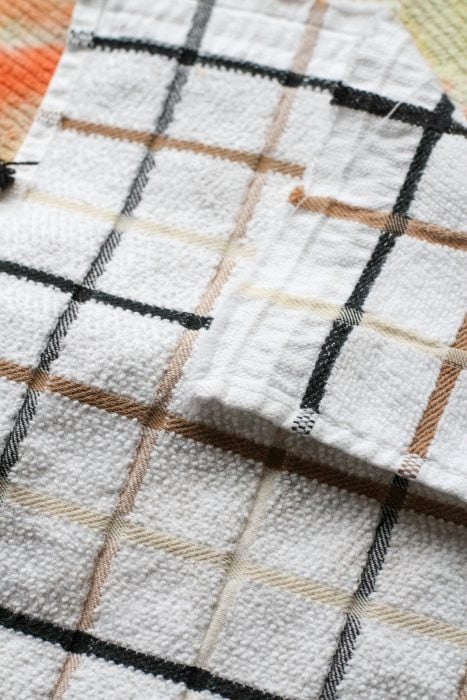 I sewed this one and a few older ones up, which was a nice quick job. 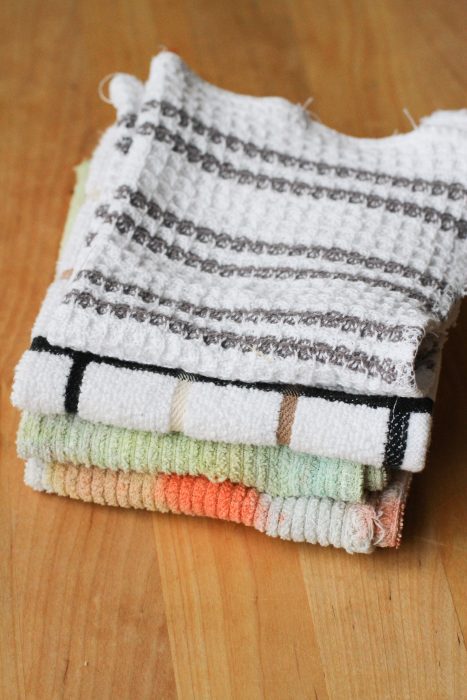 2. I mended a potholder.

One of my potholders was having a little malfunction. 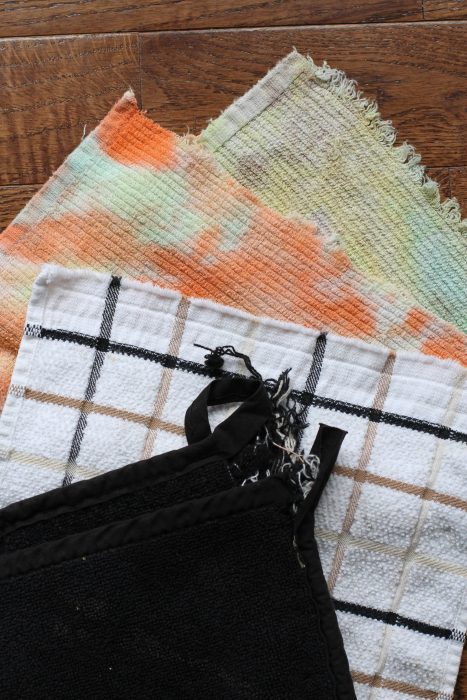 (Which, incidentally, was made worse by me ignoring the problem and washing it multiple times before repairing it.)

I thought perhaps this would be un-fixable, mainly because it would be too thick for my sewing machine.

But I trimmed the frayed parts, gave it a try, and happily, it went through my machine! 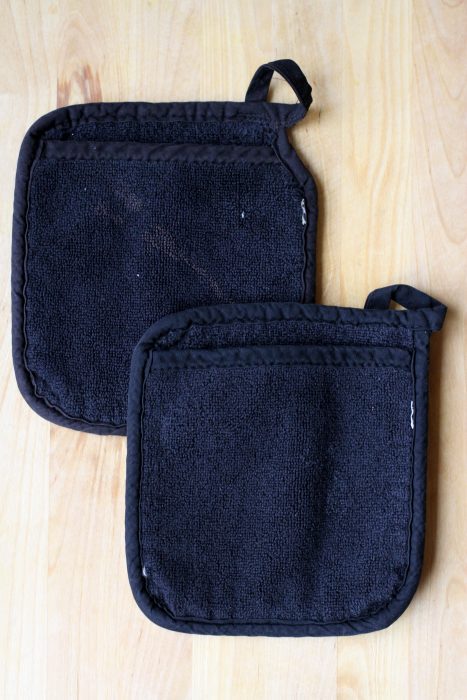 3. I used a small package for a return.

Mr. FG bought me some earrings for Christmas that don’t quite fit (I have teeny ear piercing holes, apparently!), so I needed to send them back.

Since I’m paying return shipping, I put them in a small padded envelope from my stash, which should cut down on the shipping costs as compared to the box they came in. 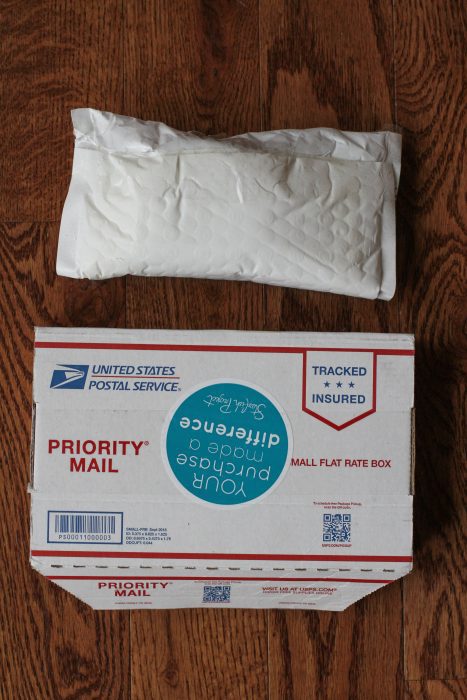 4. I used Romaine for wraps instead of Bibb.

My Aldi sometimes has heads of Bibb lettuce, but they had none this week.  So, I decided to just use Romaine leaves instead since I already had a bag at home. 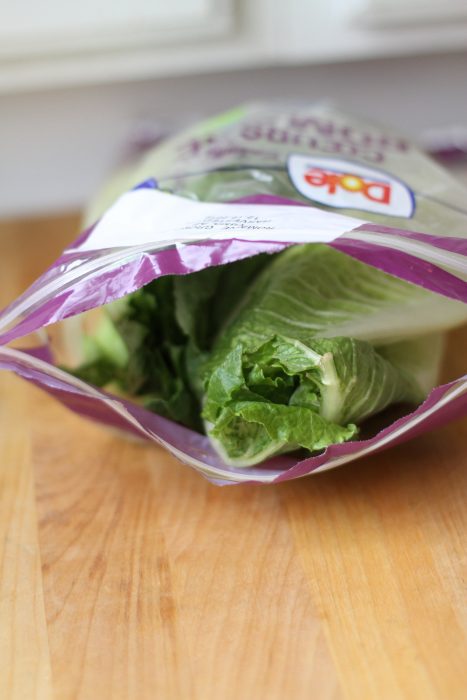 (Sizzling Korean Lettuce Wraps are what we were eating, in case you were curious!)

5. I called Cigna AGAIN about my bill submission.

This out-of-network stuff is no joke, people.

I resubmitted everything the way they told me to, and I got an EOB back saying that the bills were duplicate submissions. 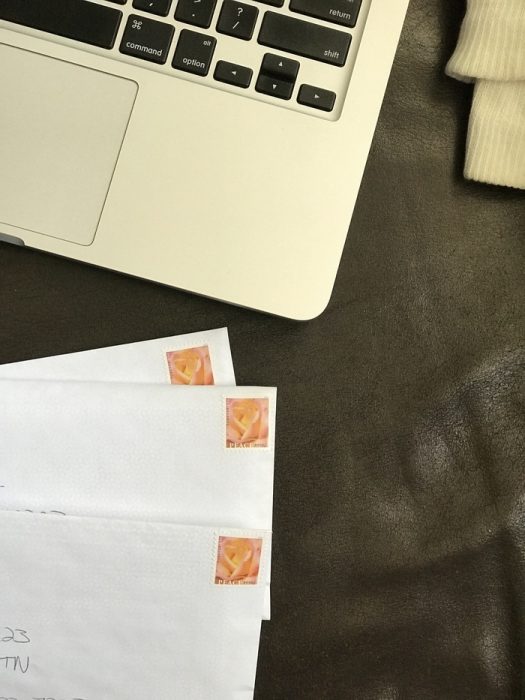 Ummm, yes. That’s because they told me to resend them! I even included a letter explaining what I was doing.

I called, and after a long phone conversation, it sounds like they are going to take care of this and get checks sent to us.

I will believe that when I see it.  My expectations are a little bit low at this point, but I’d be delighted to be wrong!

Your turn! Share your own five frugal things in the comments.

I hope you'll see this, Kathy. I have had no luck making liquid hand soap either, but here's that does work for me. Use a Method-type foaming soap dispenser. When the soap is gone, refill by pouring about an inch worth of liquid hand soap into the dispenser. Then carefully fill with water, leaving enough headroom for the screw-on pump. Shake well and you're set! Use slightly more or less, depending on the water hardness in your area, until you like the amount of foam the pump produces. Then mark the bottle with a Sharpie to make future refills easier. I buy the refill bags of Method Hand Soap when I find them on sale. They now last a l-o-n-g time. If the pump gets scungy, use a toothpick to clean out the crud, then swish in hot water to make it like new again.

Once you realize how much added water they add to make foaming hand soap, you will never buy it that way again. Unless, of course, you need a new dispenser!

1. Made frosting myself. Had never done it before and it was so easy! 2. Used the frosting on a chocolate cake made from a box mix using can of "coffee soda". No one in thr house liked the soda but they sure liked it in the cake so I'll be able to use those up for sure as treats. 3. Tried to make liquid hand soap from reg bars of soap but didnt work, did a load of towels and finally remembered to use it in place of laundry detergent. 4. Mealplanned since the new year, used a lot from the freezer, so grocery spending was very low. This week will be a bit more spending because we are out of things. The empty frig and freezer makes me feel like I accomplished a project though. I can imagine how Frugal Girl feels! 5. While not really frugal, I noticed on first paycheck of the year that medical/Hsa was not deducted and questioned HR straihht away. Turns out it was a glitch for numerous paychecks and will be fixed appropriately for next check. Double deductions then much better than not being on plan!

Don't know if I have 5 this week bur I'll see what I've got :) 1. Out with friends for breakfast & one insisted it was their shout - so nice 2. I live in a new location so spent some time on google maps today to find shops closer to me & plan errands 3. Got to work earlier than normal - less traffic & quicker (no idling in traffic) so saved petrol 4. Stopped using a hairdryer - finding out what my hair does naturally & surprised it doesn't look much different - & saves time getting ready! 5. Oh, I forgot I changed my loan repayments to fortnightly but the most minimum possible so that all the extra I pay goes 100% to principle

Most of my frugal bits this week are food and stock related. Because VAT went up as of 1 Jan, I bought some extras and some post-Christmas clearance items at the end of the year and this means the cupboard shelves are still pretty full. 1 I made muffins from (slightly) browning bananas 2 Leftovers have been dutifully eaten at subsequent meals (bonus: able to clean fridge before weekend produce shopping) 3 Stuck to shopping list (discount and special offers) at two shops 4 cooked and froze meals and meal ingredients 5 Freecycled clothes, books, and less favorite kichen utensils that had been kept just in case (for over 7 years) 6 Bought 2 items of winterclothing at reduced price. They were on my list and we are expecting frost and cold. I'll be cozy and warm!

Diane C- Sorry to hear about your injury! I hope it heals quickly!

Amy- I wish gas was under $2 here. What a bargain!

Here are my five frugal things: 1)Shopped around for car insurance. We ended up staying with the same company and saved $200+. 2) Bought bruised bananas at 35 cents/lb to make banana cranberry orange bread. I used the fruit basket that was sent from my in-laws that had oranges and tangerines. 3)Needed 2 windshield wiper blades and DH got them on sale for $8 each. 4) Sold some stuff on Ebay. Ebay claimed that I owed 80 cents to USPS due to a inaccurate weight to ship a package, so they charged me for it. The next day, they refunded me $1.60. Um, okay... 5) Went to the movies with DS2 to see Aquaman. We used a $50 gift card that someone gave us.