Sorry to have gone MIA yesterday! I’ve been watching the World Series games with Mr. FG (cheering on his Cubs), so I’ve been up a bit late.

(2 am after last night’s World Series win, to be specific. I’m kind of tired today.) 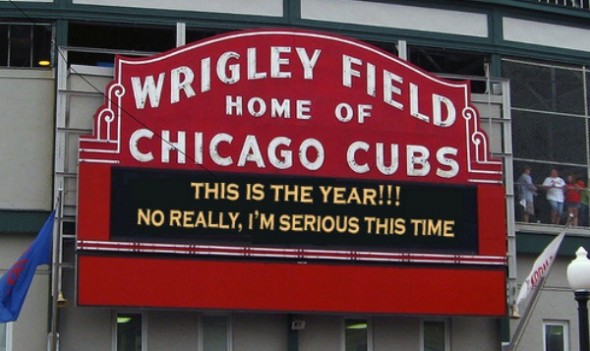 But the World Series is over now, so things should be more back to normal in my life.   I am super happy for Mr. FG that the Cubs have finally won a World Series.   Phew.   I was sweating bullets in that drama-filled game last night.

And Indians fans, I’m sorry for your loss.   If the Indians had been playing against anyone but the Cubs, I’d have been rooting for the Indians because boy, do I have sympathy for teams who haven’t won it all in a long time.

I don’t think I’ve had a notably frugal week, but we’ll see what I can come up with.

1. I’m filling holes in a deck board.

One of our deck boards has two fairly large gaps.   The board is otherwise in very good shape…I think these must just have been weak spots in the board. 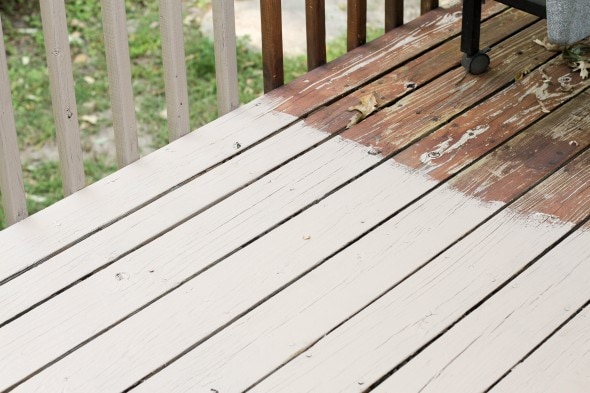 My dad suggested using a plasticky wood filler, sanding, and then using my deck stain over top.

We’ll see what happens. I figured it was worth a try before giving up on that board completely.

2. I cooked dinner each night.

Basic, I know, but cooking dinner at home for my crew of six is one of the most important things I can consistently do to save money.

I don’t know that this is especially frugal, but it IS something that’s easy to procrastinate on. I finished about 80% of the project at the end of August, but I never got around to getting on a ladder to finish the outside portions that can’t be reached from the deck itself.

So on warmish days, I’ve been putting my earbuds in, listening to podcasts, and doing the annoying brush work of getting all those last details stained.

It’s a plain-Jane door we bought 10 years ago, and we never painted over the white primer.

It’s got some dents and the primer was pretty dirty, but I scrubbed the door down and put some coats of paint on yesterday.   It’s not quite done yet and it’s not perfect, but the door looks SO much better than it did before.

And this is much cheaper than replacing the door.

(I’m brushing the paint on and I’m using a quart of Behr paint.   I like it pretty well, but I think I’m going to thin it out a bit before I do more coats. Thick paint is annoying to work with.)

Bahahahaha! You knew I had to throw that in there, right?

On a actual frugal note: we don’t have the channel that all the playoff games were on, so Mr. FG streamed them to our TV using the Roku and the FS1 app instead of paying the ridiculous sum the cable company wanted for the FS1 channel.

How about you? If you’ve got five frugal things to share, leave ’em in the comments!

I live for this moment when I get to come up with my five frugal things. Here we go:

1. One of the events today at work included a lunch, so there was one meal that I did not need to purchase or bring any food for. 2. Trick or Treating: my kids are still little (2 and 4) but really do not eat the candy that they received while trick or treating. Hubby and I now have snacks for a while! 3. Found a groupon for an oil change at our normal oil change shop and will save us about 40%...I'm over about 200 miles so I really need an oil change. 4. This one involves frugalness at work: I've been hosting "coffee & convos" events where we provide cookies and coffee to our students. There are always left over cookies and we know that our food service provider has to throw them away, so we bring baggies to bring them back to our office. We've had nice sweet treats all week. 5. This is by far the most fun frugal find of the week: A friend from church offered to give us a small blow up bounce house! Her work was giving it to her and her children (due to sensory issues) is unable to us it. So it is coming to us! Not sure where I will be able to use the bounce house during the winter, but maybe on a snow day, we can set it up in the basement as a treat! (This same friend has also been giving us multiple bags of hand me downs for BOTH kids) It's amazing when others generosity blesses you.

Thanks for the tip about the ALDI LED bulbs. I picked up a few boxes and put a couple to use right away.

I listened to a podcast tonight that I think you'd appreciate. It was freakonomics, and it was titled "In praise of maintenance." It's more or less about how it's not glamorous, but it's important to maintain things. They were talking about it on a larger scale, but it relates to the home too.

Indians fan here that went to the game last night and was surrounded by Cubs fan. Amazing turnout of Cub fans; I saw more than several groups of multi-generational family members going to the game, which was neat. We stayed around after the game to watch the Cubs celebration for a little bit. I am a history buff so being a witness to history MAY have dulled the pain of the loss. Going to the game was a frugal fail but we paid face value for the tickets thanks to a generous friend, being at a World Seies was priceless, however!

I'm sorry your team didn't win! I do hope the Indians get to end their drought soon.

I heard that the majority of tickets for game 7 were sold to out of town fans, so I'm not surprised to hear that there were oodles of Cubs fans in the house!