After reading Overdressed, I decided to go through my own summer wardrobe. I don’t tend to own oodles of clothes, but I was still surprised to see how many clothes lurk in my dresser.

I really want to own only clothes that I use (because the right amount of stuff is the amount you can use!) and I knew there were some things in my drawer that I don’t regularly use. 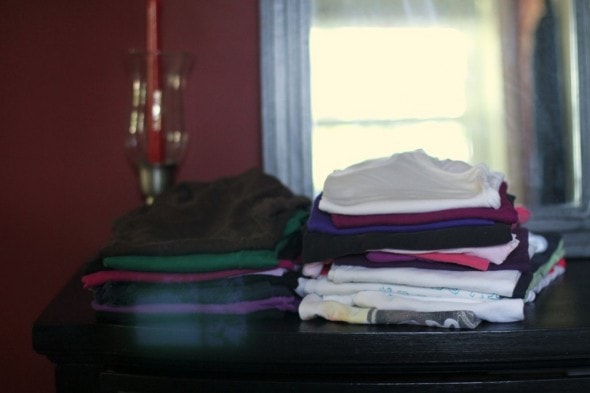 So, I decided to employ a method I used when I was trying to figure out how much jewelry I should own. Basically, you put it all out in plain sight and then only put away what you wear.

This method works well for me because I can see everything I own. That way, if I don’t wear something, I know it’s because I don’t like it, not because I can’t see it!

To begin, I took them all out of the drawers, tried them all on, and separated them into a couple of piles.

This pile is stuff that’s in good shape but that I really don’t like or that doesn’t fit me properly. It’s headed to Goodwill. 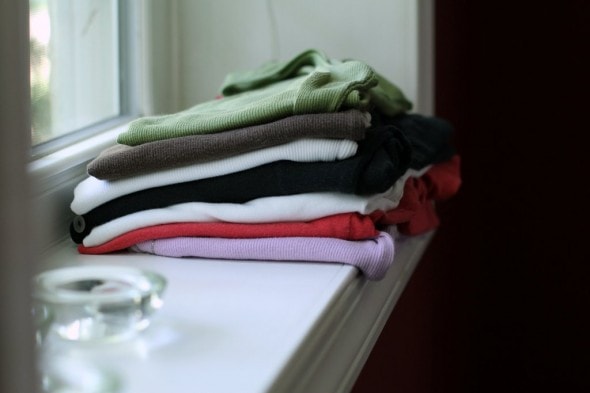 These two piles here are shirts that aren’t wearable but that aren’t in good enough shape to be donated. The pile on the right mostly has holes (so, they’re going to be rags or bags or something!) and the pile on the left has yellowed armpit problems.

I haven’t known what to do about that in the past, but I did some googling and I’ve found that a mixture of hydrogen peroxide, washing soda, and water works pretty well.

I tried it on a couple of other shirts first, and now I’m out of hydrogen peroxide, so the rest are going to have to wait until I get to the store. 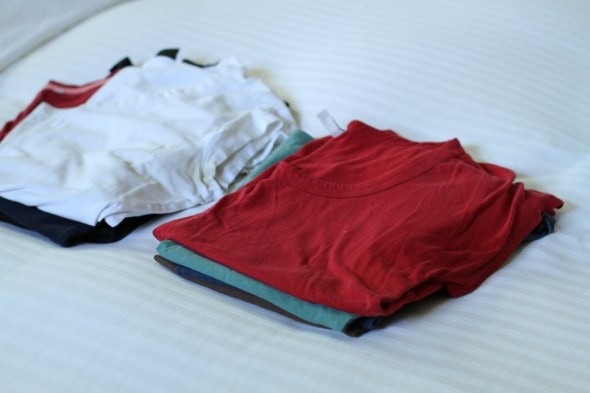 If the hydrogen peroxide trick doesn’t work (these stains are pretty set-in!), then those shirts will go into my rag pile too.

So, then I’m left with two smallish piles of things on top of my dresser. The original piles were a little bigger, but by the time I took a photo, I’d worn several shirts and put them into my drawer. 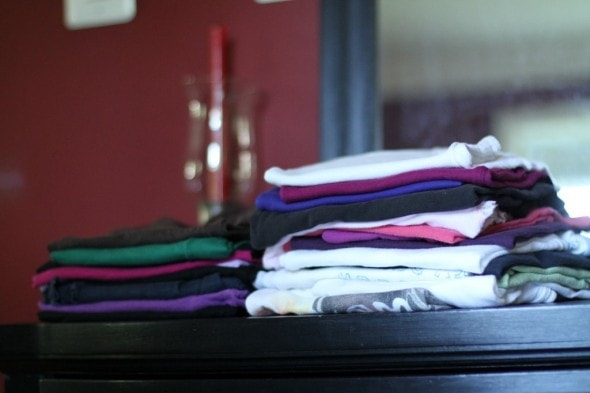 In addition to these shirts, I also own a few neutral-colored cropped summer sweaters. But I know I wear those regularly (I bring them with me when I go into stores/restaurants in the summer because the A/C is always so low in those places!), so I didn’t think they needed to live on top of my dresser.

In a few weeks, I’ll feel like it’s safe to assume that I’m not going to need the shirts that are still left on top of the dresser, and they’ll go into the Goodwill bag.

I’m really curious to see how many will be left, and I’ll keep you posted!

I just have one suggestion for giving things away.... Look to see if you have a Salvation Army instead of Goodwill in your area. I wish I had the statistics info handy on these charities. It's really enlightening as to what the CEOs make, etc. I used to love Goodwill, but now all of my donations go to Salvation Army, the YWCA or a local shelter.

What's weird is that there are way more Goodwills around here than Salvation Armys. I wonder if that varies by region.

no one has any suggestions for my jewelry question? ack!

Stephanie - Try using necklace charms as decorations on picture frames (you can buy plain ones at Dollar Tree) with pictures of the one who made it for you. Rings - Glue to the base of a lamp shade for decoration? Bracelets - link all together with the clasps and make a necklace or can also use to decorate picture frames or lamp shade. Not to make your whole house look like "Crazy Aunt Edna" decorated it, just trying to think of helpful ideas. You can also hot glue the charms/beads/stones to circle shaped magnets from the dollar store and you now have pretty, original, memory inspiring magnets!

I don't know if this is the same recipe you use.... but this is the recipe I use for Yellow armpit stains and almost any other stain as well! It's AWESOME and works on both whites and colours. http://www.onegoodthingbyjillee.com/2011/11/goodbye-to-yellow-armpit-stains.html Yay for having only what you use! We have a hanger rule in our house... if you don't have a hanger for it you need to give something away. (of course that doesn't work for the folded stuff, but it's definitely a good start... and saves us from having to buy more hangers!)

I'm the same way with the hangers. If we run out, I know something needs to go!

OMGosh I *LOVE* this. I'm in the same boat and I'm going to start your method today of finding out exactly what's worn so I can eliminate the rest. I don't collect oodles of clothes either but I definitely think I need to cull down to just what I'm wearing. Off to my closet - thanks for the inspiration!

People insist on allowing Unions to demand luxurious pay and benefits and then they are outraged that companies have closed down in America, or have been outsourced. It is called killing the golden goose. Our entire nation has been destroyed by Union greed. I no longer worry about where anything is made, as I shop in the thrift stores quite happily.