, which is basically about consumerism. 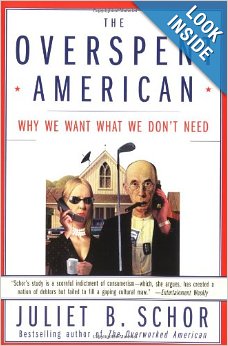 It was written back in ’98, which means that some parts of it are a bit outdated (the giant cell phone on the cover photo might be your first clue), but if anything, the patterns Schor saw in the 90’s are even more pronounced now.

We haven’t gotten less consumer-y since then, in case you hadn’t noticed.   😉

Anyway, I was reading a passage the other night about cultural expectations, and she said:

“Psychologically, it can be harder to hold the line on gift buying than on purchases for oneself.   One reason is that within social classes, or lifestyle groups, there are real norms about gift giving.   If the customary outlay for wedding gifts in your circle is $150, it may not be acceptable to spend $75.   One of my acquaintances reports that she lost a friend by doing just that.”

Putting aside the fact that I think $150 would be a lot to spend now, let alone in 1998, I’m really disturbed at the idea that a friendship could be broken over something so dumb.

Because here’s the thing…a gift is a gift, not a debt.   It’s not something that you owe to someone else, and when you get angry that someone else hasn’t spent enough on you, I think you’re treating it more like a debt than a gift.   When you have to spend a certain dollar amount in order to avoid the wrath of a friend, that kind of sucks all the joy out of gift-giving.

And I think that’s kind of sad, because gift-giving can be really, really fun when it’s free of expectations.

(Zoe is very fun to give presents to, in part because she has low expectations.   It doesn’t take much to really blow her hair back!)

I also think a reaction like this places way too much value on a dollar amount and not enough on other aspects of the relationship.

I mean, I do get that we want relationships to be reciprocal.   If you are the only one pouring time and effort and energy (and money) into it, it’s not much of a relationship.

But suppose you have a friend who is a gem in every way, but who gives you a gift that’s less expensive than what you gave her.   The lower dollar amount shouldn’t negate the gem-like qualities she contributes to the relationship, you know? 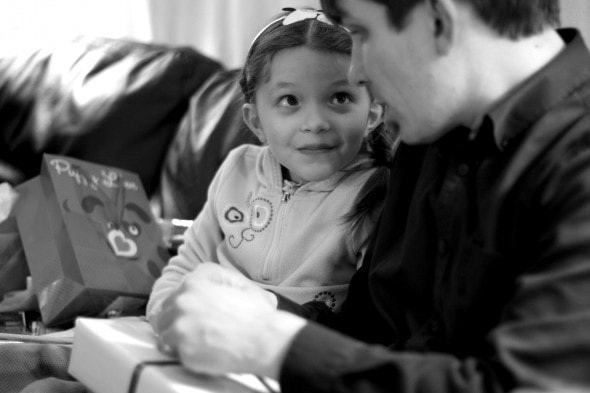 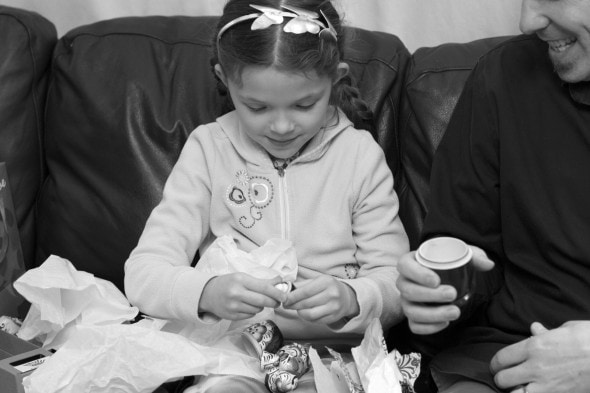 I think this story also bothered me because a dollar amount isn’t the only thing that gives a gift value.

When Millicent shared her list of non-frugal reasons to be frugal, she pointed out that a homemade gift may cost only a little, but it can still be a really lovely item that’s full of meaning.   Often, this kind of gift requires a big time investment instead of a monetary investment, and I think it’s a mistake to overlook that kind of value.

Also, I personally think that the key to effective gift-giving is to study your gift recipient.   If you don’t do that, then even an expensive present might not have much meaning.

I don’t know…maybe I just don’t move in the kind of circles where these high gift-giving expectations are common, and maybe I am the odd duck when it comes to how I look at money and gifts.   Be that as it may, I think the whole thing is ridiculous and misguided, and I think a friendship that can be broken over a monetary difference in gifts is a friendship that is probably not worth having.

Ok.   I think that’s all the brain-dumping I need to do on the topic.   Thanks for indulging me.

And please do share your thoughts!   I always love to hear what you all think.   Have you ever been in a relationship where gift-giving expectations were so clearly defined?

P.S. Simply Being Mum is hosting Food Waste Friday this week (go check out the lovely cake she decorated!).

P.P.S. My $1000 Target gift card giveaway is still open.   You just need to leave a comment to enter-easy peasy!

I am a (young!) 70 year old single woman with a modest income who lives in an expensive county in California. I am the only one of my friends who still has a mortgage. I live in a small, one-bedroom condo. I have loved gift-giving all my life, from flea-market finds to handmade treasures - and everything in between. And now I struggle. I have a close friend who is wealthy and who places a lot of merit and importance on gifts. I simply cannot keep up and it is hurting me. I gave her a small, beautiful orchid for her birthday and her children gave her a $1,000. ring. This is a woman who has so much expensive, one of a kind jewelry she open a store with it. Most of it is locked up in a vault. I find myself feeling so resentful and uncomfortable. I want to stop the gift-giving entirely but both she and one of my sisters keep giving. I actually don't want anything at all, I'm trying to get rid of things. I don't want anything (okay, a gift card would be so helpful, but neither believe in gift cards. Most of what they give me ends up at Goodwill. They have big houses to store unwanted gifts away - the whole thing is such a mess! What to do?

That is such a hard spot to be in. And I'm not even sure there is a lot that YOU can do about it. The sticking point seems to be her expectations, and I don't think you can do much about those.

The only thing I can think of is an honest conversation with your friend so that she understands where you are coming from. I hope that, if she is truly a good friend, she will listen and understand!

Preaching to the choir! So with you on everything you just said.

We have friends that would invite us over. They would purchase prime rib-crab legs-or even lobster. They would rant about the cost and the difficulty in preparing the meal. It was wonderful to be treated but I cannot afford-nor do I have the talent to prepare a reciprocal meal when they come to our house. They would also prepare six different additional sides to go with the meat. The ongoing comments for them about the "deal they got on the prime rib" was always hard to swallow. At first, I tried to keep up and then a week later feel sick because of the cost. Finally I gave up. I started making things that they can't or don't make. I make homemade pizza that's wonderful....I make homemade bread...homemade wonderful desserts. These are all things that they wouldn't make. No, I am not matching them $ wise-but I feel like I am giving them my best meals. Rather than matching dollar to dollar I decided to match my best to their best and that works out much better. I don't feel sick about the whole deal anymore. They are good friends but I do think they turn everything into a competition....that part is annoying but I've learned I'm okay with just letting them win because I don't want to play the game.

It's shocking that someone would attach a price tag on their friendship - that relationship was probably not worth keeping anyway. I personally don't care how much the gift costs as long as I'm getting one! But when I go out buying things for others, I am totally aware of the expectations some people attach to the stuff I give them. It's not an ideal world.

I can't imagine that any caring person "expects" to receive a wedding gift of a certain dollar amount. Do these couples screen their guests based on their income, scratching off anyone who can't afford to be their friend? So incredibly sad. You spend what you want to spend (and hopefully can afford) on your wedding. Your friends should never be expected to pay you back dollar for dollar for the "privilege" of attending your wedding.

My bridesmaid story: When I was a freshman in college, a girl I'd known in high school asked me to be in her wedding. I didn't know her very well, so after much thought, I politely declined. I have not seen or heard from her since. I later found out she had seventeen bridesmaids!