This is a mis-matched pair of socks. 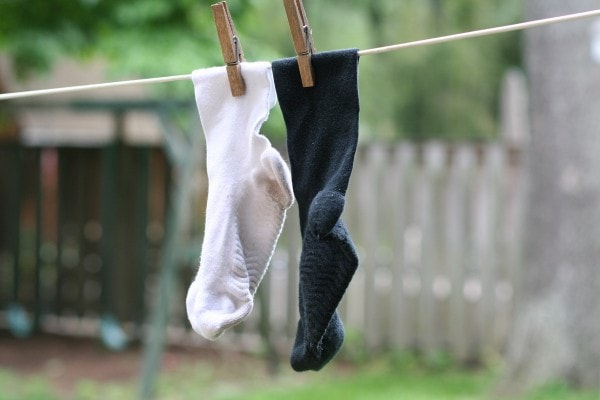 I originally owned a white pair and a black pair. They were lovely and cushy and I got them for free after a rebate back in the day when I managed to make it out to Rite-Aid to score deals.

One of the white socks sprung a hole, though, and so did one of the black ones.

So, I started wearing the non-holey socks as a mis-matched pair. Unfortunately, the remaining socks began to wear holes this past winter.

They’re still cushy socks, though, and they’re one of the few pairs I happen to own that aren’t ankle socks, so they are nice and warm.

Enter a pair of ankle socks from Aldi. 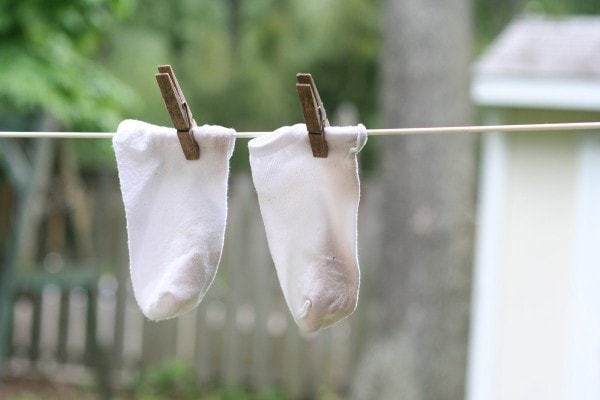 To keep myself toasty warm in the colder months, I put on the Aldi socks first and then layer the mismatched cushy pair on top.

This is the sort of nitty-gritty frugality that simultaneously makes Amy Dacyzyn smile and the rest of the population groan and roll their eyes.

The interesting thing about this is that the person that’s wearing these uber-frugal socks is also the person who plunked down $1600 for a camera.

I make my own bread, I refashion old clothes, I shop at Goodwill, I live (mostly) without a cell phone, and I use broken things until Mr. FG insists I stop.

But I also go on vacation every year.

(assuming that a person isn’t in a poverty state…in that case, frugality is about surviving)

If I spent big bucks on groceries, clothing, a cell phone bill, and I bought new items all the time, I wouldn’t have enough money to buy a camera or to go on vacation.

I personally would rather have a vacation once or twice a year instead of a cell phone and regular takeout meals.

And I’d rather cobble together a pair of socks than go without a camera.

That’s what mindful spending looks like for me. If you spend your money mindfully, your budget will probably look different than mine. Maybe you’d prefer to buy clothes instead of a camera. Or maybe you’d rather get takeout frequently than go on a yearly vacation.

So, I’m not going to encourage you to save up for a camera unless you want one. And I’m not going to insist that your mental health requires a vacation. What I do want is to urge you to take stock of your spending and make sure that your money is going where you really want it to go.

If you’re wanting to use your money for something but haven’t managed it yet, see if there’s a place in your budget that could stand some trimming. If you can cut your spending in a place where it doesn’t much hurt (apparently for me that’s my sock budget), maybe you can free up some cash for something you really, really do want.

Do you scrimp and pinch in one area and splurge in another? Inquiring minds (mine!) want to know.

I stumbled upon your website while looking for ways to change my own spending habits. I have started sewing up small holes in my socks within the last few years. This does seem to prevent the hole from growing and it's easily hidden because holes usually start in the heel and toe and other places hidden by a shoe. My favorite shoes are Mary Janes, and you usually see part of the sock in these, so the color matching thing has a higher priority for me. I have started to buy more flesh colored socks because they will either appear to be bare skin or serve as a neutral color. I did start spending more for shoes within the last couple of years. The better shoes have only cost about 50% more that what I was previously spending at Walmart, but they seem to last at least twice as long. It saves me time shopping and trying on new shoes, it also saves the money and gas (because without Walmart and Dollar General shoes, I have to drive 45 minutes to a mall). I appreciate extra time whenever I can get it, even if I end up wasting it on Facebook.

I wholeheartedly agree! I've felt for a while that one's checkbook (or debit statement, or however you keep track of things) speaks volumes about ones values! If you are interested in discussing an online children's clothing exchange that helps keep your balance in your "what matters" fund up as well as the balance in your "what doesn't matter as much" fund up, check us out at www.clothingloop.com and join the discussion! Lindsay

You make such a good point, and I appreciate you realizing that what is important to one person or family may not be important to another. Before we had children we saved everything we could so that I could stay home with the kids. When the kids got older and I went to work outside our home-I hired a cleaning woman every few weeks so that I could spend more time with the kids when I was at home--and even more significantly the amount of stress it reduced for me so that I was a happier, more relaxed person more of the time. Now, I work full time, my kids do a lot around the house, I make my own laundry detergent, we make almost all of our own bread, I make much of my own cleaning supplies, and we rarely go out to dinner or pick up dinner--and I get manicures. I honestly would rather make my own stuff and get manicures than buy bread, detergent, cleaning supplies and not have nice nails.

I should add that the reason I like manicures is not only do I get to have nice nails for a while (and I have soft, icky nails), it means for an hour every few weeks no one can ask anything of me. No one bothers me while I get them done--and of course I can't do anything when they are drying. ;)

I so agree with you - this is how we do life and I have a pricey camera too!

I learned how to darn sock holes this winter :) I used to use holey socks as rags and now I can darn them.

This posting is my favourite of all your blogs. It says what I feel and have been feeling guilty whenever I splurge. I will be moving into a condo and spent more than necessary on my induction cooker since I hv a passion in cooking. It is the first thing I hv spent on myself that I have not settled for less. I know that I will make good use of it through the years yet my many years of buying the practical vs want is a hard habit to break. thanks for this blog. Really needed it.