As you know, I have a grilled pizza recipe on the blog. 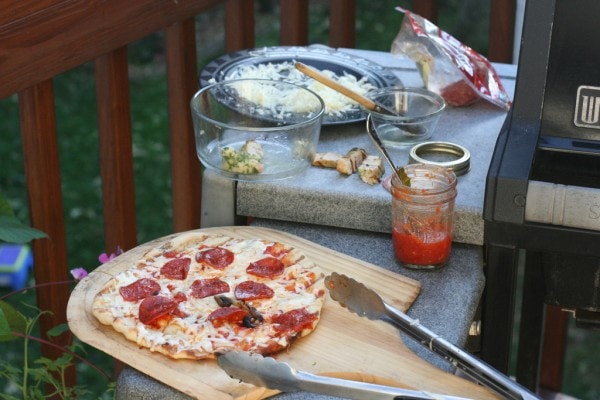 It’s a decent recipe (or I wouldn’t have posted it!), but in a Cook’s Illustrated magazine (which I got from the library), I saw a really intriguing recipe for grilled pizza. 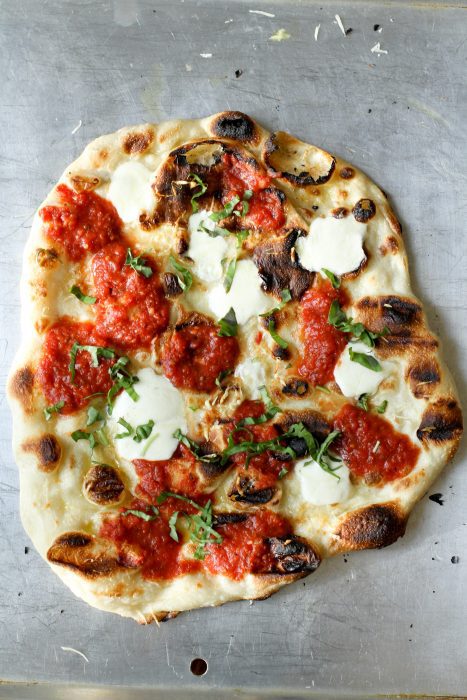 This version calls for making the dough 24 hours-3 days in advance (handy!!) and when you stretch the dough out, you do it in an oil-covered half-sheet pan (the oil on the dough helps it to crisp on the grill). 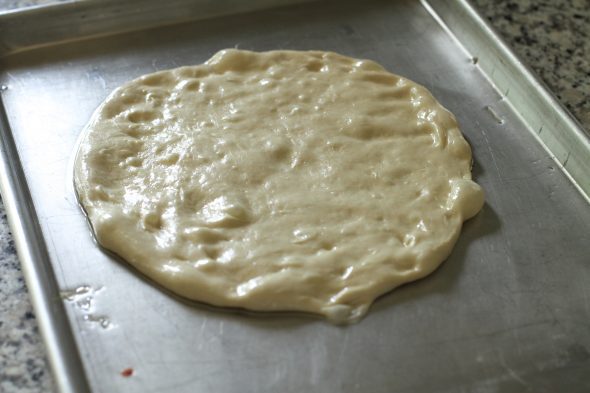 Unfortunately, I ran out of propane right as I was about to put my first pizza on the grill.

(I’d heated the grill up just fine, but then when I went to use the grill, I noticed the temperature was steadily dropping. And I’d forgotten to order a refill for my spare tank. Whoops.)

Since I was already so far into the recipe, I ran out to get some propane and then carried on. 😉

We all thought this was quite delicious, and definitely a step above the grilled pizza we usually have. 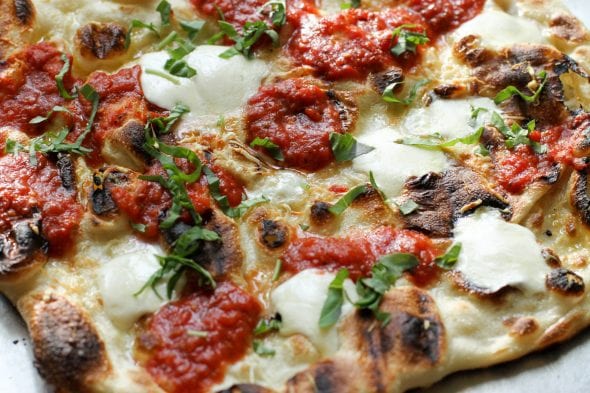 The sauce was bright and simple, the fresh mozzarella was a nice change, and since the crust was made with King Arthur bread flour, it was really chewy and flavorful.

That flour SERIOUSLY makes a difference in pizza crust, you guys.   Totally worth the extra few dollars per bag.   I’m too cheap to use it for all of my baking, but I do use it for pizza.

(Side note: I just looked up the KA bread flour on Amazon, and it’s only $3.69 for a five pound bag through Prime Pantry. That’s a very affordable price!)

Regardless of where you get it, you should buy a bag if you want to elevate your pizza crust. 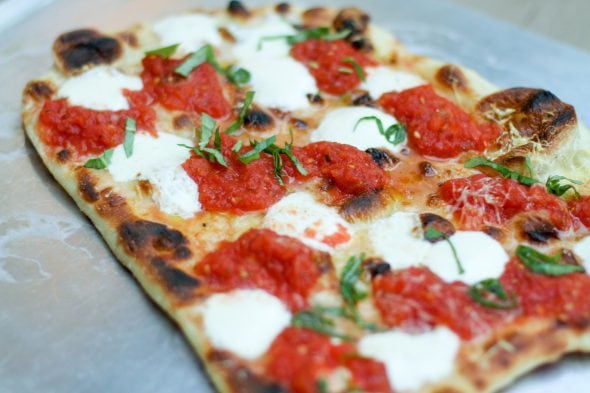 I did have a problem with the bottom of the crust getting too dark before the cheese melted, so I finished the pizzas under the broiler.

I think I’ll do some tinkering with my grill temperatures to allow me to avoid the broiler.   Not that it was a big pain…the broiler is quick and easy! But it’d be nice to keep it all on the grill.

And then I’d also tweak the tomato sauce. It was super tasty and very easy, but also a little on the watery side, especially once it hit the pizza.

A quick drain of the sauce through a sieve next time would help to fix that.

And I am very pleased at the thought that I could make grilled pizza dough up to three days in advance. So fabulous.

What new dish did you make this week?

P.S. On the topic of propane tanks: if you live in the Washington DC, Dallas-Fort Worth, Philadelphia, Atlanta and Denver metro areas, you can get a propane tank refill delivered to your front door for only $10 if you’re a new customer.

I tried Propane Taxi years ago with a $10 introductory offer like that, and I’ve been hooked ever since. So much easier than lugging the tank to Home Depot. And it works great as long as you remember to get your empty tank filled (which is what I forgot to do this time around!)

(I’m a paying Propane Taxi customer and they didn’t ask me to post. I’m just sharing the refer-a-friend, $10 off link that every customer gets.)

I went to a conference (The kneading conference in Skowhegan ME) last year where the author of this recipe from Cook's Illustrated presented it and it's been a total game-changer! I'm in no way the pizza expert he is but I might have some insider info if you have questions. :). The bubbles are a-mazing and the micro-fried bread is sooooo good (hint: don't hold back on the evoo)! I only wish it wasn't such a pain to get out charcoal grill going or this would be on the menu more frequently. :) Thanks for spreading the word!

DH is the griller/propane filler in our household, but we're lucky enough to have a gas line in our new house, so we only need propane if we're using two grills. I read recently that pre-filled propane tanks are typically not "full". The article suggested that it's a better value (i.e. you get more gas in the tank) to take it to a propane dealer that fills your tank manually. We use so little now, that I totally forgot to ask DH. Since the topic has come up here, I just thought I'd mention it in case it's useful.

Oh, interesting! I didn't even know you could go get yours filled manually.

I took a pizza tour when in New York and was introduced to the pizza steel. It's heavy, but makes amazing pizza on the grill or in your oven. Cooks Illustrated had me years ago trying pizza straight on the grill. This pizza steel has pushed my pizza game up a notch. I will use my pizza stone too... but only if I'm using my oven and want to do more than one at a time. My New York pizza snob friends thought it was an excellent piece of home!

That Grilled Pizza Looks DELISH ! What is the Pizza Dough recipe called that you used ?

& I didn't make yet but I'm going to be trying to make the Chicken Madeira (from the Cheesecake Factory)soon. I found a recipe on YouTube that looks most like it. & I learned from a cook that the chicken is egg washed before cooking. I had went there for a Belated Birthday dinner & 2 women I sat next to were eating it. & I excused myself & asked them what they were eating & they told me what it was. I was soooo glad they were there. It's a pricey meal $18.95 for 2- Chicken Breasts w- Madeira sauce & mushrooms over Swiss or mazzerella cheese & 2 Asparagus spears on each & Red Mashed potatoes. But if I get this Recipe down I LoL definitely be making this a family Meal

Kristen IF you or anyone of your readers have made this Please I feel you could Share. I just need to find new Madeira Wine somewhere. I don't drink or cook w- wine so I know Nowthing about it or I would have made this dish already

I have found Todd Wilbur's recipes to be pretty spot on for restaurant copycats. I have made quite a few. The PF Changs Mongolian Beef is a favorite.

If you want KA flour and have room/money to stock up, look for deals around the holidays. That's when most baking goods go on sale and coupons are available. The usual price at my store is about $3.75/5 lbs. A couple of years ago sale + coupon = $1.70/5 lbs! That was cheaper than Gold Medal or Pillsbury.