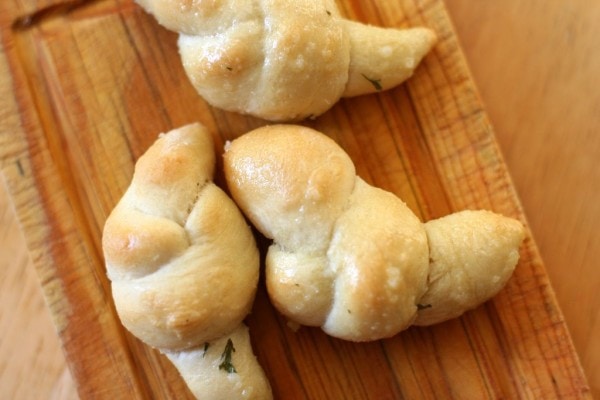 Garlic knots, from what I gather, are a pizzeria specialty, but I’ve actually never had them in a pizzeria. I heard about them from a co-worker of my husband’s who wanted to know if I’d ever made them. Always up for a baking challenge, I did a google search and came up with a recipe from Epicurious.

Because I’ve never had the real thing, I haven’t the faintest idea about how authentic-tasting these are, but I can tell you that if you like garlic, you’ll probably like these!

The recipe calls for 2 pounds of pizza dough, so you can use the pre-made refrigerated sort or you can make your own. As you may have guessed, I make my own. 😉 Any basic pizza dough, like this one, will work fine.

2 pounds of pizza dough makes a lot of garlic knots, so if your family isn’t enormous, you may want to halve the recipe.

Before you start shaping the knots, turn your oven on to 400 ° F so that it will be nice and hot when your knots are ready. 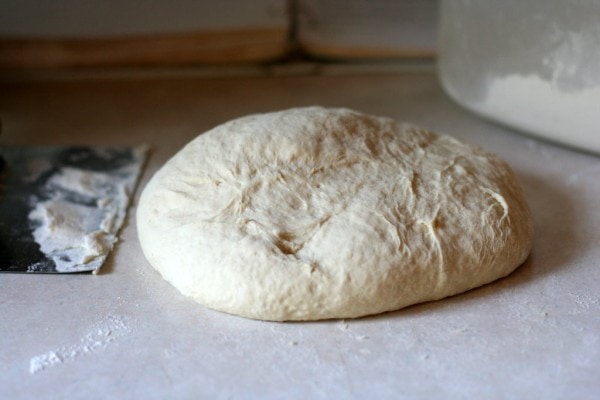 There are two different ways to shape the knots, but for either method, you’ll need to divide the pizza dough in half.

For the first method, roll half of the dough out to a 10×10 inch square. 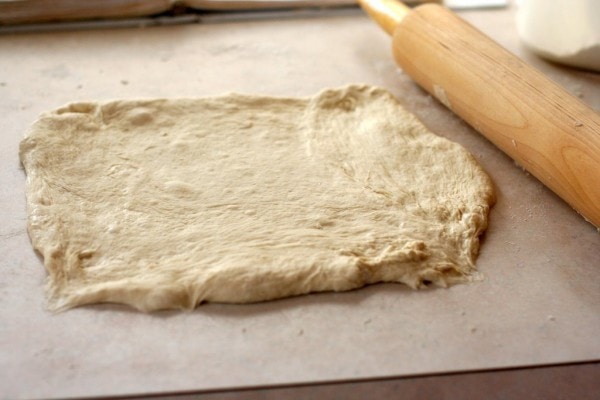 Using a pizza cutter, cut the dough in half down the middle and then cut each half into strips. 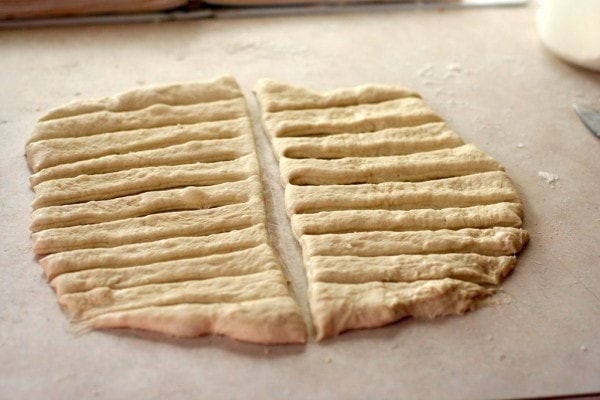 Tie each strip into a knot and place into a greased baking sheet. When I use this method, I find that I have to dust each strip with a fair amount of flour just to make it manageable, so I’m not really a big fan.

I prefer to cut the chunk of dough into 20 or so pieces and roll each piece into a snake-like shape before tying it into a knot. It’s less frustrating and less sticky for me!

Bake the knots in the preheated oven for 15-18 minutes, or until they’re lightly browned. While the knots are baking, mince some fresh garlic and mash it together with salt to make a paste. Stir in olive oil (or butter or another fat that you like). 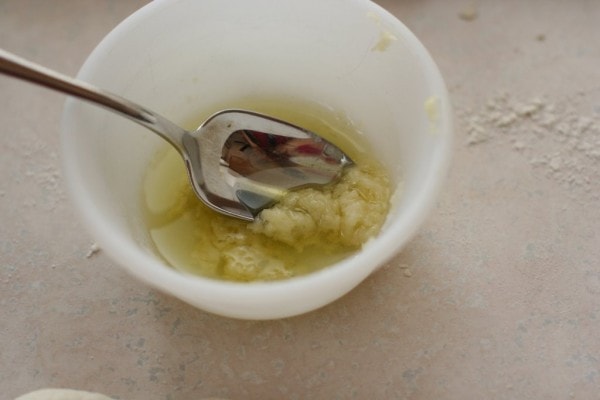 When the knots have finished baking, toss them with the garlic mixture in a large bowl. A lidded bowl works great for this because you can just shake the bowl until the knots are all coated.

If you’ve got fresh parsley and Parmesan cheese around, sprinkle both on top of the knots and toss the knots again to coat them.

I happened to be completely out of Parmesan cheese this go-round and I only had dried parsley. Hopefully you’ll be better prepared than I was! 😉 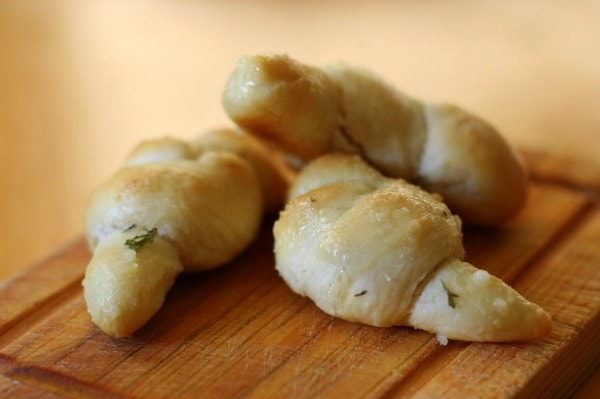 Fortunately, these are still really yummy even without the Parmesan cheese. 😉

Cut square in half with a pizza wheel or a sharp heavy knife, then cut each half crosswise into 15 strips (about 2/3 inch wide). Cover strips with a clean kitchen towel.

Roll out and cut remaining dough, then form into knots, arranging 1 inch apart in staggered rows on second baking sheet.

(or cut dough into 40 pieces, roll each into a pencil-like shape and tie each into a knot)

While knots bake, mince garlic and mash to a paste with salt, then stir together with oil in a very large bowl. Immediately after baking, toss knots in garlic oil, then sprinkle with parsley and cheese and toss to coat. Serve warm or at room temperature.

Good morning! I'd like to make these but at two separate times today. I'd make the dough in the morning. I'd take one-half of the dough, twist them into knots, season and bake. They are going to be part of a meal that I'm preparing for someone and I'll need to bake them before driving across town. The other half of the dough is for my family. Should I refrigerate dough and then tonight before dinner, remove from fridge, bring to room temp, and continue to proceed with recipe? The second batch of knots from the refrigerated dough should rise up fine, right? Crescent rolls do, the ones in the can, from the store. Thanks!

Yes, just keep the dough in the fridge until you want to use it. You'll want to give it a little bit of time to warm up out of the fridge, but other than needing some time to warm up, it should behave like usual.

oh. my. goodness. These were awesome. Garlic is its own food group. Nice one!

I made these last night to go along with our homemade pizza. They were a big hit with my husband and kids and they all requested leftovers in their lunch boxes. Thanks!

I'm originally from NY and cannot find a decent garlic knot in my current home of California to save my life. Whenever I visit back east, I eat way more garlic knots than are good for me. I think I'll have to give this recipe a shot, as my husband has asked at least a dozen times if I know how to make garlic knots.

These look fantastic! I wonder could you make something like this as a dessert with cinnamon sugar topping? Hmm...