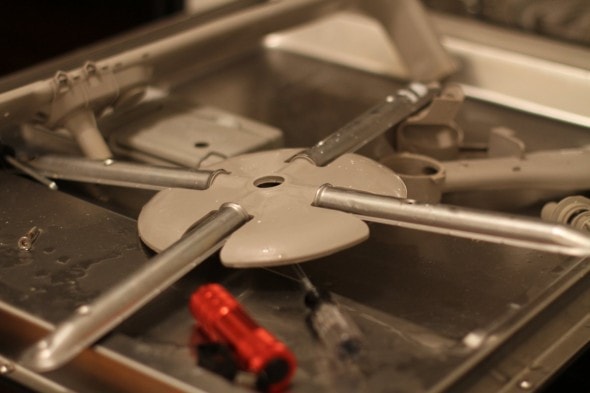 Last night, I started the dishwasher and began handwashing the other dishes (the official dishwashing person is sick).   After a few minutes, I heard a dreadful noise, and at first, I thought it was something outside.   Then I looked down and realized to my horror that the sound was coming from the dishwasher.

I switched it to the rinse cycle to troubleshoot it a bit, and still the sound persisted.

Mr. FG (who was also sick on the couch with a 104 ° fever. Oy.) did a quick Google and found that something was probably stuck.

A number of years ago, he and I had taken apart the dishwasher and cleaned it out, so I knew this was not an impossibly difficult task, and I also knew I mostly remembered how to do it.

I also knew that I am waaaaay too impatient about broken things to wait for him to be unsick, so I decided to do it right away.

I had a top and bottom rack full of wet dishes to be washed, after all. 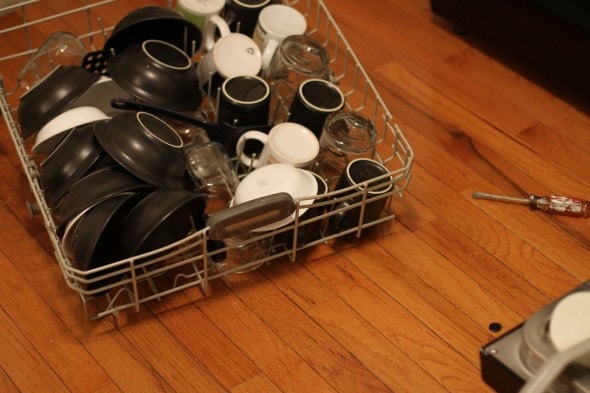 I took the top and bottom racks out and began removing the upper and lower spray assemblies.

(I have no idea if that’s the official term, but it sounds legitimate, right?   Right??)

Even before I got the last dishwasher part removed, I could see the problem: a toothpick, swollen with water, was jammed down into the chopper area of the dishwasher.   No wonder things weren’t working right!

Plus I wiped out a bunch of slimy goop.   The goop, which seemed like soap residue, was mostly on the top part of this grey circle. 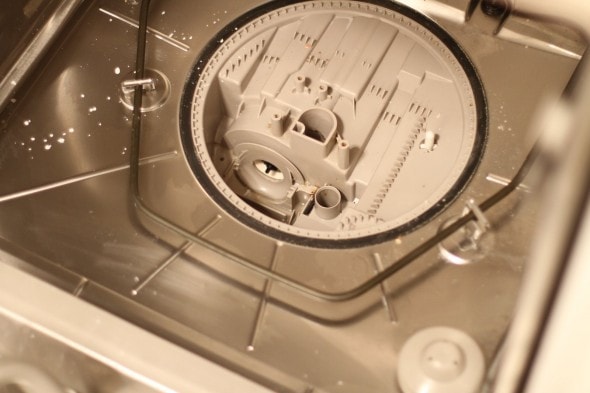 Aren’t you glad I waited to take a photo until the goop was gone??

The only part I got stuck on was removing the chopper cover (I didn’t want to pull too hard and break it!), but Mr. FG googled it, and it was so easy…just lift it up to the right once you’ve removed the screw.

The chopper itself and the chopper screen definitely needed some cleaning too.

After inspecting it, I kind of think the chopper blade could stand to be replaced, but we all know that I was not going to leave my dishwasher unassembled while waiting for a new part to ship.

(Hi, my name is Kristen, and I like everything to be put back together.   Now.)

Once the dishwasher was all cleaned out, it was fairly simple to put back together. 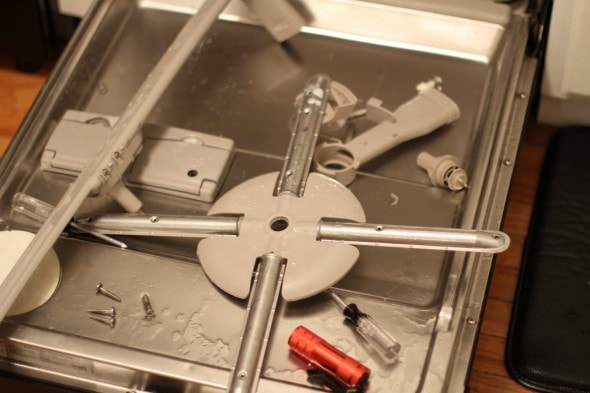 And I am pleased to say that the dreadful sound is gone now.

Plus, I think the chopper and the dishwasher in general will function better without all that unchopped stuff in the way.

I have to say, though, I really do not envy plumbers and appliance repairmen because working down on that level is super uncomfortable.

I think this project probably took me a little less than an hour, so I feel like it was worth it to save the $120 a service call would have cost.   Plus, there’s the convenience factor: my dishwasher was up and running in an hour, and I didn’t have to bother calling someone to schedule a repair appointment.

Also, since I’ve done this by myself now, next time the dishwasher needs to be cleaned out (Children live at my house.   It’s gonna need to be done again.), I think I could do it a lot faster.

P.S. I posted a photo of my taken-apart dishwasher on Instagram last night, and a reader responded with #nowhiskers, which cracked me up.   She’s referencing You Don’t Need Whiskers to do That, of course.   And though the person with whiskers in this house is normally perfectly capable of doing this job, it’s pretty handy to be able to do stuff myself when he’s not at home or is sick.

P.P.S. I wrote a post for eBay about some of our favorite toys to buy secondhand (Duplos top our list of faves!)

Thank you! My dishwasher was not getting the top rack of dishes clean. I remembered this post and I figured this was a job that did not need whiskers. I found bread ties and turkey bones clogging the grinder in addition to many popcorn kernels. Now it is working great. I told my girlfriend about it because she had similiar complaints. They were going to buy a new dishwasher the next day. Her husband cleaned theirs that night. They are delighted to not have to replace the dishwasher.

Yay! You guys are rockin' it!

Our dishwasher stopped draining last week :o( We tried cleaning out the drain trap to no avail. This happened about two years ago, and it cost us about $150 for the repairman to come out and show me what was wrong--the "air gap" was clogged up. The air gap is that little silver thingie with the vents on top of your sink near the faucet. It makes noise when your dishwasher drains. Bless the man, he showed me how to clean the air gap, too.

After two years I only vaguely remembered what he showed me, but after Google and YouTube I came across a video that showed me what to do, and Voila! It's working again.

I never, ever had a problem with the air gap through many years of owning dishwashers, but at least I know how to check it and clean it now. I'm going to try to make it part of my routine weekly deep kitchen clean.

Good for you! What kind of dishwasher do you have?

Also, I wanted you to know that I made your salted spatchcock chicken tonight with the gravy and it was so good! Thank you for the recipe, it will definitely go into regular rotation.

Yay! So glad yours turned out well.

We have a Kitchen Aid dishwasher with a stainless steel inside and a chopper. Not sure of the model, but we've had it for nearly 10 years, I believe.

Great job! And I do hope your ill ones recover quickly and you don't get sick :)

Me too. I feel so doomed! But I'm trying to be super careful in order to give myself the best chance possible to stay well.

The good thing is that at least I am not sick while everyone else is at their worst.