If I could start this post off with an emoji, it would be a sheepish one. 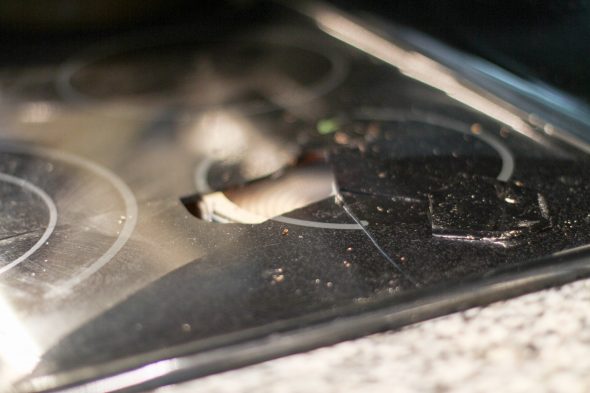 When I do dumb things like this, I often feel like I don’t want to blog about it, because…embarrassing!

(Remember when I melted my hot water kettle by putting it on the stove??) 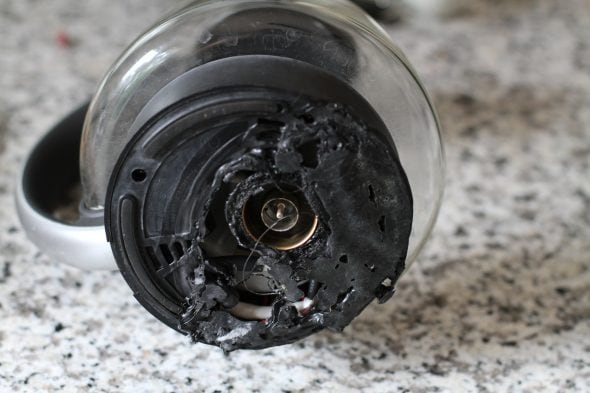 But I usually realize my hesitance is a pretty good sign that I should write about it.

While cooking dinner one night about a month ago, I took the lid off my skillet to set it down on the stove top. 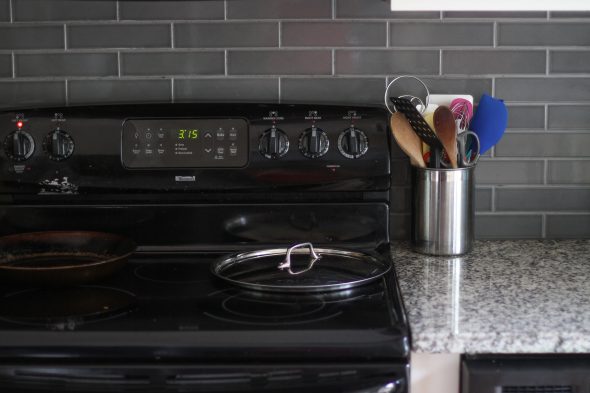 I stirred my noodles and then tried to pick the lid up.

Suction has some serious power!

I knew if I cooled the lid off a bit, the suction would break. So, I put a cool washcloth on the lid to gently bring the temperature down, and…nothing happened.

I knew putting, say, ice cubes onto the pot lid might warp hurt the lid, so I grabbed a little gel cooling pack, figuring that might be gentle. 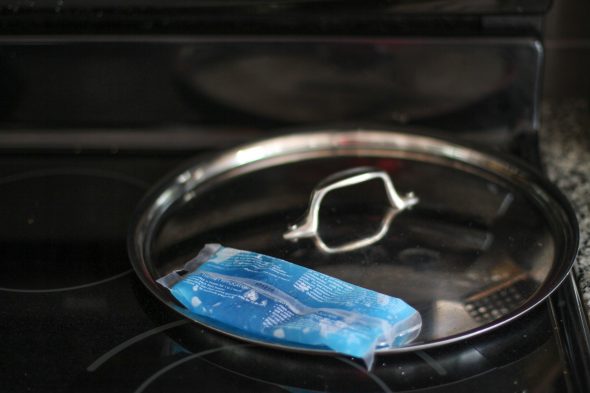 This is a recreation of the incident.

I barely had touched the pot lid with the gel pack and there was a tremendous POP.

I thought that I had surely ruined my lid, which would be a little sad because it’s All-Clad.

But, uh…I picked up the lid and found this underneath: 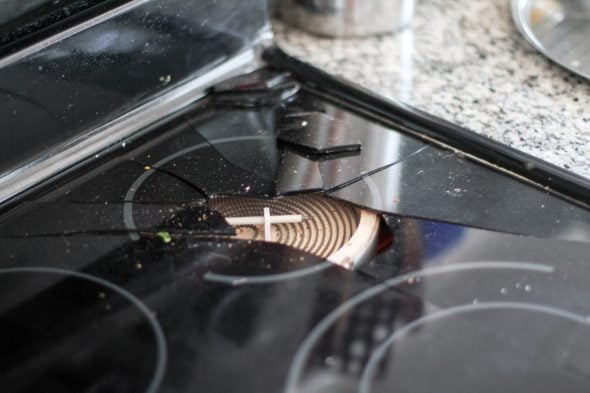 This is way worse than ruining a pan lid!

I have serious regrets about this life choice of mine. I should have just waited for the lid to cool down on its own. Where was my patience??

I seriously cannot believe I broke my stovetop. I think I said that probably 57 times that night, and here I am, still saying it. 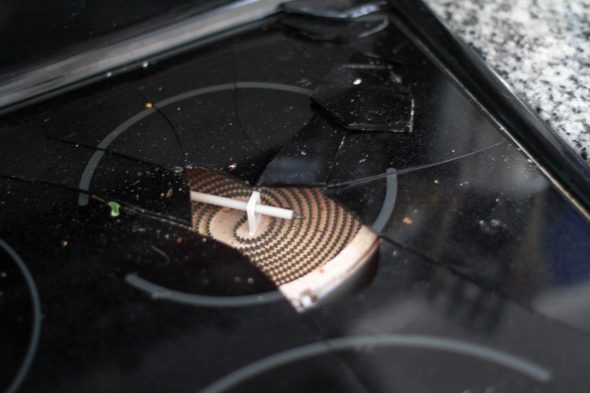 Multiple times that evening, I thought, “I should have just gotten takeout instead of cooking! There is no takeout as expensive as a stovetop!”

So, how much for a new stovetop?

I called my appliance guy to see how much he could get a stovetop for, and sadly, even his wholesale price for the glass top was $270, plus tax plus whatever he’d have charged to install it.

This Kenmore stove/oven is not an expensive one, since we bought it 14 years ago when money was super tight.

Basic was what we could manage. 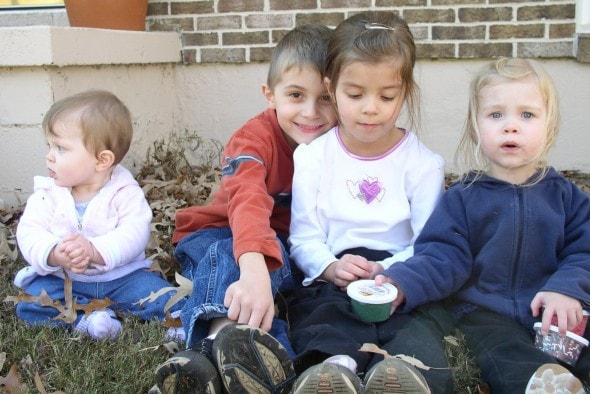 My crew around the time we bought the stove. It’s been a while!

Anyway, putting this much money into a fairly old/basic appliance wasn’t feeling super sensible to us.

Time for a new oven/stove

Mr. FG did a bunch of research (which he is much better at than me!) and landed on a stove that generally goes for about $1000 + sales tax.

However, he was able to find an appliance place somewhat near us that had the stainless steel/black color combo on clearance for $675 + taxes.

Unfortunately, stoves all over are on backorder right now (Factories are running slower? People are cooking at home and suddenly deciding to replace their stoves? Maybe a combo? I don’t know.)

We ordered the new appliance several weeks ago, and at the time, the guy said he hoped to have it in during the month of August.

How I’m cooking for now

Luckily, the really bad glass cracks are contained on the right side of the stove. Those two right burners are completely unusable, but the left two burners are still fine. 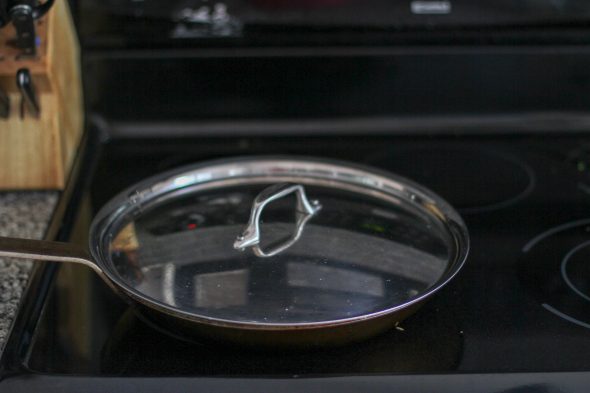 And since it’s not like I’m cooking for a big holiday party these days, losing half of my burners is no big deal. I’m trucking along just fine.

It also helps that the oven is unharmed, so I can keep baking any time I want. Whew.

I’ve just been keeping the All-Clad pan lid sitting on the broken parts so that we don’t accidentally cut ourselves.

Lalala, there’s nothing to see here!

And the lid also keeps me from having to look at the stove carnage every time I walk into the kitchen. I really don’t need to be reminded that often. 😉 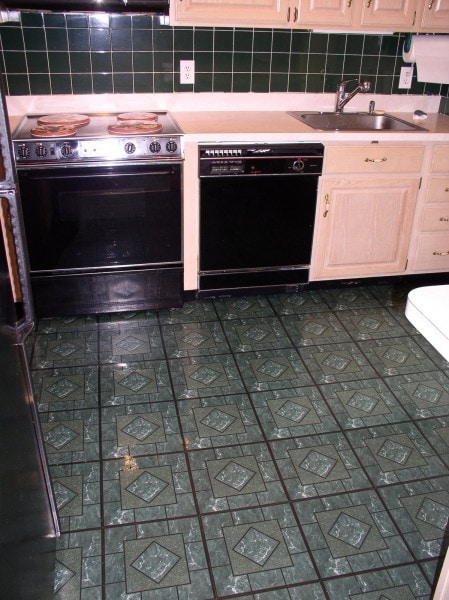 This was the original stove when we bought the house

Would it be less money out of pocket right now? For sure (a $330 difference).

But it doesn’t feel very smart to spend almost the purchase price of the appliance on a repair.

Now, if we were talking about my very old washing machine? I would pay for almost any repair on that because the newer washing machines just do not clean as well as my old machine. 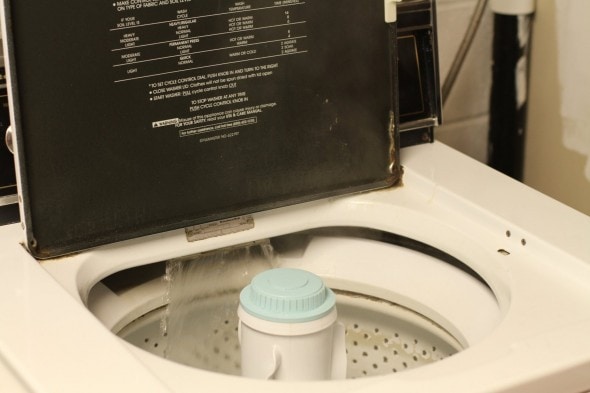 Stoves and ovens aren’t quite like that, though; this new one will work just as well (probably better!) than my old one, and this one has convection, which I have never had before.

Also relevant: we had the money for a new appliance in our home improvement budget. If we didn’t have money to pay for the new one, that would have tipped the scales in favor of repair.

That is the end of my embarrassing tale.

And I’ll be sure to show you my shiny new stove when it arrives!

Do you have an, “I can’t believe I broke this!” story too?

P.S. In the aftermath of my stove-breaking mistake, I employed at least  3/5 of the tips in this article about how to make yourself miserable after a money mistake.

(I wrote that post because I am a certified expert in this arena. 😉 )

I loved your post..I also just broke my glass stove top and like you debating whether or not it's worth spending almost $500 to repair the glass. My stove is two years old but I don't see spending that much money when a few hundred dollars more I can buy a new oven. I don't know how my glass broke. I just happened to notice a long crack the other day? I hate glass stove tops and really thinking I am going to opt for a gas stove depending on the cost to install a gas line etc....I feel like glass stove tops were the worst idea ever. I can never get it looking spotless no matter how hard I try...I am going to buy the $25 glass repair they sell on amazon and call it a day..Right now it seems like a waste to replace the glass or buy a whole new oven..Everything else works fine..I live alone so I can survive with one less burner anyways..

So much sympathy to you!

Let us know how the glass repair kit works out. Mine was too broken for that, obviously. I really went hard when I broke it. Ha.

Literally feel your pain! This JUST occurred in my household. What kind of repairman did you consider? Don't even know where to begin for finding a quote. Thanks!

I have a local guy that I call when I need appliance help; I'd read reviews for local appliance repair companies near you and call around to see if they can get a new stovetop for your model. If you give them the model number, they should be able to give you a price.

Much sympathy-this is a terrible feeling!

My parents gave me their brand new stainless steel Samsung stove. They moved and didn't need it and I had and old black stove that just barely worked. They literally just installed it a week ago. Well my husband and son decided to make burgers last night which I hate doing on the stove to begin with. I told them to turn the burners down because they were burning the burgers (he's trying to teach my son) and when they were done with one of the burners I turned it off and removed the pan and there was a major Crack. Multiple cracks on the burner and then one Crack that goes all the way to the left, all the way to the front and one all the way to the back. So now I'm wanting to repair when I have no money but I also can't buy a new one. I could not be more bummed about this knowing how new this is...

Well.. you might think it's going to make you feel better that other people did this, but when I read your article, I actually felt worse. LOL Mostly because my error not only ruined my stove top, but it burnt the enamel off the bottom of my favorite new recent purchase - a beautiful blue Dutch Oven! Like yours, my range is almost 14 years old. I guess I'm going to have to replace it, but it's going to have to wait until I get back from a trip, which means I have to warn the dogs that are not to use it. Mine is a very slight crack, but I seen in several places already that you should never ever use a broken glass cooktop! (Sorry, but they all had an exclamation point after that. LOL) Anyway, once I thought it through, it made sense that it is a serious electrocution Hazard because if you have something boil over and it goes into the crack, that would be a very dangerous combination. Electrical, heat, broken glass, water... not something I'm willing to risk. So looks like I'm gonna be without a cooktop for awhile. Major bummer!!

Oh man, that really stinks. I am so sorry that you have two ruined things instead of just one. Ugh.

I hope you can get yours replaced speedily after your trip!

I just noticed mine is cracked and I must have set something down on it too hard but I don't have any idea what - coffee pot is the most likely culprit, but I know I didn't slam it down or even intentionally put it down hard. $275 for the replacement, BUT they don't make it anymore. Hopefully I can find one somewhere even if it's used, but intact.

2 burners look fine, but it looks terrible and will probably get worse - and is potentially dangerous, but I've seen a number of anecdotes from saying it should be fine - I might wear safety goggles even for the good burners though.

I'll probably end up having to buy a new one - it made it 17 years before this with only a barely noticeable chip on the edge.

I can relate to your frustration.