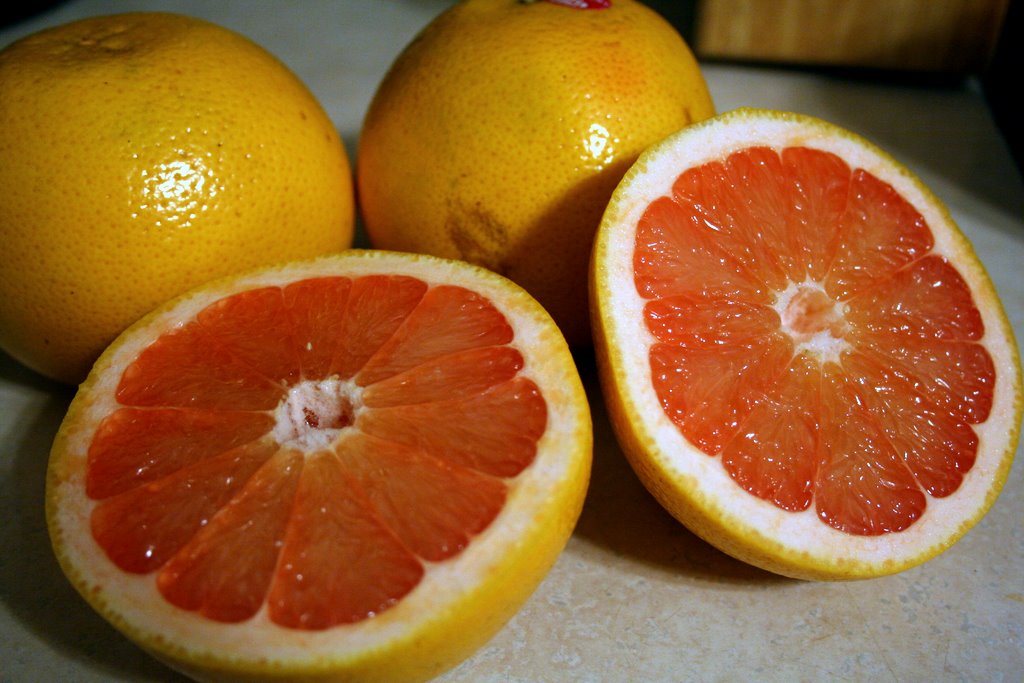 These lovely grapefruit specimens were a mere $.19 apiece. At my regular grocery store, they sell for $1.19 regularly, and for $.99 on sale. This price is prohibitively expensive when I’m buying produce for all six of us to eat, and so I buy grapefruit only rarely, and usually I don’t buy enough for all of us. At $.19, though, we all got to have a half with dinner.

I thought perhaps these would be not quite as good as the $.99 grapefruit, but they were juicy and very sweet. In fact, they were better than the more expensive ones.

I also got a one pound bag of cranberries for $1.19. I have yet to see the same thing for less than $2.50 anywhere else. The $.45/pound bananas are the cheapest I’ve found(except for at Costco), and same goes for the grape tomatoes and the red peppers. I used to buy red peppers at Costco, but I wasn’t a fan of having to buy 10 of them at a time(it was a lot of work to avoid wasting that many!). Now I can pay the same price and only buy two.

Oh, and how could I forget?? The big bag of Fresh Express spinach is only $1.33! I have never seen spinach that cheap before, not even on sale. We use this for salads(a post on that is coming tomorrow), and also in smoothies. I’ve been wanting to eat more spinach since it’s a very healthy food, so I’m thrilled to have found such a cheap place to buy it.

So, a big thank you to my friends Sophia and Laura for encouraging me to finally to go to Aldi’s…I’m so happy I did! And if you’re one of those people who hasn’t hauled themselves over to an Aldi’s yet(assuming you have one close by), consider yourself prodded by me. 😉

I love ALdi, it has cut our groery bill in half!

Lidl is a recent arrival in Johnstone, a rival to Aldi, from Germany. Their produce has more unpackaged options, eg apples, bananas, baking potatoes, tomatoes etc. Often cabbage/cauliflower is in open packaging, also in Aldi. I simply remove the item from the packet for the store to deal with.

One thing I dislike in Aldi is biodegradable packaging, which releases methane in landfill. Home compostable would be better. Polythene packaging can now be recycled so this is preferable.

The waste produced in all stores is the same. Using local traders, with home containers, gives Zero Waste.

How did you become so focussed on "Frugal"?

Oh yes...I wish that Aldi's had more unpackaged produce. A lot of it comes in shrink-wrapped plastic. Even the bananas are in a plastic bag.

As you point out, though, some of it is available in loose bins, like the grapefruit, so at least you're not entirely without options.

Then too, when shopping at a regular grocery store, most people put produce into those little plastic bags, so it's not as though Aldi's produces more waste...they're just not helping us produce less waste.

I think 2009 will be "Frugal" for many people. Aldi's ,Paisley, Scotland, has been my regular shopping venue for many years.

Following a Zero Waste trend however limits the choices to unpackaged fruit/veg. Pineapple and pink grapefruit are frequent purchases and the quality is always there.

Cost is not the first issue but food efficiency is needed for the trend. I admire your approach which will be a great help to people struggling with the credit crunch.

I just keep a quarter in my ash tray(which is empty, because I don't smoke). It's really not that hard!