You’ll be pleased to notice that the stuffed animals are back this week. A reader wondered last week if I buy these stuffed animals each week, and the answer to that is a resounding no! My kids have an embarrassment of stuffed animals, and I try to avoid adding to the collection whenever possible. 🙂

Earlier in the week, I stopped at Safeway to use a flour raincheck I had. I bought 7 bags of flour for $10.50, and I didn’t take any pictures of those bags. In fact, now that I think about it, they are still riding around in the trunk of my husband’s car. I don’t think I told him I bought flour while using his car, so he’ll be kind of surprised if he opens his trunk. 😉

This is our produce for the week. 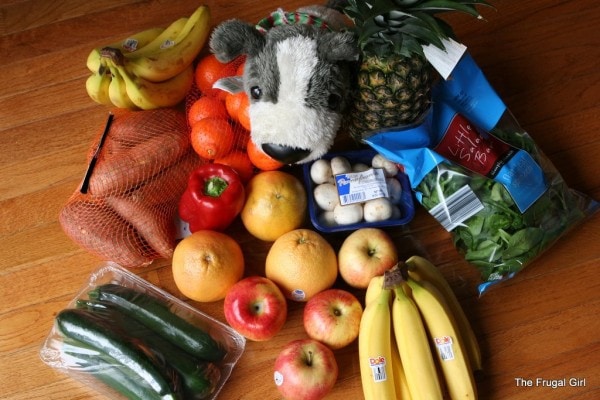 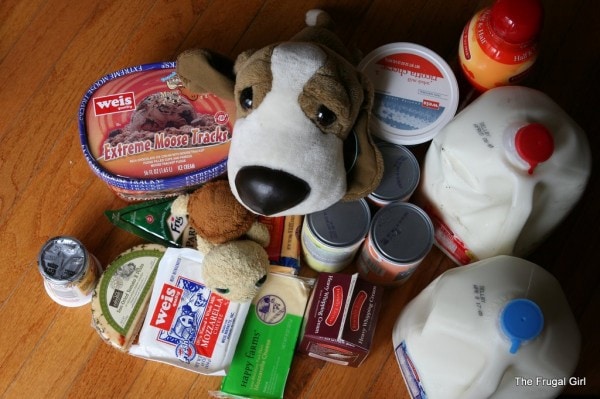 Our meat. The chicken is for future use (it was on sale) and so are the bratwurst (they were in the reduced bin, as they expire soon. No biggie to me, as they’ll go into the freezer). 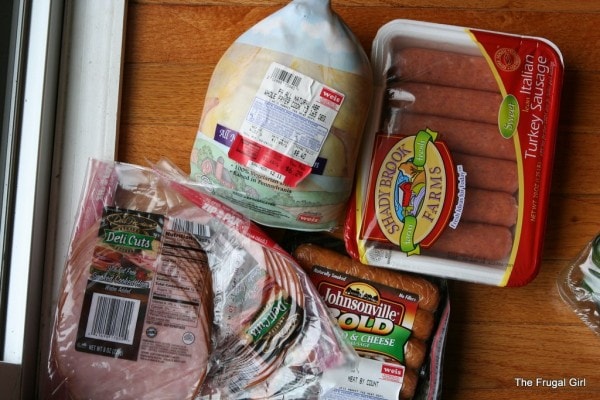 And here’s the pantry-stuff. There’s a pack of toilet paper beneath the tea and candy bars) and those three jars behind the peanut butter are 75% fruit jams from Aldi. They’re new and they’re really good! 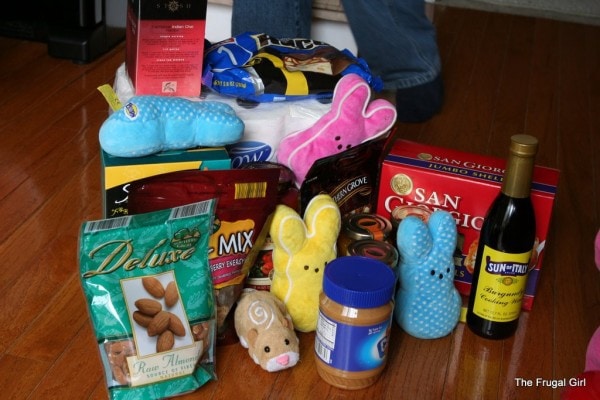 Last but not least, here’s my flour from Weis, along with the spider that started this whole stuffed animal tradition.. 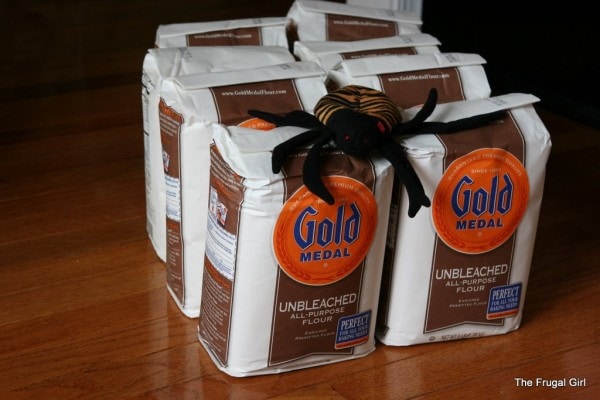 Breakfasts this week will be yogurt, bananas, muffins, toast, and oatmeal. Lunches will be homemade yogurt, yogurt smoothies, fruit, sandwiches, and leftovers as necessary.

Dinners are as follows:

Something I wrangle with all the time is the value I hold of buying local/organic/free trade food, which is, I feel, so much better for the planet and the people - versus the need to be frugal. How do other folks deal with this? I do garden, and I'm a vendor at farmer's markets in the summer, so I am blessed to be able to buy/be gifted with local and organic food for many months of the year.

I bought 15 pounds of flour this week! I was so excited to finally see flour on sale! I had planned on buying more, but I got the last three bags. If I had more freezer space, I would buy more, but I just have the space to store it all. I figure 3 bags should last a family of three a good while.

My pantry is getting echo-ey, so I'll be shopping tomorrow. Might have to check out the flour prices, although I still have a fair amount from when it was on sale last month.

Of course, I'll be buying eggs which will be a loss leader this week. Don't have any blog readers who've offered up their homegrown eggs . . . yet.

Katy Wolk-Stanley "Use it up, wear it out, make it do or do without."

Wow that's a lot of flour. I have been buying bread here since I arrived in Egypt because it's pretty cheap for local styles.... However I think I need to start making for health and to get better at making it.... It's a skill I will need when I get back to UK or USA.