I originally found this delicious recipe on Kelle Hampton’s blog, and I’ve made it multiple times over the past few years. 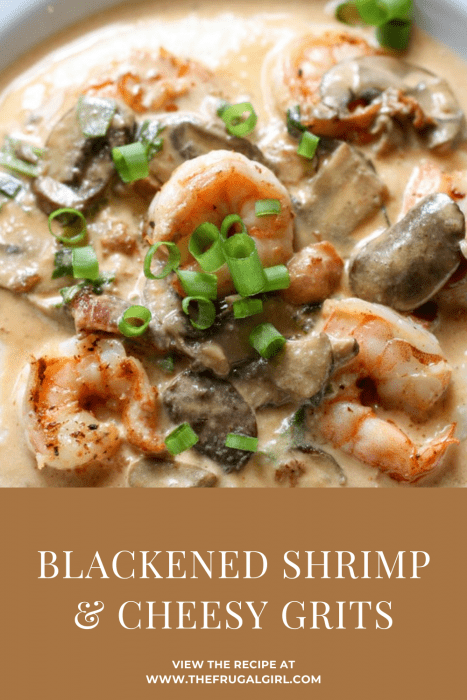 I’ve linked to it a few times in my menu plan, but since I don’t make it quite exactly like the original I always feel the need to add some parenthetical comments.

Also, the order of the instructions and ingredients always feels a little weird to me in the original; for some reason, the ingredients are not in the same order as they are called for in the directions.

So, I wanted to rewrite the recipe for myself, and I figured I could just put the recipe into a post so that I can link to it in future menu plans without having to do parentheticals.

Oh, and another reason I wanted to retype it: I really think the salt amounts in the original recipe are a typo.

I like salty food, but two tablespoons of kosher salt is a lot for a pot of grits that’s going to have cheese added as well.

I don’t have step by step photos or anything, but I do have a printable recipe for you, just the way I make it. 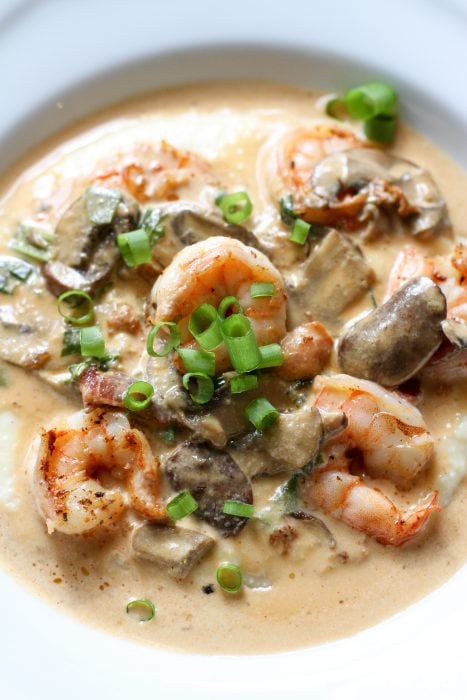 This is kind of a long recipe, I know!

You might feel a little overwhelmed when you scroll through it. There are quite a few ingredients, and a fair number of steps.

But this is largely because you’re sort of making two dishes at once: the grits, and then the shrimp/sauce.

Once you make the dish a few times, it will feel less complicated.

What type of shrimp should you use?

This recipe calls for raw shrimp, so I would not subtitute pre-cooked. The uncooked ones really taste better.

Usually raw shrimp has the shell on, but if you buy it from Costco, only the tail shell is on, and that makes the peeling job quicker.

So, if you want your life to be easier, get the shrimp from Costco!

Can you make shrimp and grits without dairy?

Yes, if you tweak a few things.

Sonia is sensitive to cheese and milk, but not to butter or cream. 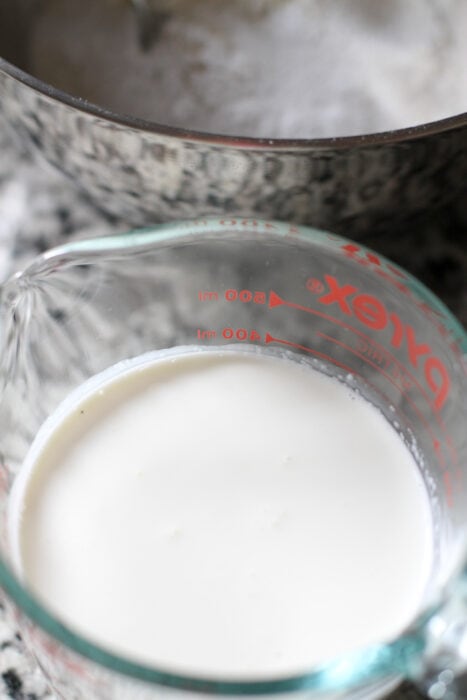 So, nothing in the sauce is problematic for her.

If you can’t do heavy cream, I’d just sub more chicken broth, and you’ll have a clear sauce vs. a creamy sauce. Or you could try a dairy-free milk in place of the cream.

The grits are problematic for her due to the milk and cheese, so I either:

This is a time when having a broken stovetop with only two burners is extremely problematic. Ha.

Those of you with no allergies will be able to make this dish with only two pans, though (a saucepan for the grits, and one skillet for the bacon, then the shrimp, then the sauce.)

Can you make this a little lighter?

This is not a low-calorie dish by any stretch of the imagination. (!)

Most of the people I’m feeding are not in a position of needing to limit calories, so I make the recipe as-is and I don’t worry about the calories.

If you are watching calories, though, you could leave out the cheese, sub something lighter for the heavy cream, and use less bacon.

How to reheat leftover grits

Grits get awfully firm after a night in the fridge, so I always stir in some milk (or water for Sonia) and then reheat them in the microwave or on the stove top. The additional liquid does wonders to help the grits return to their original creamy state.

The amount of liquid you need will vary depending on how many leftover grits you have. Start with a little liquid, and keep adding and stirring until the texture is the way you like it.

I tried to cover it all, but if you’ve got more questions after reading the recipe or giving it a try, leave a comment and I’ll do my best to answer.

Cook the shrimp and make the sauce while the grits are simmering for 35 minutes. That way, everything is done at the same time.

As an Amazon Associate and member of other affiliate programs, I earn from qualifying purchases.

Very delicious! I love to eat shrimp with rice and this really satisfies me. Your shrimp recipe was hit at my house!

This sounds amazing! I happen to have a bag of shrimp in the freezer, may have to give this one a shot next week (no grits in the pantry, might sub brown rice instead, that's more my speed).

If one is looking for a dairy-free sub for heavy cream (and doesn't have a nut allergy), homemade cashew milk is great - it thickens up when you cook it, and makes a really nice sauce for something like this.

Soak 1/2 c raw cashews overnight. Drain, then add about 1 to 1.5 cups of water and blend until smooth (any blender will work, though something very powerful like a Vitamix is best for homemade nutmilk, and will allow you to make this without soaking the nuts first).

I'm a shrimp and grits fan. I get them for my birthday every year from my mom, but had to skip this year because of Covid. I'm partial to a citrus based sauce and grits with cream cheese, but I like all varieties (we have a food truck here that serves them!) The only bad variety I've ever had was from an oyster bar that put buffalo seasoning on the shrimp. I'm still salty 8 years later.

This reminds me of an airplane meal I was served once. On a flight between Seoul, Korea, and Chicago, we were served shrimp over some kind of rice porridge for breakfast. It was terrible! My kids (ages 3, 5, 7, and 9) refused to eat it. I tried to eat it, but I don't like shrimp, and the rice porridge was watery and bland. It really wasn't what anyone wants to eat at the end of a 13 hour flight.

The rice porridge sounds like a version of congee - it's a pretty common breakfast dish in Asian cuisine, so not terribly surprising to find it as an airplane meal that time of day. It's pretty different than anything our American palates are used to, though, especially at breakfast! My Korean aunt likes hers plain topped with kimchi.

I don't blame you; that sounds gross! I even like shrimp, but I wouldn't want it for breakfast.

These grits are creamy, cheesy, and totally not watery. I think you'd like them way better. :)

LOVE grits. I made my vegetarian friend from the Netherlands a dinner of cheese grits and stewed okra, and he loved it. :) Can't go wrong!