Those of you who are experienced in the kitchen will read this post title and be like, “What? Why is this even a post?? Doesn’t everyone know how to whip cream??” 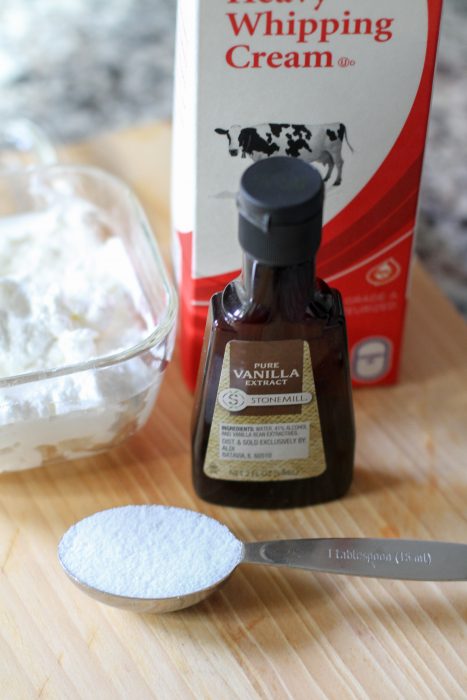 But if I have learned anything in my years of blogging, it is that any knowledge or skills I take for granted will be new to someone out there, and I can help someone by sharing a how-to.

For instance, I’ve come across a fair number of people who have no idea how to sew a button on.

Or people who are surprised that making your own frosting is actually super simple (butter, powdered sugar, vanilla, a little milk or cream! Here’s a recipe.)

And I know there are also people who have no idea how easy it is to make whipped cream.

If that’s you, well, read on, because this post is for you.

Second, I think it’s less expensive, as long as you can get vanilla at a reasonable price. 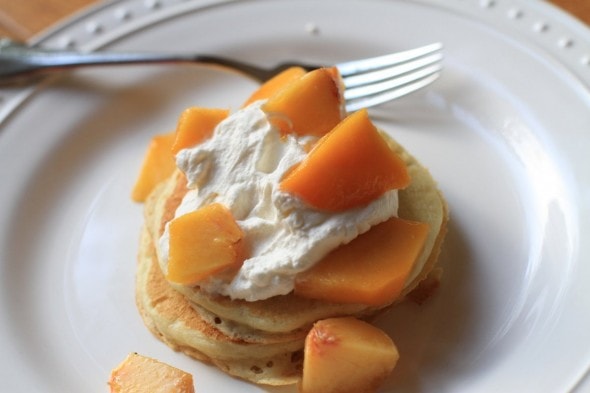 Thirdly, three ingredients seem way healthier to me than the ten or so ingredients you see listed on a can of whipped cream.

(Bonus reason: if you make homemade whipped cream, you get to lick the beater when you are done. Can’t do that with a spray can of whipped cream.)

You can make one-ingredient whipped cream (put heavy cream into a mixer and whip it up), but that’s not going to be at all reminiscent of what comes in the spray can. 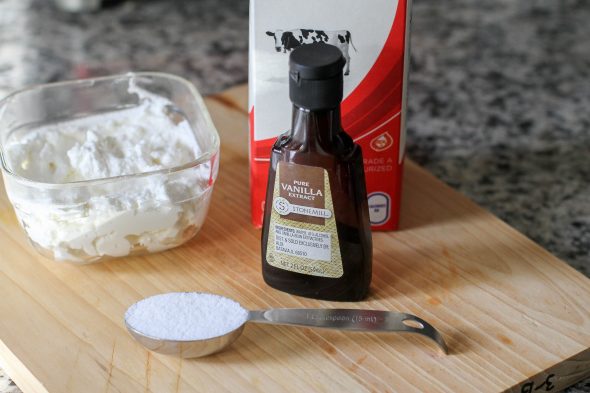 You need an electric mixer

“Need” is maybe not the right word. If you want a workout, you can whip cream by hand with a whisk.

But cream-whipping is going to be significantly easier if you’ve got an electric mixer.

I personally use my Kitchen-Aid stand mixer every time.

(This is the Kitchen-Aid model I have.)

You don’t need to do this, but if you put your mixer bowl and beater into the freezer for a few minutes before whipping the cream, it can help your cream whip up better, especially in the summer when your kitchen is warm.

Whip it just until it’s fluffy

If you beat it in the mixer for too long, the texture will get a little too stiff (vs. creamy), and if you leave it even longer, the milk solids will start to turn into butter. 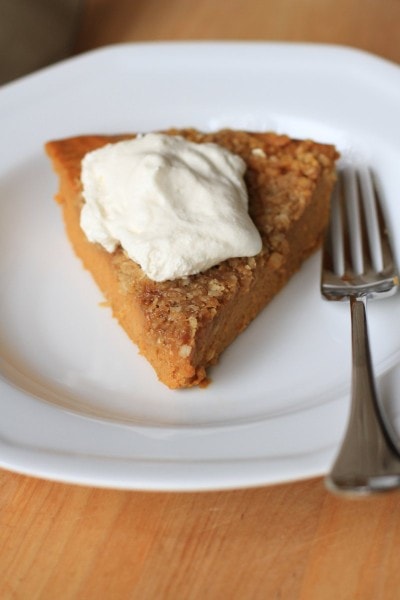 This is a super-easy crustless pumpkin pie

You have to seriously overdo the beating to get to the butter stage, though. I’ve tried making butter on purpose and it takes FOREVER in a stand mixer.

So. Don’t worry too much about accidentally making butter; just whip the cream until soft peaks form and it looks nice and fluffy.

Whipped cream is best right away, but you can store it

We usually eat whatever I make right away (I can be counted upon to lick the bowl every time), but I’ve stored whipped cream in a container in the fridge for a day or two. 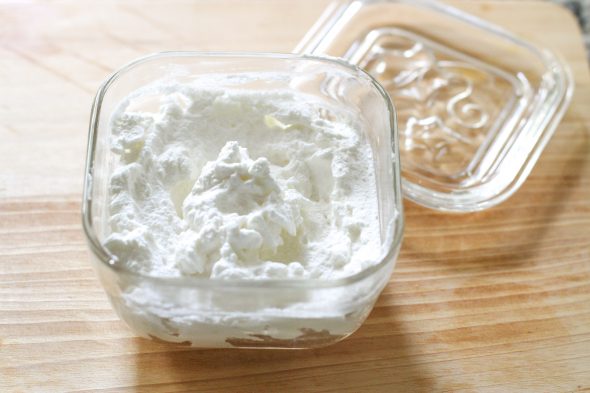 What can you use whipped cream for?

Well, I mean, you can just eat it with a spoon if you are a blogger named Kristen. 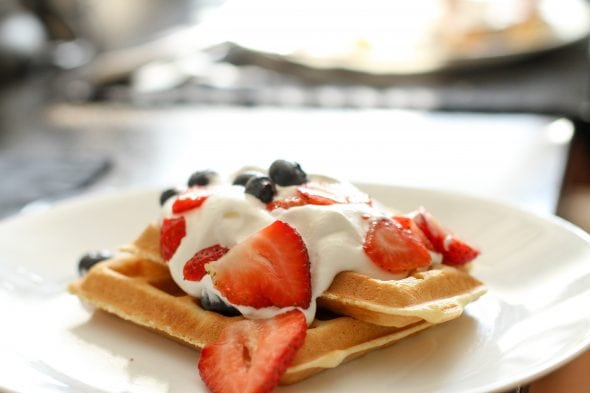 If you are a non-Kristen person, though, you can:

Anything you’ve been using Cool Whip or Reddi-Wip for can usually be done with homemade whipped cream.

And if you make yours differently than I do (or add flavor variations), I’d love to hear about it!

Scroll down for the recipe.

If your house is warm, it's helpful to chill the bowl and the beater before whipping the cream.

Love homemade whipped cream! I also use vanilla and a touch of sugar, however I will often choose my blendtec blender over my stand mixer to whip. It is so fast, usually a 30 second blitz!

You can also make whipped cream with an egg beater in just a minute or two. Much faster than a wisk, but don't need to get out the electric mixer!

Haven't read all the comments but I make my own whipped cream often and have found that 1TB of cornstarch helps it to "hold" much better. This makes it easier to make ahead! Happy Weekend!

I went to a friend's once for dinner and brought dessert, along with the ingredients for making whipped cream. She had no clue whatsoever that it could be homemade and was just tickled to death with the whole thing. No stand mixer? No problem. An electric hand mixer will work as will an immersion blender. I would venture to say that if anyone has an old hand-cranked rotary beater, that it would work too. So much better than anything you can buy in a can!

In between an electric mixer and a wisk is an egg beater! This will whip cream in a minute or two and is easier than getting out the electric mixer! See the link for an example - if you don't have one of these, try one - very handy item to have in your kitchen. I have my mothers-the one she used when I was a kid, I am 63 now so this thing has gotten A LOT of use and has lasted for more than 63 years! Very Frugal! https://www.acehardware.com/departments/home-and-decor/kitchen-utensils-and-gadgets/miscellaneous-kitchen-utensils-and-gadgets/62852?store=08546&gclid=Cj0KCQjw48OaBhDWARIsAMd966Cq6G4UruzdelzCJdLUt1gtlbSVBx7rhOvuLf4WBGWWo09-QiLb4BcaAngcEALw_wcB&gclsrc=aw.ds