Why I Make Homemade Yogurt 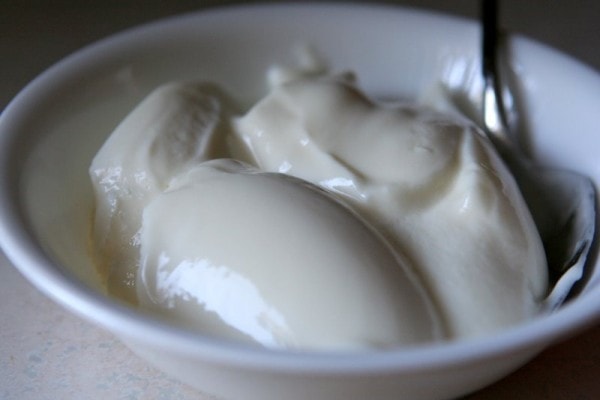 Homemade yogurt is a slightly unusual thing to make, and since yogurt is widely available, you might be wondering why in the world I bother. Here are a few reasons.

For starters, yogurt is a really inexpensive food to eat if it’s homemade. A quart of non-organic yogurt costs $2-$3 in my area, but I can make yogurt for $.50 a quart, which is a large savings. Four quarts of grocery store yogurt per week would cost me between $416 and $624 a year, and this yogurt(from milk purchased at $2/gallon) costs me a measly $52 a year.

You can even make yogurt from organic milk and save money. A $5 gallon of milk produces four quarts of yogurt, each of which costs only $1.25. Even if you pay $7 for a gallon of milk, a quart of yogurt made from that milk will only cost you $1.75.

If you usually buy individually packaged yogurts, making homemade yogurt will save you even more money.

In addition, homemade yogurt is environmentally friendly. The only trash (which should be recyclable) produced in this process comes from the original milk carton. The yogurt itself is made and stored in reusable Mason jars.

If you’d like to make some inexpensive, green, and healthy yogurt, check out my homemade yogurt recipe.

Monday Q&A-In which I ask questions of you!
← Previous
A Day In The Life Of The Frugal Girl (School Year Edition)
Next →
Click here to cancel reply.

Making yogurt in a quick cooker is the way to go. Mine has a pre-set program for jogurt....I add one gallon of milk, let it heat to the right temperature.....add a few spoonfuls of yogurt (stirred into a cup of the milk) from a previous batch....and let it sit .....yogurt is ready the next day. No stirring required. Since I like my jogurt thicker, I line a colander with a cotton cloth and let the whey drip out until the jogurt has the consistency I like. Done! I get a ton of yogurt without sugar and whatever else......

Love the information I found, I am a newby at making yogurt, but have purchased a yogurt maker and with all these comments, I feel I have a pretty good handle on how to begin. Thanks so very much. Will write back and tell my experiences. Love to save the money and be healthier at the same time, this is a 'no-brainer' for me..

How can we compare the amount of sugar in this your yogurt recipe to store bought? I usually have Chobani Greek Vanilla yogurt. I would use organic milk if I were to make my own.

Preach it! Folks are used to store-bought yogurt which is usually full of sugar and thickeners. I made my own yogurt when I was in college and again for a couple of years after I visited India and loved the fresh-made yogurt there (served in the earthen dish it was made in overnight). Now I have two adult sons at home who are eating a lot of yogurt-- it's time to start making it again! I haven't tried the cooler/water bath method, interesting. I usually make it in a big pot, heat the oven to 110 and then turn it off and put the pot in there.

:-( I just absentmindedly added my yogurt started to my milk right after heating it. is it possible to save????? I was thinking of letting it cool to the correct temperiture then adding more yogurt starter?? thoughts?

That would be my inclination...cool it down and add fresh starter. Let me know how it goes!