My fridge was getting super disorganized. Part of that was my fault, but part of it is also due to the fact that people other than me use the fridge these days.

(That was less true in the days when my house was filled with toddlers and preschoolers.) 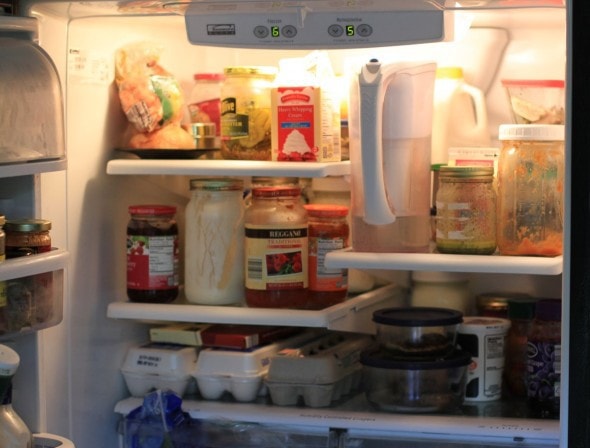 So, I organized it, and now I feel much better. I know what’s in there now, and as I often say, knowing what’s in the fridge is half the battle in avoiding food waste. 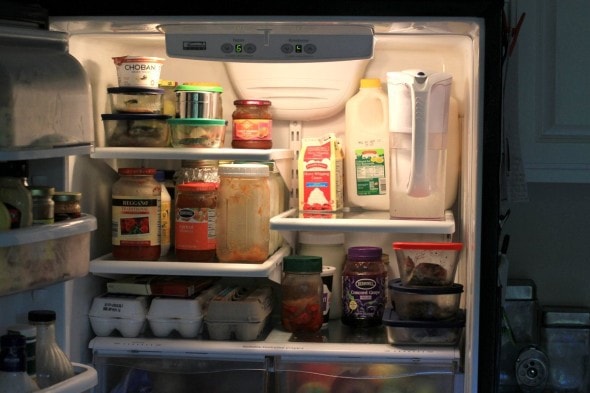 I’ve been doing bin composting for 5 years now, and I’m still sort of amazed at how produce peelings/cores/etc. lose tons of volume as they turn into dirt. Our fruit and vegetable scraps would fill up a crazy number of garbage bags, but they manage to be easily contained in a few composting bins. 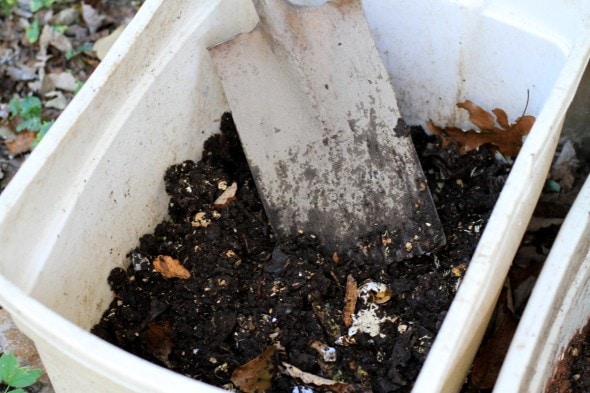 I don’t get a lot of delight out of the composting process (it’s way easier to throw stuff in a trash bag), but I do really, really love that something that would otherwise take space in a landfill is turning into something that benefits the soil.

This made me laugh so hard the other day, I just had to share it with you.

Sometimes, you just want to go deeper than the numbers and ask, “Why?” 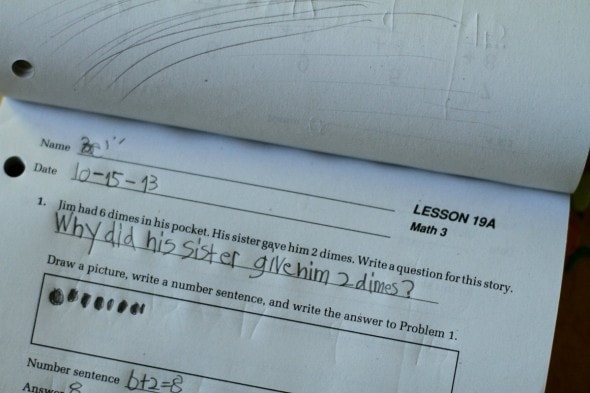 I might have bought another box of bruised apples. 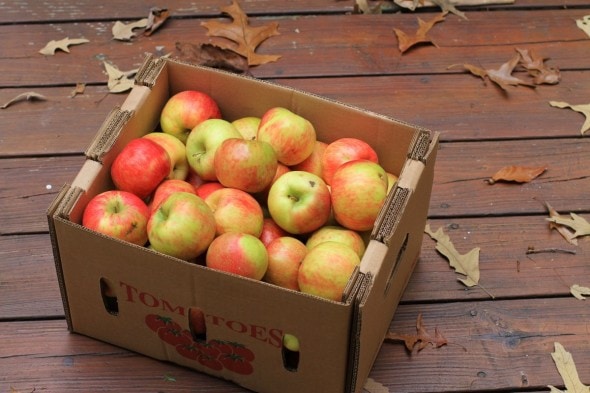 But I’m not making applesauce with these. We’re just eating them!

Speaking of bruised produce, I bought a marked-down cantaloupe and it was ridiculously good. 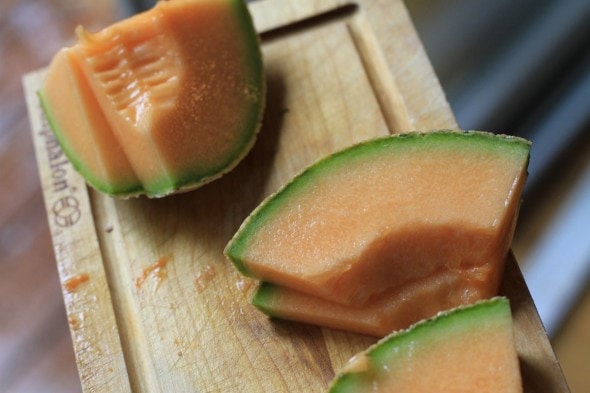 And then I bought a full-priced one and it was not so good. Not bad, but just kind of crunchy and not sweet.

So, I diced some of it up and hid it in a fruit salad and put some into a smoothie. I’m happy to report I wasted none of it. Yay!

Oh, I almost forgot to tell you! I got an email this morning saying that the $15 ebook bundle sale has been extended through today (Among other things, it includes my ebook, the book that inspired me to try some new hair-dos and the one where I got the lemon sugar cookie recipe.) 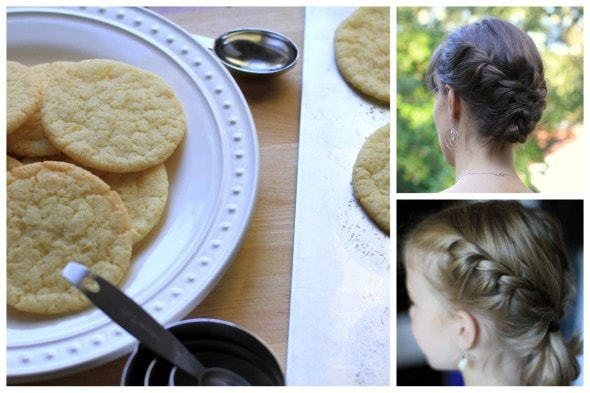 The sugar cookies are completely gone, by the way. Which is sad, because chewy cookies are one of my favorite things ever.

(I do have more lemons in the fridge, though. Hmmm.)

Anyway, you can click here to purchase the bundle in the next 24 hours.

And if you missed my post about everything that’s included in the bundle, you can read that right here.

Have a marvy-fab Monday, peoples!

(P.S. I’m an author of one of the books in this bundle, so I get a portion of the sale of each bundle purchased through my link. But please only buy the bundle if you can afford it and you feel like the books in it will serve you well.)

(P.P.S. That P.S. right there is exactly why I am not in a sales career. I’d probably starve. =P)

Don't you love it when you have just one tbls. left of something in a huge jar consuming space?! And yea, why DID his sister give him the dimes? lol Too cute! Now that is critical thinking! he he! :) And way to go on the apples! Yummy!

I was wavering back & forth on buying the bundle and was disappointed that I didn't get to it Saturday. Thanks for extending the offer (it felt like a sign), I just purchased it now. Can't wait to dive in!

P.S. Please do another post on composting! Did you just start out by putting banana peels, food scraps into an empty bin or was there some soil in it first? I've heard you need to add paper to it-or is that just for worms? What do you do with bones, meat & dairy? I should just jump into it and give it a try, but I'm so apprehensive about the smell attracting roaches, rodents, etc.

Cocomama - to avoid smells and excessive critters, I recommend using about as much paper/leaves/other dry stuff (i.e., browns) as you do food scraps/cut grass/other wet stuff (i.e., greens). You'll always have some bugs, worms, molds, fungi, etc., because those are what decompose your trash. The rule of thumb is simple: if the pile gets too smelly, add more browns; you can toss them on top, or mix them in (with a shovel or garden fork or whatever).

I also recommend not adding meat or bones to your pile. These take much longer to decompose and might attract varmints. Diary usually isn't an issue.

Finally, I recommend using a container without a bottom, and putting it on soil, but you don't have to add soil to your pile. I use a large rubbermaid bin (17 gal? 30 gal?) with the bottom cut out.

Hi! I really enjoy your blog. Zoe's math question is awesome! LOL! We love adding cantaloupe to our smoothies. It really makes them smoother, if that makes any sense! LOL! You can core & peel them, and cut them into bite size pieces and freeze in a large ziplock bag. We use frozen fruit to make smoothies instead of ice. I have never thawed any out to see what it would be like, but would probably be very mushy. We also do this with watermelon. Blessings!

I always get silly-excited when I see Chobani in someone's fridge. Their NY plant is about 5 minutes from where I grew up, and it's slowly reshaping that whole area-in a really awesome way.

*I have absolutely no connection to the company. I'm just glad to see a company move into the area that seems to actually care about New Berlin.

I've actually never bought any before, but I wanted to try some so I could compare homemade Greek yogurt to the real thing!

LOL! I love Zoe's comment. That's sort of my approach to math questions, as well. :)

Thanks so much for sharing your old composting post! We just moved and I've been trying to figure out a frugal composting solution. How many bins did you end up needing?