Well, I cleaned one of them. Most of the other ones are pretty well under control, as the things in them get rotated more quickly(one houses snacks, the other houses mostly cereal). The cabinet in question today though, holds things like canned goods, tea, dried fruit, nuts, and the like. I haven’t done a good cleanout of this cabinet in a really long time(as in, probably two years).

A good deal of the contents were not expired and in edible condition, but I did find some things that weren’t quite so fresh and which I need to deal with somehow. 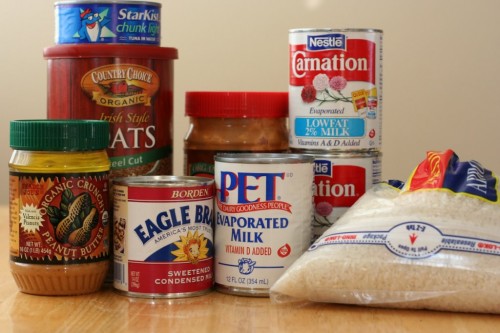 Starting from the right, we have half a bag of white rice. I hardly EVER use white rice(we use brown), so I’m not entirely sure what possessed me to buy such a large bag. Actually, now that I think about it, it was for a Cook’s Illustrated Arroz con Pollo recipe…they specified a certain brand, and it only came in a large bag. At any rate, I need to make a point of using this up. It’s not out of date yet, but it could easily get there, sitting forgotten in the back of my cabinet.

Then there are the three cans of evaporated milk. I think this was on sale, and I had grand plans to make fudge at Christmastime one year. Apparently this was several years ago, because the “best by” date is December 2007. I’m quite sure this is still safe to eat, although it’s not going to taste as fresh as it should. I used some today in the dough for our English Muffins. The dough is rising right now, so I’ll have to report later on how that worked out. If it gives the finished product a weird flavor, I’m just going to throw out the rest of the milk. There’s no point in wasting flour, sugar, yeast, and salt along with the milk!

The Eagle Brand should be easy enough to use up. I have a dessert recipe or two that calls for it as an ingredient, and I’m sure the chocolate and other dessert-y flavors will cover up any off taste the milk has developed.

I really have no idea how old the tuna is. I haven’t bought tuna in FOREVER. I’m still trying to decide if I want to give it a try or if I want to throw it away. What would you do?

Neither of the peanut butter jars have a date on them, so I don’t know if they’re expired or not. No one here is a big fan of natural peanut butter, and so they’ve just been sitting here, unused. I have a recipe or two that call for peanut butter, so I’m thinking of going that route with these jars.

And lastly, I have a container of steel-cut oats whose best-before date was August 31st, 2008. I bought these with grand intentions of serving hot bowls of them to my family in the mornings, but that never materialized. I have been very successful this month, though, in cooking oatmeal for breakfast, so I may actually give these a try. They’re not THAT far past their best-before date, so I’m guessing they’ll still taste ok. Any tips on cooking steel-cut oats are welcome, so comment away. I know you have to cook them a lot longer than you’d cook regular oatmeal(which I think is part of the reason I put off using them), but aside from that I’m pretty clueless.

So, there you have it. My goal is to use up all of this food in two weeks, and I’ll let you know how well I do.

I’m hoping that this kind of cupboard clean-out won’t be necessary in the future, now that I’m planning better and buying more responsibly. With the possible exception of the bag of rice, all of this food was purchased before I started on my no-waste mission. That’s encouraging, because it means that my new shopping habits are helping me to avoid unnecessary and redundant purchases and that my new cooking habits are helping me to actually use everything that I buy.

Far after the fact...

I would eat all those items, except maybe the PB since it's organic. For that I'd do some online research and maybe call the mfgr.

In addition to a hot pad, you could use the rice to make a draft dodger. Or to blind-bake a pie crust. I routinely ignore CI's specific brand recommendations unless they give a really good reason. They usually want something hard to get, or expensive, or hard to use in other recipes. 'Tisn't frugal!

[...] uber-short and boring, I should mention that I did make peanut butter cookies to use up the natural peanut butter that’s been sitting in my cupboard forever. I used a Cook’s Illustrated recipe, and it was delicious. So, no worries about me [...]

[...] any food this week, so instead of having a pictureless post, I thought I’d do an update on my cupboard cleaning from a week or two [...]

The oats you can grind or run through your food processor and use them in rolls or to replace bread crumbs in meatloaf/salmonloaf recipes. If you are comfortable using the tuna, you could probably make a tuna loaf.

I just put them in the pot I'm going to cook them in and leave them on top of the stove overnight. Its all ready to go in the morning.