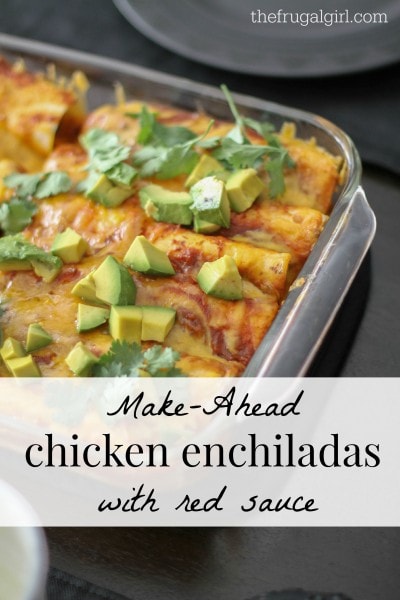 When I subscribed to the paper version of Cook’s Illustrated this year (I used some of my birthday money!), I got a bonus in the form of a free issue of Cook’s Country.

In that issue was a recipe for low-fat enchiladas, covered in a sauce made with chipotles in adobo sauce, and topped with avocados.

I don’t have a thing for low-fat recipes (given the crop of super slender youngsters in my house).

But I DO have sort of a thing for avocados.   And chipotles in adobo sauce.

So, I made the recipe.   And I ignored some of the low-fat recommendations. 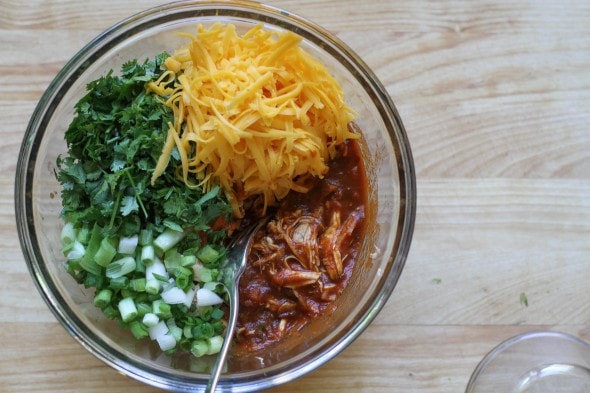 Anyhoo, they turned out be super delicious (high praise coming from me, since I normally prefer creamy enchiladas) and since they can be mostly made ahead of time, they’ve been coming in pretty handy on days when I’m busy around dinnertime.

A lot of enchilada recipes called for a can of pre-made sauce, but this homemade sauce is super simple and it doubles as a cooking liquid for the chicken (which simmers right in the sauce.)

A couple of notes:

So.   First you’re going to saute some onions in a 1/2 teaspoon salt and little oil.   A teaspoon seems stingy to me, so I use more than that. 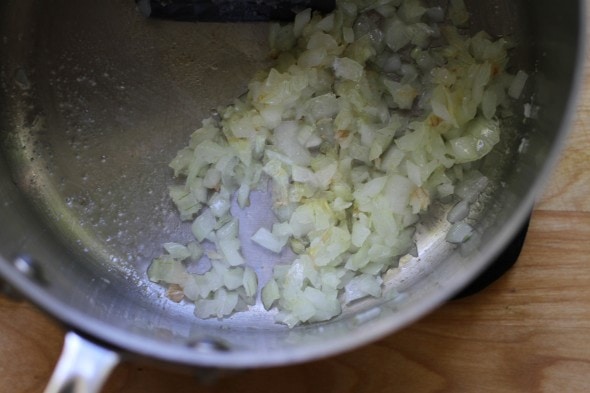 Next, you’re going to add a bowl full of deliciousness, aka garlic, cumin, chili powder, and chipotles in adobo sauce. 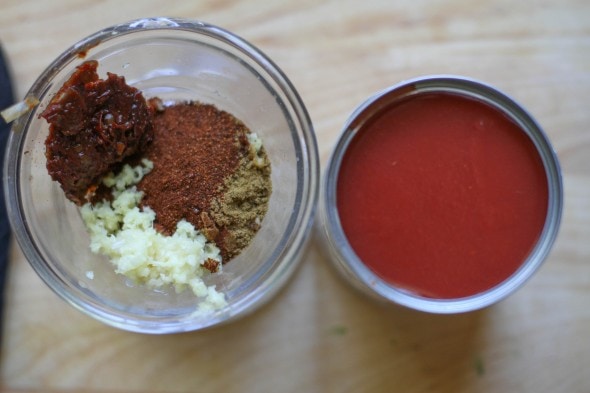 And after about 30 seconds, you’re going to stir in tomato sauce and water… 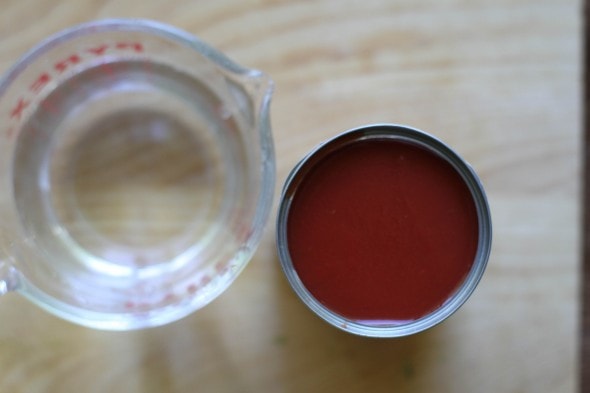 to make a sauce, which you’ll bring to a simmer. 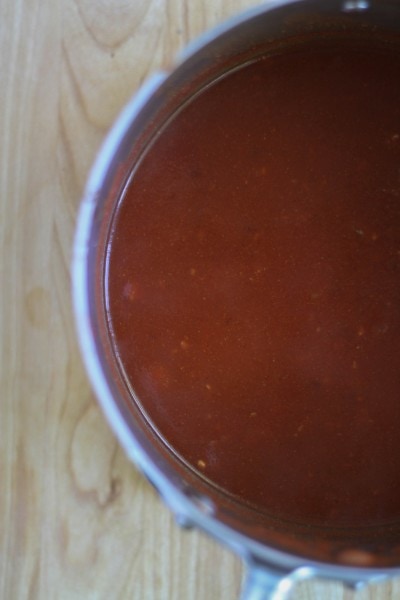 Next, you’ll need a pound of boneless, skinless chicken breasts. 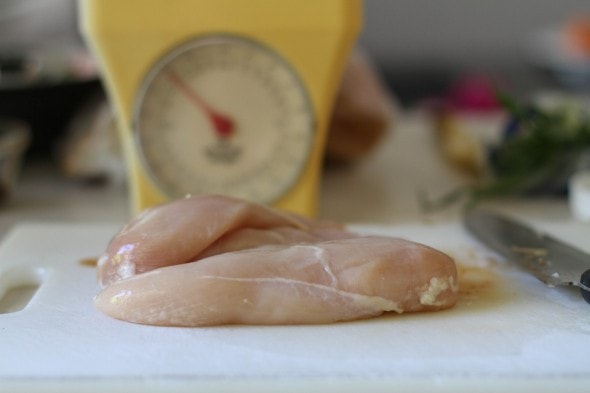 Add them to the sauce, and bring it back up to a simmer.   Continue to cook for about 10-15 minutes, or until the chicken registers 160 ° F.

Depending on the size of your chicken breasts, this could take more or less time, so use a thermometer to check!

Once the chicken is done, remove it from the sauce, let it cool a bit, and then shred it into bite sized pieces.

Combine the chicken, 1/2 cup of the sauce, plus cheese, cilantro, and onion to make the filling.   You’re supposed to use white onion, but I didn’t have enough when I last made these, so I used green onion.

Spread your tortillas out on the counter, and spoon 1/3 cup of the filling down the middle of each. 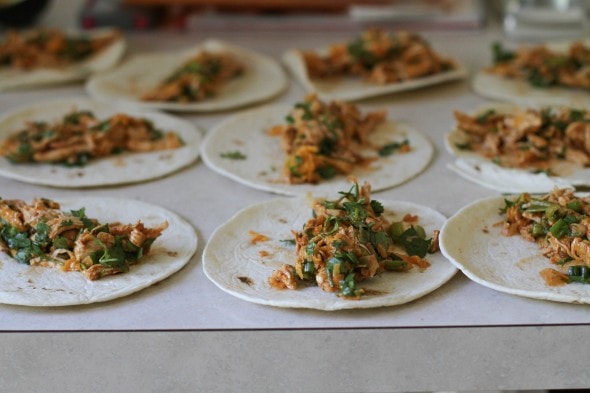 Spread 1/2 cup of the red sauce in a 9×13 inch pan.   Then roll up your tortillas tightly, and place ’em seam side down in the pan. 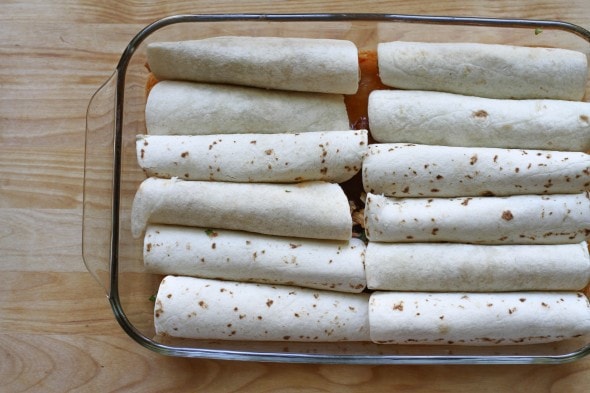 If you’re baking your enchiladas right away, go ahead and cover them with the rest of the sauce and sprinkle ’em with cheese.

Buuut, if you want to wait, put the sauce into a jar, hold off on the cheese, cover your bare-naked enchiladas with foil (or a lid), and refrigerate them until later.

When you’re ready to bake, pour the sauce over the enchiladas, and sprinkle cheese over top. 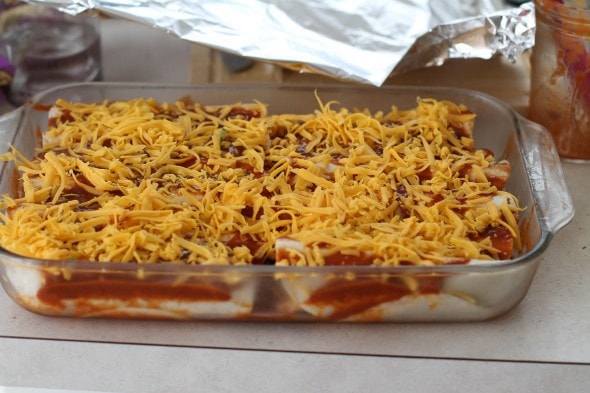 Cover them with foil, and bake in a preheated 350 ° oven for 20-25 minutes.   If your enchiladas were refrigerated, they’ll probably need a little more baking time.   Just keep them in the oven until they’re nice and hot.

Sprinkle cilantro and chopped avocado over the enchiladas and serve them with sour cream on the side. 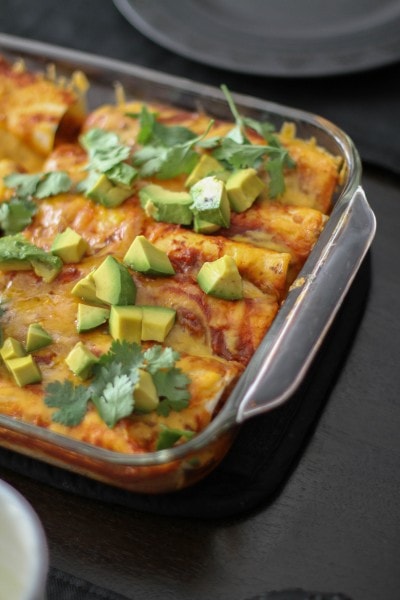 If you’re lucky enough to have some left over, they make quite a delicious lunch the next day.

I hope you love these as much as we do!

(By the way, I added this recipe to the handy-dandy main dish index.)

(My chicken took a little longer than 10-15 minutes, so test your chicken with a thermometer!)

Off the heat, transfer chicken to a plate, and let it cool.   Shred into small pieces.   Season sauce with salt and pepper to taste.

In a separate bowl, combine  1 cup  cheddar, plus the cilantro, shredded chicken, 1/2 cup sauce, and remaining 1/2 cup onion.   Season with salt and pepper to taste.

Spread 1/2 cup sauce in the bottom of a 9×13 inch baking pan.   If using corn tortillas, stack tortillas on a plate, cover with a damp towel, and microwave until soft. Flour tortillas shouldn’t need to be microwaved.

Lay tortillas on the counter, and spoon 1/3 cup chicken mixture across center of each tortilla.   Roll up tortillas tightly and arranged in dish, seam side down.

May I just say, Kristen, that I have made this recipe so many times over the past few years (including tonight) and it is definitely one of my favorite dishes of all time. It's just simply delicous.

Excellent. I am so glad to hear this!

It's so simple, but so delicious anyway. I really like mine topped with chipotle sour cream. :)

I know this thread is rather old now. But technically speaking......these are really small burritos. The manner in which they are made, is enchilada style which is some kind of filled tortilla topped with the enchilada sauce. In Mexican culture an authentic enchilada is made with corn tortilla. I understand that people possibly don't like the taste of corn, hence sub the recipe out using flour tortillas. I just wanted to opine about this recipe since this is my culture.

Have you ever made these with chicken that's already cooked and shredded? If so, how did you alter and how did it go?

I haven't, but I imagine you could make the sauce as directed, simmer it for 10 minutes, then add the shredded chicken and cook for a few minutes, just to flavor the chicken, and then you could proceed as usual.

Wow! My husband and I made these tonight and they were AMAZING! Thank you for the wonderful recipe.