Edit: I now use this granola recipe, which requires no stirring during baking. Way easier!

So, I’ve done two out of three things on my frugal to-do list. Amazing. I should make a list like that more often, apparently, seeing as I’ve now gotten two things done that I’ve been meaning to do for a year or two now. 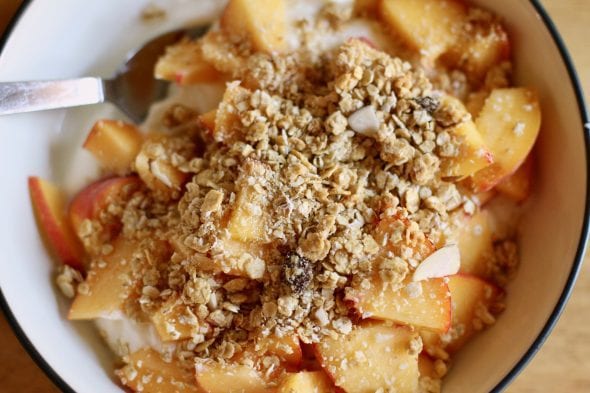 The granola was quite tasty…so far we’ve eaten it plain, as a cereal, and on top of yogurt, and it was good all three ways. I wouldn’t say that it’s terribly crunchy(despite the name)…at least, not as crunchy as a commercial granola, but it does form nice clumps, and isn’t as hard to chew as some granolas.

The recipe I used is available on the Taste of Home site (Crunchy Granola) but I’ll post it here with my modifications(because of course I can’t follow a recipe exactly, ever!)

(I left out the sesame seeds and sunflower kernels, and I used a combo of raisins and craisins. Also, I had no sliced almonds, so I chopped some whole ones.).

1)In a small saucepan, combine honey, oil and brown sugar; cook and stir over medium heat until the sugar dissolves. Remove from the heat; add vanilla.

2)In a large bowl, combine the next five ingredients.(note: This does not include the raisins. A scatterbrained cook,who shall remain unnamed, accidentally added the raisins at this point, noticed this in step three, and had to pick them out of the sticky honey/oatmeal mixture.)

4)Cool, stirring occasionally. I’d edit this to say that perhaps it should be stirred regularly while cooling. I

gave mine a half hearted stir and then left the kitchen to do something else. When I came back, the honey mixture had turned into a substance which held the granola to the baking sheet with a Krazy-glue like tenacity. Witness the vertically-held cookie sheet that is depositing no granola on the floor. With a little perseverance, I did manage to chip it all off of the two baking sheets, but it was no small task. I’m not positive that my lack of stirring was the problem…it could also have been the ungreased cookie sheets(which the recipe did specify). When I make this again, I’ll do some troubleshooting and let you know what worked.

I have neglected making my favorite breakfast (and dessert) dish--Granola/Yogurt/Fruit Parfait. But now that spring seems to have arrived (at least for a couple of days), I went to the store to collect the ingredients. It is expensive but spread out over several days not as expensive as buying premade. My problem is the yogurt, since they took my favorite brand of vanilla off the market. But I am going to try to make it with your recipe along with the granola. Then that will be more natural and I will just need to buy whatever fruit I desire for the week. Thank you for showing what you make and the recipes.

I've been using Alton Brown's granola recipe and really like it. The original recipe calls for 1/2 c vegetable oil, 1/4 c + brown sugar and 1/4 cup maple syrup. I use just 1/4 c of the brown sugar (not the extra tablespoon(s)). I also double the oats and leave out the coconut. This cuts fat and sugar per serving, but even with doubling the oats and leaving the rest of the ingredients the same, I still get good stuff in every bite. My favorite combo is pecans, sunflower seeds and dried cherries, but cranberries, walnuts, almonds are all good. The important part is the slow browning. I have found I prefer the maple syrup flavor to honey and I also like a non-clumpy granola (with the extra oats, there isn't enough liquid in the recipe for clumps). I don't grease my cookie sheet or use parchment and I haven't had a problem with sticking. Good Luck!

I use cooking spray on a Pyrex baking dish, and the granola comes off like a dream. When I forget the cooking spray, I have some sticking problems.

The Frugal Girl » Just a note on the calorie count of the granola recipe I posted!

[...] observant commenter noted that Taste of Home says that a half cup of this granola has 1148 calories, and asked if I had a lower calorie version.  Something didn’t seem right [...]