So, I promised to show you how to make chicken broth that does not resemble dirty dishwater, either in appearance or flavor. 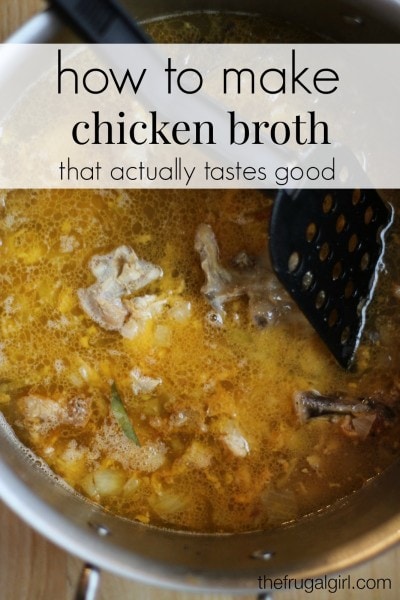 Though this recipe doesn’t come directly from Cook’s Illustrated (What the what???), the method is kind of a riff on their chicken noodle soup recipe.

(Because, um, pretty much everything I do in the kitchen relates back to CI/ATK somehow.)

CI’s method for making chicken soup broth involves hacking up an entire chicken, browning it, and then making broth.   After making the soup several times and enjoying the super delicious broth, I started to realize that I could do something similar when making broth from leftover chicken bones.

The key, I think, is having some raw chicken to start out with.   So, when I spatchcock a chicken, I always save the backbone (and any extra skin/fat I trim off the chicken). 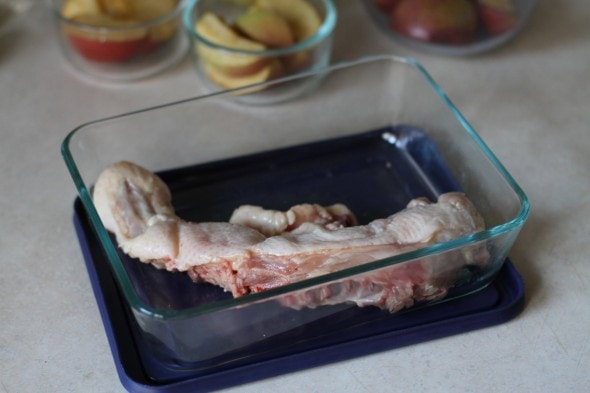 Also, when I make Teriyaki Chicken, I end up with some uncooked skin/fat/bones because the recipe calls for deboning raw chicken thighs.   If you don’t have any leftover chicken, I would grab one or two raw chicken thighs from the freezer.

By the way, this will totally work with turkey bones/skin, so save any raw bits from your turkey at Thanksgiving!

Here is what is important to know about broth making:

If you want delicious broth, do not just plunk bones into a pot with water and simmer them to death.

This is easy and hands-off and will produce nutritious chicken broth, but the broth will not knock your socks off either in appearance or flavor.

If you do a little prep work before your dump water into your pot, though, your broth will be exponentially improved.

So, first I heat my Dutch oven over medium heat and then add the backbone and chicken skin to the pot.   I let the fat render until the chicken skin is pretty crispy and the pot bottom is full of browned bits. 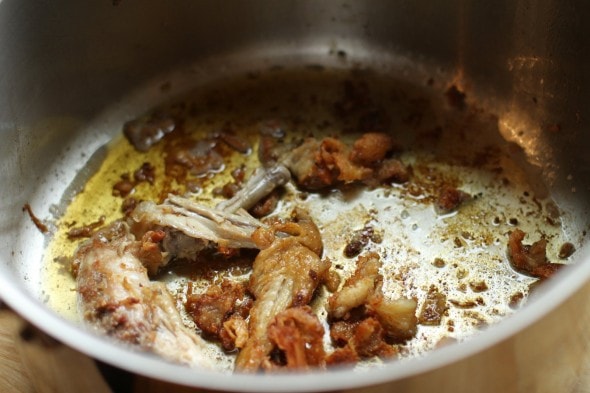 If there is one thing Cook’s Illustrated has taught me, it is this: Brown All Of The Things.

And whenever I apply that principle, my food is indeed more flavorful.

Ok, so, once I have the lovely browned bits, I take out the bones and such, and add about a cup of chopped onion.   I saute that in the chicken fat and browned bits until the onions are fairly soft.

Since chicken fat is very chicken-y-tasting, this will give your broth a good flavorful start. 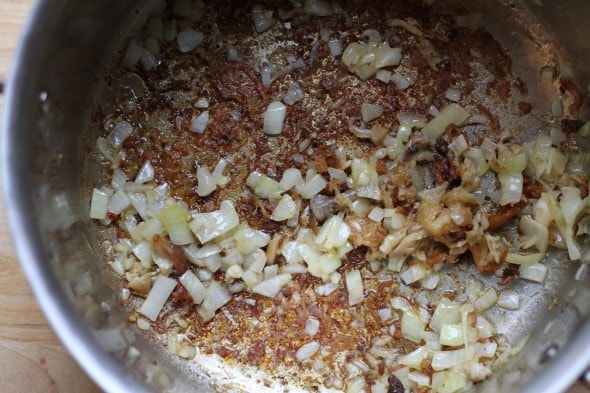 Then, and only then do I add water and the chicken bones.   I also sometimes add in thyme and/or bay leaves, depending on what I plan to use the broth for.   And I add a few teaspoons of salt as well.

Heat the water to a simmer, scraping the bottom of the pot to release the browned bits, or fond. 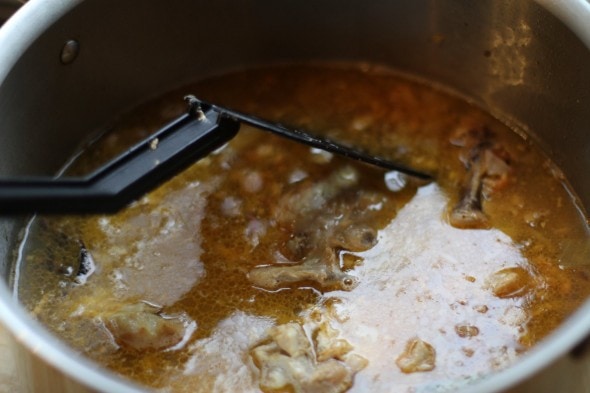 Because of all the browning you did before adding the water, your broth will have a lovely, appealing tint and flavor even before you’ve simmered it.

But simmer you should because your broth will extract flavor and nutrition from the chicken bones as it cooks.   If you let your stock boil, it’ll be cloudier than if you keep it to a simmer.   But the world will not come to an end if you boil it, so don’t stress, k?

After an hour, the broth will be quite delicious, but if I have more time, I let it cook longer.   If you let it cook for many hours, you’ll probably need to replenish the water, or you’ll end up with very concentrated stock (which is fine if that’s what you’re going for!)

For one chicken’s worth of bones, I’d say I probably end up with about 4 quarts of stock, although I don’t really do a whole lot of measuring as chicken broth is more method then recipe. 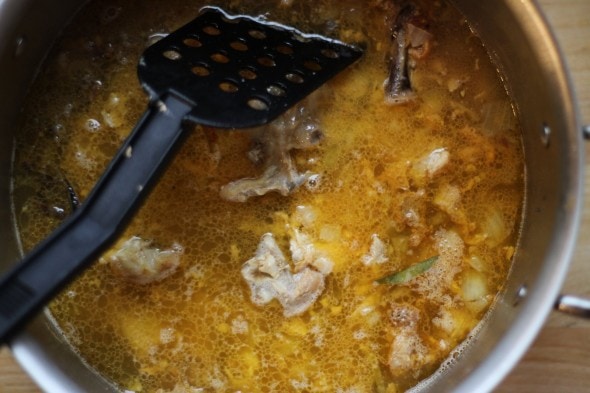 Once the broth is finished, strain it through a fine mesh strainer and let it cool.   Once it’s down to room temperature, you can refrigerate it.

As it cools, the fat will rise to the top and solidify.   For most purposes, you’ll want to spoon off the fat and discard it, because leaving it there will make your recipes unpleasantly greasy.

However, if you want to use the broth to make chicken noodle soup (I plan to post that on Wednesday this week), save a few tablespoons of the fat, because you can use it for sauteeing the veggies. 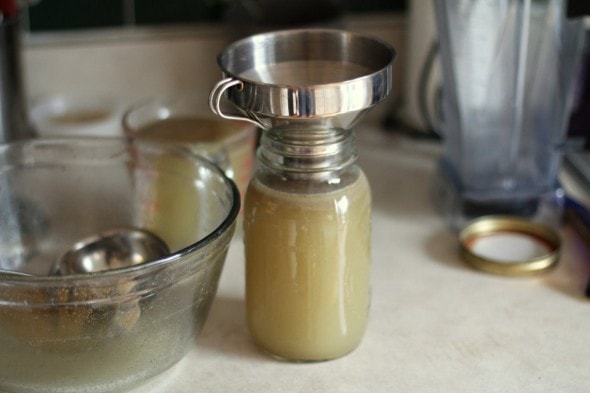 (This is an old picture of broth, from before I figured out the browning method. And clearly I boiled this stock because, hello, cloudiness!)

If you’re not going to use your broth right away, you can freeze it for future use.   And you can do this in regular glass Mason jars as long as you leave sufficient room for the broth to expand as it freezes.

Give this a try!   If you’ve had trouble producing tasty broth before, I really, really think this method will help change that.

P.S. If you want still more flavor, I’ve read that browning the bones in the oven before making broth helps increase flavor.   But I’m pretty happy with my broth at this point, so I’m loathe to add another step.

Reading this post AFTER the “sandwich fail” one, I have to laugh about how important it is for you to “brown all the things”!

how much room do i need to leave in the mason jar when freezing it ?

Sounds delish.. how much water do you add to the pot of bones ?

I do not usually measure this; I just add water to keep the bones covered.

Thank you for this tutorial. I recently found that the turkey carcass from the church community Thanksgiving meal had been sitting in the church freezer all this time. They were glad to be rid of it and I was happy to make it into 12 pints of broth, which I canned. Do you have a pressure canner? Its another step but canning means the broth is shelf stable. My freezer is pretty small so I look for alternative storage solutions whenever possible.

I do not, but I do have a pretty big chest freezer. So, I just put all of my broth into the freezer. I'd definitely do more canning if I didn't have a freezer.

And yes, what a boon to have a free turkey carcass! Those take up so much room in the freezer, so I can imagine that they were delighted to let you take it home.

Excellent and simple recipe! I definitely appreciate a method that utilizes chicken and an onion, such a great way to use a leftover rotisserie chicken. Definitely keep the fat on top until ready to use, it keeps an airtight seal that preserves the broth for much longer. I also browned the bones in the pan with some success, but will try it in the oven next time.