Today, it’s been 14 years since I first hit “publish” on a Frugal Girl post. 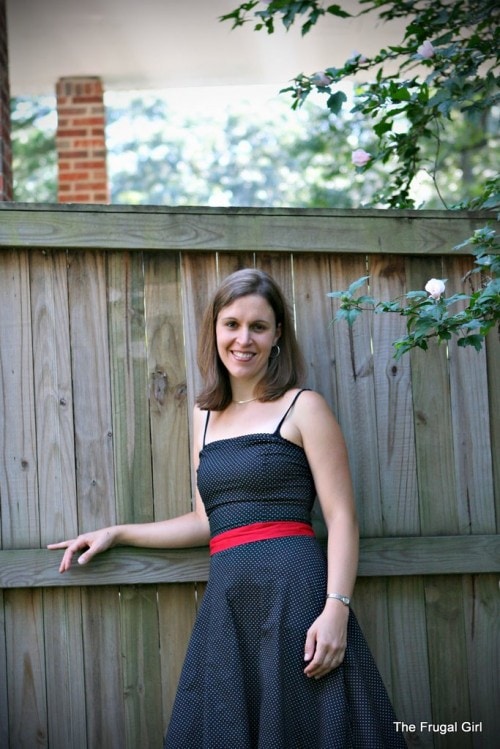 Me about a year into blogging, in a Goodwill dress.

In case you were interested, I started out my blog by sharing a photo of a skirt I made by refashioning some pants.

I didn’t start blogging with much of a plan or vision, but I am so thankful that my 2008 self gave it a try. I have felt thankful every year, but I am especially thankful this year for the income I get from my blog. 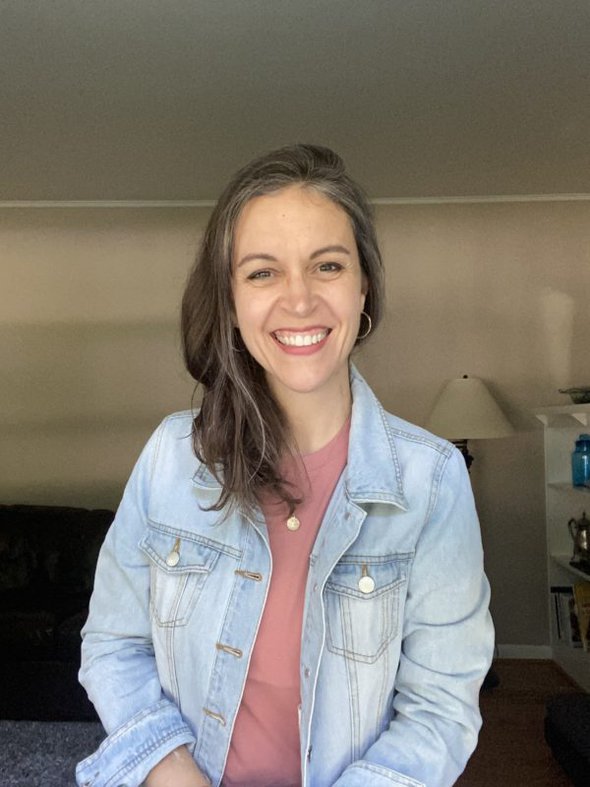 Me with 14 years of blogging under my belt 😉

In honor of 14 years of blogging, I’m sharing 14 observations from my years of writing here.

And as is usual for me when I make lists…these things are in no particular order other than the order they occurred to me!

I have never been the flashiest, most cutting-edge writer in the blogosphere, but I would feel comfortable accepting a gold medal in the Consistency category. I’ve been churning out 4-5 posts a week here for 14 years, so that’s almost 4,000 posts (this one will be 3,891).

A lot has changed on the internet (and in the blogosphere!) since 2008, but I have consistently kept trucking along, which matches my personality quite precisely.

I am a steady plodder and consistency is my superpower.

I didn’t start blogging with grandiose plans or expectations, which I think was a gift to me. I was so excited when I got 20 hits a day, or when I earned $15 in a month!

My low expectations helped me to avoid burnout and discouragement in those first slow years.

The internet can be a rather spicy place, and sometimes, it’s not a site owner’s fault when the commenting section becomes a miserable place to be.

I have been repeatedly amazed to see that when I respond to a spicy person with a kind tone and genuine care, they will often soften. And sometimes this has happened with people I least expect.

(This is probably a good thing to remember when I enter my nursing career because I am sure I will encounter spicy patients sometimes. 😉 )

A gentle response doesn’t always calm someone down, of course, but it’s way more likely to have that effect than an angry response will.

4. Care for others comes back around

Obviously, back in 2008, I had no idea of the turns my life would take, so I didn’t build this community with the idea that it would support me when my life hit the skids.

I just wanted to help people!

But I have been so grateful to be on the receiving end of help from you all this year, in the form of prayers, love, and encouragement.

I didn’t have the faintest clue what I was doing when I started blogging. But I learned as I went, and I think that’s sometimes the best way to go.

I talk to so many people who think they need to have their ducks all in a row before they launch some sort of content creation channel, and I think that’s a mistake. One of the best ways to learn is by doing.

6. Repeated practice is so valuable

I know I’ve gotten better at writing blog posts in the last 14 years, and it’s largely because I have been typing, typing, typing all these years.

7. I prefer to not be in an echo chamber

The internet has become extremely polarized in recent years, and sometimes I observe content creators purposely creating echo chambers for themselves.

They say things like, “If you haven’t gotten vaccinated, just unfollow me now.” or they might say, “If you’re one of those sheeple who got the shot, go ahead and see yourself out.”

How will you make a difference in the world if your audience already thinks exactly as you do?

8. You can be friends without agreeing on everything

Something I love about the community here is that we are not all the same. We represent a variety of lifestyles, religious beliefs, political persuasions, socio-economic statuses, family situations, and more, so I am positive we do not all see every issue the same.

And yet, we are all able to co-exist here, and I love that!

9. People like to be inspired, not told what to do

Since I write in a very personal way, I am almost always just sharing what has worked (or not worked!) for me, and people seem to like that.

There’s something about human nature that resists being told what to do, and maybe that’s why a “This is what helps me.” approach works better.

10. You can bless people even if you don’t have noteworthy gifts and talents

I feel like my posts here are very…regular. And I mean that in the sense that I’m not doing anything here that has the possibility of going viral. There’s nothing flashy or newsworthy.

For instance, I think one of my gifts/skills is the ability to be cheerful and content. That is not something people tend to look at as noteworthy, but so many readers have told me that the cheerful vibes here have helped them get through hard times in their lives.

11. I am going to struggle to spell double-letter words until I am dead

I am a top-tier speller in many ways, but when I do make an error*, 99.99% of the time it’s a word with multiple double letters in it.

For instance, I initially typed, “occurred” wrong at the top of this post. I don’t know why my brain cannot seem to get this type of word right, but I think if I am still making these errors 4000 posts into my blog, it’s probably hopeless. 😉

There are parts that suck, like having to deal with taxes/legal stuff/tech stuff.

But the actual work of blogging, like creating content and responding to comments, is fun for me!

13. It’s hard for me to imagine a blog-less life

I’ve been blogging so much, for so long, it’s hard for me to even remember what it was like to be blog-less.

There are a lot of unknowns in my future right now, but I can’t really imagine a no-blog future. As long as blogs are still a thing, I will probably still be typing away over here.

14. I appreciate YOU so much

What would a blog be without readers? The community here is such a delight; FG readers are simply the best on the internet.

Thank you for being here. 🙂

It's been a pleasure to be able to read your articles for me. Happy for you. You have a great blog.

Kristen, you are amazing!! I have been reading your blog since the beginning and you have helped me through so much and taught me tons!

Thank you for being you!

Being consistent and content are definitely your super powers! :) And I will forever call my difficult patients 'spicy' now, thank you!

I think I’ve been reading for 12 or so of those years. I remember finding you as a stay at home mom to two kids under 4, and needing to be very frugal with our one income. I consistently read you and Soule Mama (who no longer blogs, really) and you have been so helpful in my journey as a stay at home mom, and now a part time working mom. AND I also went back to school three years ago and am steady plodding along with that as well. Thanks for still being here!

Thank you for blogging all these years! Here's what keeps me reading your blogs: 1. Do-able frugal, 2. "this is what helps me" approach, 3. cheerful and content, 4. tone of kindness. Keep on keeping on! I love reading your blog posts.