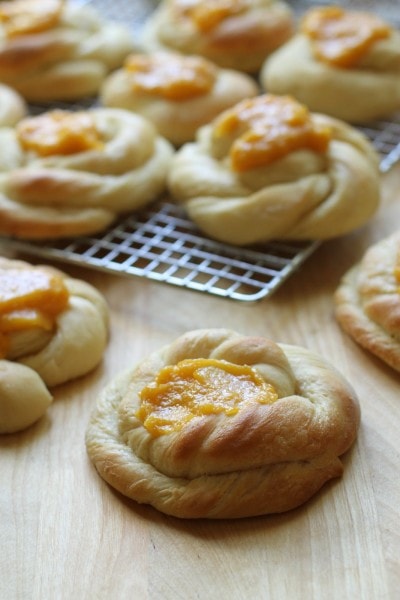 Back in June, I posted a photo of some homemade cinnamon rolls on Instagram (I’m thefrugalgirl there if you want to follow me!), and many of you requested that I share the recipe.

I’d only made the cinnamon version that day, though, and I wanted to wait until I made an apricot batch too so that I could show you both varieties. 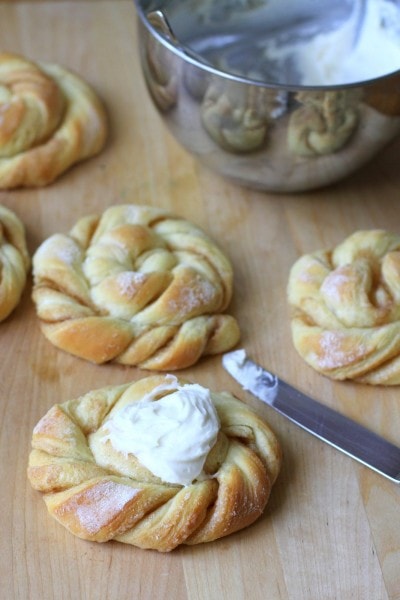 I’ve shared an overnight cinnamon roll recipe here before, but these rolls are free-form (the shaping method is quite different) and they bake on a sheet instead of in a 9×13 pan.

I can’t really say that one is better than the other, as both varieties are really delicious.   You should probably make both kinds and decide for yourself.   😉

The dough for these rolls is the same dough I use to make my bread bears, which I shared here back in 2010. 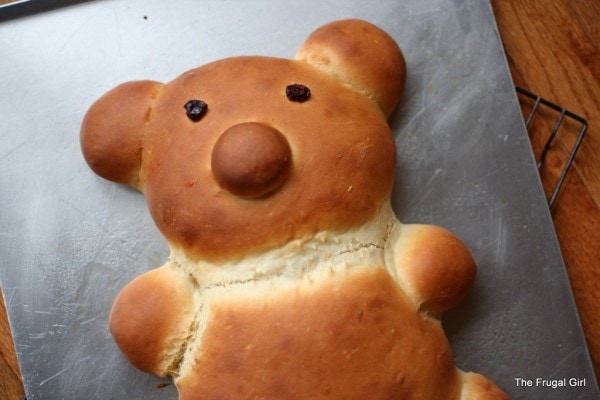 It’s my grandma’s recipe, and these particular sweet rolls are pretty nostalgic to me because every summer when we visited my grandparents in their small midwestern town, my grandma always had multiple baking sheets filled with these rolls.

Every morning, she’d heat some up in her oven (she was quite against microwaves, and besides, an oven does make a lot of sense for heating larger quantities) and serve them for breakfast. 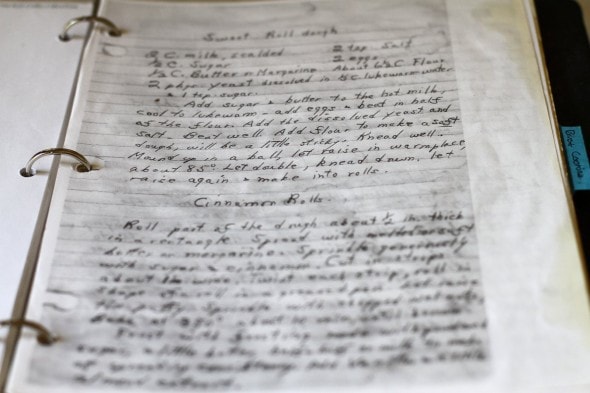 There’s all kinds of happy tied up in these.

And I hope that even though these lack nostalgia for you, they’ll still prove a delightful addition to your baking repertoire.

I posted some step-by-step photos of the dough-making process in the bear bread recipe, so I’ll just refer you there if you need help with the dough.

Once your batch of dough has risen for an hour, turn it out onto a counter and divide it in half.   Roll one half into a rectangle, and spread with softened butter, like so. 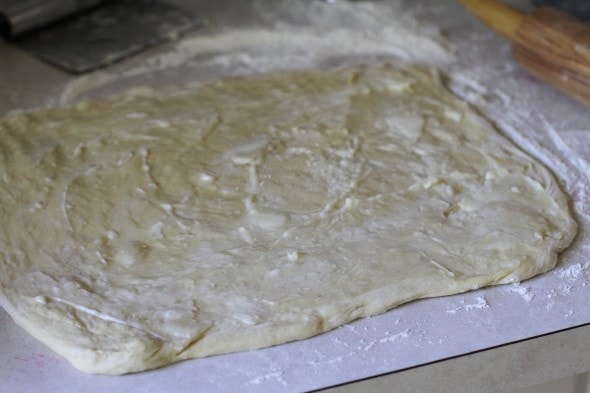 Then sprinkle it with cinnamon sugar.   My grandma was quite non-specific about quantities, and honestly, there’s a fair bit of leeway here.   When you make cinnamon bread, too much butter and cinnamon can make your bread fall, but this is pretty much never a problem with rolls.

As long as it’s fairly thoroughly covered, you should be good. 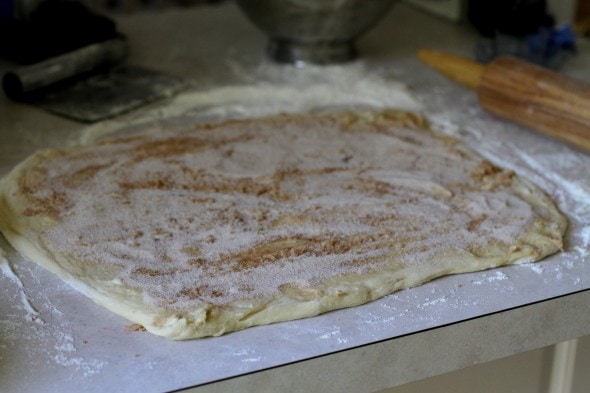 Now take a pizza cutter and divide the dough into strips.   Again, you don’t need to be super precise. 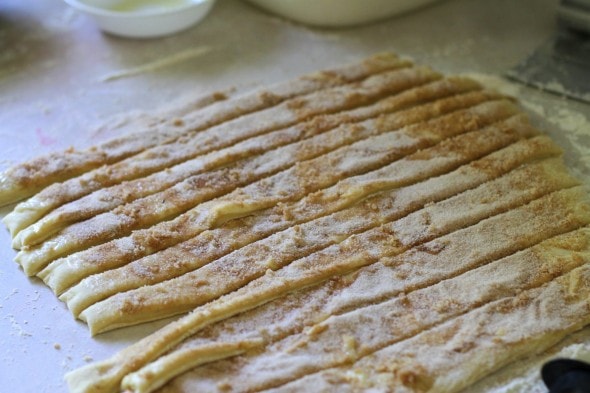 It looks like I cut these the long way, but it’s just a wonky perspective.   Cut them the short way!

Twist each dough strip and then coil it into a neat bun. 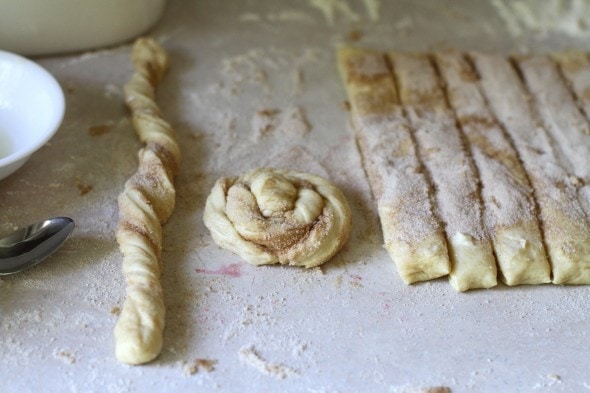 The dough strips stretch as you do this, which makes it tempting to fold them in half like this: 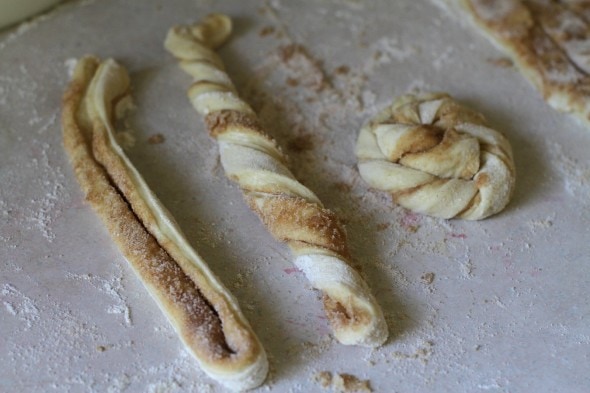 But if you do that, less sugary surface area will be exposed during the baking process, and the resulting rolls won’t be quite as good. 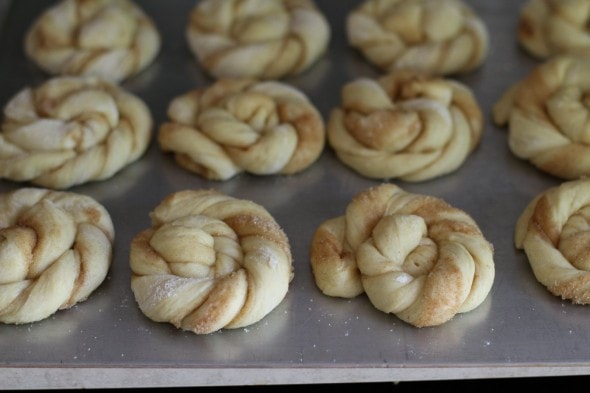 Let the rolls rise for about 30 minutes, and then bake them in a preheated oven for about 10 minutes.   This baking time can vary depending on the thickness of your baking sheets, so keep an eye on them until you’re familiar with what works.   If you have thin sheets, 10 minutes will be good, but thick sheets like the Vollrath ones I own will require more time.

Remove the baked rolls to a wire rack to cool.

These are good on their own, but are even better with frosting. 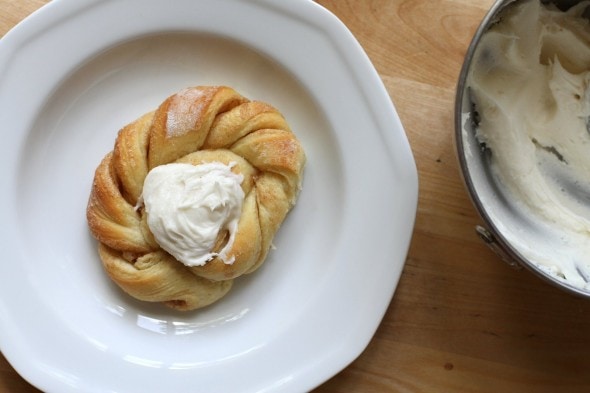 My grandma was again very non-specific with her frosting directions. She just says to mix powdered sugar, a little butter, some half and half, and some vanilla.

But it’s probably something like a tablespoon of butter, 1/2 teaspoon of vanilla, two tablespoons of half and half or milk, and then enough powdered sugar to make the consistency right for spreading.

The process for these is quite similar, but you’ll need to make the apricot filling first.

It’s pretty simple.   Just take an 8 oz. package of dried apricots (apricots are available at Aldi, and they are SO much more affordable there), put ’em in a pan and cover them with water.

Bring them to a boil and cook them for about 20 minutes, or until they’re really soft and most of the water is absorbed.

At first you will think this is waaay too much water, but fear not!   The apricots will absorb it all.

Do keep an eye on them because they can burn if the water level gets too low.   Add more water if necessary.

Put the cooked apricots into a food processor, and process until smooth.   My grandma said to add a cup of sugar, but I usually don’t think a whole cup is necessary.

Now, roll out half of the sweet roll dough, butter it, and sugar it (no cinnamon this time, unless you really want it!) 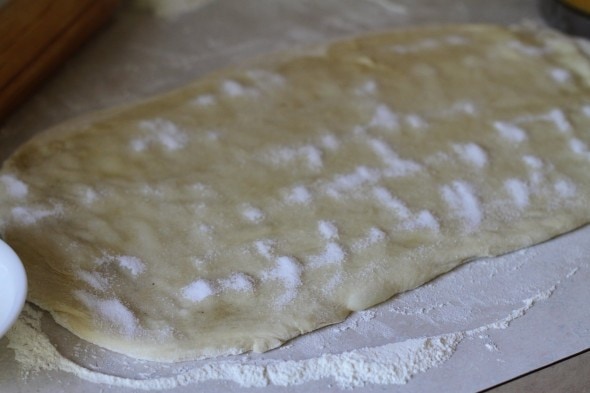 Cut the dough into strips. 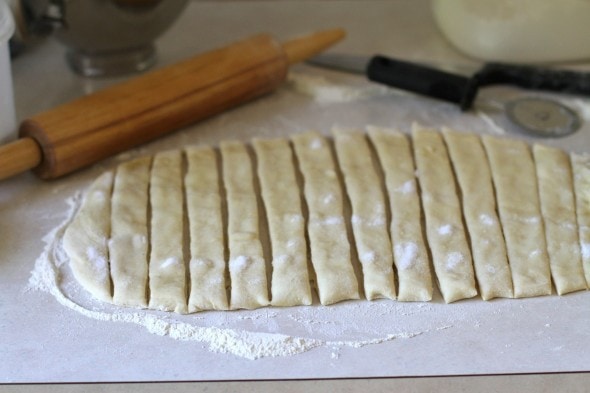 Twist the strips up and coil them into a bun shape.   Again, resist the urge to fold them in half.   You want the sugary sides exposed! 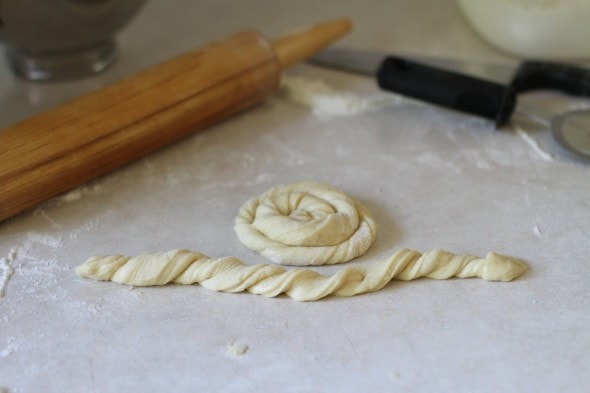 Place them on a greased baking sheet and let them rise about 30 minutes. 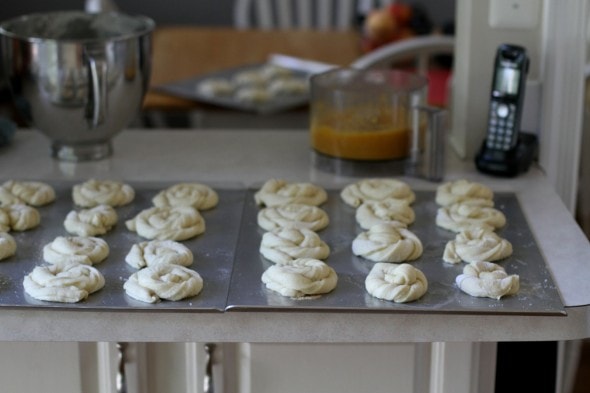 Bake them in a preheated 350 ° F oven for about 8 minutes, or JUST until they’re slightly brown, like this: 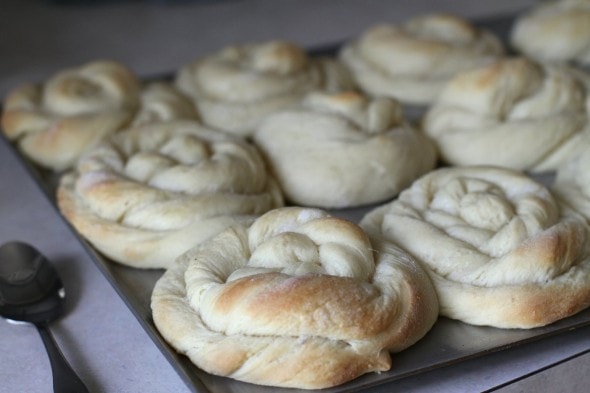 Take them out of the oven, put a little dollop of apricot filling in the center of each, and place them back in the oven to bake for a few more minutes, until they’re golden brown.

Remove the baked rolls to a wire rack to cool.

(info on my baking sheets and cooling racks can be found right here, on my work-in-progress kitchen equipment page.)

In a large mixing bowl, dissolve yeast in 1/3 cup warm water. Heat milk, sugar, butter, and salt to 110 degrees F. Add to dissolved yeast along with eggs and 3 cups of flour. Beat for 3 minutes on medium speed (or stir thoroughly by hand). Add enough of the remaining flour to make a soft dough.

Turn dough out onto a floured surface and knead for 3-5 minutes or until smooth and elastic. Place in a bowl, cover with a wet tea towel, and let rise 1 hour.

Punch dough down and divide in half.

Roll each dough half out into a rectangle.   Spread with softened butter and sprinkle generously with cinnamon sugar.   Cut dough into strips the short way.   Twist each strip, coil into a bun shape, and place on greased baking sheet.

Frost with a mixture of about 1 tablespoon butter, 1/2 teaspoon vanilla, 2 tablespoons half and half or milk, and enough powdered sugar to provide proper consistency.

Place 8 oz. dried apricots into a saucepan and cover with water.   Bring to a boil and gently simmer for 20 minutes, or until water is absorbed and apricots are soft.   Process apricots in food processor until smooth.   Add up to 1 cup sugar and process until combined.

Roll each dough half into a rectangle.   Spread with softened butter and sprinkle generously with sugar.   Cut dough into strips the short way.   Twist each strip, coil into a bun shape, and place on greased baking sheet.

Let rise until double (about 30 minutes) and bake in a preheated 350 ° F oven for 8-10 minutes or until lightly browned.   Remove from oven and spoon a dollop of apricot filling in the middle of each roll.   Return to oven and bake a few more minutes, until nicely browned. Remove to a wire rack to cool.

It's a snow-stormy day here in Chicago, and a perfect day to bake. I made the apricot sweet rolls and am very happy with the results. Thanks for a very good recipe with very helpful comments and tips. I made this using the good tart dried apricots from Trader Joe's, and I used only a half cup of sugar to sweeten them; I like to taste some tartness still in the filling on the rolls. In future I'd probably use closer to 12 oz. of dried apricots to make up the difference in total volume of filling. Also, I just stirred the cooked apricots to break them up instead of pureeing them; the slightly chunky texture worked fine.

Wow! You have a bunch of yeast bread recipes, I can hardly wait to try one. Thanks/Laura

You may have mentioned this and I missed it, but how many rolls does this make?

Um, I'm not totally sure! It all depends on how thin you cut the strips. But I'd say probably 24-30?

This looks like a delicious and not too difficult recipe. Especially the apricot ones--those look wonderful! I kind of like recipes where you have to wait for it to rise or something because it gives more motivation to, say, go for a walk while you wait. Otherwise baking has a way of taking up a whole afternoon sometimes.

Thanks for sharing your recipe! I'll try it one of these days.