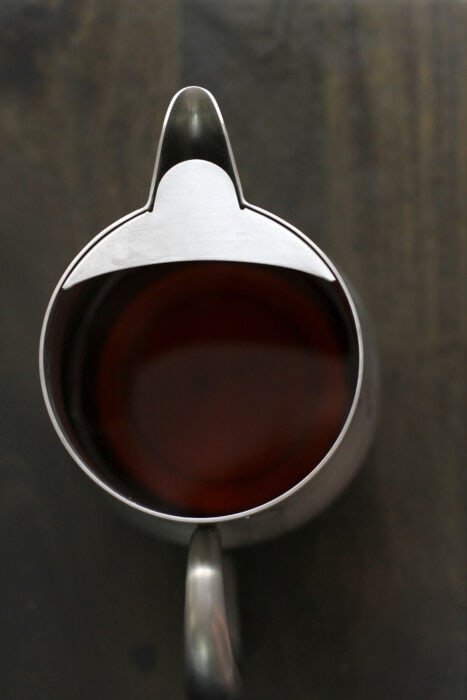 This is so, so much cheaper than buying pre-made tea.

A box of tea bags costs about $3, which is about the price of one of the bottle gallons from the store. Definitely a money-saving option. 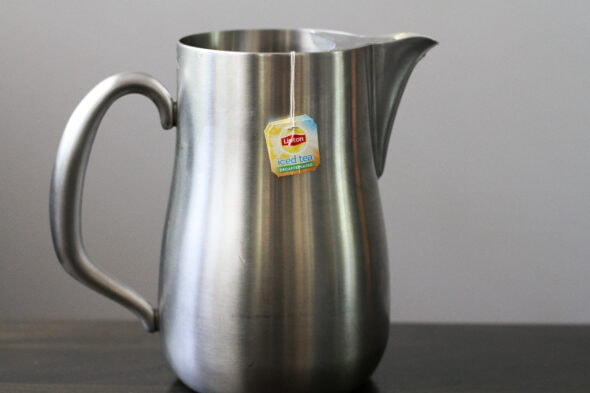 Plus, this way I can make it decaf and just lightly sweetened. It’s a perfect summer beverage.

2. I rescued all the bread ends.

We had a bunch of unloved heels stacking up, so I made a batch of PW’s overnight French toast. That’s always my go-to when I have bread to use up.

I tried a small pan of it with coconut milk last time, and it tasted just fine. 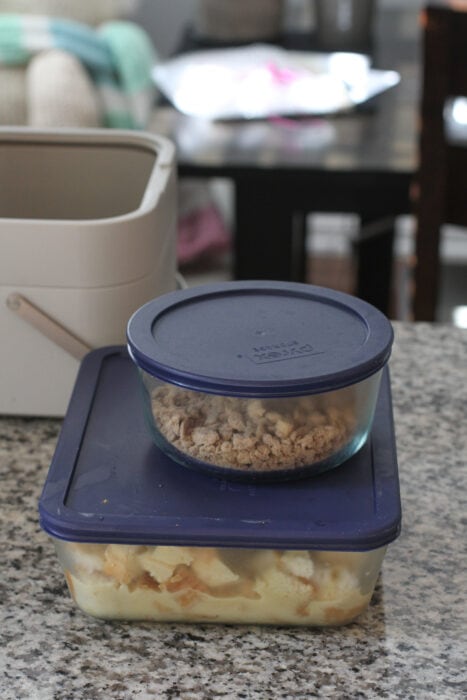 So this time, I just made the whole pan with coconut milk instead of milk. Heavy cream and butter don’t bother Sonia, so the milk was the only sub I needed to do. 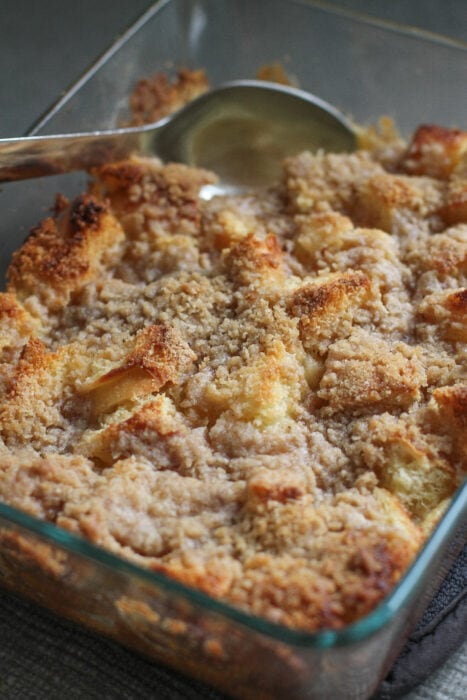 (This is a good example of what I was talking about yesterday: try it on a small scale and then use those results to determine the future direction you’ll go.)

3. I saved my kale and spinach.

They were looking a little wilty, so I soaked them in cold water until they were re-crisped.

It is seriously magical to watch greens freshen up after a cold water bath.

I used all the kale in this salad: 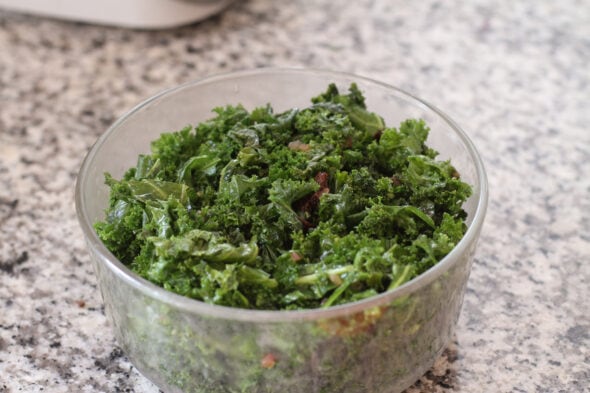 And I froze the spinach for smoothies.

I already used some of the spinach in a smoothie along with some pineapple and bananas that I’d frozen. Yay me!

Here’s how I make my smoothies.

And here’s my review of the Vitamix.

4. I made cinnamon bread instead of buying cinnamon bagels.

The girls like to eat bagels for breakfast and we were out, so I almost picked up a bag.

But then I remembered I was making garlic pull-apart bread for dinner, and when I do that, I always have half the bread recipe left to bake as a loaf.

So, I made two loaves worth of the egg bread recipe, and I made one half into garlic pull-apart bread and I made the other half into cinnamon bread. 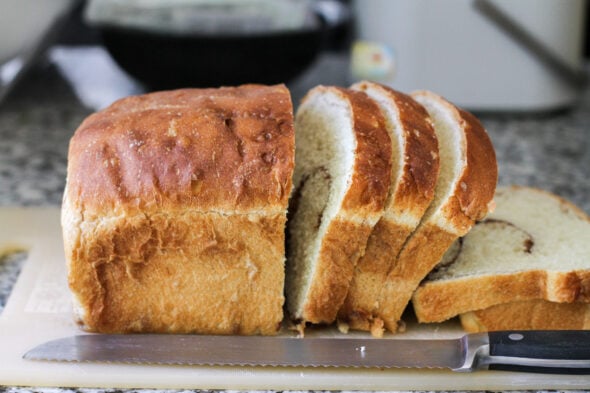 The N95 masks we have (purchased last fall for Sonia’s allergies) unfortunately have a vent that lets out air. 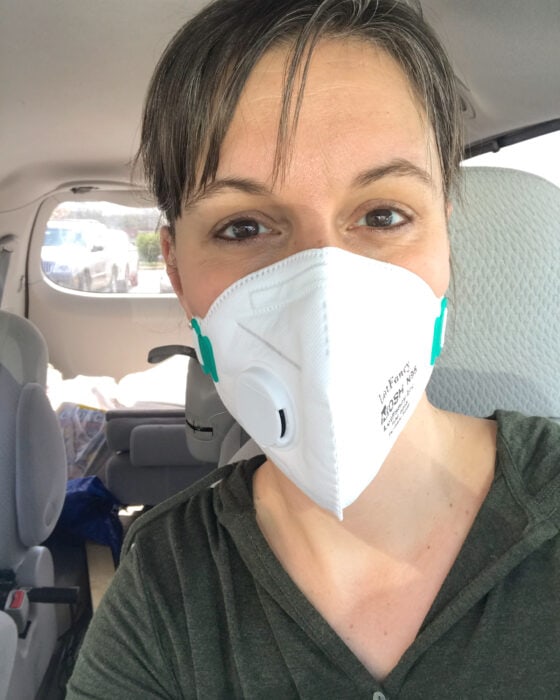 I could tape it up to fix the problem, but I decided to try making a fabric mask to wear.

Sonia and Zoe made some in this style: 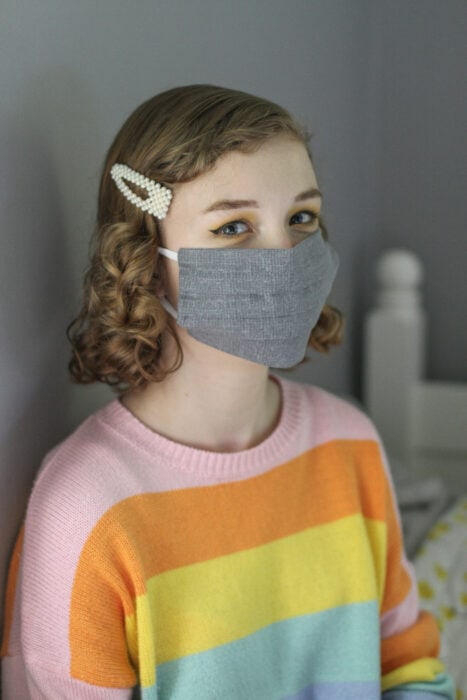 But I tried one on, and it hurt my nose (even this long after nose surgery, my nose is still sensitive to pressure).

So I tried a contoured mask pattern and my first one was WAY too small for me. 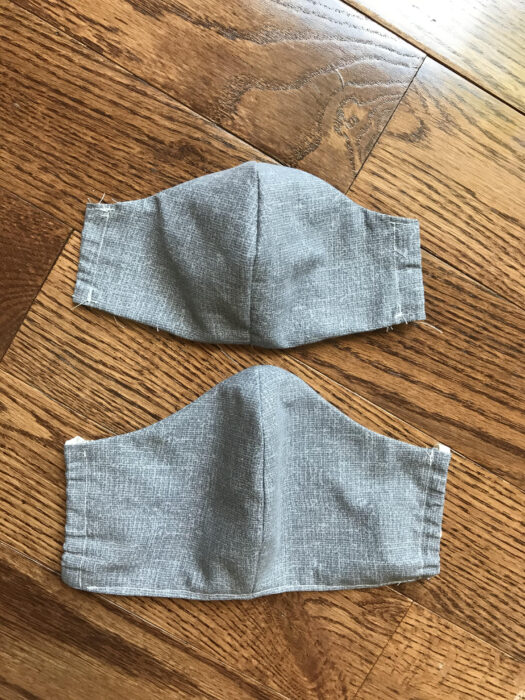 I did some more searching and found a pattern that comes in size Large. This is the Hello Sewing face mask  in a large. 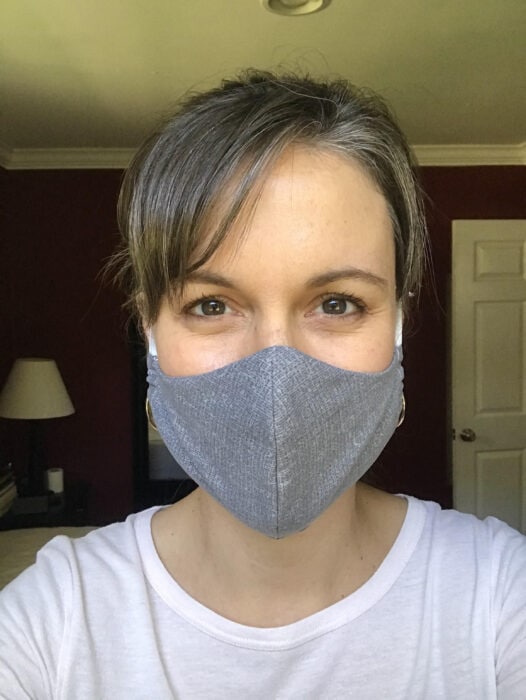 Luckily, the tiny one fits Sonia, so it’ll just be an extra mask for her.

What frugal things have you been up to? Share your five in the comments.

Let’s see what FF I can come up with.

Ordered burritos this week for lunch using a gc from my husbands employer. Husband and I shared a HUGE burrito (instead of each ordering one) and we ordered a frijole e queso for Beamish Boy. Still had to pay $9 for the tip but I’m ok with that.

Doing my own pedicures and skipping manicures. I was a Bi-weekly nail salon patron but even though they have opened back up here in CA, I don’t feel safe going into one. I’ve saved a LOT of money and I’m not sure I will go back.

The garden is starting to produce - is there anything better than eating out of your garden?

Writing letters to friends for entertainment. I love getting and sending letters.

Coming up with fun things for Beamish Boy and his friends to do via distancing. Cookie decorating zoom is scheduled for next Friday and I think I’m going to try and set up a s’mores night. Poor kiddo is missing his friends but is also scared to go back out into the world.

1) took one of my husband's (he no longer fits) 100% cotton buttoned down dress shirts and will use it to make at least 6 masks.

2) bought a pair of fabric scissors to make masks using a 50% off coupon.

3) found matching thread in my sewing basket to make mask.

4) bought 17 pounds of pork shoulder and 4 pounds of ground pork for 99cents/pound.

1) Had leftover smorgasbord on Friday as we were going out of town on Saturday and didn't feel like cooking. Heating up the leftovers was better for our budget and the environment. Win-win. 2) Had a friend feed our cats while we were away. 3) Stayed only one night instead of two. We planned our driving time around the event so we only needed to stay the night of the event. 4) Had potluck for dinner at the event. It was a very small gathering of family only and everyone brought something. 5) We didn't take the kids to any entertainment venues while we were out of town. The gathering at the cabin by the lake and my cousin's dogs were enough entertainment.

We used old cotton works shirts for masks too! I was very happy to be able to repurpose that fabric.

I got this from a friend, definitely worth reading. OSHA Regulations on Masks... thought this was interesting.

I am OSHA 10&30 certified. I know some of you are too. I don’t really know WHY OSHA hasn’t come forward and stopped the nonsense.

Okay so upon further inspection OSHA says some masks are okay and not okay in certain situations. If you’re working with fumes and aerosol chemicals and you give your employees the wrong masks and they get sick you can be sued.

• N95 masks: are designed for CONTAMINATED environments. That means when you exhale through N95 the design is that you are exhaling into contamination. The exhale from N95 masks are vented to breath straight out without filtration. They don’t filter the air on the way out. They don’t need to.

• Surgical Mask: these masks were designed and approved for STERILE environments. The amount of particles and contaminants in the outside and indoor environments where people are CLOGGING these masks very Very quickly. The moisture from your breath combined with the clogged mask will render it “useless” IF you come in contact with Covid and your mask traps it You become a walking virus dispenser. Everytime you put your mask on you are breathing the germs from EVERYWHERE you went. They should be changed or thrown out every “20-30 minutes in a non sterile environment”

*Cloth masks: do not filter anything whatsoever. As you exhale you are ridding your lungs of contaminants and carbon dioxide. Cloth masks trap this carbon dioxide the best. It actually risks health. The moisture caught in these masks can become mildew ridden over night. Dry coughing, enhanced allergies, sore throat are all symptoms of a micro-mold in your mask. The CDC wants us to keep wearing masks. The masks don’t work.

Here is an article from Stanford scientists about cloth masks: http://med.stanford.edu/news/all-news/2020/06/stanford-scientists-contribute-to-who-mask-guidelines.html

I think of the advice to "cover up your coughs and sneezes" that we've all heard. Would some PPE do a better job of containing your sneeze and cough droplets? Sure. But it is still commonly accepted that coughing or sneezing into your sleeve is better than coughing or sneezing into the open air. So wouldn't it make sense that covering our mouths and noses with a mask would help to keep large droplets from dispersing?

Also, consider that people who are immuno-compromised (think of people undergoing chemo) are routinely advised to wear masks when they need to be out in public. If masks offered no protection, doctors would not recommend them for cancer patients.

Lastly, as a Christian, I believe that I am supposed to obey the government unless they're asking me do something sinful. My state government requires masks, and so do all the stores and offices here. So, even if I wasn't convinced that masks were helpful (and I do think they are helpful), I would still wear one because wearing a mask is definitely not sinful.

Also of note: Pence, McConnell, and other Republicans are encouraging mask-wearing: https://www.businessinsider.com/republicans-with-exception-of-trump-now-push-mask-wearing-2020-6

Here's the fab frugal five: 1) Got an email for a free bagel & cream cheese, although I just wanted the bagel Savings- $1.20 2) My job has free fabric masks with the company logo on them, so I took one. I think it's washable too. Savings- $10 3) Used gift cards at Target today. Savings- $23 4) I found a free sub & drink coupon at a local shop while going through a drawer. Savings-$10 5) I have this thing with having my clothing smell good. Those tiny drops that are added to the wash really rock my world. The issue is the price. I keep putting a package of them in my shopping cart, only to take them out due to the price tag. I'm saving serious $ but it really makes me sad! Savings- $12

Your mask looks great! Nice work! 1. Today is my baby's 2nd birthday. (Cue the tears. My final baby has turned 2.) I made and decorated her cake myself. It turned out really good! 2. For something fun today, we spent the day at the beach. There's a local Christian campground we love to camp at and we went as day guests and swam at their lake. We packed our lunch (they aren't offering lunch items at the snack place right now) but bought ice cream and a t-shirt because we are happy to support them. It was a super fun day for the whole family and we were able to do all of that and add on a donation for less than a trip to the aquarium or children's museum. 3. The last 3 days have included side dishes with food from our garden. 4. I found kid-size masks for $4 at Meijer and have been checking for new patterns each time I go. That's the best price I've found and I believe that my oldest will need to have some at school in the fall, so I'm trying to get ones that she'll enjoy wearing (you know, as much as a 6yo can enjoy wearing a mask). Last night's find was pink with unicorns. Yay! 5. Graduation parties have begun. We have a box of graduation cards rather than buying individual ones. Such a better deal.

Oh, and I had already planned to buy a case of baby wipes at the store ($17) and saw that they were running a special that you got $5 off instantly when you bought $20 or more in baby wipes. So I got an additional package that put me right over the $20 and ended up being free.