Old Navy sent me an email about a one-day sale they had on a few dresses, so I clicked on over.

As you know, I tend to buy things in very neutral colors, but the $9.97 dresses were not available in anything neutral.

So…I bought one in a bright color. 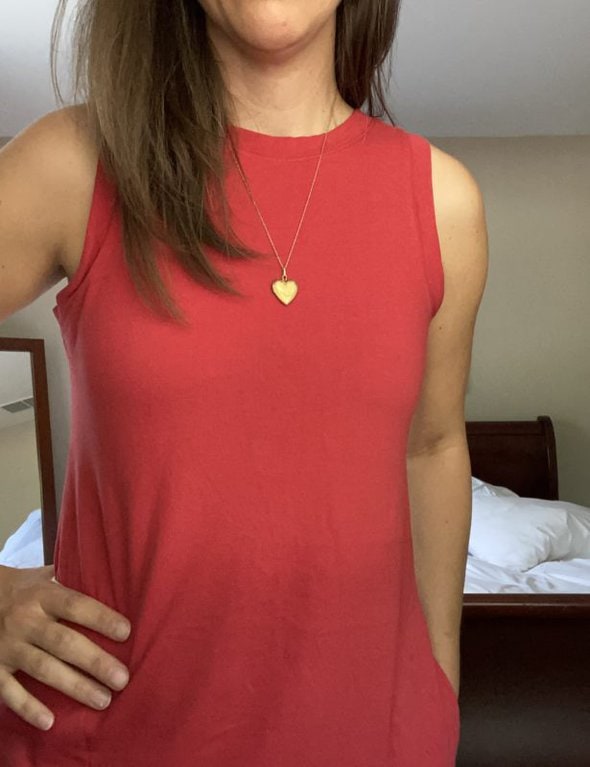 In case you didn’t notice…it has pockets!

I think this might be useful into the early months of cold weather if I throw a denim jacket on over top of it. So, hopefully I can get some wear out of it this year, even though it’s late summer right now.

2. I went to a free symphony concert

I got a local mailing that mentioned a free outdoor symphony concert and I thought, “Hmm, why not? I haven’t been to see an orchestra in forever!” 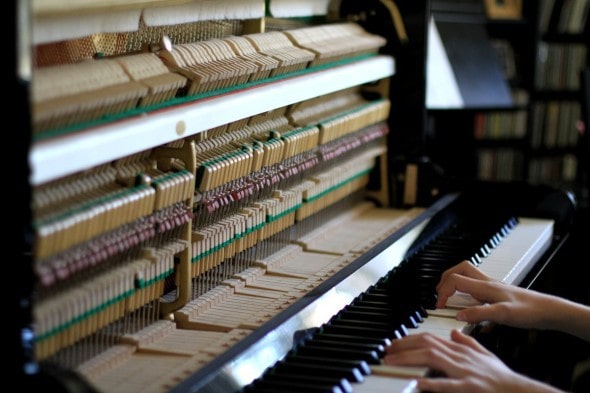 I do not have any pictures of an orchestra. So…here is my piano with the front off of it. It fits the music theme, at least.

The ticket was free, and so was admission to the park.

And happily, they played several pieces that I was quite familiar with, like some Copeland. I always think orchestral concerts are more fun when you’ve heard the pieces before!

3. I got some marked-down sausages at Giant

I was there for a watermelon, but I noticed they had quite a few packages of chicken sausages (both raw and pre-cooked) marked down for quick sale.

So, I bought several packages and put them in my freezer for future use.

4. I bought a textbook for Zoe on Amazon

She ended up switching health classes (it turns out that we’d registered her for a non-entry-level one by mistake!) and I almost pressed the easy button and bought her book at the college bookstore ($97).

It’s not a book Zoe is going to need after this semester, so I will sell it on eBay as soon as she’s done with it in December.

I never let textbooks sit around here for long! 😉

We had a family crisis and live in a rural area so I spent Labor Day prepping a bunch of easy meals ahead and that carried us through the week behind. Beyond that I couldn't tell you what I did that was frugal! I lived in the mode of 'what has to be done NOW' all the rest of the week.

Your new dress is so cute. You can extend the wearing season by putting a turtleneck underneath, wearing tights and boots as well as putting a jacket over top.

I just boiled a batch of washcloths last week too. Worked like a charm to get them smelling fresh again. I learned this tip from you and have used it many times, so thanks again!

We went away this weekend using reward points so the hotel was free! I packed us cold cuts and we ate breakfast at the hotel every day so we only ate out once a day. I’m at a new job where I need to pack my lunch because nothing is nearby. I’m terrible at this so it’s a big step for me! I bought ground beef with a 50% off sticker because it was expiring soon, but we needed it for dinner that night so it didn’t matter.

Bought $0.99 per pound chicken legs at Costco. They come in 8 packages all together. Like 'em alot. I could eat chicken every day. I like Alyce Morgan's ways of cooking, https://moretimeatthetable.com/2022/08/23/cheep-eats/#more-38688 "Oiled, seasoned, browned on top of the stove and finished in the oven."

Love this site. This is my first time posting. On Labor Day went with hubby to Dick's Sporting Goods to buy him some new golf shoes. Joking with the teenage cashier "Do you have a senior citizen discount? AARP, AAA anything?" He said no I don't think so. My husband chimed in "How about the James discount? (His name is James) no I don't think so. We laughed saying well it never hurts to ask. The cashier said yep never hurts to ask. I can give you 20% off. REALLY? $110.00 shoes came out to $87.00. including tax. Yahoo!!!

Nice. You got the "you made my day slightly less boring" discount!