From where? The Buy Nothing group OF COURSE. 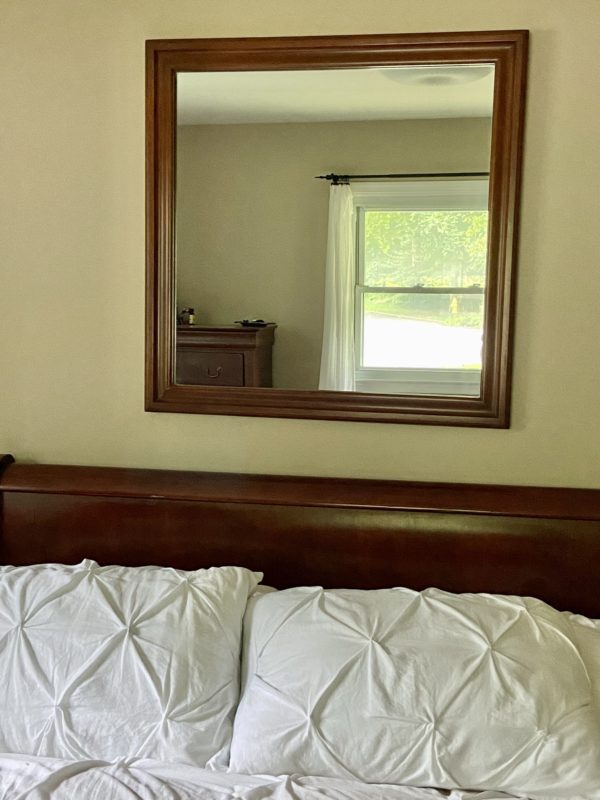 I thought it was going to be just your run-of-the-mill type of mirror, but this thing weighs over 30 pounds, and the label on the back says it was made in 1962!

I wanted to hang it over my bed, but I did not want to risk a concussion from a mirror landing on me in the middle of the night.

So my dad brought his stud finder over, and mercifully, two studs were perfectly placed to hang the mirror. 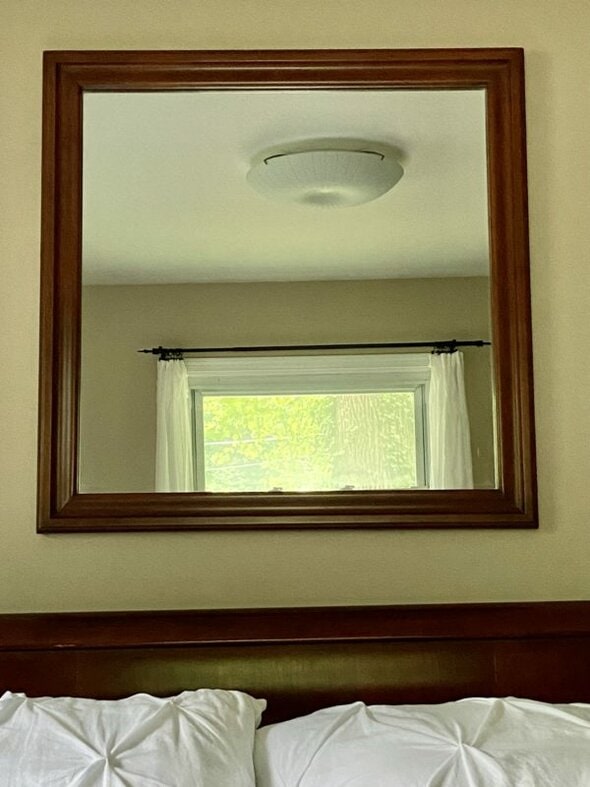 How you can tell I’ve been doing human biology classes: sometimes when I lay in bed, I look up at the light and think about how much the shape reminds me of a red blood cell.

When we toured Monticello years ago, the tour guide said that Thomas Jefferson tried to make a habit of hanging mirrors opposite windows, to reflect the light.

So, now I have a mirror hanging opposite one of my bedroom windows, and I’m delighted.

Most of the seals on my rental’s windows are broken, which makes the windows a little cloudy and dark. And that means a little more light reflection is a very lovely thing!

We’ve been getting by with a spoon-as-ice-cream-scoop situation here, but we all know that eventually leads to bent spoons.

(No spoon is made to withstand the force of ice cream scooping forever!)

I saw that Cook’s Illustrated recommended the Zeroll scoop, and since I wanted to buy one and be done forever, I decided to spring for it. 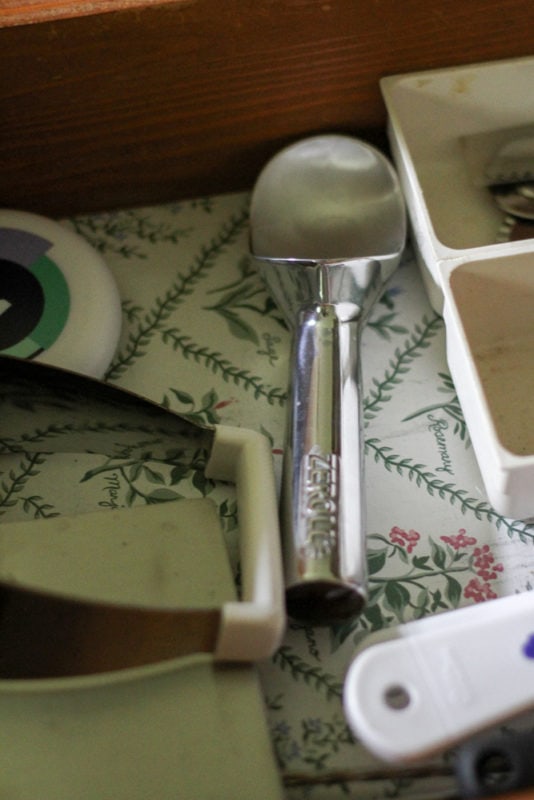 when I uploaded this picture, I realized: I need to clean those white drawer organizers!

But then I saw that there was an Amazon warehouse refurbished scoop for $19, so I ordered that one.

It’s only a $5 savings, but it did make the scoop price point slightly more reasonable.

3. I got some free drill bits and screwdriver bits

I had a drill already, but no bits. Lisey has a set of bits I can borrow anytime while she’s here, but obviously, she (and her tools) are only a temporary presence.

And even she doesn’t have any screwdriver bits.

I almost stopped in at Home Depot to buy some for myself, but then someone on the Buy Nothing group had a few bits and screwdriver heads they no longer needed. Yay!

This isn’t quite a full set, obviously, but it’s more than I had before, and I’m especially happy to have screwdriver bits.

4. I bought snacks for my plane trip

I stopped in at Aldi before my trip and got some granola bars and almond-filled pretzels, and I stashed them in my bag. So, I made it through three flights and lots of hours at the airport while only buying one meal.

A gallon of premade iced tea is not terribly expensive at the grocery store, but it is not quite as cheap as making it at home.

Also, the tea I’m using is some loose-leaf that a friend gave me when she was moving. So, that means my homemade tea is very nearly free; I’m just paying for the water and the electricity to heat it, plus a little sugar. 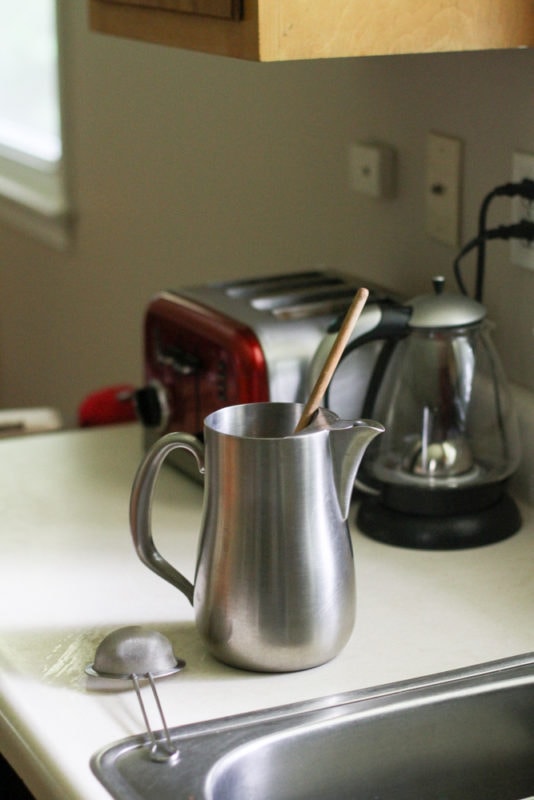 Incidentally, that pitcher is a $5 Goodwill find from some years ago. The brand is Walco, and apparently, it’s a restaurant supply pitcher, which sells for $156 at Restaurant Supply!

Your turn; what frugal things have you been up to lately?

Hi Kristen, Thank you for your encouraging and uplifting blog. I have followed you for many years, but this is my first time posting. My reason is that I am concerned about the beautiful heavy mirror that you have hung over your bed. Even though the mirror is hung on 2 studs, it could shake loose and fall on you if you had an earthquake. I haven't read all the comments, so maybe someone else has already mentioned this. Regardless, I want you to stay safe.

Aww, thank you for your kind words and for your concern. The area I live in is not at all earthquake-prone, so we generally do not have to stress about hanging things on the walls. But if I lived in California or something, I would definitely put the mirror somewhere else!

Love the ice cream scooper and the great price. Your mirror story reminded me that we still have my dmil's living room mirror that weighs a ton. We should hang it in dh's bedroom so he'll get more light in there. I prefer to sleep in deep darkness.

Dh took one for the team and ate the leftover salmon and baked beans today for lunch, along with two (!) english muffins. He did have to put some good filling food in his belly to last him his 18 holes of golf that he played this afternoon into the evening.

I ate the second half of my 6" Subway sub. Since my sleeve gastrectomy I can eat about 3 bites of the sub which is about 3" of a 6" sub and have some left for the next day.

I went 40 miles today to my favorite oral surgeon for an appointment. The appointment was for an extra, nothing else. I will have the screw put in in September. I swear this whole process will take over a year - I'm getting an implant. Good news is if I have to wait til January to get the crown made I'll have new money in my dental account to pay for it.

Have to check into my FSA account. We have $2500 on it and there is almost $1600 left in it. Hubby and I won't use that much for prescriptions this year as I'm on a waaay lower dose of insulin and my meds are lasting longer as I can't get that many in my skinny tummy tube.

Other than that, cooking at home, monitoring electric and AC, running the dishwasher for 30 minutes after I rinse the dishes real good. Not driving too much and hubby has a company car and he only goes into the office 2x a week.

Your ice cream scooper reminds me of the kind that were used at the Friendly's that I worked out. It was a restaurant that was famous for it's ice cream items. I scooped many a cone and made many a sunday or milk shake with those scoops.

I don't feel very frugal this week as we've had to do some necessary spending, but I guess that means it's good to look for the ways we have been frugal:

I've picked and processed (frozen or canned) over 15 pints of raspberries and blueberries, which makes me incredibly happy. The blueberries are wild and the raspberries are compliments of a generous neighbor. I love berries, but they are a definite treat!

My SIL was getting ready for a Goodwill haul, and I was able to take a small chair, a night stand, several pieces of wall art, 3 pairs of shoes and a few articles of clothing. She's happy; I'm happy!

I returned some rodent traps to amazon that my husband decided he did not need. I'm glad amazon makes the process so easy and that my very small town now has a UPS drop off point in our tiny grocery shop.

I've canned 4 pints of green beans and 5 pints of greens. At the current rate of inflation, I estimate that will save me $364 off my grocery bill. Ha.

We are at a point where I do not need to buy any fresh produce. The garden is giving us all we need with plenty to share.

Jefferson wasn't the only one who had a thing about mirrors -- Charles Dickens filled his writing chalet with mirrors, positioned so they caught the light and bounced it around the room, along with leaf shadows, bird movements, etc. He wrote about it in more than one letter, and said he loved it.

(I think he enjoyed this effect elsewhere in his house, too...like his dining room.)