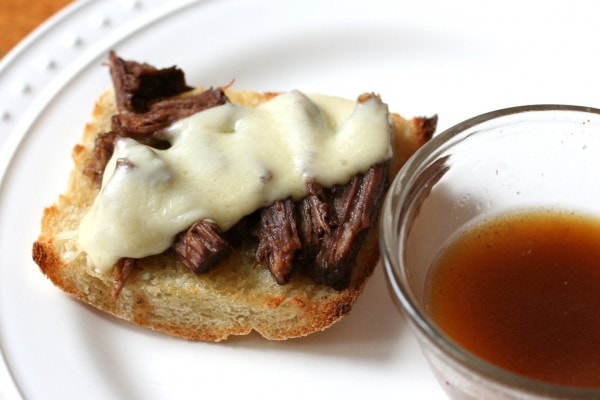 Today’s recipe isn’t a particularly quick one but since it doesn’t require much in the way of hands-on effort, I think it still qualifies as easy. 😉 I got it from Taste of Home and modified a couple of things.

The original recipe calls for a rump or bottom round roast, and while those do go on sale for a decent price, I’m not a big fan of the texture or flavor of those cuts of beef. So, I use a chuck roast when I make this recipe.

It doesn’t slice as neatly as rump or round roasts do, but the meat is much more tender and moist, so it’s a trade-off I’m willing to make.

Also, the recipe calls for adding sauteed onions to the liquid for cooking the beef, but I’ve found they just turn into mush after several hours in the oven. So, I leave them out. If you really want onions for your sandwiches, I’d saute them and add them to the beef a half hour or so before it’s done baking.

I use homemade French bread for these sandwiches, but doing so probably removes this recipe from the “easy” category. Using French bread from the store is perfectly acceptable, and is probably a great use for those day-old bargain loaves.

Anyhow, here’s how to go about making these sandwiches.

Heat 2 tablespoons oil in a Dutch oven over medium high heat. Add the chuck roast and brown on all sides. 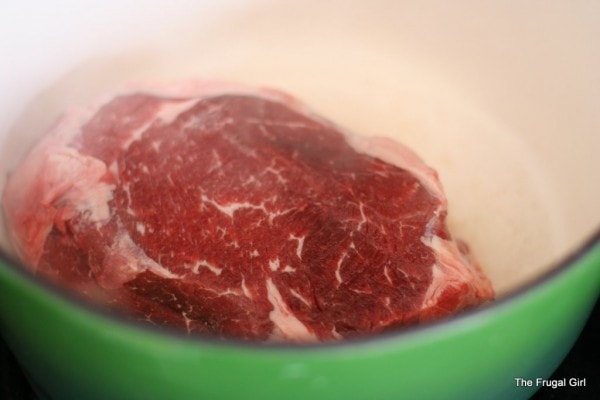 Add the garlic and saute for 60 seconds or until it’s fragrant. 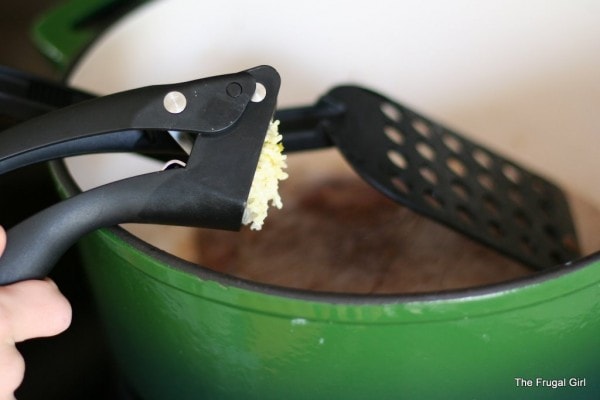 Combine water, soy sauce, and onion soup mix, and pour over top of the roast. 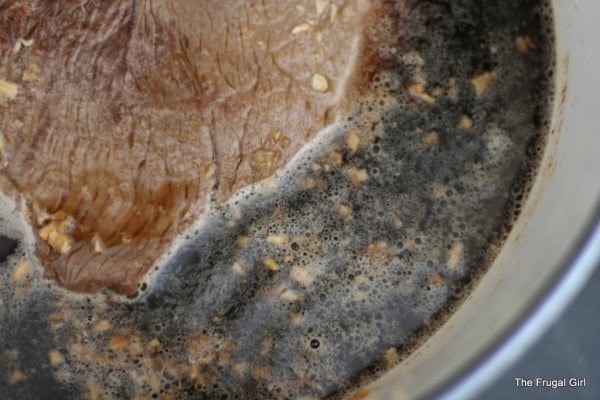 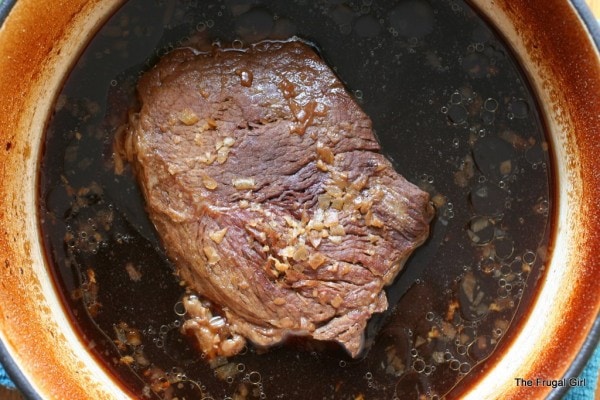 Remove the meat from the juices and let it stand for 10 minutes. Slice, or if you use a chuck roast like I do, pull apart into bite-sized pieces, and return the meat to the juice.

Cut a loaf of French bread in half lengthwise and then into 3-inch sections. Spread with softened butter and broil 4-6 inches from the heat for 2-3 minutes. 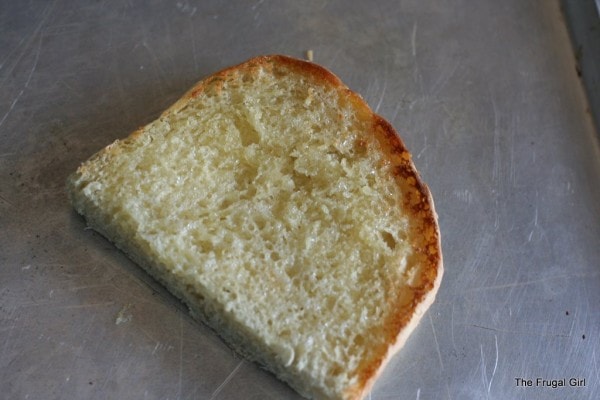 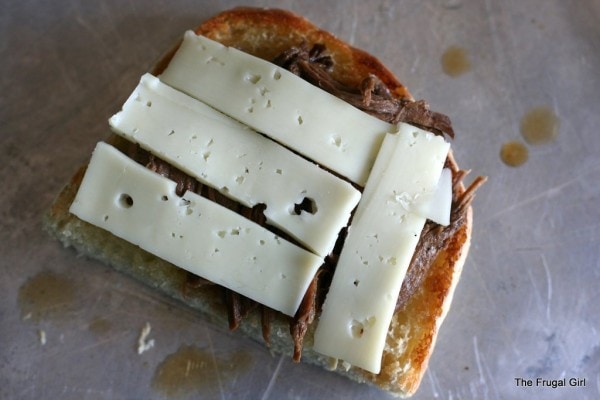 Broil for 1-2 minutes or until cheese is melted. Serve promptly… 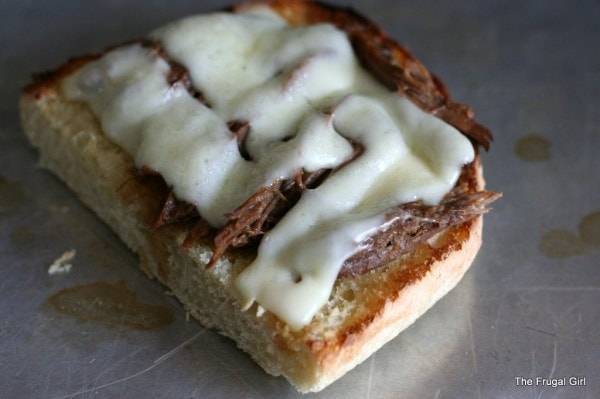 and alongside, include little bowls of the pan juices for dipping the sandwiches. 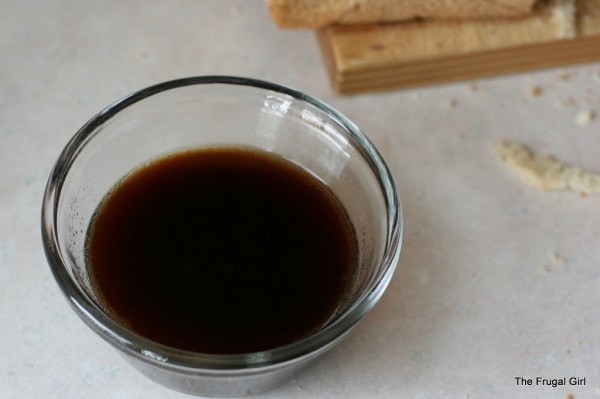 In a Dutch oven over medium-high heat, brown roast on all sides in oil; drain. Add garlic clove, and saute for 1 minute. Combine water, soy sauce, and soup mix. Pour over roast. Cover and bake at 325 ° for 2-1/2 hours or until meat is tender.

Let stand for 10 minutes before slicing. Return meat to pan juices. Slice bread in half lengthwise; cut into 3-in. sections. Spread softened butter over bread.

You may also be interested in my other main dish recipes.

Looks yummy! My mom has always cooked her beef au jus sandwiches in a crockpot. Also, she puts onions in with the broth and the meat and they usually aren't SUPER soggy, despite cooking several hours.

Suggesting your homemade French Bread might take the "easy" out of this recipe for some...but, your bread is REALLY easy to make! I'm a college student and I've been teaching my friends to make bread using your recipe :)

My family loves it when I make this. The first day I make it we eat it like pot roast. I oven roast root vegetables, homade apple sauce and biscuits. The next day we have the leftovers as beef au jus sandwiches.

I used the leftover meat in tacos (like brisket tacos) and they were delish!

Made this for supper tonight and it was a hit with the whole family, even my two-year old. A fast and easy dish for me to throw together, especially with a newborn to keep happy. Thanks for sharing with us, Kristen!

Could you do this with a crock pot instead of a dutch oven? I'm not even quite sure I know what the difference is between the two.