In September, Mr. FG and I took the girls on a rather last-minute trip to Myrtle Beach.   We hadn’t been in a couple of years, and Joshua wasn’t free due to his college classes, but we decided to just head down with the girls. 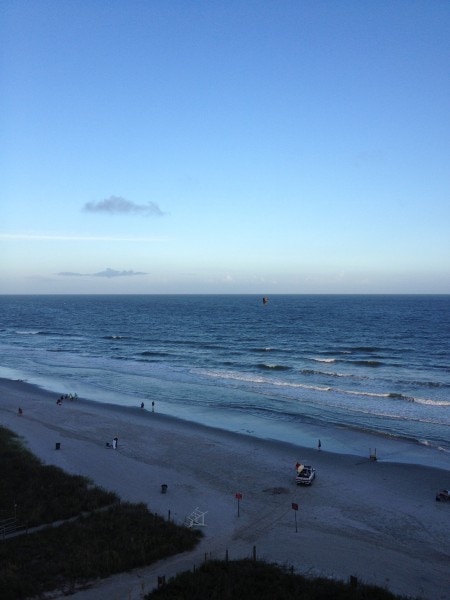 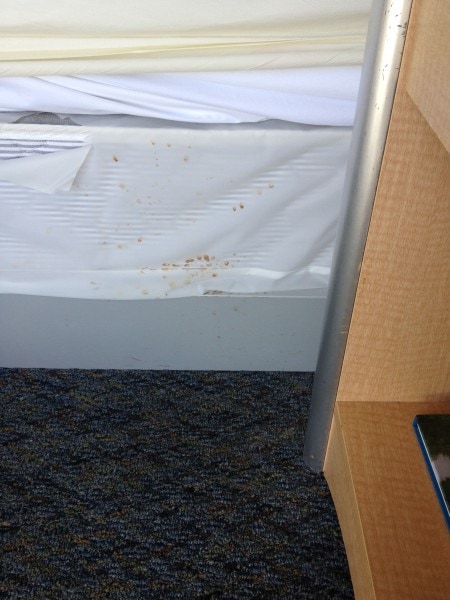 Between missing Joshua, feeling displaced and not at-home because of the condo issues, we were not feeling very happy at this point.

We decided to make the best of it, bought some groceries, went to bed (our mattress was reminiscent of a rock, incidentally), and the next day, we went out to use the many pools this place had. 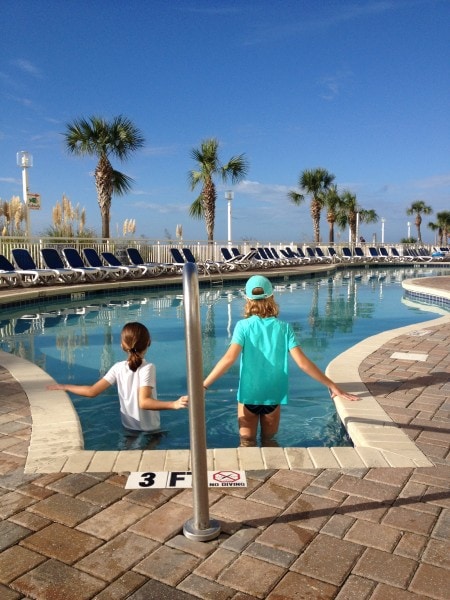 But we soon discovered the outdoor pools had a weird pink foam in them. And the indoor pool was dirty, plus it was missing parts of the ceiling.

The next morning, we went to chat with the rental agency, and asked to be moved.   So, they sent us to another building, but that unit was pretty dirty too.   The third unit we were sent to was a little better, but still not great, and it was small. However, the building was better maintained, so we decided to cut our losses and stay.

It was kind of a pain to pack and unpack all of our stuff, and it used up a good part of one of our vacation days.

Suffice it to say, this trip had disappointing lodging issues.

Also, it rained every day.

We didn’t see a single sunrise because it rained every morning.

Plus, Lisey missed her cousin dreadfully (normally, her cousin and her family come to the beach when we do.)

And we all missed Joshua (this was our first time vacationing without him!)   Some tears might have been shed.

Oh, and I forgot my camera battery charger.

Which means that what I wrote above isn’t really the whole story. 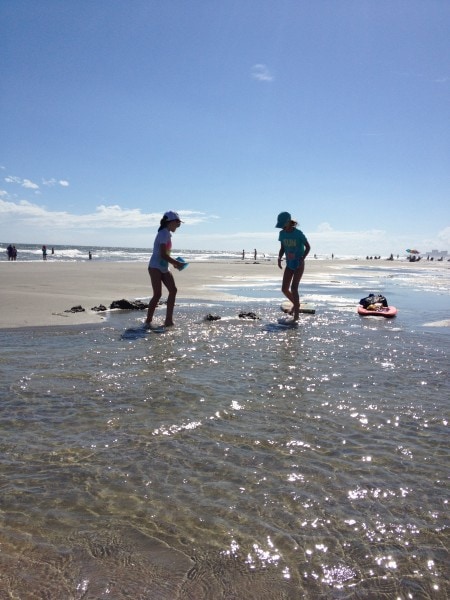 Even though our end condo wasn’t awesome, we felt a lot better there because we were out of the sketchy section of Myrtle Beach.   And since it’s the area of beach we’re more familiar with, we felt so much more at home.

It did rain every day, but it didn’t rain all day.   Every day, there were periods of sunshine, and we worked around the weather. 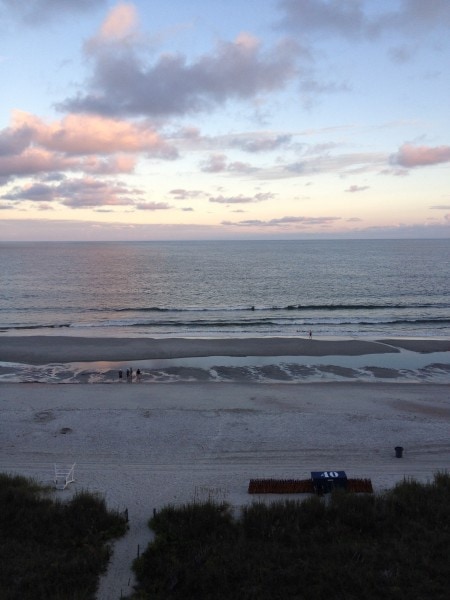 Sonia and Zoe got in plenty of wave-jumping time.

We swam in the pool and sat in the hot tub. 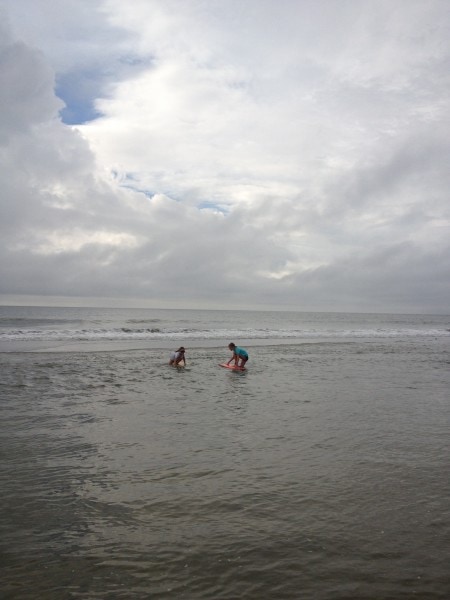 We shopped at store full of purple things, and appropriately enough, I had a purple-ish shirt on, so we documented that. 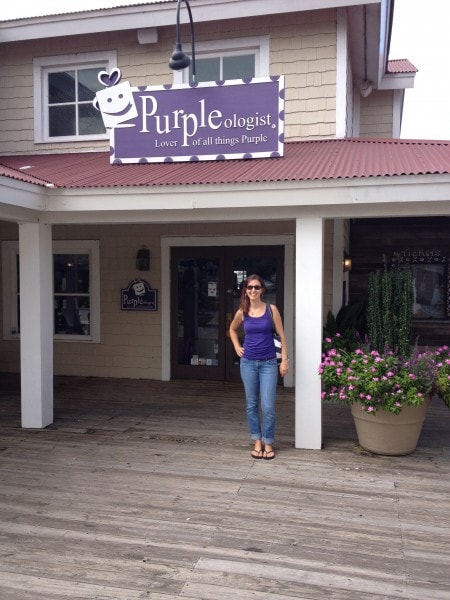 Lisey fell in love with a super cute stuffed penguin there, almost bought him, slept on it, and came back the next day to buy him.   She named him Tate. 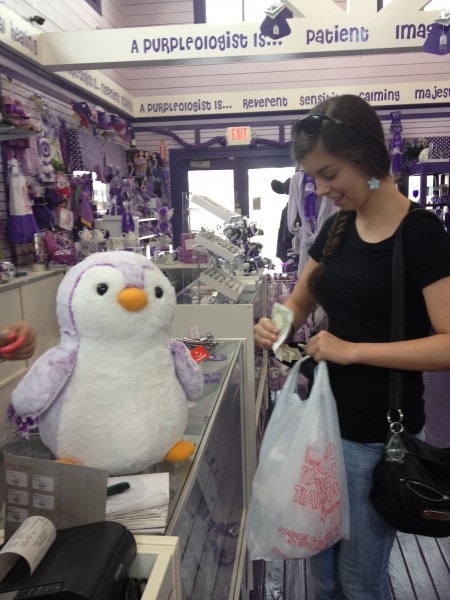 Tate has been Lisey’s fast friend ever since. 😉 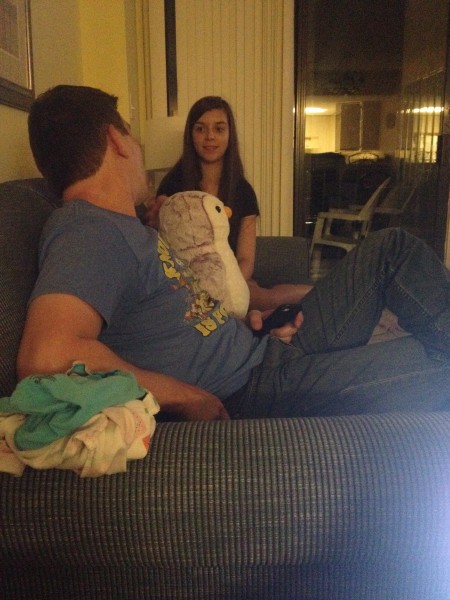 I love this about Lisey…she gets so excited about things like uber-fuzzy penguins. 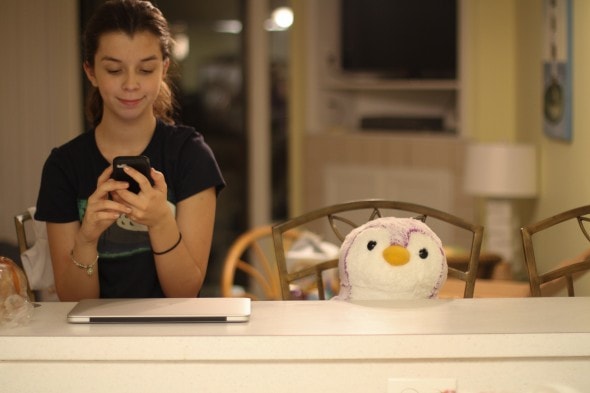 Lisey and I went to get a pedicure together (our first time!), and the technician thought we were sisters (This was before my nose surgery. I look even more like Lisey now. 😉 ). 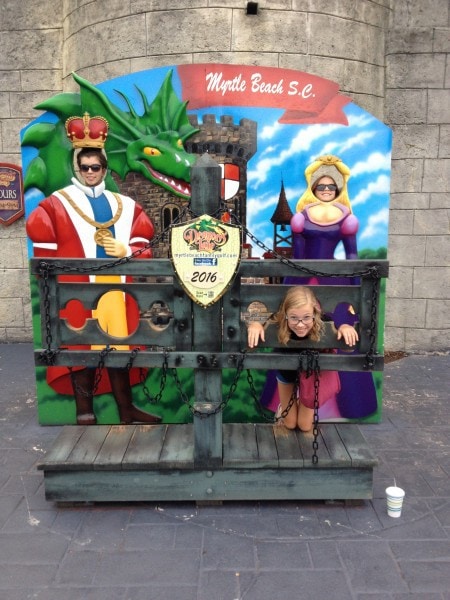 We texted with Joshua every day, so we could hear about his work and school adventures.

Joshua got to stay with a friend so that he wasn’t by himself the whole week.

Mr. FG and I went out for a date one night, and before we went, we took the girls to a fro-yo place where they each made a creation to eat for dinner. 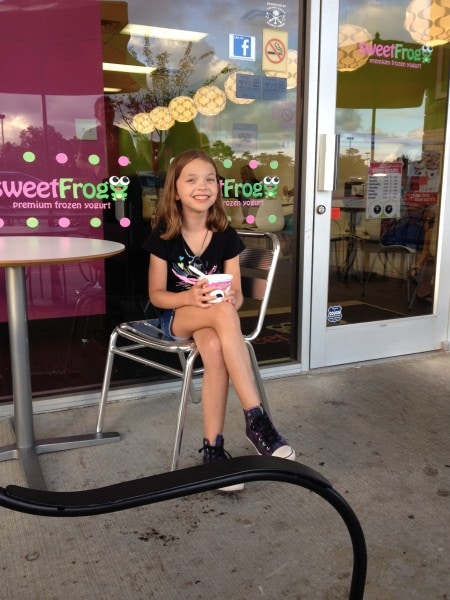 Because vacation is a time when you can eat fro-yo for dinner. 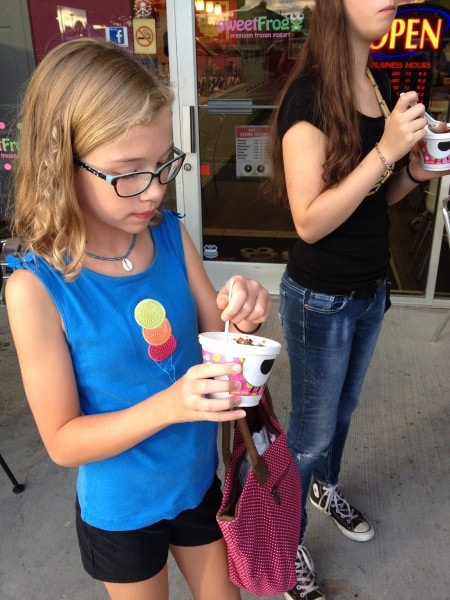 (At the end of the week, Sonia was like, “I feel like I need to eat something green. A salad, maybe?” Even vacation eating gets old after a while, I guess.)

On our date night, we had an awesome taco dinner, and the guy doing live music there was fantastic.   So good.

I got a whole week off of cooking dinner, which was lovely.

The girls got an inordinate amount of joy out of using the soda and snack machines in the condo. 😉

I might not have been able to use my SLR much, but I do have an iPhone, so I got to take pictures and videos. 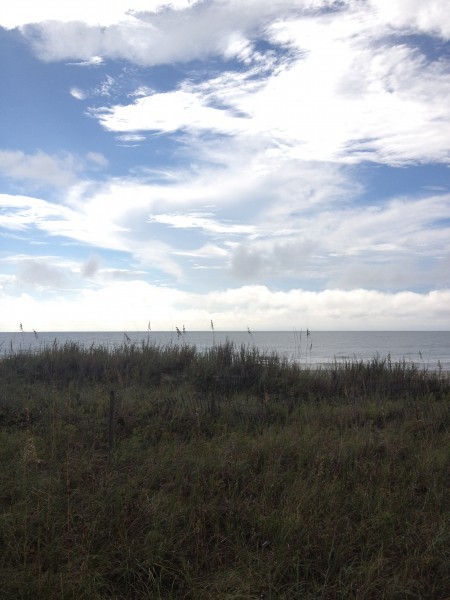 I don’t think either version of this story is the “right” one…they’re both true.   But it’s easy to let the womp-womp version of things take over when stuff goes wrong in life (or on vacation especially!) 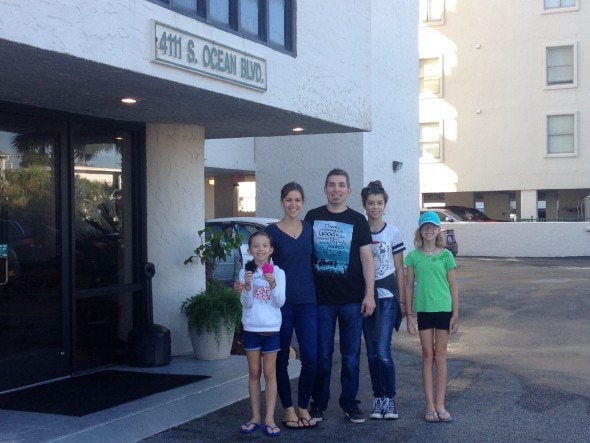 I don’t think we need to pretend that the bad things aren’t there (the condo WAS gross! We did get a lot of rain! We did miss Joshua!), but it’s important to not let them take over.

There were unpleasant things, but there were also happy things, and the older I get, the more I learn that it’s important to see and expect both.

We have had really great luck booking lodging with Airbnb. We have stayed at places all over the world and I spend a lot of time reading the reviews and looking at the pictures. We have always been glad to stay in a residence. Consider that for your next trip.

Family vacations are such a mixed experice for us right now. Our 20 year college daughter has not with us the last 3 years, and it just does not feel right. Now our middle child is 18 and his work and soon college schedule will be his priority with scheduling. So my 13 year old is left with the prospect of having a very different experience for vacations in the next few years. Honestly I feel so sad. I want her (and me) to have us all togehter for vacation. I'll find a way for us to be together, but I'll have to get creative. Happily the older kids love to be us and their little sister, it's a timing thing!

WOW! On our 20th year Anniversary we went to Myrtle Beach and had the same thing happen to US! We were so bummed out. The Hotel was dirty, roaches crawling all over the patio (near the pools), our bathtub was stained :O, there was NO Wi-Fi, and our son got a high Fever the WHOLE week we stayed.. :( Oh not to mention my youngest and I got lice! I had to cook and the 3 kids were bummed but WE as parents tried to laugh it off...because that is what parents do...we did manage to stay in the sun a bit though... and eat out twice @ *Cracker Barrel Rocks). NEVER will I stay there again... But we pulled through and sometimes we have to be grateful with whatever comes our way... It is isn't meant for us to live in 5 Star hotel anyway....... Some have no home to return to in Tennessee....etc.... Could be a heck of a lot worse...

My family had a vacation like that. We knew it would be rustic - no running water, on a glacier, accessible only by boat.

What we didn't know that there was also no electricity (my parent's cabin had solar, but it'd been cloudy for days so that didn't last long; something the jackass of a manager should have told us, but didn't). Heat provided by a propane heater which only the short-handed staff were supposed to light and couldn't be left on all night. The private toilets were non-flush toilets in a separate space that we had to go outside to reach. The path from the boat dock to the cabins was almost vertical (I'm not exaggerating), a challenge for my mobility-impaired mother.

Plus it was 15 degrees colder than usual and drizzly, so the bare rock was extra slippery and extra challenging.

Like our good FG, I refused to give in. I made a video of family members joking about the place and pointing out the good parts: the guide who didn't have to escort us on walks but did, and showed us where to find the stunningly flavorful wild blueberries. The unexpectedly comfortable beds, complete with super warm and soft fur blankets. The friendly crew who offered to bring breakfast to my parents' cabin. The cabins that were scrupulously clean and classically beautiful in a Nordic style; ditto the outhouses (cleaner than many kitchens I've been in). The tasty local foods. And, of course, what we were there for: the geology of the place, the icebergs, and the glacier.

Now we look back on it with laughter and some pride that we made it through in good cheer.

I love seeing both sides of the coin because I think often on blogs and social media people present only the A+ version of everything. So thank you!