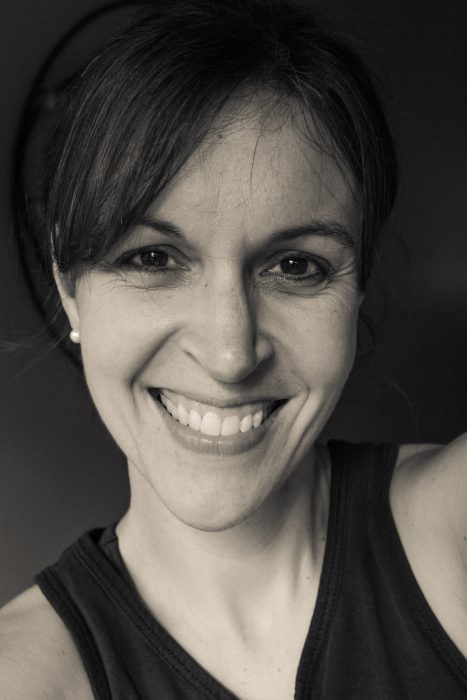 A reader recently asked how things were going with my nose, and that reminded me that I should do an update.

(I know it’s seriously off-topic for my blog, but never fear. I won’t be doing nose updates every month!)

For those of you who are new here: I had functional rhinoplasty done in November of 2016 to correct some serious breathing problems I had.   A ENT/plastic surgeon did the procedure because my ENT doctor doesn’t do surgeries that affect the way the outside of the nose looks. 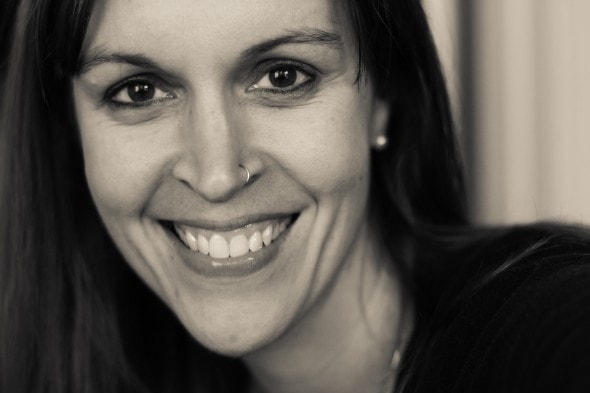 my nose before surgery

For more on the background behind my surgery, read I’m getting a nose job. And it’s going to save me money.

During the surgery, my doctor broke my nasal bones, fixed my deviated septum, shaved down my nasal turbinates, and widened the end of my nose so that my nostrils wouldn’t be so pinched and would allow more air through.

The first week post-surgery was pretty rough, and I had a fair amount of swelling, but not much bruising.   Sleeping was hard, and my nose was very, very sensitive.

Instead of having my nose and sinuses packed with gauze, I had a cast plus silicone tubes up each nostril for a week.   I’m sure these are better than gauze, but they were still pretty uncomfortable, and they felt especially tight as my nose became less swollen over the week.

There are links to photos of me in my nasal cast right here.   Skip by if you’re super easily grossed out!

Since I didn’t feel good and because I looked a little weird with the tubes and cast, I just stayed home until my follow-up appointment.

Getting the tubes out was pretty unpleasant, but I was super glad to have them out of the way. 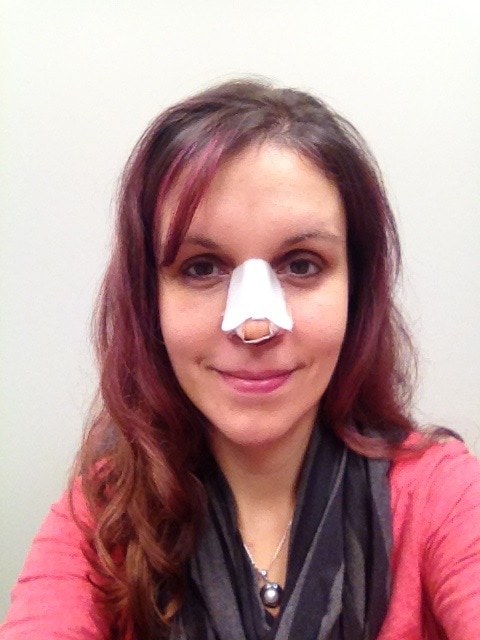 right before my nasal cast removal

After my tubes were removed, my nose was looking fairly good, but definitely swollen. 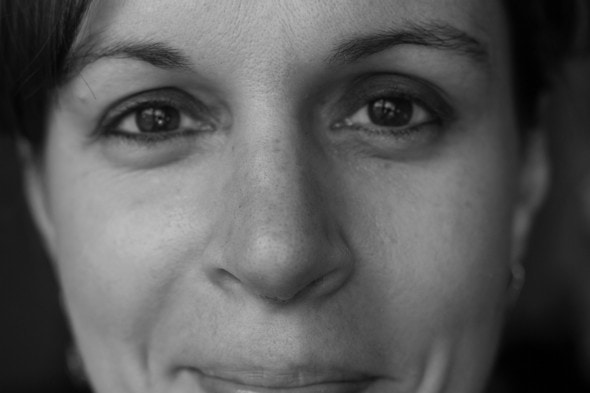 And my breathing was already better than before surgery, despite the swelling.

But I was sort of unprepared for how jarring it is to change something on your face.   Even though I knew the swelling was temporary, I still had a lot of, “ACK! WHAT HAVE I DONE TO MY FACE??” thoughts.

And I felt kind of depressed, which I discovered is rather common after facial surgery.

And the weeks after…

I got used to my nose bit by bit, and the swelling went down consistently, but slowly. 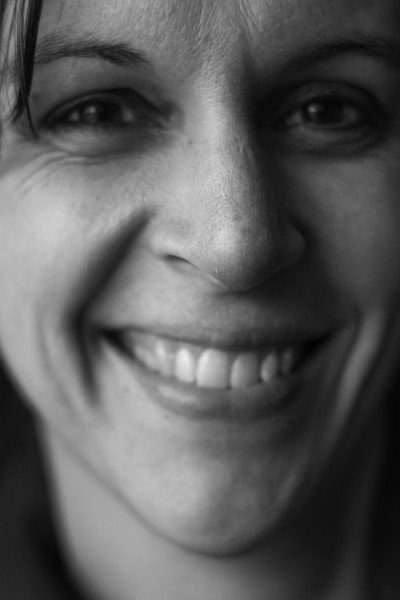 The most lingering effect was been a really stiff nose.

Until you can’t move your nose, you don’t realize how much you do! It’s hard to smile.   Or to rub your lips together to distribute lip balm.

And it’s just weird to have a nose that feels like it’s all made out of bone.

I’d say my nose was pretty consistently stiff until about 4 months post-surgery.   Since then, it’s gradually gotten softer. I can wrinkle it now, and I can depress the tip a bit.

And my nostrils are 100% normal and soft now.

My nose is supposed to continue to soften up over time, and I’ll probably still have a small reduction in swelling up to a year post-surgery.

While my nose doesn’t generally cause me any pain, it is still sensitive, and if it gets bumped, it hurts more than my pre-surgery nose did.   But I think that’ll keep improving over time. 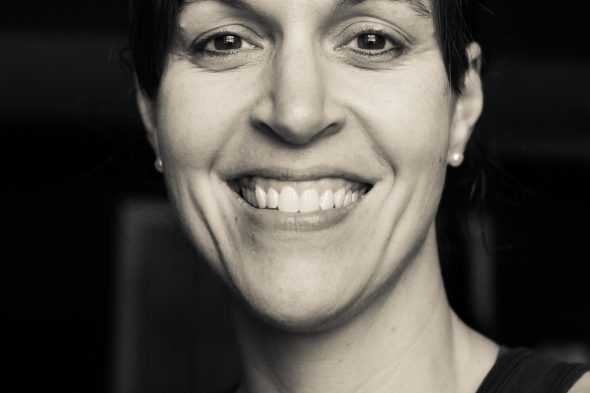 not a flattering angle, but you can see my current nose pretty well. So….

You guys, my breathing is fantastic.

And it’s been that way almost since I got my cast off and tubes out.   Such a huge improvement from before!

I almost never breathed through my nose before surgery because even if I was lying down, I’d get out of breath due to the low air flow.

But now I always breathe through my nose except when I’m doing intense exercise.

I always sleep with my mouth shut, and I don’t have any snoring issues.   And my mouth doesn’t get all dried out at night like it used to.

Would I do it again?

In a heartbeat, yes.   Even if my nose stayed exactly like it is now forever (a bit stiff and sensitive), I’d still do the surgery.

The improvement in breathing is just so dramatic and life-improving that the pain and recovery have been totally worth it.

(I feel the same way about my tonsillectomy.   That was a horrible recovery, and I still think it was worth it because of the vast improvement in my throat!) 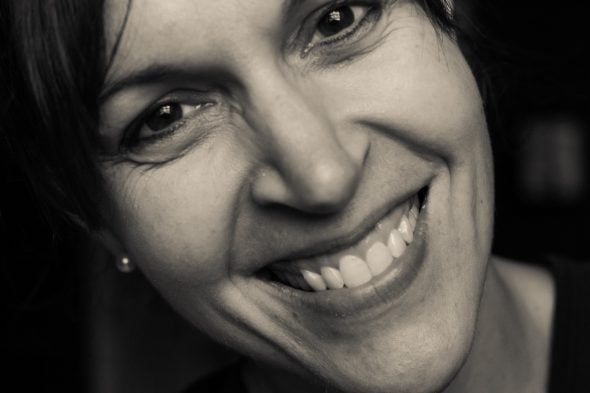 Current nose; out of focus because it’s hard to take selfies with an SLR!

My nose doesn’t look crazy different than it did before, but it’s still taking a little bit of adjusting for me.   I was so used to my old nose!   But the change is subtle, and the different in breathing is phenomenal.

I hope I covered what you wanted to know. But if you’re considering the surgery and have more specific questions, leave a comment or write me an email, and I’ll do my best to answer.

P.S. A lot of you have wondered about my nose piercing. It had to come out for surgery because my whole nose got rearranged, and the new insides and outsides don’t match up like before.   The outside hole closed up in a jiffy, so my nose looks just fine without the hoop. My surgeon says I can get it re-pierced again if I want in November, which will be a year post-op.

Hi Ivana! I used Google translate to read your comment. :)

Yes, for me it took a lot of months before my nose got soft enough for my smile to look normal. My nose was stiff for almost a whole year. It's quite soft now, though!

Hi There! I just got rhinoplasty a month ago and I'm freaking out and a bit depressed because my nose feels hard like a bone as you mentioned but mostly because I cant smile like a used to! did this happen to you? did it get better and if so when? Looking for some support.

Yes! That is exactly how it was for me too. I have a smile that wrinkles my nose up, under normal circumstance, so I could not smile at all like usual after my surgery. But my nose got softer over time, and my smile went back to normal.

Hang in there...it will not be like this forever!

When I smile my teeth don't show... and i look so unnatural. It makes me feel super insecure but my surgeon says its will come back, however i would rather have this convo with someone that experienced it.

I have had surgery mid September and my nose feels awkward; stiff, hard, (in) sensitive, like pegs on and up my nose. Can you tell me when your nose felt normal again?

That seems very normal to me; I'd say my nose felt oddly hard for a good year after surgery. It's slowly gotten better as time has gone on, and it's been basically back to normal flexibility for several years now.

Mine was sensitive at first too, and that gradually got better over the first year. At first, the inside of my nose felt very sensitive to cold air; like I didn't want to breathe through my nose in the outdoor winter air. That too has improved over time.

I had the same surgery twice; the first doctor was so conservative that five years later I went in for more and actually had turbinates removed. Over time your nose will definitely get back to feeling normal!

I read about your surgery when you originally covered it but it didn't apply to me(other than generating sympathy) so I forgot about it. This was a really timely and useful update because I had almost identical surgery 10 days ago. It is heart warming to see how well you are doing and knowing that it will be much better later. So happy for you! Not being able to breathe stinks. Thank you for sharing.

Yay! I hope you are breathing fabulously soon too.