So, I’ve made fish tacos before…in fact, I even posted the recipe here!

But as I was browsing through my ATK Best Mexican Recipes cookbook, I came across a grilled fish taco recipe that looked interesting. 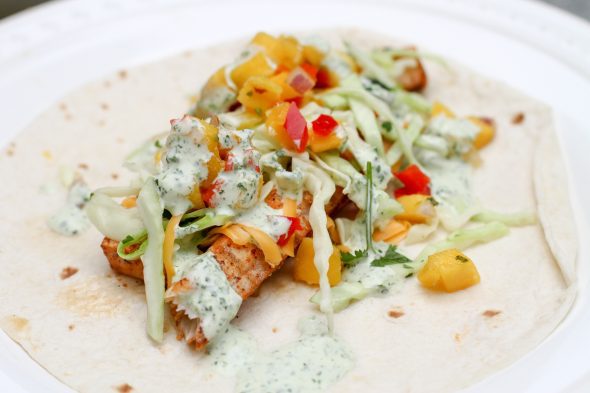 Mr. FG and I had had some similar tacos in April, except that they also had mango salsa and a lime/avocado cream sauce. 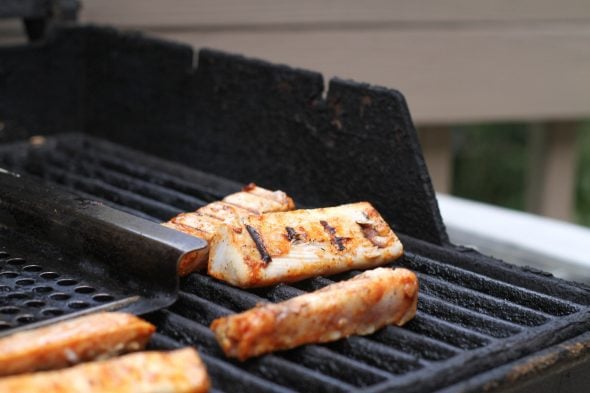 So, I tried the ATK grilled fish taco recipe (using mahi mahi), plus a cilantro-lime cabbage slaw from another ATK cookbook and a cream sauce recipe from the interwebs. 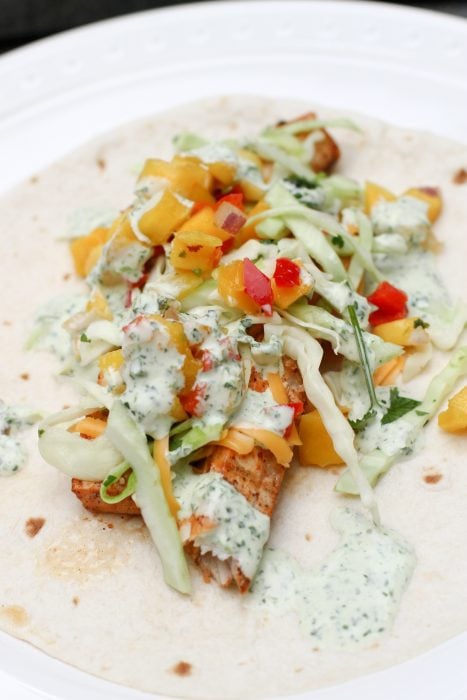 This met with approval from everyone in my family except for Joshua, who just isn’t a big fan of Tex-Mex food in general.

So, it’s not that he thought it was bad Tex-Mex, it’s that he doesn’t really love even super good Tex-Mex!

I’ll probably just make this on nights when he’s got an evening shift at work. 😉

I am super pleased that the cabbage slaw met with most everyone’s approval because when cabbages arrive in my produce box, I’m usually at a loss because my family doesn’t love cabbage.

But in fish tacos, we all think it’s pretty good. Yay!

You may remember that last week, I was considering doing a grilled whole chicken recipe from my Mexican cookbook, but that got derailed this week.

Soo, maybe I’ll do that as my new recipe this week.

Any new kitchen adventures this week?

I have rediscovered Japanese cabbage pancakes. Using shredded cabbage and something similar to a pancake batter you can make a tasty, nutritious base for what becomes something like a pizza; you can top them with all sorts of things.

I made a salad with grilled chicken, mushrooms and onions over a bed of fresh greens with avocado and a simple dressing of olive oil and apple cider vinegar. It was yummy!

Have you tried using your cabbage in a stir-fry? It works just as well as bok choy and it's much cheaper. Plus, once it's cooked and covered with whatever yummy sauce you're using for your stir fry - it looses the cabbage taste that non-cabbage lovers seem to object to. It's also good in egg foo young or just sautÃ©ed in butter... um... can you tell I actually LOVE cabbage? :-)

I haven't! I made a cabbage stir fry recently with Chinese cabbage, but I didn't know you could just use regular cabbage instead. I'll have to try that.

I love reading about people's recipes. I never know which one of my kids will eat what now that they are older. I have one who would love the fish tacos but sadly that is a dish way out of my price range. On the other hand, I did use a head of cabbage I bought from a discounted pile on the mark down shelf. I made a stuffed cabbage casserole. The kids loved it. I found 12 lbs of ground sirloin marked down to 2 dollars a pound. Those tacos are very appealing though. I may keep that in mind when there are only the two of us home. I looked at avocados today. 2.00 a piece. I think a trip to Aldi s is needed.

I'm so proud of you for pulling different recipes together to create a "theme" dinner! Sometimes that can be a challenge, but the results for us are usually pretty stellar. We have had a crazy week with baby sleep schedule changes, travel and house construction to fix a leak :'( so we didn't try anthing new. Hubs did make really good pork chops last night and I made guacamole even though we felt like eating out. Frugal win!