I see people on the interwebs who spend days prepping for elaborate themed parties, and while I am in awe, it’s sort of hard for me to fathom. 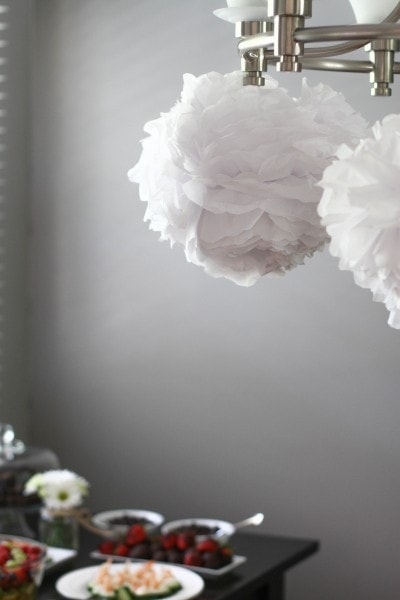 I think some people do that sort of thing because they just love every minute of it, and I totally respect that.

But that doesn’t seem to be where my particular gifting lies.

The good news is that, as it turns out, I can actually put together a functional gathering, so, yay!

My cousin is getting married soon, and so I threw a bridal shower for her last weekend. 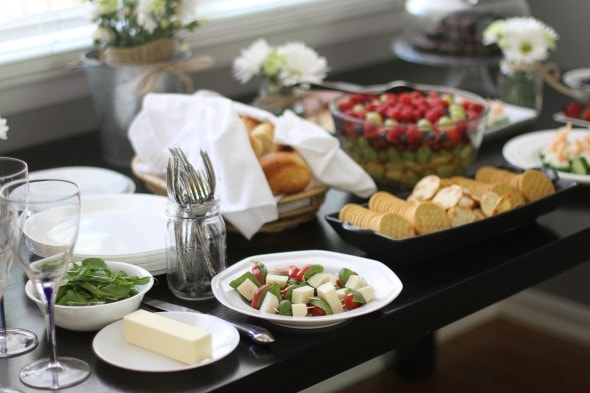 However, with both showers I’ve hosted, I’ve had decorating help from friends because party decorating is really where I’m not gifted.

This time around, a friend put together some sweet little daisy flower arrangements, which were both beautiful and simple. 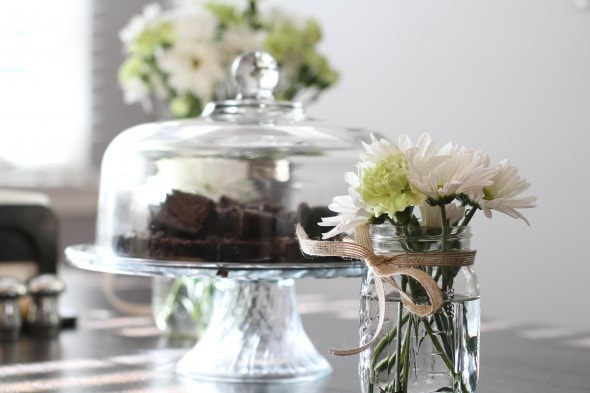 And she and my girls made some white tissue paper flowers to hang on my dining room light. 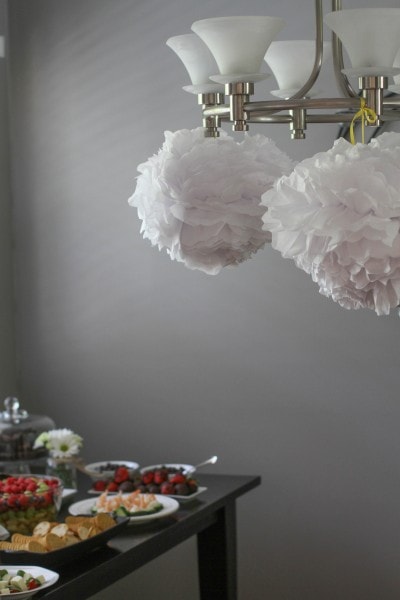 These are not only for decoration…they also serve as a, “HEY.   There’s a light fixture here! Don’t bump your head.” warning, because once we scoot our table away from the light, it’s really easy to bump your head as you walk by.

I made a lot of the same foods that I did for the baby shower I hosted last year, although I also added a ham/cheese platter and a basket of honey-glazed rolls. 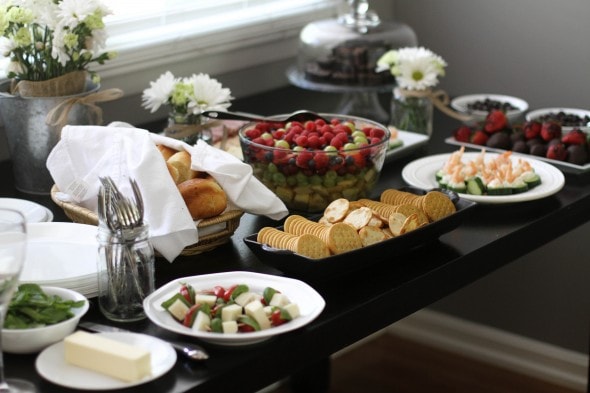 And like last year, most of the food I served came from Aldi.

(My cousin happens to be an Aldi shopper too, actually!)

I considered using disposable plates and cups, but then thought better of it.   This was a fairly small shower (less than 20 people), so I knew I had enough dishes to allow me to use non-disposable everything. 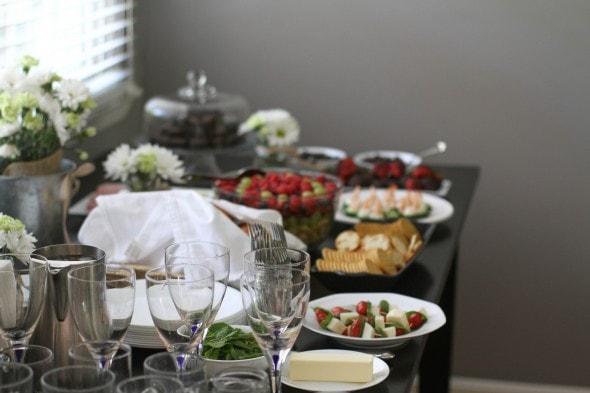 Except napkins.   I don’t have nearly enough cloth napkins for a party!

This was partially driven by my desire to avoid trash production, but honestly, it was more about the fact that disposable tableware just isn’t as lovely to use.

(Life with sturdy, non-disposable things is nicer, after all.)

I just used plain white Corelle-ware plates plus a mish-mash of drinking glasses and wine glasses. 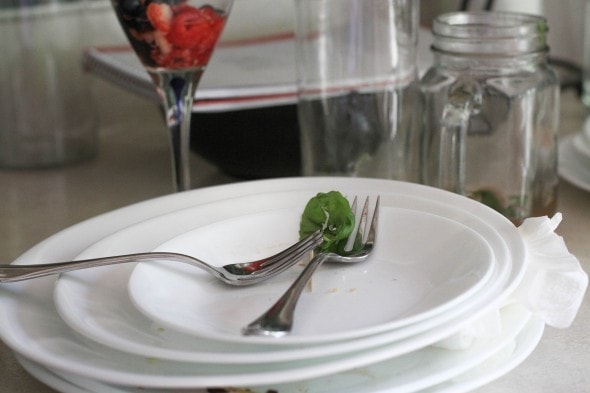 Most of what I served was finger food, so I just put out a mason jar with forks.   Real flatware is so much more fabulous than the plastic sort, and it’s super easy to throw in the dishwasher.

So, even when I’ve used paper plates in the past, I still have always put out real silverware.

I wondered if all of this might make party cleanup a little laborious, but it was super quick and easy.   I just put almost everything in the dishwasher and was finished with all of the party cleanup in about 45 minutes. 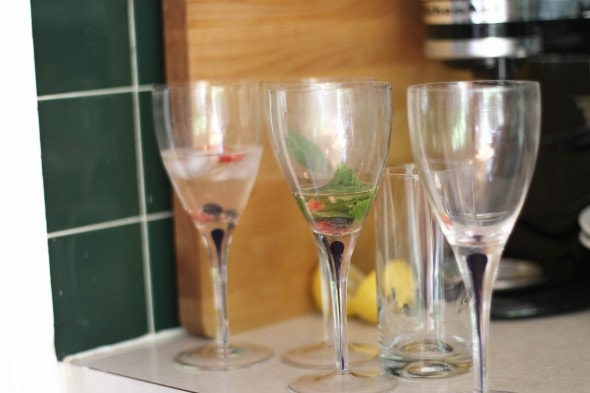 You know what always surprises me when I host a gathering?

That it doesn’t have to be perfect to bless someone.

My house is not enormous.

I’m not an experienced party-thrower.

My carpet is old (Though we’re gonna fix that this week!)

I pretty much never prepare a super elaborate menu.

Yet whenever we host gatherings here, everyone seems to feel welcome and happy, they have a good time, and there always is enough space, somehow.

That makes my heart happy.

And really, I should remember that next time I’m having a bout of party inadequacy.   😉

Just so ya know, this wasn’t sponsored by Aldi in any way.   I’m just a big ol’ fan, and I love that by shopping there, you can make a beautiful, delicious, party-worthy spread without breaking the bank.

Much of what I made requires no recipe (fruit salad, cheese plate, cracker tray, etc.), but here are links to some of the recipes I used.

I have had trouble finding good quality and long lasting flatware. What kind of flatware do you use? I love your blog by the way; your advice is always so practical. Thanks!

I have Oneida flatware that I registered for when I was getting married. That was back in 1997, so its held up quite well. Mine isn't crazy top of the line...probably a middle grade.

It all looks lovely! I'm not a big party planner, either, but have enjoyed the few parties I've thrown. Personally, I think people are just thrilled that you thought of them (i.e., if it's a shower, birthday party, personal celebration of some kind), and they just want to spend time with you and other friends and/or family. My house is far from perfect, and I try and make it as welcoming as I can when we have company - but I suspect no one really cares about the imperfections as much as I do.;-)

I experience party inadequacy every time I throw a party! I'm glad I know what it's called now. :)

I inherited, from my mother-in-law, an entire china cabinet of Fostoria "American" pattern, which is clear. Goes with any color scheme! I use these plates and glasses for smaller showers and for desserts, etc. also a bunch of the serving pieces. I'm lucky I know! Plus I also have all of her milk glass, which I use less often ( mainly platters, cake stands and punch bowl) I love planning and hosting showers, my problem is reining myself in and not going too over the top. I set a budget at the outset and do my best to stick to it. Aldi helps immensely.

I'm not sure why, but I absolutely HATE paper plates. Growing up, I remember my family using them quite a bit, but I never ventured there. We have them, but I think we've had these for years on years. Mostly because my Mom insists on using them. I'd rather wash! Same with flatware. Same with napkins, really, but we DO end up using paper. Until recently due to some changes in our lives, we used dish towels that matched our house as napkins. We would use them for a bit and then wash. I just kept them in the drawer with the other towels and it was no issue. And believe it or not, they always were pretty clean. Anyways, long paragraph to say, I think it's fab you used the real stuff. I think that is what makes a party feel more special. :)