What, you ask, is a bench knife?

This is a bench knife. 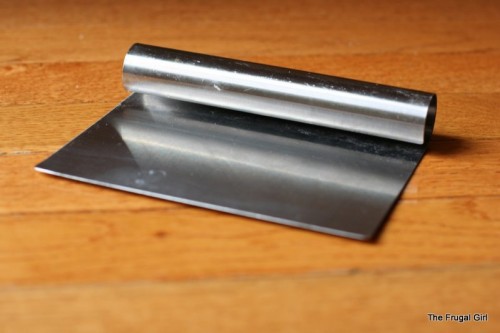 How do you use a bench knife?

It’s not exactly a knife, although some people do use it to cut bread dough. It also goes by the name “dough scraper”, which more aptly describes the way I use it. You know that thin layer of dough that gets left on your counter after you knead? I use my bench knife to loosen that and also to scrape those bits neatly into the trash can.

Mine also gets a lot of use during the early stages of kneading, especially if I’m dealing with an enormous pile of bread dough.

Basically, it functions as a really wide, stiff hand that won’t stick to soft bread dough. You can see me using one in that way here.

What else is it useful for?

Use to cut baked goods

You can use a bench knife to cut granola bars, brownies, and all their cousins.

When you’re cutting your baked goods in the pan, it’s much easier to use than a chef’s knife, since it doesn’t have a long handle (long handles tend to bump into the edges of the pan, making it impossible to cut all the way through to the bottom of your bars).

Use to remove baked goods from pans

A bench knife is good for liberating granola bars (or brownies, or anything similar) from their pan…just methodically push the bench knife between the glass and granola bars.

Once that’s done, and the bars are cut, you can use the bench knife to get that difficult first row of bars out. It’s like having a really wide spatula.

Use to clean up spills

I just remembered one other way I use my bench knife…to clean up spills. Sometimes I drop an egg on the counter, and I can just slide the bench knife right under the egg to lift it up and add it to whatever I’m making (assuming my counter was clean!). I do the same thing whenever something goopy gets spilled onto the floor. The bench knife makes it easy to scoop up most of the mess, leaving just a bit for me to wipe with a washcloth.

The best thing about one of these handy-dandy items is that it’s not going to make you part with much of your cash.

Mine was less than $10, and I’ve been using it since I got married, which was almost 12 years ago.

This all-metal dough scraper is less than $10 and it even has ruler markings.

And if you want a cushioned handle, here’s a good option by Good Grips.

So, if you’re even an occasional baker, go get yourself one of these. You won’t regret it.

I use plastic cards (like bank cards and such, from my wallet) as a bench scraper, a knife to cut the dough, spoons to scrape the bowls and so on. But I do cook and bake for one, so, yes, for bigger batches it maybe wouldnt work. But I really like to own as little of things and stuff as possible :-)

@Kristen KRISTEN thank you! I don't have a big issue but didn't know if lots of flour bags would attract anything I didn't want to attract! Going first thing tomorrow to see if they have any of this exceptional flour at a frugalista's price!

Kristen A semi-stiff drywall 5-6" knife works great and at 3-4$ a great bargain too ( found at you local home inprovement center) I enjoy your blog, i have used several of your great tips.

I have been thinking about how to get a bench knife since I started baking a couple of months ago. Making pizza dough last week clinched it though. I really want one. It's not an easy tool to find used though. This might just cause a break in my Compact! P.S. Thanks in part to the inspiration of your blog we went through 5 pounds of flour in one week. That was (the new) weekly pizza night, 4 dozen homemade oatmeal chocolate chip cookies and I think I got a loaf of bread in there!