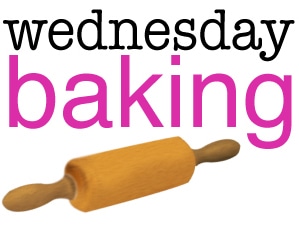 Somehow, I thought today was Thursday. I sat down with several post ideas milling about in my brain, and then I realized that today is Wednesday. And that I promised to share the new coffeecake recipe with you.

This recipe has been in my to-try pile for a while, but I just haven’t gotten around to making it. Lisey spied it, though, and decided she’d like to have this for her birthday breakfast. 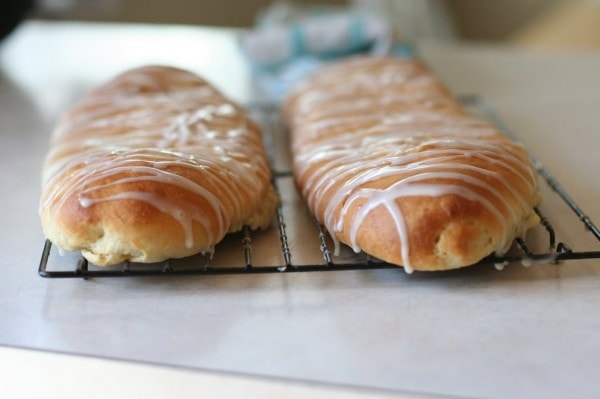 This is not an overnight kind of recipe, which is a bit of a bummer, considering it’s best to eat it at breakfast. On the other hand, I do think that cream cheese filling is probably more tasty when it’s cool, so it might be best to make the day before after all.

I may do some experimenting, though.

Ok! To make the dough, dissolve the yeast in the warm water. 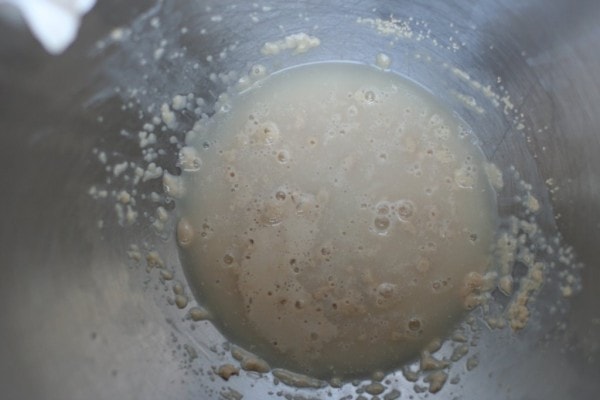 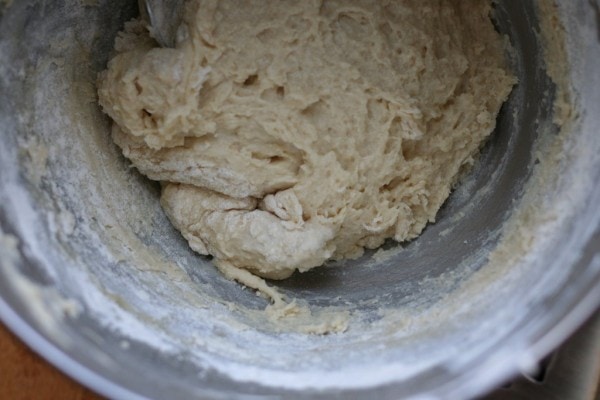 Turn out onto a floured surface and knead about 20 times, just enough to make the dough smooth. 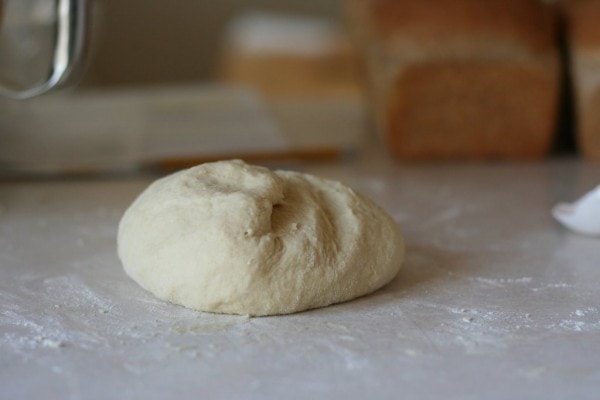 Place the dough into a bowl, cover with a wet tea towel, and let rise for 1 hour and 15 minutes. 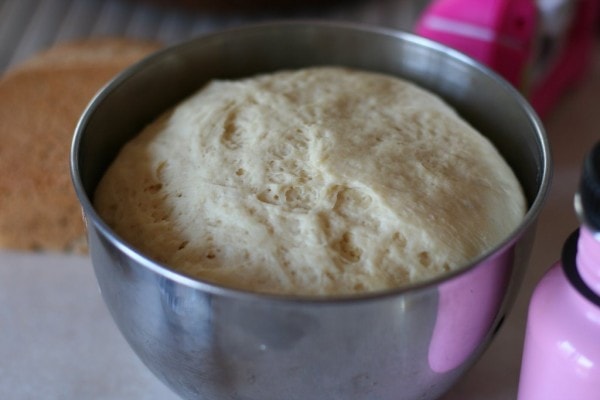 Punch the dough down, divide in half, and roll each half into a 12×8 inch rectangle. 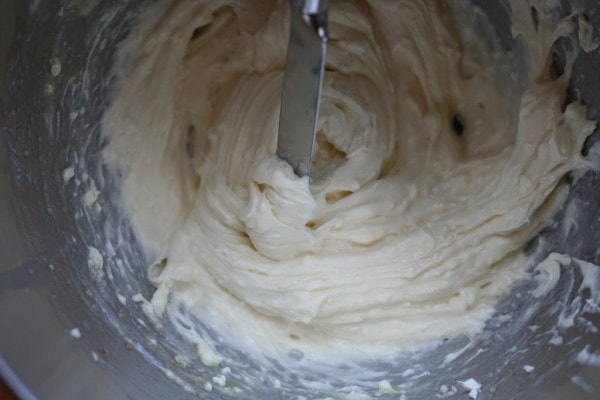 Also, you’ll need 1/2 cup of raspberry jam for the filling. I used jam from Aldi, since my homemade raspberry freezer is sadly all gone. 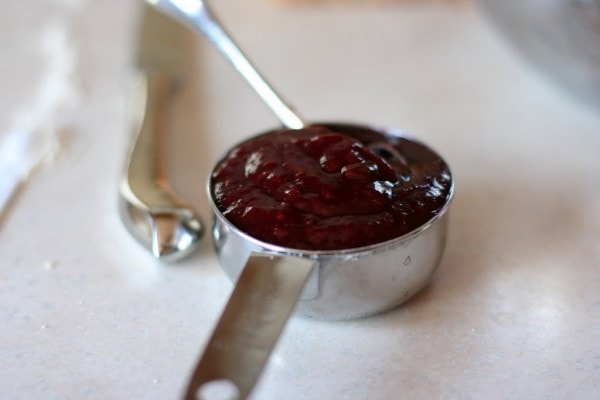 Spread cream cheese mixture over each dough half to within 1/2 inch of the edge. Spread raspberry jam over half of the filling. 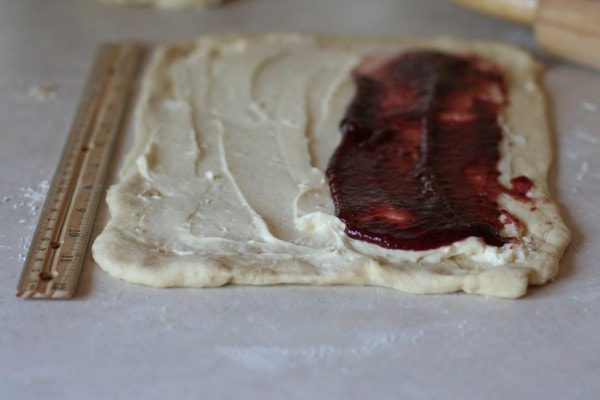 Yup, I do actually measure the dough with a ruler when I’m making a recipe for the first time. I majorly stink at estimating!

Carefully roll the dough up lengthwise. To seal the seam at the bottom, I like to brush the dough with a bit of water. It works a lot better than pinching the seam. 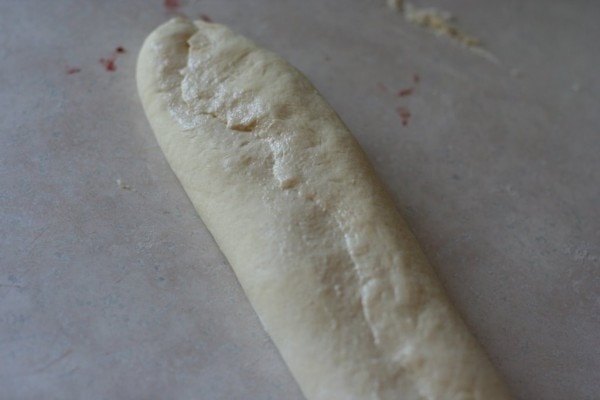 Place the dough rolls, seam side down, on a greased baking sheet. (‘scuse the blurry picture. I had a focusing fail.) 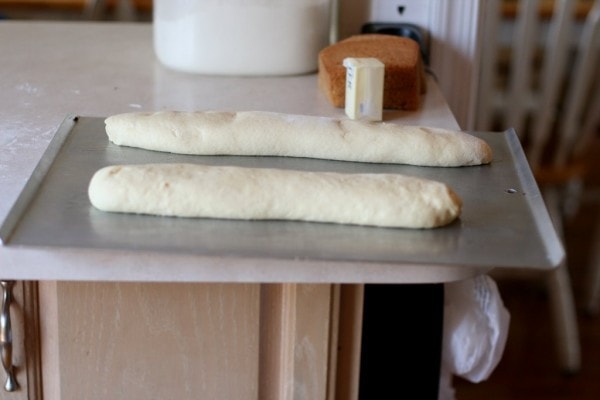 Cover and let rise 30 minutes. Using a sharp knife, cut several small slashes across the top of the dough. 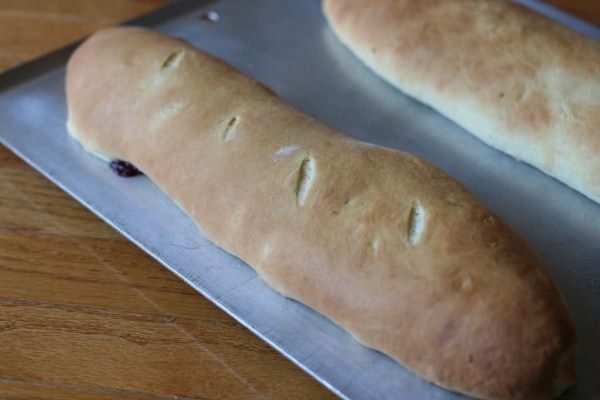 Remove from the pan (I use two spatulas to do this) and place on a wire rack to cool. Incidentally, some of the filling leaked from my rolls, but it wasn’t a huge problem, and the coffeecakes were still delicious.

To make these more beautiful, you really should add the glaze, which is made from powdered sugar, vanilla, and milk. 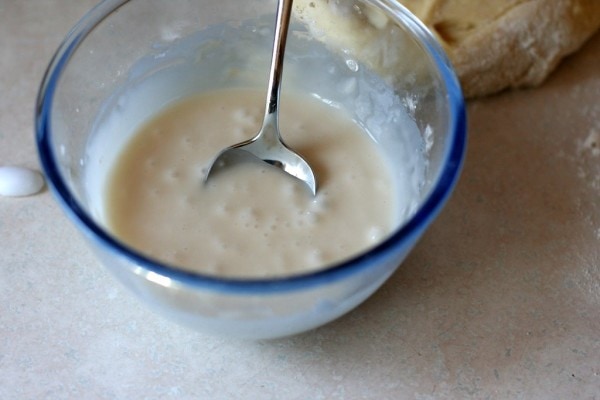 Drizzle the glaze over the tops of the coffeecakes. 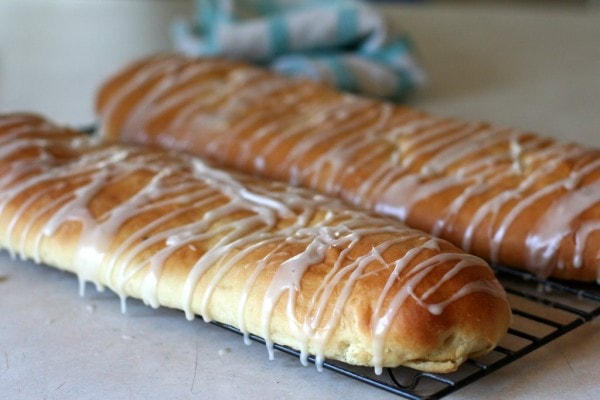 It’s wise to place the rack on top of the baking sheet to catch glaze spillage, because glazing is a messy business. 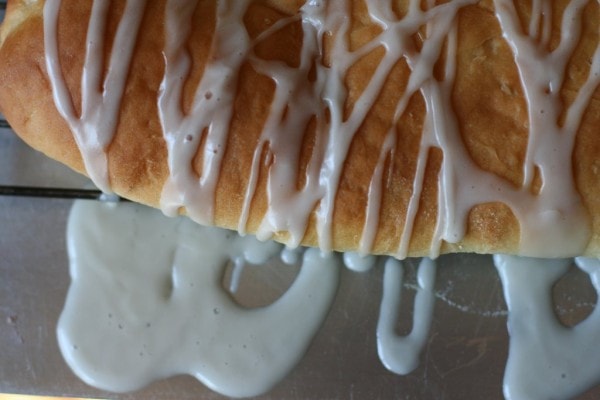 If you’re planning to eat the coffeecakes the next day, I’d recommend waiting to apply the glaze, as it tends to get sticky if it sits overnight.

At least, mine did. And that may have been caused by me storing the loaves in the fridge overnight. I’m not positive that was necessary, but given that they have cream cheese filling, I didn’t think leaving them out overnight was a good idea. What do you guys think?

Oh, did you want to see the inside? 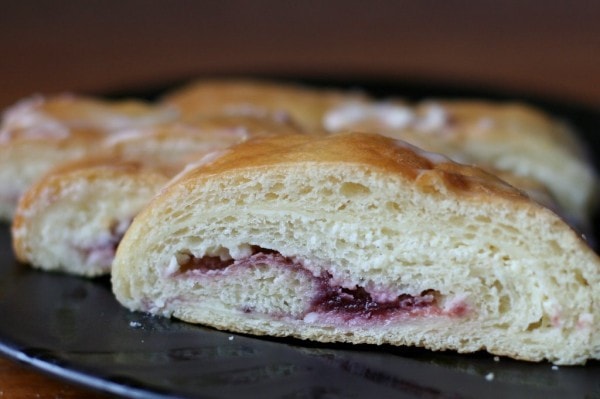 The kids and I thought that this recipe was super delicious, and if you love a cream cheese/raspberry combination, I’m quite sure you’ll be in love after the first bite.

Normally I type up the recipe here in the post, but I’m running kinda late this morning, so I’m going to be lazy and simply refer you to the recipe on Taste of Home’s site. Oddly enough, though, the dough mixing directions online are different than the mixing directions in the printed recipe I used from the magazine. So, I can’t vouch for how well the recipe works that way, as I mixed it up in the way described above (I added the sour cream, egg, butter, sugar, and salt together, and then the flour).

Thank you for posting this! I made it today and it was extremely delicious. I used the "recipe" from the link you posted and followed your directions, but mine never looked anything like your pictures. It also seemed that I had about 3 times as much filling as I needed, even though I followed the recipe. Curious - do you usually have leftover filling? I think I should have used a lot less to keep it from spilling out everywhere. Just curious what I might have done differently. Thanks for all the baking tips and tricks. :-)

Huh. I don't remember having extra filling. I haven't made it in a while, but I'll pay attention next time I do!

I made this today...I don't know how you kept it all in when you rolled it. THe first one was a big mess but when I made the second one I used half of the half of filling and left a good inch to seal it and it still squished out. YUMMY but kinda messy. Hubby is taking this to work tomorrow to feed his peeps.

Raspberry danish is my most favorite to purchase so if I can now MAKE it - I'm SO loving it! Thanks for sharing this; can't wait to try!

I am savoring the thought of the aroma in the kitchen while baking this masterpiece and the joy on Lisey's face as everyone shares the joy of a homemade delight for breakfast together!!! That sounds like an impossible dream!! But it is real!!! Thanks for the moment!!!!

Thanks for sharing and taking the time to post all that. Looks heavenly... Can't wait to try it.