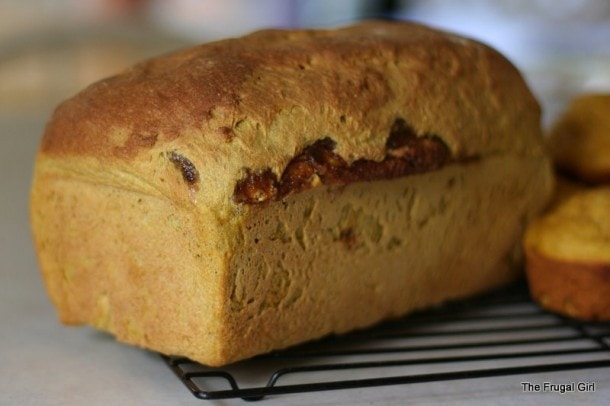 Probably 99% of pumpkin bread recipes are the quick bread sort, that rely on baking powder or baking soda for their rising. I do love a good pumpkin quick bread, but sometimes it’s kind of fun to make a pumpkin yeast bread.

Pumpkin is wet and heavy and inhibits rising, so this recipe doesn’t use as much pumpkin per loaf as quick bread recipes do. The same goes for butter/oil…since fat gets in the way of yeast growth, pumpkin yeast bread requires far less butter or oil. This bread is also not as sweet as pumpkin quick bread. Because of this, I like to put a cinnamon swirl in my loaves, though of course you can bake it without the swirl if you prefer.

Here’s how to make the cinnamon swirl version. Incidentally, I was out of raisins when I made this loaf, which is why they are not in the pictures.

Combine the flour and the spices in a mixer bowl. 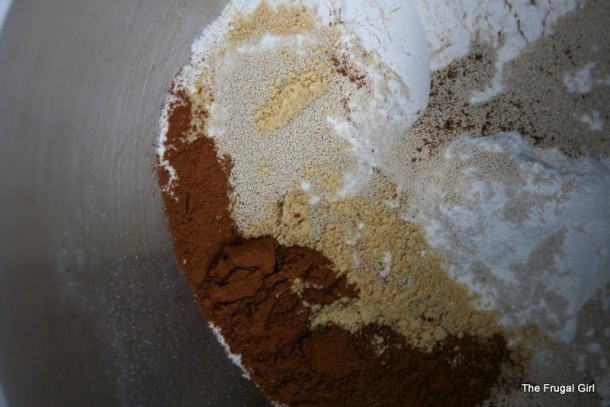 Heat the milk, brown sugar, and butter together. 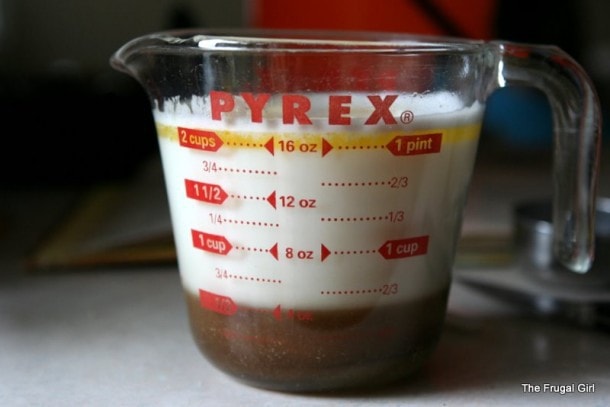 Add the liquids to the dry ingredients, and mix until combined. Add the pumpkin. 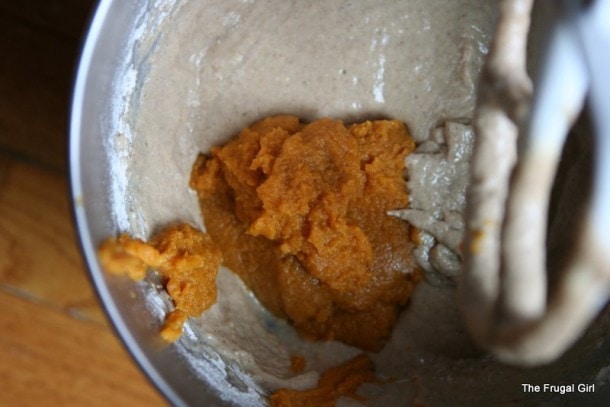 Which will give you a funny looking orange-ish bread dough. 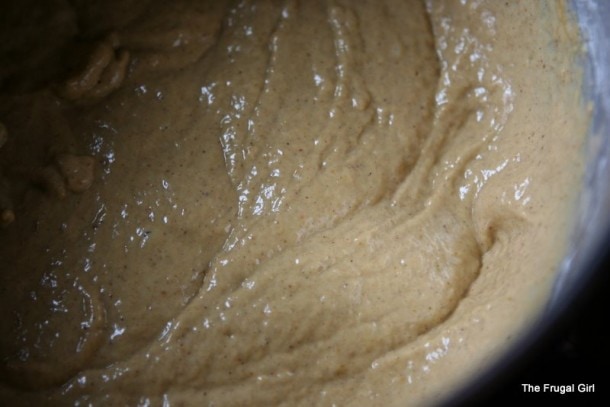 Beat for 3 minutes, then add raisins (if you have them!) and enough flour to make soft dough. 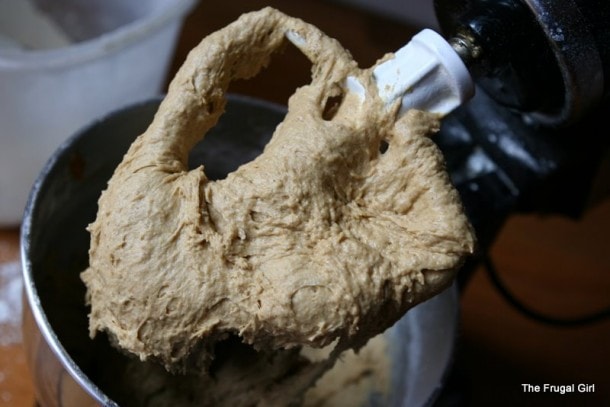 Turn out onto a floured surface and knead for 3-5 minutes, or until smooth and elastic. Cover and let rise for one hour. 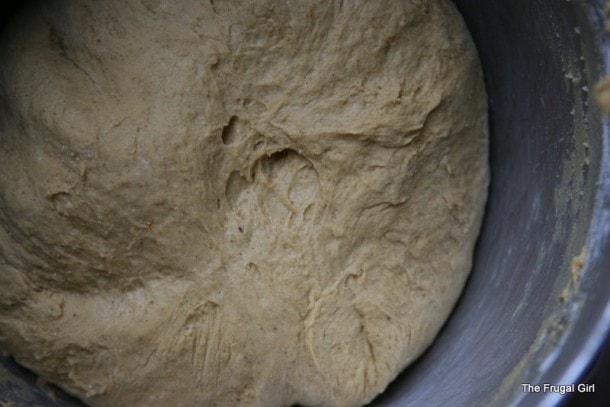 Punch dough down, divide in half, and roll each half out into a rectangle. Brush each rectangle with water, and sprinkle with cinnamon and sugar. 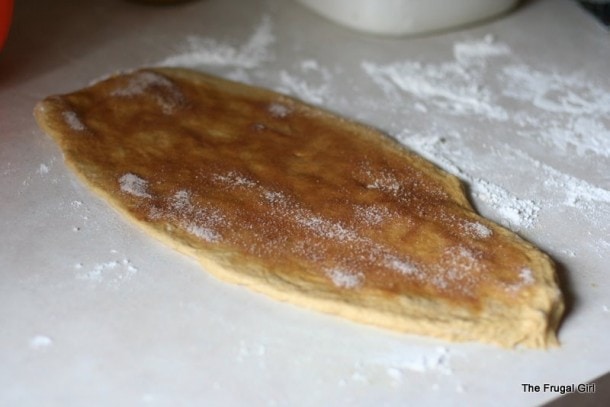 Roll up jelly roll style, starting from the short end. Place in a loaf pan, cover, and let rise one hour. Bake at 350 for 30-35 minutes. Since this bread is fairly dense and heavy, err on the long side of baking.

My children think this is delicious toasted and buttered for breakfast. 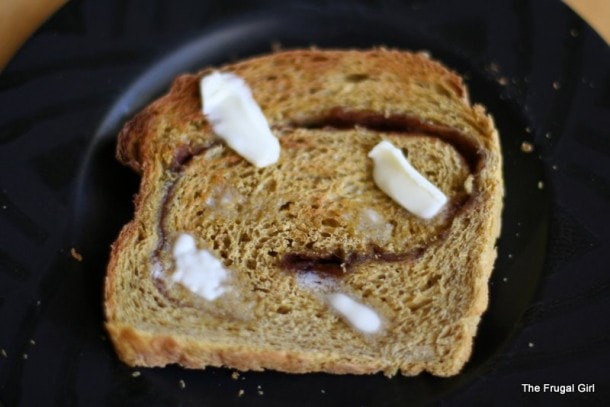 Of course, most things that are toasted and buttered are pretty delicious. 😉

In large mixer bowl, combine 1 1/2 cups flour, the yeast, and the spices.

Add to dry mixture in mixer bowl; mix until combined. Mix in pumpkin, and beat for 3 minutes on medium speed.

Add raisins, if using, and enough flour to make a soft dough. Turn out onto a floured surface and knead for 3-5 minutes, adding more flour as necessary. Place in bowl, cover, and let rise for 1 hour.

Punch dough down, and roll out into a rectangle. Brush lightly with water and sprinkle with cinnamon sugar
(3 tablespoons sugar and 1 teaspoon cinnamon).

Starting from short end, roll up jelly-roll style and place in a greased 8×4 inch loaf pan. Cover; let rise until double (about 35-45 minutes).

Hello, I've made your whole wheat and flour sandwich bread and they turned out great! I tried to make this bread without the pumpkin (just regular cinnamon raisin bread) and it did not turn out. It didn't rise, it was hard to mix the raisins in, it was just an overall mess. Should I have done something different (or added sonething) to make this simply cinnamon raisin bread? Thanks!

The problem was likely that the dough didn't have enough moisture, due to the lack of pumpkin (the pumpkin makes this dough pretty wet!)

To make cinnamon bread, try this, but add raisins to the cinnamon swirl: https://www.thefrugalgirl.com/2010/02/wednesday-baking-oatmeal-cinnamon-bread/

I love you blog :) I just made the pumpkin cinnamon bread and I have a question. The recipe indicates 31/2 cups flour but 1 1/2 cups is indicated later in the recipe (by your gorgeous photos) I used 3 1/2 and it seems to work--both loaves are rising now--just wondering which is correct.

Just finished mixing up this bread and am now waiting for it to raise. I can't wait till I can taste it. I have been devouring your site the last 2 days, after seeing the piece on 700 club. I have always been frugal and am always looking for ways to save. I am a on again off again baker. ;) Your recipes have inspired me to have a baking day today! So far it has been your sandwich bread and Cinnamon Rasin Swirl bread. Next will be the zucchini bread. After I go grocery shopping granola and granola bars will be next!

Tip for those without a mixer...I don't have a mixer either and use a very large wide topped bowl to mix my breads in. When the dough gets too stiff to mix with the spoon I begin kneading the flour into the dough right in the bowl. No extra mess on the counter! I just keep kneading till I have a nice smooth elastic dough. Thanks again for such a great blog!

Yum! I made this last night and it was delicious! I think next time I'll up the cinnamon in the cinnamon sugar mixture to 2 tsp instead of 1 tsp. I used the extra canned pumpkin to make a pumpkin apple quick bread, but after eating some of this, I wished I'd just doubled (or tripled!) this recipe.