Food Waste Friday is over at Simply Being Mum’s today, but since I missed last week due to Black Friday, I thought I’d just put up a small food waste update.

As you read earlier this week, I had some leftover mashed potatoes to deal with after Thanksgiving.   I’m not a huge fan of reheated mashed potatoes, so I usually try to come up with some other way to finish them off.

I did eat a big bowl of them topped with gravy and leftover roasted Cornish game hen, and Sonia ate some reheated, but I still had more left.

So, I made potato bread. 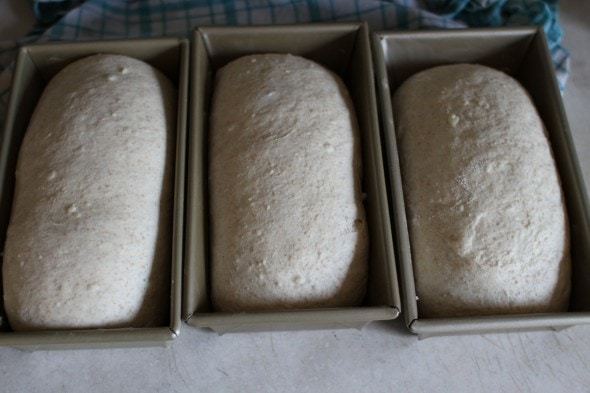 You guys, every time I make this, I wonder why I don’t do it more often, because potato bread is so lovely and soft.   In fact, it’s so soft, it takes a little bit of effort to carefully get it out of the pan after baking. 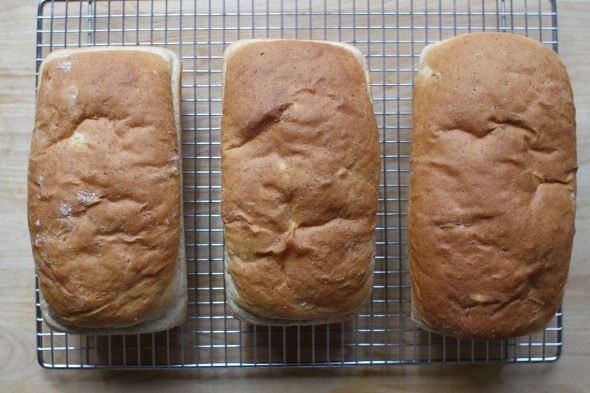 We might have eaten an entire loaf at lunch yesterday.

So, I am resolved to make potato bread happen more often, especially if I have potatoes to use up.

And potatoes that have a lot of butter, cream, or cheese added to them shouldn’t be a problem either.   Generally speaking, you don’t want to overload yeast dough with fatty ingredients (that can inhibit rising), but the potato bread dough has so little fat to begin with, and the potatoes make up a fairly small proportion of the dough, so even super decadent mashed potatoes don’t usually pose a problem.

I might pause if you’d added something like garlic or bacon to the potatoes, but then again, if you wouldn’t mind having a slight garlic or bacon favor to your bread, carry on!

I also used up the leftover pumpkin, but before we get to that, I need to tell you that we decorated our tree. 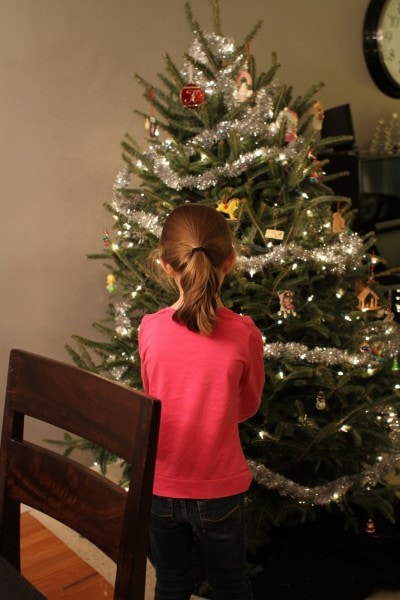 Why is this significant? 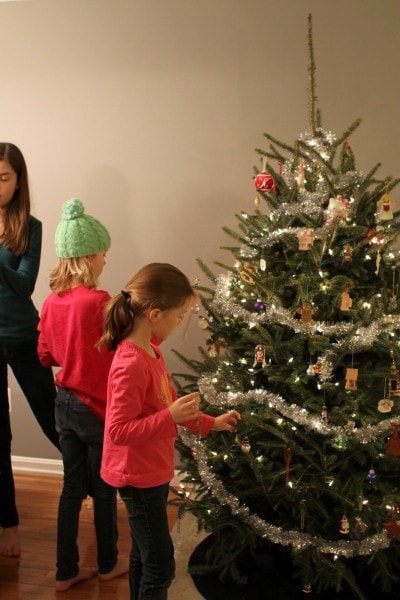 Well, it means that in every photo I take between now and January 1st, I will purposely position myself in a way that optimizes my chances of catching Christmas light bokeh in the background. 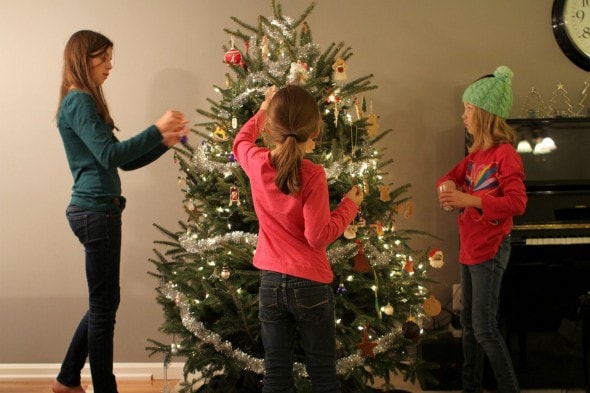 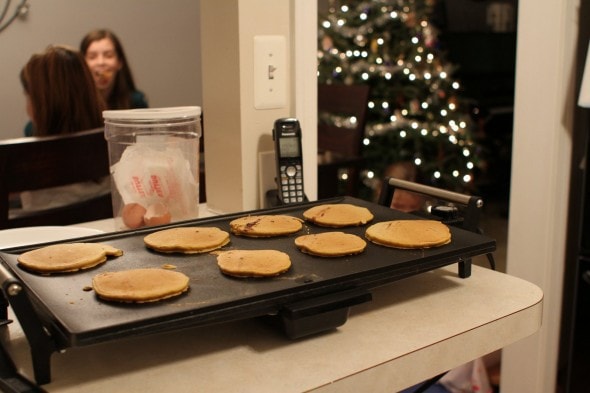 It will probably even happen with food waste photos.

Actually, the real point of that photo is to say that the extra canned pumpkin turned into pumpkin pancakes.

I used our leftover Thanksgiving meat and leftover gravy by making extra gravy and then pouring it over toast for dinner.

(A UK reader wrote to ask if we really do put this on toast, since she thought that sounded gross.   And then she told me that she likes to put baked beans on toast, which sounds really unappetizing to me.   So funny.)

Basically, all I have left from Thanksgiving is a little bit of gravy and some cranberry sauce, which I think I might freeze for future use.

What other food waste news do I have?

I did a super-de-duperly-detailed fridge cleanout yesterday.

(I washed the shelves, even! I kind of feel like I might need a prize for that.)

But for some reason unknown to mankind, I neglected to take a photo of what I threw out.

I know there was a moldy orange or two, a serving size of crazy old fruit salad (how did it get behind the pickles????), and a small old piece of chicken.

I feel like there was something else, but cannot for the life of me remember.

I should have taken a picture.

My fridge is nearly sparkling in a literal sense at the moment and I am filled with hope and optimism that I will keep it that way.

(We all know I won’t, but let’s not talk about that right now.)

If you have food waste tales to tell, go visit Simply Being Mum.

Do pop back in this afternoon because I am doing a giveaway of Third Day Natural products, which are blow-your-hair-back awesome and also utterly natural and you really should have them in your life (and possibly in your stocking).

Especially the lip balm.   You might not know this, but I’m the president of the Third Day Naturals Lip Balm Fan Club. 😉

Anyway.   Come back this afternoon to win lip balm, soap, sugar scrub, and more, and also to get a special coupon code just for FG readers.

Baked beans and toast is such a tasty nutritious cheap meal...use the vegetarian supermarket canned beans not US 'pork and beans' and also I sometimes make cheese on toast topped with the vegetarian baked beans.

( I'm English before American! we grew up on this also jam or honey or 'dripping' on toast- the solidified cooled renderings from cooking beef )

One of the best ways to use up leftover mash or leftover roast dinners- Bubble and Squeak. Cabbage is always cheap here and a little goes a long way. It's basically the leftovers chopped ( boil the cabbage for 10 or 15 minutes and drain if it's a later addition ) and fry it in a pan with a little oil or bacon fat. A version simple is chop and fry bacon, add the mash and cooked cabbage and fry for 10-15 minutes keep turning it over. It's delicious with a bit of black pepper. Filling nutritious and uses up leftovers, it was our traditional way of using up leftover 'Sunday dinner' when I grew up in the UK. Name comes from the sounds the mixture makes when fried.

It's no longer cheap in the US but canned corned beef- traditionally coming from Argentina- mashed with potatoes and butter and milk also makes a tasty meal served with the vegetarian baked beans.

In my local Kroger supermarket their brand vegetarian baked beans are @60c a 425 can, the corned beef their brand @ $4 a can. Make sure there's a 'key' attached to the canned meat or it's difficult to open! 3lb potatoes mashed with one can corned beef served with 1 or 2 cans baked beans feeds 4-6 so even if it's not frugal it's @ $1.25 per person. I mash it and then bake it so the top gets a little crust.

Sometimes I buy the store brand or Hellman's tartar sauce and there's some to be used up. Mashed potato, pink salmon and the tartar sauce make good fishcakes, baked or fried.

Finally for mash- the easiest tastiest meal ever is the cottage pie: small chop an onion and fry it a little, add minced beef then make a brown gravy; empty into a baking dish and top with mashed potato, bake until the top makes a browned crust ( @ 20 minutes on 400 ) So simple, and people do lots of variations adding in things they want to use up. I serve it with boiled carrots and mint sauce ( chopped fresh mint which my neighbor grows and gives me free in a mix of vinegar/water/sugar )

I wound up just eating my mashed potatoes. No breads, rolls, shepherd's pie etc. necessary. Actually, I got so into my cranberry sauce leftovers that I wound up making a new batch of cranberry sauce to put in my yogurt. Yum!

Good for you! I'll have to try the cranberry sauce on yogurt, as I have a fair amount still left.

My photos have never been your standard - but lately they have been borderline embarrassing. I've switched PC's and have not put the DSLR software on my laptop. So lazy! Need to get on this - particularly as I had two new lenses this year, which have seen very little action! Love the bread and love the tree!

Ooh, what lenses did you get??

Hi! I have been following your blog for about a year now(maybe more!) and this is actually my very first comment :) As a college student, your advice has been awesome! I just had to say that Potato Bread looks delish! And I am for sure going to try that Pumpkin Pancake recipe!

I saw a recipe a while back and seems like it used mashed potatoes in a casserole similar to twice baked potatoes- added sour cream, cheese, chives, bacon but instead of restuffing the skins they spread it out and baked. also like them on shepherds pie though I've read that my version with ground beef isn't 'shepherd's' but I still call it that! I also read that heat better in the microwave if you make a hole in the center of the pile- I tried it over Thanksgiving and it seemed to help..I hate unevenly heated taters