that our power stayed on during the cold snap 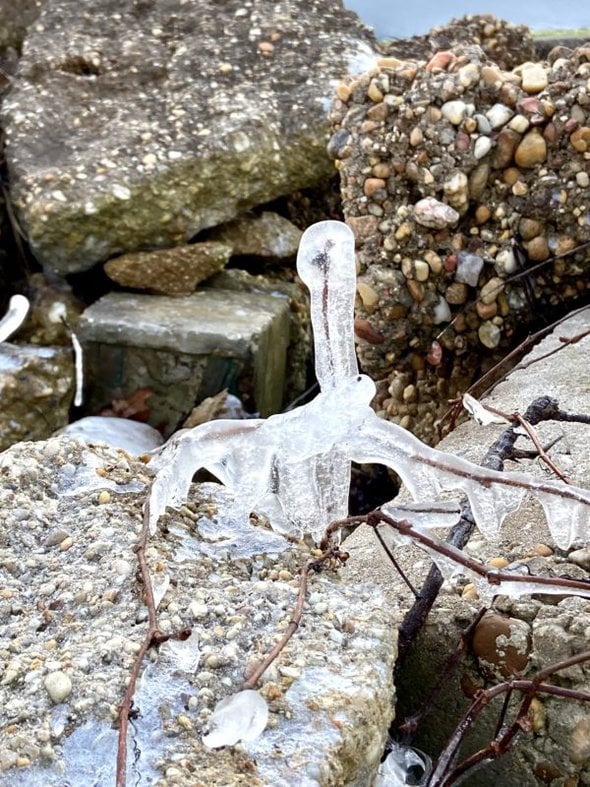 We had tons of rain followed by some very cold, windy weather, and a lot of people in my area lost power.

Ours flickered a few times, but we never lost it. Yay!

for the way Lisey and I get each other 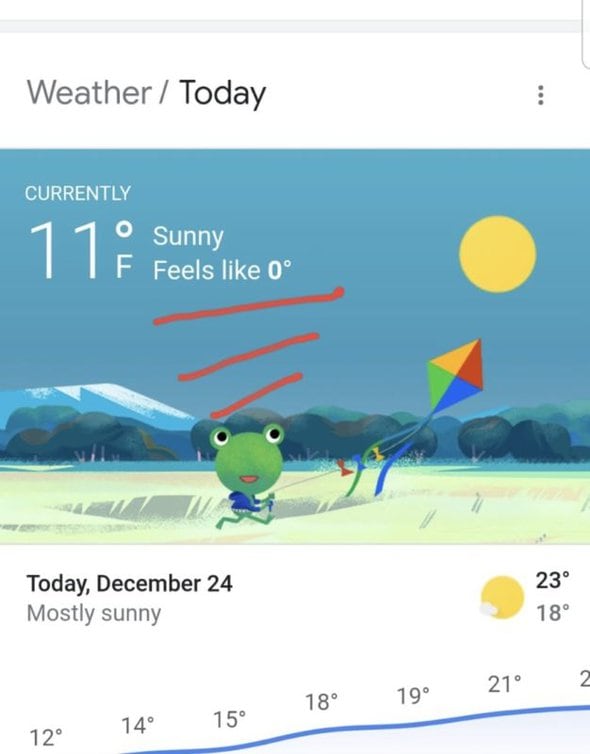 I saw this little weather graphic, texted it to Lisey and I said, “Whyyy is this frog outside? He’s going to get cold!”

And she said, “Omg, his mom knows better than to not wrap him up.”

Although now that I look at it again, I think pants are a more pressing issue. 😉

Anyway, I appreciate that I could depend on Lisey to focus on the frog, not the fact that the real feel outdoors was 0 degrees.

We understand each other. 😉

Heat pumps don’t work all that great when the outdoor temperatures are this cold, so I have been feeling thankful to have oil heat.

for a lasagna from a neighbor

On Christmas Eve afternoon, I was feeling a little bit overwhelmed, and I wasn’t sure what I was going to make for dinner.

Then my doorbell rang, and it was my neighbor, with a pan of homemade lasagna in hand. 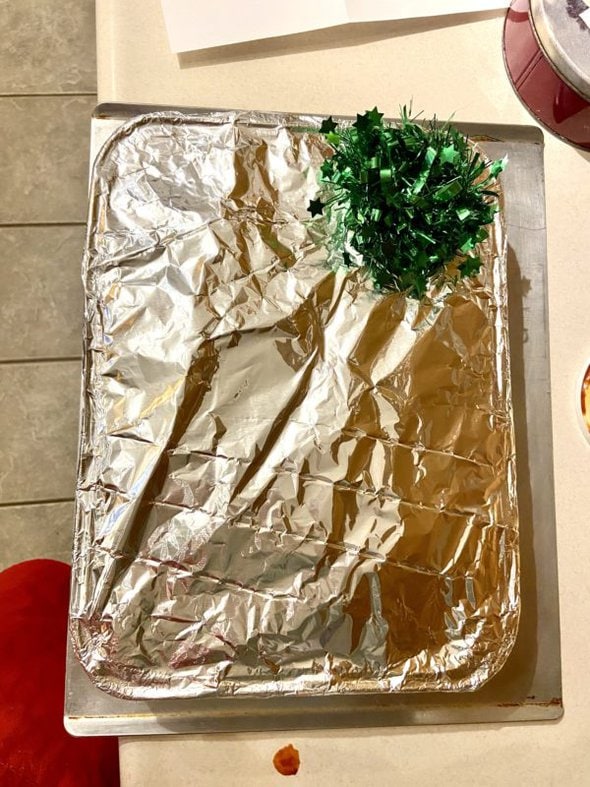 I almost cried, I was so happy!

for the beautiful ice I saw yesterday

I went to a new-to-me trail, which followed a creek. And since it’s been so cold, there was lots of interesting ice to look at. 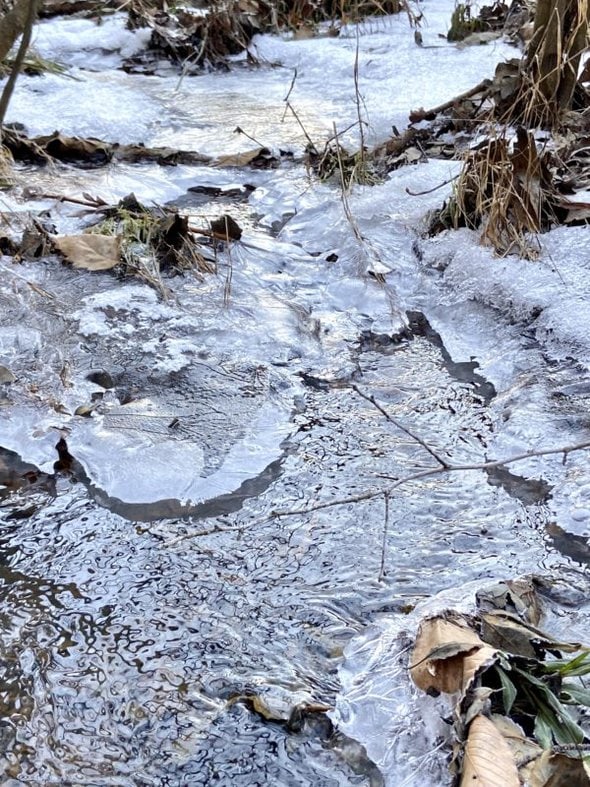 I love the way these tiny air bubbles are trapped in the ice. 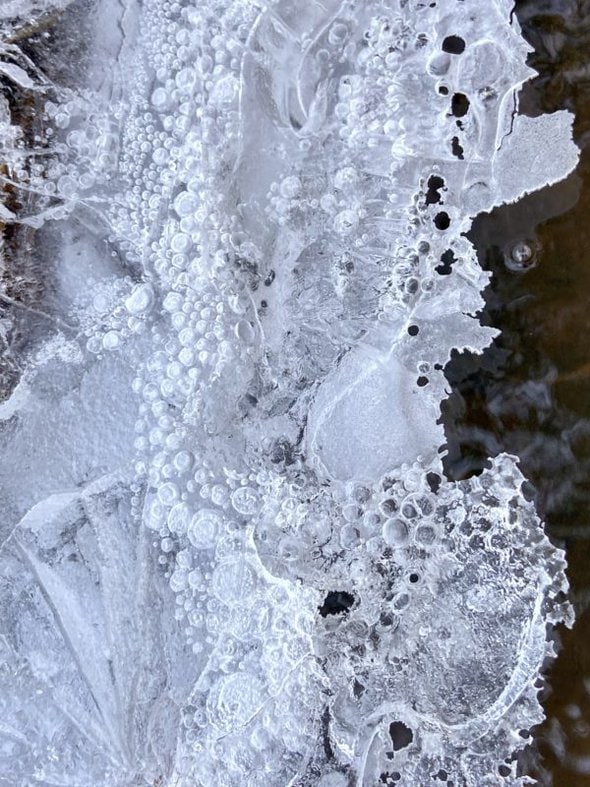 The day before, I walked another new-to-me-trail, where there was some beautiful ice that I think was formed by the splashes from the waves. 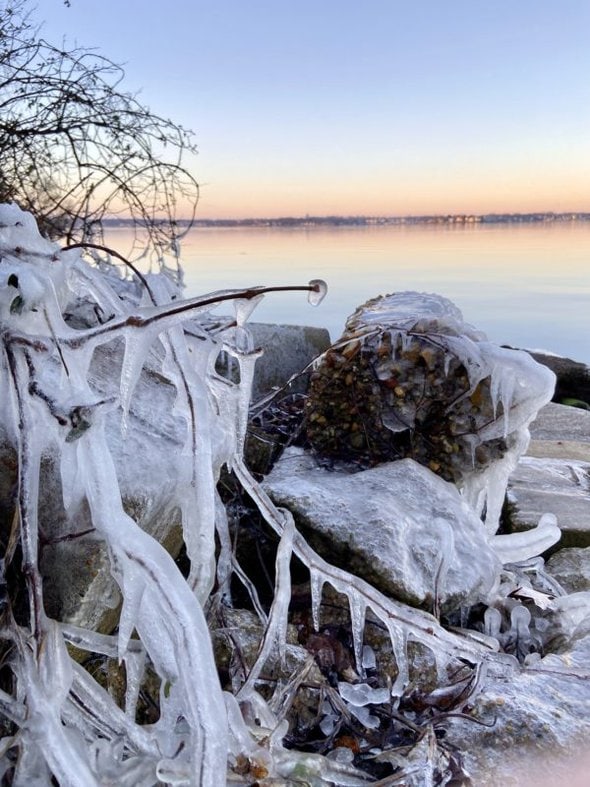 I love all the different ways that ice looks…I am always taking detours off the trail to go inspect it!

I found this ear warmer, abandoned in front of my old house a few years ago, frozen in the ice. No one ever came by to get it, so I took it inside, cleaned it up, and it’s been very nice for my chilly walks. 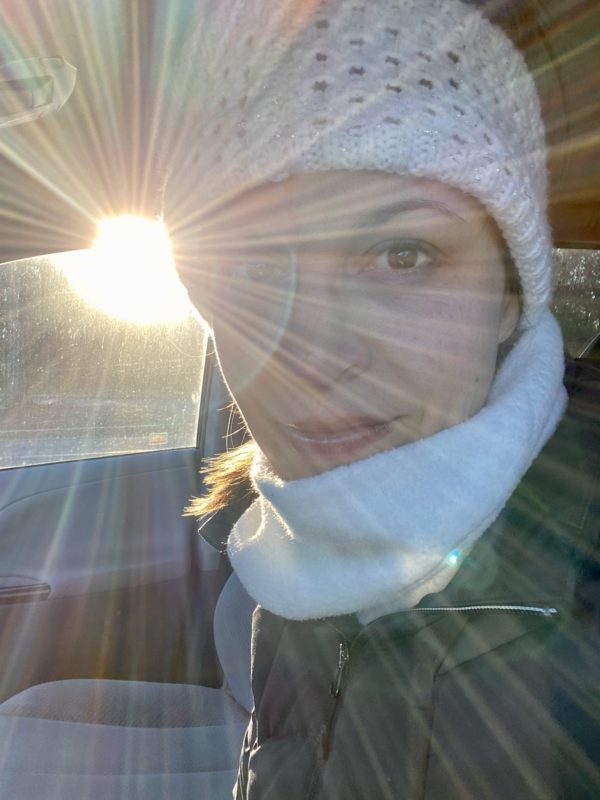 I like it for the ear coverage, of course, but it also keeps my forehead toasty warm. And I know in the photo, it looks like it would be a drafty piece of apparel, but it’s lined with fleece!

that Lisey passed both of her FAA tests

Now she’s good to go to head into her last semester of aviation mechanic school. Yay!!!

Not everyone passes these tests on their first try, so she is feeling super duper relieved. If you don’t pass them in time, you have to sit out a whole semester, and she really didn’t want to do that.

I’m really proud of her because she studied so hard for these tests; even on Christmas day she spent some time with her headphones on, working through practice questions.

for the first real taste of no-school rest

After my semester finished, I dove head first into Christmas stuff, so this week has been the first I have really felt the “ahhhh” of being off of school.

I am finally getting to catch up on a lot of tasks that I’d put off in order to study, and I feel happy about that!

Remember when my cousin was pregnant and sick and I went over every other week to do dishes and laundry and such for her? I remember feeling so happy that my very ordinary household skills were able to be so helpful.

I was thinking about that recently because I mended some of the puppets at the non-profit children’s museum where Sonia works; I took them home, laundered them, and fixed any of them that had issues. 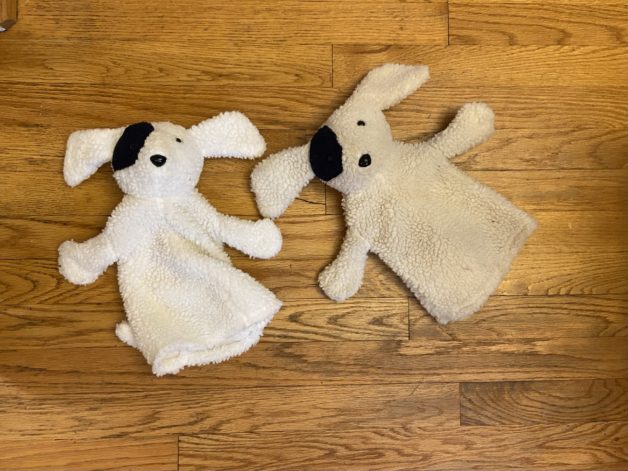 One of these has been washed and the other has not!

My laundry room looked kind of hilarious at one point because there were sheep, puppy, pig, and unicorn puppets everywhere. 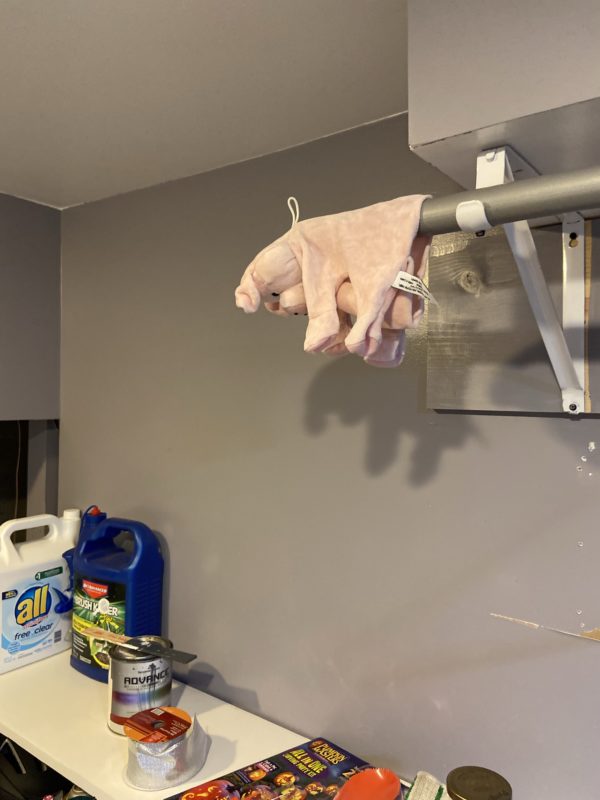 I’ve done all sorts of mending jobs over the years in my own home, and those skills came in very handy with the puppets. 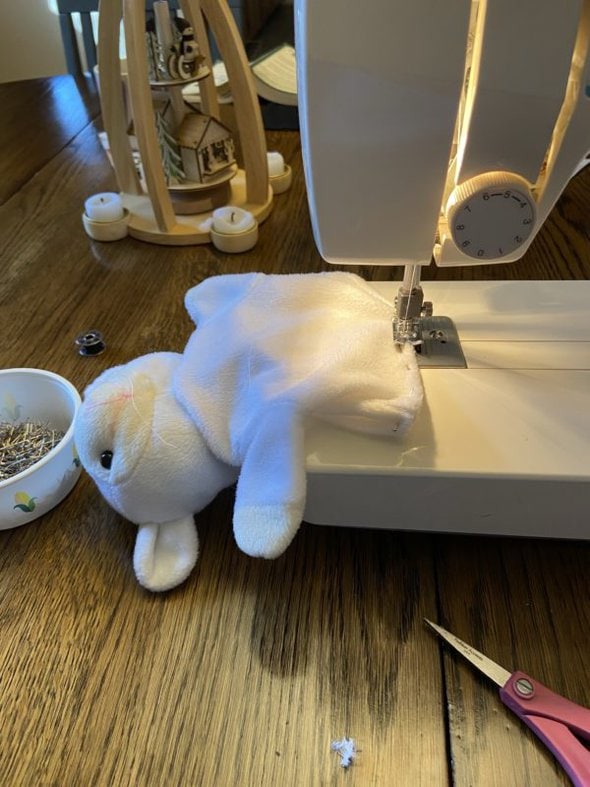 My painting practice is another skill that came in handy because I was able to fix a wall mural at the museum, and Sonia and I collaborated to paint a sign for a museum attraction (I did the letters and she made it look beautiful with her art).

Anyway, I think it’s so nice that almost any skill you have can be used to do something good in the world…even random skills like mending.

I’m thankful for your blog. We play “what do you see” in nature pictures and I see a fat frog in your ice from the waves picture which follows the theme of your frog needing pants ;-)

I just love your talented photography skills. You uplift all of us by including them in your blog. As a longtime employee of a fine arts museum, I applaud your work (and Sonia's employment) for a fellow museum. The puppets are adorable and non-profits depend deeply on volunteers to keep their doors open. This week I am thankful for those people who lift me up, especially my dear husband, who is always there to help in any way he can. He is witty and wise, cheerful and entertaining, too. I hit the lottery with him, big time.

I really love your list this time. Every mom needs at least ONE kid that gets her. (: I am sitting here in my empty (of people) house. And while I could feel sad about that, it is: clean warm and has a good dinner and a soft bed waiting for me. And thats just about everything I need right now. Happy New Year! https://cannaryfamily.blogspot.com/

Yes! I wouldn't want to be alone all the time, but there IS something lovely about a quiet evening in a cozy house by yourself.

Congratulations to Lisey. Good luck moving forward. I have gone nowhere since Christmas except to walk-- Monday: We walked at a new location. Tuesday: I stayed home so that my daughter could go do something for her in laws. Just to be here for the grandkids. Wednesday: The ladies and I had to finish up our outdoor challenge in the woods. It's relaxing. Yes, the ice formations were interesting. Rain raising the height of the water, hard freeze, and then reducing the height of the water, leaving ice behind. Thursday: My grandson and I did a walk in nature. Ice formations, swans, wood sculptures, waterfalls, and playground. The temp was in the low 50s today and it was sunny. Really needed to get out A Thankful Week.

Thankful for- The grands they are so much fun. The 3 year old will point to me and say grandma we will do this together. For very light traffic on our trip. The storm did not do much damage in our area. That the weather for the CBus Zoo lights was chilly but not cold. There was a bison really close to us, he was huge. That my dad in law accepted elderly care. I was hoping he would not say no to it. He really needs someone checking up on him more often.