Every week, I post a picture of the food that has gone bad over the last seven days. Why do I do this? Because in March of 2008, I finally got fed up with the amount of food I was wasting, and I thought that showing my waste to other people would motivate me to use up my food instead of wasting it. Because this often embarrassing practice was so helpful for me, I invited other bloggers to join me in posting their food waste photos, and Food Waste Friday was born.

This week I wasted some celery, a few grilled veggies, and sadly, some leftover roast pork. It was a pre-marinated pork roast, which I never buy, and now I remember why: we don’t really like pork.

Maybe if we had pastured fresh-from-the-farm pork, it’d be different, but as it stands, we’re just really not big fans.

Duly noted, won’t do that again.

On a happier note, I used up two kind of mushy apples by making some Apple Pfannekuchen. 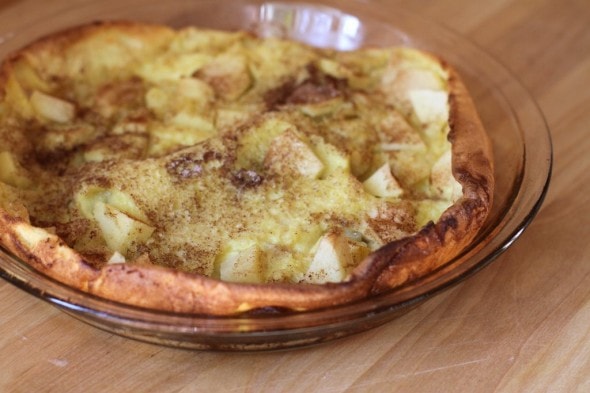 I didn’t have quite enough apples for the last pfannekuchen, so I baked it without fruit and then sprinkled some raspberries on top. It was totally delicious. 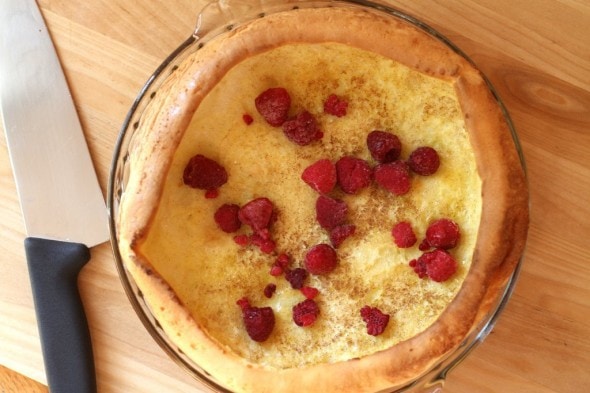 FYI, baking raspberries into the pfannekuchen doesn’t work because they give off too much liquid (I know because I’ve tried it before!)

How did you do this week?

I'm a single 100 lb gal. I'm not a big eater. I try to salvage food then end up not wanting to eat it anyway. So I end up wasting the food plus energy (electricity) and water during preparation and clean up. So if I would have gotten rid of the food to begin with, the result would have been greener. I used to have a single neighbor who would eat all my leftover soups, chilis, stews, ribs, etc. Wish he was still around! LOL My freezer is bulging with good intentions that usually end up in there for 6 months or more then gets tossed. I think I should shop each day and just buy what I need for that day. I don't really like leftovers. At one point I had a husband and a daughter. Now it's just me and it's hard to get into the habit of prepping small quantities. Kind of hard to make vegetable soup for one without leftovers. Enough of my rambling. I do manage to save my herbs, though. I separate half for the fridge and dry the other half so there's no waste. I don't waste produce much either. It's just the prepared leftovers and cooked meats that I have a problem with. Thanks for the postings and ideas!

I don't understand what you're trying to say? How are you wasting the food plus energy and water during preparation? If you already made it, then it's already there and you are only saving food and energy by eating what you have already made and not making anything else.

As for the soup, have you tried freezing it? I always make double batches of soup with the intent to freeze the extra for later in single serving portions. I don't consider them "left overs" because I actually freeze before I eat. I find cook meats also freeze well.

Found me some hairy cherries. Ever tried one? Me neither.

Not a great couple of weeks for me. But we have now picked up from our CSA three times and haven't wasted a lot. Some of these ingredients, I am just not familiar with and have some trouble finding ways we like them. Kale has been the main challenge. None of us liked the kale chips at all, so they went to waste. The pasta dish with Kale my hubby and son liked, but I wasn't so fond of. Then we received kale a second time from the CSA and the second pasta dish I did like, but have no idea what the difference was. The kale wasn't bitter this time.

So we wasted some broccoli rabe and lettuce, when I was sick and not up to cooking. Wasted about a 1/4 cup rice. I usually use rice in my taco soup or for burritos, but didn't manage to do so. Yes, I know I can freeze rice, but had every intention of using it, then when I went to use it, I sniffed and it just smelled bad. I know there was a bit more, but can't remember what it was.

Overall, though the CSA is working out well, and we aren't wasting much. As long as I don't get sick and don't pine for recipes that don't use the CSA ingredients too much, we seem to be fine. The Swiss chard, turnips, and other stuff hasn't proved as much of a challenge as the kale. Let me know if you have any farmer's market recipes for what we are receiving or what we will receive as the season goes on. This CSA thing is a learning experience!

You can de-bitter the kale by parboiling it in salted water for 2-3 minutes before cooking it. I love making a sweet-potato and kale hash topped with eggs for a big breakfast. Tear the kale into smallish pieces. Parboil and drain the kale, squeeze it lightly or let it set in a collander to drain most of the water without crushing it. Dice some sweet potato (winter squash works ok too), sautee with the parboiled kale, pepper and spice to taste. Toss in some shredded cheese if that's your fancy. Top with poached or fried eggs and enjoy the beautiful bright green, orange, and yellow delight :)

I love hearing about how you rescued almost wasted food!

I remember a few years ago you did a food waste post while on vacation. Did you also do a vacation menu plan? I seem to remember one but can't find it using the search function. We are going on our first week long vacation and I wanted to try cooking on this trip to save money. Thanks.

I looked and couldn't find any either! But these two posts have some vacation meal ideas in them: